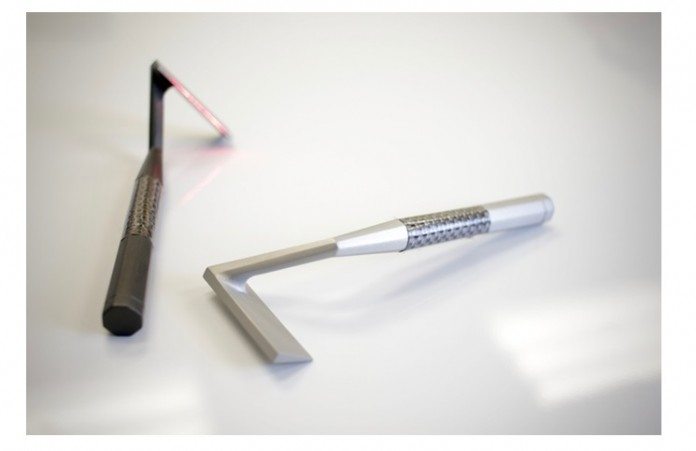 For anyone who has read my Braun 9040s article, you’ll know that I’m a fresh convert from ‘lazy bearded bloke’ to ‘daily shaver’, but the everyday act of removing hair from ones face hasn’t really changed in millennia. Yes, you can remove the hair with wax if you like pain, but for the rest of us it’s still a case of using some form of blade to cut the hair whilst also trying not to cut yourself.

Technology has of course helped… I haven’t cut myself yet with the Braun and I don’t really expect to, but surely technology can make it more convenient, safer, faster and cheaper than that shaver and those like it.

And that got me thinking… What would be the next big EUREKA moment for shavers? Would we have to wait for some kind of beard-based implant that you can control with your iPhone? Or what about teeny, tiny nano-bots, crawling over your face styling your manly growth throughout the day so you never look unkempt, colouring each strand of hair and trimming them with lasers.

I might have had too much coffee by that point, but lasers to cut hair are actually a thing and will soon be available to everyone. Welcome to the future!

Yes, the Skarp Laser Razor is in development and backers are being invited to grab the first ones in a Kickstarter campaign. On a side note, if you watched that video and didn’t make ‘hummmm-vwoooom-zwooozshhh’ sound effects then get off my Facebook friends list, hehe. Back to reality though because this isn’t all sci-fi and wishful thinking. Morgan Gustavsson MBBS, one of the co-founders of Skarp Technologies, invented the Intense Pulsed Light (IPL) in 1989, and it’s still used for hair removal and dermatology treatments.

The team, which also includes co-founder Paul Binun, have made a breakthrough after over a decade of research, finding a specific wavelength that allows the Skarp Laser Razor to cut through all hair because of a specific particle contained within that everyone has, no matter what ethnicity or colour. This is quite a step as previously lasers would not cut through light or grey hair – quite a problem if you’re trying to market a razor. With that barrier out of the way though the doors are wide open.

The Kickstarter campaign has already more than doubled its initial target with around three weeks left to run, you can pretty much guarantee that it’ll be coming to bathrooms all over the world soon. The expected date for delivery of the Kickstarter rewards is March 2016. The Skarp Laser Razor promises to be safe to use as it will only cut hair and not your face, as well as being kind to the environment. It can be used with or without water and runs off a single AAA battery which should last about a month with normal use.

I really am excited by this campaign, what about you? Would you shave with a laser or is low-tech good enough? If shaving isn’t your thing, what other mundane chore would you change with a technological breakthrough and what would that breakthrough be?

Paul Davies - Oct 28, 2019 0
If you haven’t been living under a rock for the past few years, you are aware that online games moved from a fun after-homework...
Go to mobile version
%d bloggers like this: