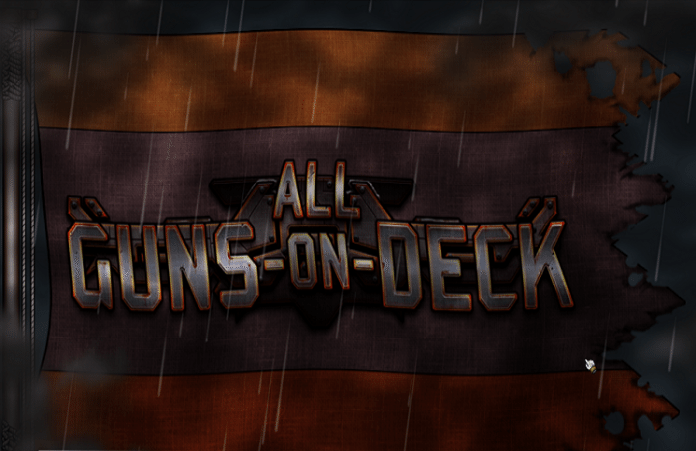 All Guns On Deck describes itself as a naval strategy, real-time tactics action RPG with a unique battle system and an unforgiving world to conquer. The player takes control of a naïve young sea captain, eager to take to the waves to fight on behalf of the great nation of Eutopia. Essentially the game is a side-scrolling arcade shooter based around your choice of ship, with crew management thrown into the mix to make things a little different. This adds a whole new level of difficulty to the game, as you need to ensure you are both monitoring the action, but also the status of your ship.

With the game being in an early in its development, there are a number of things that stand out as just being unfinished. If you are able to overlook these features for the present until they are implemented, the game itself is actually quite fun. Since its Early Access release on Steam on 28 Aug 2015, there have been 2 patches to the game. The developers seem to be fairly active on the Steam Discussions page taking on board feedback and offering insight into upcoming changes and patches to the game. The game begins with a character customisation screen, which allows you to assign your gender (of which only male is available at present), your skin and uniform colour. On the right-hand side of the screen, you get to bring along 4 starting chips which I will discuss in more detail later. Once your character is created you are transported to your ship which is under attack from an “Orb”, which rises from the ocean and fly ever menacingly in front of your ship. This mission is the tutorial which quickly explains the basics of the game and ultimately leads to the destruction of your ship, and the start of the story. You wake up outside the medical bay and have control of your character which controls as a point and click style section of the game. I have found that there are some routing issues and you have to guide your character around the map rather than just click on his destination and let him find his own way there. I found this section of the game extremely dark; as the port is overcast in shadows regardless what time of day you visit it. Your first port of call is the construction yard, to assign your current ship and weapons, then off obtain some crew from the barracks and finally set sail. Once on the open ocean we are greeted with the map screen from where we get to control our ship; again it is still controlled by point and clicking a node you wish to travel to. Once selected the ship automatically goes to the destination, if the node is red this indicates that there will be an enemy presence at this location with a number indicating how many waves of enemies will be present. For the first few fights the objectives are to assign the crew you have available to their roles, depending on the assigned location depends on their actions aboard your ship; from firing and reloading weapons to repairing the ship during combat. Once the waves of enemies are clear it is best at this point to head back to port to stock up on more crew until the maximum capacity for your ship is reached. The combat itself is very straight forward but oh-so-difficult at the same time, you can let the AI take control of the weapons while you manage the locations of your crew, of if you prefer a more manual touch you can control the firing of the guns by holding space and aiming and firing with the mouse. The enemies that I have come across mainly consist of varying sizes of aircraft, which when shot down have a chance for the pilot to eject and land on your ship. This means you either have to shoot him down while parachuting or click on him after he has landed on the deck of the ship to destroy him.   If your ship is destroyed during combat then you will find yourself back at port, with no negative effects other than losing out on any bounty earned during the battle. You can make your way back to the node and continue the battle from where you left off. With the bounty you earn you can purchase chips, chips are effectively an item or a skill. They come in various shapes and guises such as bigger and better ships, new varieties and also improved weapons, or boosts and skills that can be used during the thick of battle to help when outnumbered on the open seas. There are also a number of cosmetic upgrades that can be purchased which change the design for the crosshairs to allow you to customise it to one you may prefer. Depending on which screen you are currently on the music changes accordingly, this was fresh at first as each have a very different feel to them, however after being on the same screen for a while the music loops and there is only one track per screen. However when in combat you have the constant firing of weapons, with each variety having its own distinctive sound, I feel that they have done well with this as it adds to the intensity of the battle, with each artillery shell booming and the constant machine gun fire drawing you in.The graphics at first glance are rather basic; the game takes on a 2D cell shaded style, so I wasn’t initially blown away with stunning visuals or awe-inspiring scenery. However as I progressed through the game I feel as though I have come to respect the graphics more than first impressions. Each ship that I have come across is different from the last; everything is crisp and well-drawn. When looking through the weapon upgrades there is a clear progression that can be followed. Each weapon in the same class follows a similar design but also has been changed enough to instantly show that it is more powerful, be it an extra barrel or a larger cannon. So far I have seen a few examples of the weapons available and each is instantly recognisable for what it is, with each having its own unique visual effects.

Yes there are things that don’t work, such as the port area being too dark; however I believe that this will change throughout the development of the game. With the developer seemly being very interested in player feedback and making changes according to discussions happening on the forums. Another thing I did notice was that when assigning weapons to the ships there is a section of the screen designated for weapon stats, which at this point in development hasn’t been implemented, as it remains blank when guns are assigned to the ship. All Guns On Deck in its current state is a game which I can honestly say surprised me, I started the game and after completing the tutorial I felt that I still had no idea what I was supposed to be doing, I ambled around figuring things out for myself. At first I would have preferred to be taken by the hand a bit more, to be given more explanation, as to what certain things do, and where you need to go. But reflecting back on it, learning this for myself after dying countless times on the same combat node to then finally succeed I feel that I have accomplished something. I have since gone back and started over, and now that I know what I am doing I feel this game is something that I can sink a few hours into if I wanted or even just jump on and play 10-15 minutes and be done for the day.

My only gripe is its current price, £9.99 for the game in its current state in my opinion is a little expensive, given that I have noticed a few typos in the in-game text and some of the menu features are not yet implemented into the game. However if the game continues to develop and has all features implemented then I think this is a fair asking price. All in all the game is fun to play and I would recommend buying it once it has been completed, however with all early access games if you back it now there is no guarantee that it will lead to a fully completed game, so please bear this in mind before buying.

Melissa Hadfield - Jul 11, 2016 0
Warhammer meets Total War at last. Orcs, Dwarfs, Vampires and Greenskins face off. But is it worth fighting for?
Go to mobile version
%d bloggers like this: