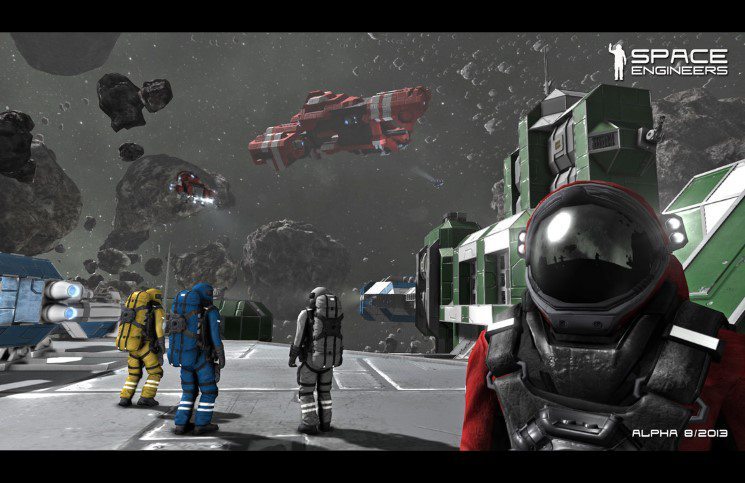 Space Engineers is an outer space sandbox building game about engineering (surprise!) and managing constructions. Players are able to build spaceships and then fly them around in a fully three-dimensional space, as well as constructing larger structures, such as bases and space stations. Players can also mine asteroids for raw materials (which are used for construction on Survival mode) and fight each other on multiplayer. This is all managed using Space Engineer’s volumetric-based physics engine and is completely customizable with the sandbox settings.

Both Space Engineers and its medieval twin are still in the stages of early access, meaning that it’s not quite finished. And that shows. With that being said, it’s still a very fun game. In this game you can build space stations and spaceships, you can even hop on multiplayer and wage battles against your friends and their creations, either keeping everything easy with the creation mode or adding resource hunting to the mix in the game’s survival mode. Either way, it looks like Space Engineers is more developed than Medieval Engineers.

When starting my first single player creative game I was immediately overwhelmed with the objects I could build and the complexity of some of those objects. At first, I thought that this could be an issue with the lack of an in-game tutorial, however the video tutorials that Keen Software House have provided on Steam can be effortlessly and seamlessly be accessed while playing with Steam’s overlay UI. These tutorials turned out to be incredibly helpful and made me feel well informed about everything that was possible in the game.

There are two single player modes for space engineers: survival and creative, both of which are customizable. Generally speaking, however, survival requires materials and time to be able to build your creations, and dying is a distinct possibility. Creative mode, on the other hand, allows you to build things instantly without resources, and you cannot die. You can customize each to mix the two, implementing different features to create your own mode. I enjoyed tinkering with this feature. The next thing I did was to test out the controls. I found walking, placing objects and interacting with objects were easy to understand and to use, especially with the little reminders that appear in the middle of the screen that tell you what buttons to use with an object when looking at it. However when I got to the points of flying around with my jet-pack and with spaceships the controls became awkward and a little difficult to get the hang of, which was disappointing due to it being such a big part of the game. These controls became an especially big issue when it came to the combat element of the game; spinning around to try and shoot an enemy behind me and then ending up upside down was more than a little bit irritating.

Other than the flying aspect of it the combat actually worked very well and added to the fun and immersion of the game. There was nothing more thrilling in the game than going to mine an asteroid and finding that it is already occupied by enemy space engineers. The weapons available fit seamlessly into the game as extras for your ships and defences for your space stations, although I did find it a little disappointing that you cannot directly control all weapons. But as a whole I definitely enjoyed the combat in this game. I expected to go into the multiplayer of this game and find wonderful creations or awe-inspiring space battles, but instead I found it to be almost completely empty. I did try join servers which had people on them but our paths never crossed. I did find a couple of half built space stations, but their creators were nowhere to be found. This is a shame as it meant I could not get a good picture of the possibilities for multiplayer, and I played single player I had imagined it being a great game to play with lots of people, both working with and against each other.

Space Engineers, however, is an early access game and being such you have to expect there to be issues that need to be ironed out. Despite this, I found there to be fewer glitches than I would have expected, and it also did not have that feeling of something being missing or things not quite being integrated correctly. Most features were integrated smoothly and added to the immersion of the game. I had no issues with any lag or glitches, so overall it worked really well.

The audio fits very well, it inspires excitement over space travel and everything that you can do in the game. However, after about thirty minutes I realised that the music was on a loop. I would have liked for the music to change to something more foreboding during combat, but with it being an early access game I didn’t expect much more than was provided.

With the game being set in space there isn’t much to show other than asteroids and your creations, which look great. However, the background of the single player looks like an image of space that has been taken from the internet and just stretched all around as a background. It’s not even the best quality of image. Any modded lobby that you can join tends to have a much nicer one, and that slightly ruined the immersion in single player for me. There are times in this game such as building things and during combat where I think this game deserves its nearly £20 price tag, but then when I look at the background image and when I have issues with the flight I seriously doubt this. Overall the game is incredibly fun to play and I imagine it doing very well once it’s issues are sorted and it’s completed, especially in the multiplayer area. I’d definitely recommend this game to play, especially due to the fact that it’s very immersive and the features work especially well despite its early access status.