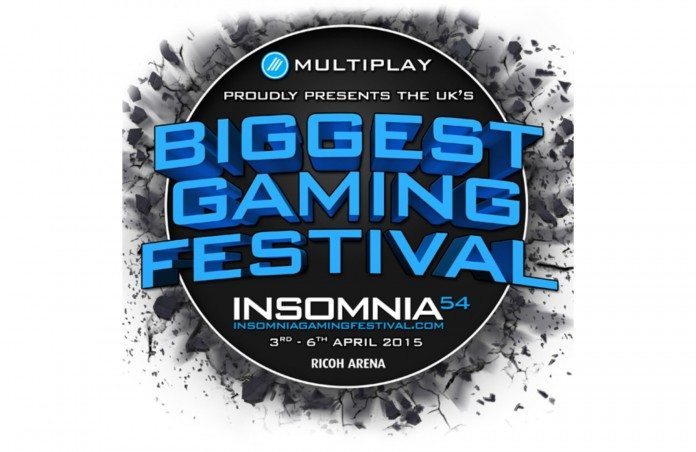 Insomnia is the biggest gaming exhibition in the UK. Held at the Ricoh Arena in Coventry, it hosts a wide range of exhibitors, such as MSI, Logitech, Overclockers, Ebuyer and many more, all of them boasting the latest hardware.

It’s nice to wander around and see what’s on show and to play around with all the shiny technology. There are also lots of games on demonstration, including Project Cars, CS:GO and Rocket League. Naturally we spent most of our time hogging the Logitech CS:GO machines, especially as they had their absolutely gorgeous G910 mechanical keyboard on display. As well as the various exhibitor stands, there were many “famous” Youtube faces at the event (Yogscast, Syndicate and AshleyMarieeGaming, to name a few), and they were doing various demonstrations and community engagement events.

Walking around to the Kayam Tent and you find yourself in the Retro Zone where there is a collection of consoles from eras gone by. This made me appreciate my gaming roots a little more. Got to play with a Sega Saturn, Atari and Megadrive.

We followed the tent to the Indie Zone where we saw some impressive upcoming indie games on display. One that really impressed us was “The Town of Light” by LKA. The game is described as a Phsyco Thriller that takes you back to your past in an Asylum that was shut down in the 1970s. The graphics are just amazing and the game supports Occulus Rift, so for a small development company, the developers certainly are heading down the right path. We were lucky to meet with graphic designer Leo who gave us a brief overview of the game and then let us jump right in. All I can say is, if you like the horror scene, then i’m pretty sure you’ll fall in love with this one. See the trailer below if you want to see more. Also if you like your indie games in general, be sure to check out Skara and Kingdom Fall.

Now onto some bad parts: when we arrived initially there was a long wait to get checked in (as press members) and there seemed to be some overall confusion regarding the times. As you can appreciate being the UK’s biggest gaming event, it was extremely busy throughout. Too busy for my liking; it felt like the arena was going to burst at the seams, and there was no real effort at crowd control or flow. Same thing applies as you head out to the food stands outside. Big thanks to the lady who bought pizza for her kids that no longer wanted it, who then proceeded to sell it to us at the back of the queue. You are a legend.

Also the on site ATM was constantly broken throughout the weekend which means if you needed some cold hard cash, it’s about 15 minutes walk to the nearest Tesco. It took a while for Multiplay to stick a sign up to say it was broken too. We saw quite a few people trying to use it and then cursing afterwards.

My biggest bug bear of the weekend, was the security arrangements. From beginning to end it was a shambles. People trying to enter and exit between a space that had been made between a couple of tables. A poor idea in my opinion (this was situated near the VIP/Press and Exhibitor check in) which meant this area was insanely busy anyway.

However it gets worse, we saw several incidents where there were security guards generally speaking and treating guests in an abysmal manner. One that strikes me particularly was when we were walking through to the main stage and a guy with his kid walked in through an exit by mistake and was pounced on by someone that I would call nothing more than an absolute bully. The guard was shouting at the poor guy in front of his kid. This made all of us shake our heads. In fact we experienced it ourselves: our own Rebecca was walking heading past the VIP Lounge after a quick toilet break and without warning was shoved to one side by another guard to the point it made her fall over. No apology, no asking if she was okay. The reason for it? Not sure who it was, but they were escorting a streamer back to the lounge. Now I appreciate there are hundreds of kids screaming and giving chase, but damn, at least give our staff chance to get out of the way. When Gavin and I found out, this made us fuming. To be honest I was almost ready to walk out. Not our fault that Multiplay can’t contain a crowd. We heard similar stories from other guests too. We approached Multiplay for comment and have yet to receive a response.

Although the majority were well behaved, there were far too many children running around, barging into people and generally causing a nuisance. This seemed more prevalent after one of their idols had been on stage. Again, no real effort to contain this.

What didn’t help was the way the Jaguar hall was organised, it was far too small and exhibitors packed like sardines. On the Saturday it was extremely hot inside the hall. In the end we tried to avoid the area as it was just too busy.

I will say, we got to meet a lot of interesting individuals and I’d like to give a big shout out and huge thanks to the following people for making us feel so welcome:

MSI, Logitech, Mid Life Gamers and Game (specifically Josh—you and your beer budget were immense). Good job guys. To be fair generally everyone we spoke to was pretty cool, but I felt like those guys needed a specific mentioning.

The Most Popular Types of Mobile Apps on the Market

Tim Mammatt - Oct 20, 2017 1
Whether you consider the increased popularity of smartphones to be a trend or epidemic, there's no denying that as a population, we are spending...
Go to mobile version
%d bloggers like this: