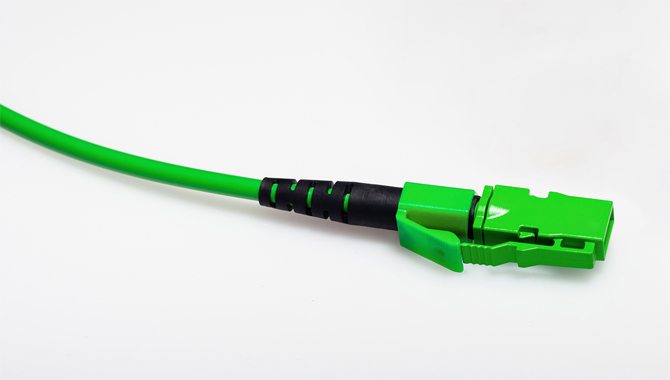 Intel has announced a new data cable that is capable of moving data at speeds of 800Gbps.

The cable is based on Intel’s Silicon Photonics technology. It is green and will use the MXC connector, which is smaller than the standard Ethernet cable connector. The new data cable is said to use 64 fibres, 32 for receiving and 32 for transmitting. Each fibre will be able to move data at 25Gbps so that means each cable is capable of moving 1.6TB of data per second, 800Mbps receiving and 800Mbps transmitting at a distance of up to 300 metres.

The fibre is made of Corning’s ClearCurve* LX and has a wavelength of 1310 nm. It also has 1/10 the bend radius of normal fibres so will offer reliable operation even with sharp bends due to routing the cable in and around server racks.

The MXC Connector (Not an acronym) will of course support 64 fibres operating at 25Gbps as mentioned above. The MXC Connector uses lensed connectors to carry light from one connector to another. This will allow for 10x the immunity to dust over normal connectors that use physical contact.

Craig Bartlett - Aug 2, 2017 0
The Fractal Design Define C TG Series is the perfect solution to satisfy this balance of capacity and efficiency while opening up the side thanks to a full tempered glass side panel.
Go to mobile version
%d bloggers like this: