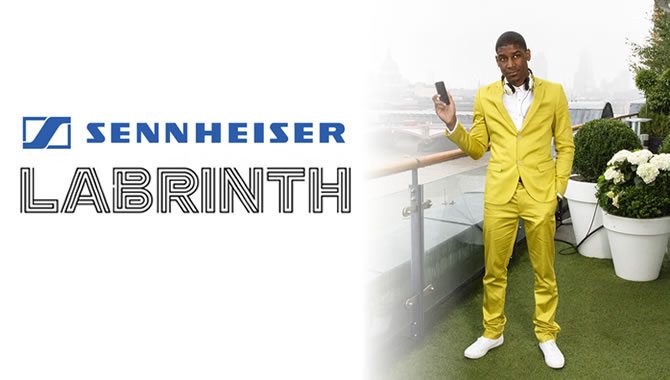 London, 10 September 2013: Labrinth went to new heights to launch ‘Project Noise’ from one of the capital’s most iconic buildings, the Oxo Tower with the unmistakeable London skyline as a backdrop. The campaign, led by Labrinth in a partnership with Sennheiser UK will capture original sounds from across the UK which Labrinth will use to create a one-of-a-kind experimental track to be launched later this year.

Labrinth is teaming up with Sennheiser for a second year following the success launch of Masters of Sound in 2012 which saw the artist collaborating with inspiring songwriters. This year the Masters of Sound ‘project noise’ goes wider – by using the world’s leading social sound platform, SoundCloud, Sennheiser and Labrinth will ask the public to record and upload familiar sounds they hear and record from their everyday lives; offering everybody the chance to contribute to something truly original.

The sound of beeping buses or the neighbour mowing the lawn might not be something fans of Labrinth’s would expect to hear on one of his chart-topping hits, but this diversity is the core of Project Noise. Labrinth collected the first of the sounds today in the capital, but needs a diverse range of noises from across the UK to capture enough of the most beautiful and bizarre everyday sounds to complete the track.

The campaign, inspired by a piece of research from Columbia University called the Million Song Dataset* aims to address the decline in the timbral variety in modern music. Labrinth’s track will use the sounds submitted by the public to create an original track, which pushes the norm that popular music falls into – taking listeners outside of their popular music comfort zone to challenge the norm.

Dr Lauren Stewart, Reader and co-director of the MSc in Music, Mind and Brain at Goldsmith’s University who is working closely with Sennheiser on the campaign comments “Whilst timbral variety is not the only factor that contributes to the creation of new music it certainly is a big factor, and since the 60s we have seen a significant decline in timbral variety and therefore the diversity of different kinds of sounds appearing in songs.

The Dr Stewart continues “Modern composition and recording techniques make it simpler to compose certain song structures so producers are recording fewer original sounds. So not only is music sounding more and more the same creatively because we know what will make a hit, it is actually the same sonically. ”

The public are invited to take part by visiting SennheiserUK on Facebook, where they can find out how sounds can be captured, uploaded and submitted to Sennheiser via a mobile, tablet or desktop. Labrinth will then choose his favourite sounds and forge them into something special ahead of an exclusive unveiling on Spotify later this year.

“With ‘Project Noise’ every sound presents the opportunity for me to create something fresh and different. There’s so much around to collect and use, but I need the nation’s help in finding it. Source it, submit it and watch me do my thing” explains Labrinth.

“For more than 65 years, the Sennheiser name has stood for true sound in every aspect of recording, transmission and reproduction, so it would be fair to say that we are fascinated by sound. By enlisting the help of the public with Project Noise, we’ll embark on a journey together to capture a broad variety of everyday sounds using them to create a truly original piece of music.” says David Morris, Direct Marketing Manager, Sennheiser UK.

You can find all the latest information on Sennheiser by visiting our website at www.sennheiser.com.

* The research shows that certain popular songs charted over time since Heartbreak Hotel show a peak in sonic experimentation during the sixties and a gradual decline in this ever since. Modern composition and recording techniques today make it simpler to compose certain song structures, meaning that popular music has naturally taken on a successful generic formula.  Source: The Million Song Dataset, http://www.columbia.edu/~tb2332/Papers/ismir11.pdf