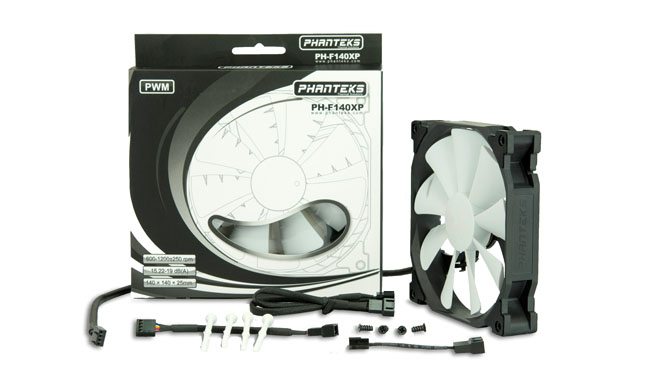 PH-F140XP’s nine blades with MVB feature produce powerful yet silent downdraft airflow. With the UFB bearing, composed by MOSS and SSC systems, long lifespan and rotation stability are made possible.

The new redeveloped blades in PH-F140XP Series are angled lower to achieve higher air pressure. The redesigned MVB blades generate better airflow and produces better performance. It improves the balance of airflow and air pressure when using with as a case fan.

The new nine high pressure MVB blades are precisely angled to generate a silent controlled airflow. The blades produces a downdraft vortex allowing for greater amount of air passage through and reduce airflow turbulence across the surface of the blades to create significantly better performance and airflow while keeping noise to a minimum.

Composed by MOSS and SSC systems, Phanteks’ UFB bearings have an effective hub-tip ratio to achieve a state of equilibrium reducing air and vibration noise. SSC provides an increase in the bearing’s lifespan and ensures that the fan’s axis is consistently operational and quiet.

Availability:
Available at most local retailers.

Paul Davies - Sep 24, 2018 0
If one of your life goals is to become a professional gamer, you will have to work towards the task day and night. Whether you make money from your ventures is a whole other story, as some take to YouTube in order to achieve this dream, and others do it via their gambling opportunities.
Go to mobile version
%d bloggers like this: