Intel have finally detailed the desktop 10th gen “Comet Lake” lineup, and it’s mainly as expected with a few surprise features. The new chips provide performance improvements across the entire stack, and work with new 400 series chipsets. Enthusiasts have been anticipating this lineup for a long time – the i9-9900K launched back in 2018 and is well due a successor. We’ve also had laptop Comet Lake chips for nearly a month. 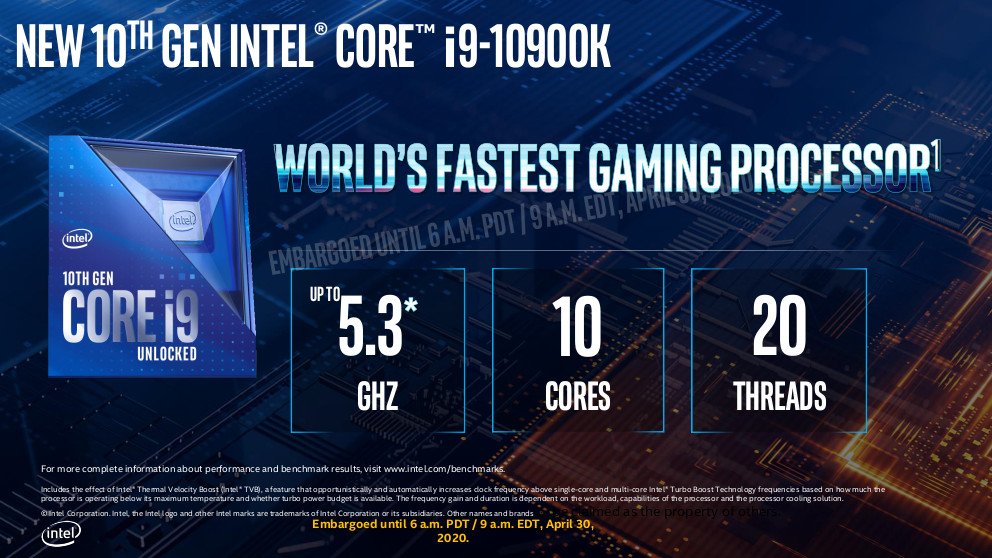 On the top end of the desktop Comet Lake lineup we see an increase in core counts to 10 cores (20 threads) on the i9-10900K, which comes in at the same price as the previous i9-9900K. There are also clock speed bumps and a more aggressive boost setup that’s starting to echo AMD, with Intel saying it’s best in “bursty” workloads. In a single-threaded workload, with temperatures under 70C, the i9-10900K can boost all the way up to 5.3GHz.

These chips come with a familiar claim – “World’s Fastest gaming Processor”. Intel’s basis for this is that they have tested the top-end i9-10900K against last generation’s i9-9900KS and AMD’s Ryzen 9 3950X. The result is apparently that the 10900K “scored better on the majority of the 25+ game titles tested”. This suggests it might be a close battle this time around, and independent reviews should be interesting. Cooling for the test setup was specified as “Water Cooling”, so presumably the performance included the effect of TVB.

Max Boost for the i7 and i9 SKUs includes Turbo Boost Max 3.0 and Thermal Velocity Boost. That means max boost speeds can be hit on the two best cores, with a temperature below 70C, when power limits allow. Above Comet Lake’s 70C spec for thermal velocity boost, speeds drop by 100MHz.

Intel haven’t disclosed full cache numbers yet, which is why you won’t find them in the spec tables, but the i9-10900K has 20MB. For comparison, the 9900K had 16MB of L3 cache. This probably means Intel are keeping their L3 cache proportional to core count, with 2MB per core. To be clear though, barring a big undisclosed change Intel’s L3 cache is shared. The count might be 2MB/core, but a single 10900K core could use all 20MB.

An interesting way to look at these chips is in comparison to previous generation offerings at the same price point. Many desktop Comet Lake chips share the price of their Coffee Lake counterparts, so this isn’t too messy. We’re ignoring the old -F chips because they were priced on paper alongside the iGPU-equipped options.

At the same price point, Intel give you not only higher clock speeds but more threads. The i7 range, which previously had HT disabled, gets it back for desktop Comet Lake. The i9 range gets two more cores, going from 8c16t to 10c20t.

Again, we can easily compare the old to the new;

The new lineup gains 100-200MHz, and hyperthreading. Disappointingly though, Intel haven’t announced an unlocked K-series i3 yet. Last time around the unlocked i3 came after the broader launch, and initially only in the -KF variant. So, there’s still hope for an “i3-10350K” in the future.

The comparison in this segment is very straightforward. The bottom of the new Comet Lake desktop stack gives you 200MHz more for your money. We should note that while the -T chips were always 35W, regular SKUs have been bumped from 54W to 58W.

Sadly none of Intel’s budget offerings are overclockable. We recently took the AMD Athlon 3000G for a spin, and it saw big gains from a comprehensive overclock. There’s also an ongoing overclocking competition based around the 3000G. Now that product segmentation is achieved by core count, it’d be nice to see unlocked budget chips on the Intel side. 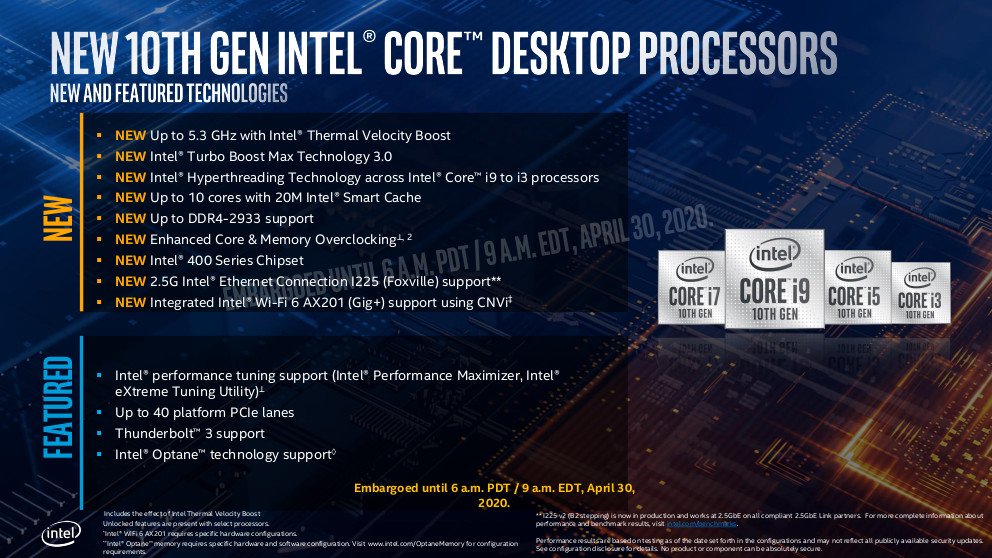 Let’s be honest – we all knew a 10-core i9-10900K was coming. There were however some things we didn’t see coming, and some expected but welcome features. This launch is more than a bump in core count and clock speed. 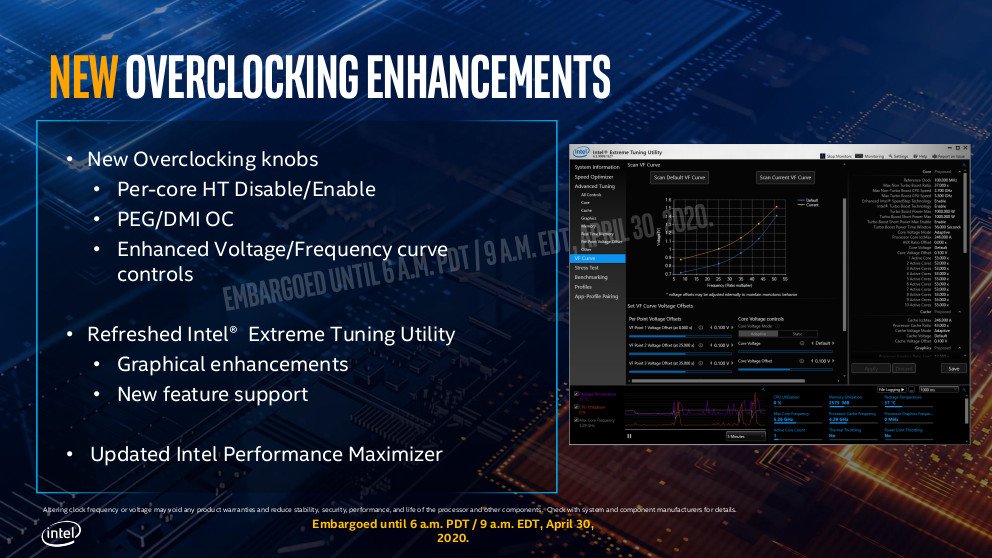 First, Intel have introduced the ability to enable and disable HyperThreading on a per core basis. For example, you could set up a 10900K with 4 of its cores taking one thread each and the other 6 servicing 2 threads each, creating a 10-core 16-thread setup. We’re not sure exactly why you would do this, but you can’t do it on AMD. Perhaps if nothing else it could help limit the heat output on the hottest individual core.

There’s also the introduction of “PEG/DMI OC”. PEG stands for PCI Express Graphics – the PCIe link from the processor to the graphics card. DMI, or Direct Media Interconnect, is the PCIe-like link from the processor to the 400 series chipset. It’s interesting that Intel specified these, rather than PCIe generally. Possibly it could be a sign that they’re separated from sensitive NVMe drives. There’s no mention of PCIe 4.0, but if you’re limited by PCIe then maybe this could make up some of that difference.

More Boost For Your Boost – Boost 3.0 and TVB on Desktop Comet Lake 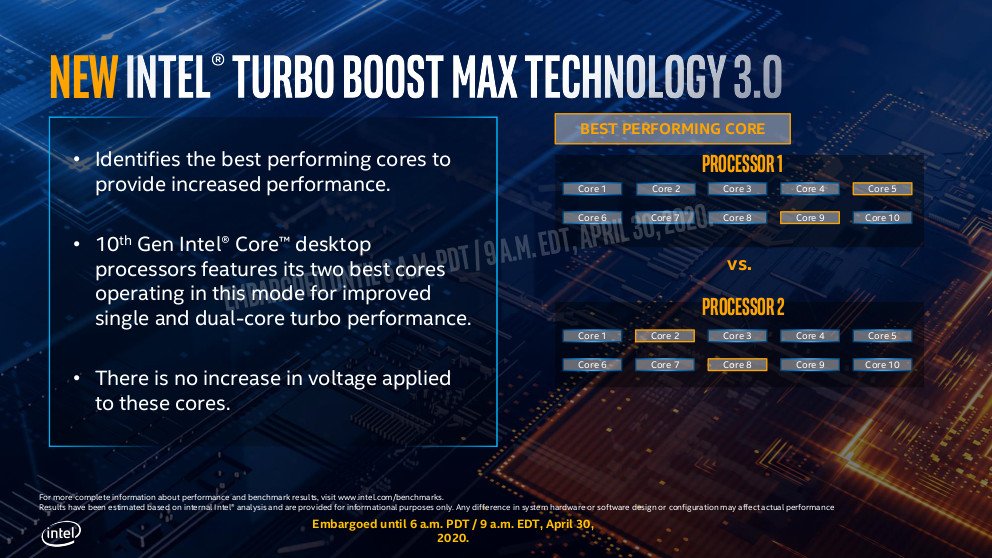 Comet Lake brings a new memory controller to Intel’s desktop lineup, with DDR4-2933 support. Interestingly though, like Turbo Boost Max 3.0 and Thermal Velocity Boost, the new memory controller only applies to i7 and i9 parts. The lower-end chips are still rated for DDR4-2666. With Intel still using the well proven Skylake microarchitecture, this could be a sign that the silicon itself is unchanged from past generations of 6-core and below. 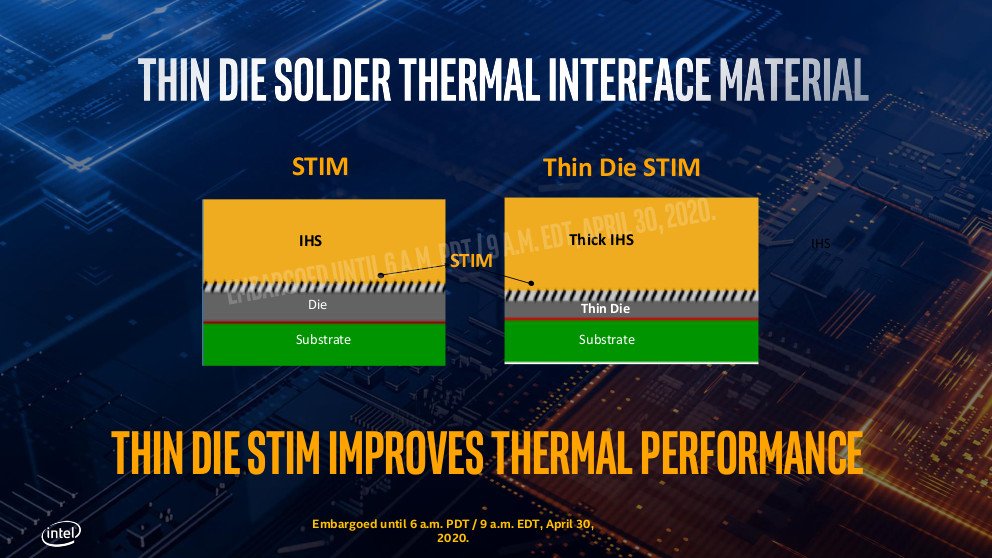 This one was a big surprise to us but a very welcome one. Intel have reduced their die thickness on Comet lake, from 0.8mm to 0.5mm. Alongside this is a corresponding 0.3mm increase in IHS thickness, to keep the overall package the same size. Intel are specifically citing cooler compatibility as the reason for not thinning the overall package. The chips are still soldered, but now the heat can get to the IHS much faster. Once it’s there, Intel tell us the copper moves heat 3x faster than the excess silicon did.

Some brave enthusiasts would previously sand down the die on their 9900K to improve temperatures and overclocking headroom. This is Intel providing that same mod for everyone, out of the box and without having to risk your chip. The i9-10900K should be significantly more coolable that it would otherwise have been, thanks to this.

This final point is an odd one. Intel have announced “support” for both Wi-Fi 6 and 2.5Gbps ethernet on their 400 series platform. But “support” is a flexible word. After all, you can buy a 2.5Gbps ethernet card and put it on just about any platform – in that way, it’s “supported”.

What Intel’s support for these latest networking standards means in practice is that the chipset includes control logic. A network chip can be divided into two parts – MAC or Media Access Control and PHY or PHYsical layer. The MAC does the processing, and the PHY sends and receives the signals along the wire or airwaves. Intel ‘s 400 series chipsets include a MAC for (actually 1Gbps – see below) ethernet, and one for Wi-Fi 6. To actually use these you still need a PHY, which Intel sell separately. This does reduce the barrier to entry, but don’t be surprised if budget boards eschew wi-fi and stick with 1Gbps Realtek solutions for their ethernet. Previously when Intel included a 1Gbps MAC we still saw Realtek solutions, and it seems likely that a complete Realtek controller is cheaper than Intel’s PHY.

Intel are slating the desktop Comet Lake series, including the i9-10900K, for global availability in May.