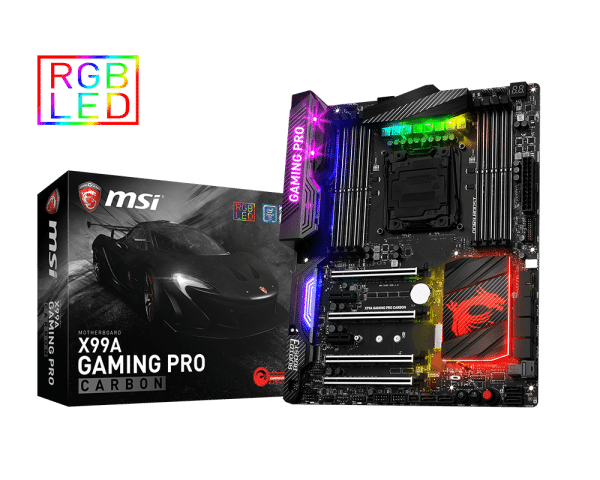 Everyone and their dog is joining in on the rejuvenation of the X99 platform with the release of Intel’s Broadwell-E CPUs, and MSI is no exception. They’ve brought us the MSI X99A Gaming Pro Carbon in this scenario, which comes with a boatload of LEDs around the motherboard to keep all of you RGB fan boys happy. The aim of the Carbon is to bring value for money to the customer, and to outperform its candidates in the process. The idea behind the Carbon Pro Gaming, in MSI’s words, is that it is fast, durable and sort of futuristic looking. Whether or not that is the end result remains to be seen without testing it for ourselves first. As the RGB moniker is somewhat a selling point, MSI have made sure that there is a way to control LED strips from the motherboard as well. I will touch on this later on in the closer look segment. Given that this is an X99 motherboard, it does come with all of the usual suspects such as the M.2/U.2 ports, USB 3.0/3.1, and all of the rest that you’d expect to find on the typical X99 motherboard. The ‘Mystic Light,’ as MSI calls it, is something that will be a key selling point for those looking at RGB for their next build. So, without any further time wasting being allowed to take place… let’s open up the box take a good look at the MSI X99A Gaming Pro Carbon!

At a first glance, we can see how sleek MSI have made the Carbon’s appearance. It is almost all-black with a few accents of silver here and there, as well as the carbon fibre effect protruding on the heatsinks/IO cover. It is certainly an eye-catching design. The look that they have gone with is pretty much a direct comparison to that spicy looking sports car on the front of the box. Aside from the manufacturer selected parts, the Carbon looks like most other X99 in terms of its eight DIMM slots, capable of utilising up to 128 GB of memory at 3466 MHz, four PCIe x16 slots which will give you full access to multiple levels of multi-GPU support, and the M.2 port which is buried between the lanes. While you will see no extra LAN controller onboard aside from the Intel I218V, it is by no means a bad thing. The Intel chip is actually very good at what it does, and it allows MSI to keep the costs of the motherboard down, thus bringing you a better value for money product to market. Broadwell-E is a power hungry, PSU busting demon, and in order to cope with whatever power draw you might need, MSI has kitted the Carbon with an eight phase power design. They consist of their military-grade Titanium chokes, which as the name suggests features a Titanium core that is better at tolerating high temperatures versus standard materials used in lower quality chokes. The Titanium chokes can run at 220 degrees Celsius, and also boast a 40% higher current capacity along with 30% better efficiency that will in turn give you better stability when pushing the clocks on your CPU. Aside from the Titanium chokes, MSI has also got Dark capacitors that have aluminium cores. They are rated to have at least ten years of life in them, which is attractive from anyone’s point of view. Now, whilst I do strongly doubt that anyone on such a platform will have their system for the next ten years, it’s more for the peace of mind sake than anything else. As always, here’s a shot of the heatsink assembly when it is taken off of the board. The IO shield is one large chunk of plastic that stretches all the way from the bottom to the top of the motherboard. Look at that dragon! As I mentioned earlier, the X99A Gaming Pro Carbon from MSI features eight DIMM slots, capable of holding up to 128 GB of memory and with frequencies in excess of 3466 MHz once overclocked. It is worth noting that you may never see high capacity modules hitting such frequencies, but the advertised ability is for smaller modules that most of us will be using. The kit that Corsair graciously provided us with for our X99 testing is rated at 3000 MHz, so it should have no problems achieving this speed, and perhaps there’s also a little left in the tank. I shall be finding out later on in the overclocking section of this review, as you’d probably expect by now. The DIMM slots are encased in metal, which aims to not only provide a more pleasant appeal to them, but it also offers a little more durability to the overall lifespan of the slots. One additional bonus to these shielding modules is the fact that it helps to eliminate EMI (electromagnetic interference) which will allow for more stability at higher frequencies. One of the benefits of X99 over Z170 comes into play when you are considering the amount of SATA ports that you might require. X99 natively supports up to 10 SATA 6 Gbps ports. Two of them do come from the SATAe port, but that’s not the point we are trying to make here. SATA ports 1 to 6 are able to operate in RAID 0, 1, 5 and 10 but SATA ports 7 to 10 can only run in IDE or AHCI mode. The M.2 slot (Key M) is capable of supporting drives up to 80mm in length (2280) at the most, which is a shame as it would have been nice to see it support a 110mm (22110) length device as well. The U.2 port is able to support PCIe 3.0 x4 NVMe storage devices. That leaves us with the SATAe port, which is compatible with two SATA ports if you would rather use them as conventional SATA connections instead. Intel Smart Response Technology is supported, but it would require a CPU which has it enabled. In the shot below, you can also see a USB 3.0 header, a USB 3.1 port as well as a few other cool things such as the on/off button, a reset button, and a big red button that you definitely should push! You know, it’s that red button in cartoons that says ‘DO NOT PUSH’ … you know you want to do it! It’s basically a switch which you can press and turn to dial up the clocks automatically if the option is enabled in the UEFI. Towards the PCIe segment of the motherboard, we typically expect to find a myriad of connections, such as the audio header for your front ports, additional USB 2.0 (and now 3.0) headers, fan headers, and much more. The Carbon does not lack in that respect. As I mentioned earlier, the M.2 port is located between the PCIe slots. It has been criticised in the past due to the excessive heat that these SSDs do generate, but given how full up the motherboards are these days, you’ve got to make do with the real estate available to you. It just so happens that the M.2 port fits in here. Either way, what we have is four PCIe x16 lanes, which can run in various different configurations. They are officially rated to carry three GPUs, with the fourth lane coming from the PCH. The real outcome of the bandwidth would depend entirely on which CPU you used, as they can have either 28 or 40 lanes depending on the model. Along the bottom, as I mentioned, we have two USB 2.0 headers, the audio header and the JLED1 header combined with the JPWRLED1 header which are there to plug your LED strips into. This will grant you control over the colours (if they are the correct ones) that the LEDs produce so that you can give your system a much more personal touch. The majority of motherboard vendors are currently deploying very similar methods to controlling your LEDs from your motherboard, which means that it most likely isn’t going to be going anywhere anytime soon. The input and output segment of this motherboard is not as filled out as some other products on the market, but it still provides you with the necessary connections for almost all of you out there. There’s a PS/2 combo port, four USB 2.0 ports, a clear CMOS button (very useful!) and four USB 3.1 Gen1 ports. The Intel I218V chipset controls the LAN port, the ASMedia® ASM1142 chipset controls the USB 3.1 Gen2 and GEN 2 Type-C ports, and the Realtek® ALC1150 chipset controls the audio jacks along with the optical S/PDIF connection as well.

Even though this is one of the cheaper X99 motherboards on the market from MSI, it does not mean that it comes unequipped in terms of accessories. There are plenty of things in the box to make this a more attractive offer to you guys, the consumer. You will find various things in the box that range from stickers to LED extension cables. Here’s a more extensive breakdown of the contents of the Carbon; 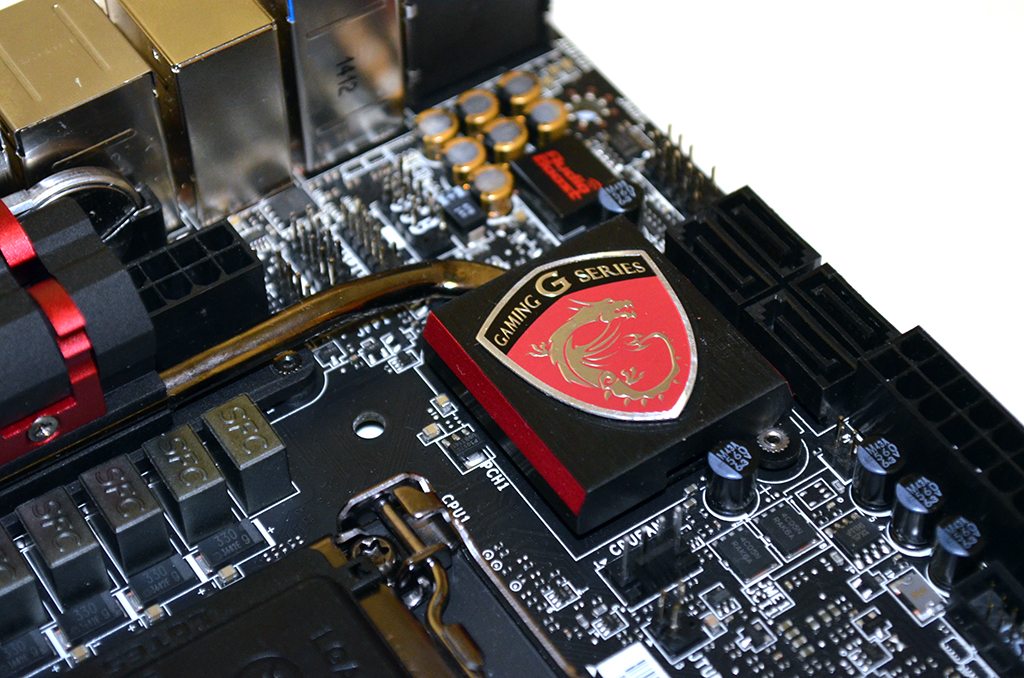 Gavin Bonshor - May 10, 2014 0
Up for review today is the brand new MSI Z97I GAMING AC motherboard which supports 4th and 5th generation Intel processors...
Go to mobile version
%d bloggers like this: