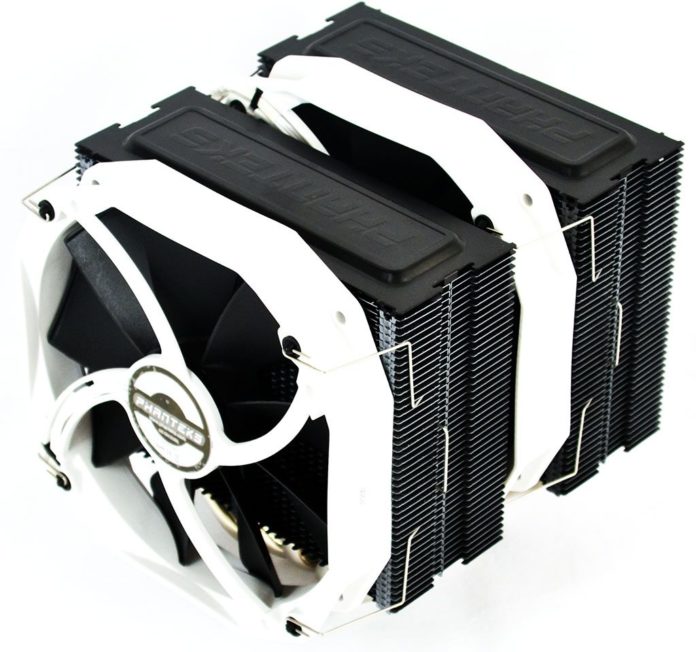 Back in 2007, a group of engineers with a passion for technology and 2 decades of experience in thermal solutions formed Phanteks.  They currently specialise in CPU coolers and fans and although the company is very young, don’t be fooled as their coolers have been generating a lot of hype and more importantly, have a reputation for being one of the hottest cooling brands around.

Their latest line has been attracting attention also, namely the PH-TC14PE for being available in a variety of different colours, which is useful if you want to colour co-ordinate your PC build.  That being said, I have one of these on my test bench today and I look to put some heavy load on it, namely from Intel’s latest CPU range, Haswell. (Socket LGA1150) Can it take the heat?  Or will it just fizzle out like a match in a freezer?  Let’s find out, starting with the specifications…

The Phanteks PH-TC14PE comes safely tucked away inside a mainly white box, with black accents.  There is a stock illustration of the TC14PE cooler itself, with a colour chat on the top of the box which highlights which colour model is inside the box.  As you can see the TC14PE is available in 5 colours which are Red, Blue, White, Black and Gold. Over on the rear we have a small synopsis of the TC14PE cooler in 10 different languages which include English, German, French, Italian, Spanish, Swedish, Norwegian, Finnish, Danish and Dutch.  The design of the packaging remains consistent throughout and has a pretty well thought out layout. Taking a look at the TC14PE cooler itself, as you can see it’s a pretty big cooler, which incorporates 2 x 140mm fans to aid with the cooling.  The design is a dual tower design and a 3rd 140mm fan can be installed to further aid cooling at the cost of being able to install RAM with tall heat sinks. From the front side view, you can clearly see one of the 140mm fans in all its glory.  This particular edition is the black tower, which includes white fans. Looking top down onto the TC14PE, you can see the Phanteks logo which is clearly visible on the top of each tower.  The cooler looks fabulous and when installed into a case, people will know which brand of cooler you have installed onto your system. The base and heat pipes are made from copper which is then coated by nickel plating, giving the cooler its gorgeous finish.  The cooler features a 5 heat pipe design with a diameter of 8mm.  This aids in dissipating heat from the base into the towers, which is then cooled by the fans via flowing air. The installation of the Phanteks PH-TC14PE cooler was relatively painless with no major issues.  Installation was easy and took very little time, especially in comparison to the Thermalright Silver Arrow SB-E I reviewed previously.

To start with, as with most coolers, the mount needs setup with the main screws being fed through the mounting system, right through the holes on the motherboard.  There is only one way to install this back plate and on the rear as you can see, the back plate has a guide of which holes are for which socket.  In the case of Haswell, you need to use the 1155 mountings which also double up for 1156 also. Next, there are 4 plastic cylinders which fill up the space from the screw, to the actual bolt which needs to be attached to keep the mount affixed to the motherboard.  These not only aid the looks but serve a very useful purpose.  With these you don’t damage the boards PCB when you’re tightening the bolts as the plastic will take the brunt of that.

After that, there are 2 metal bars which contain the screws for the final part of the installation are placed onto the screws. Once the bars are installed into place, they are held down with 4 x locking nuts, which can be tightened (not too much or you will damage the thread) down to ensure they are secure to the motherboard.

The final part of the installation is the securing bracket which contains to screw bolts and screws into place.  There is a raised part in the centre of the cooler when the bracket aligns with and also ensures the cooler is dead centre on the socket for optimal cooling performance. Here is the finished article installed onto the lovely Gigabyte Z87X-OC Motherboard. To test the capability of the coolers, our testing methodology is simple.  We measure the temperatures after 10 minutes on idle, both at 3.9GHz which our samples stock turbo boost speed and with an overclock of 4.5GHz.  To test the loaded temperatures I use prime95 and its torture test for 10 minutes and record the max temperature given.

So, the Phanteks PH-TC14PE has been given a thorough testing with Intel’s Haswell i7 4770k, but can it stand the heat?

Well starting with the most important part of the process, the cooling performance, the Phanteks PH-TC14E is the best performer that’s been on my test bench so far.  With slightly higher idle temperatures than the Silver Arrow SB-E Extreme, it certainly does its job when put under load and consistently beats the rest of the pack in our tests.  This is good for enthusiasts who want to run decent stable 24/7 overclocks.  Baring in mind the testing is done with Haswell, on other platforms like Ivybridge and even Sandybridge, you should be able to achieve very good overclocks with relatively reasonable temperatures.

With acoustic performance being the other part of our testing at Play3r, at load it is higher than Noctua’s latest offerings but baring in mind the TC14PE has 2 x 140mm fans, the performance is excellent and I even had to check that the fans were maxing out under Haswell’s intensive thermal conditions.

The look of this cooler is also another plus on Phanteks behalf, probably one of the best air coolers I have graced my eyes on.  With this cooler in particular being available in a variety of colours, there is bound to be a style that suits you and your setup.  This sample in particular is the black version, which includes white fans and in my honest opinion, the cooler is simply stunning.  The only real let down is the mounting system.  The final part of the installation is really fiddly but as a positive, it is really secure when affixed and there is no sagging whatsoever.

The only real negative of the TC14PE is the price, which comes in at just under £70.  This is really expensive for an air cooler but you have to remember, you are getting one of the best performing air coolers on the market but still, I would have expected Phanteks to have released it around the £50-55 mark around its biggest rivals.

Overall the Phanteks PH-TC14PE CPU cooler is not only a top performer, but its gorgeous aesthetics really do compliment it well and I believe Phanteks really do have a winner here.  Take into consideration the performance not only in temps, but also in acoustics, you can’t really argue with the figures and if you’re looking for a high performing cooler which is available in a variety of different colours, make sure Phanteks is very high on your list!

Thanks to Phanteks for the sample and I really look forward to seeing more in the future. The Phanteks PH-TC14PE is an overall exceptional cooler and with the only drawback being the price, those who want one of the best looking and highest performing coolers should make sure this little beauty is somewhere at the top of their shopping list.

Craig Bartlett - Sep 27, 2016 0
be quiet! are well known for their cooling, cases and fans all designed and built with a focus on low noise as well as quality, what can their new Silent Loop liquid coolers offer us?
Go to mobile version
%d bloggers like this: