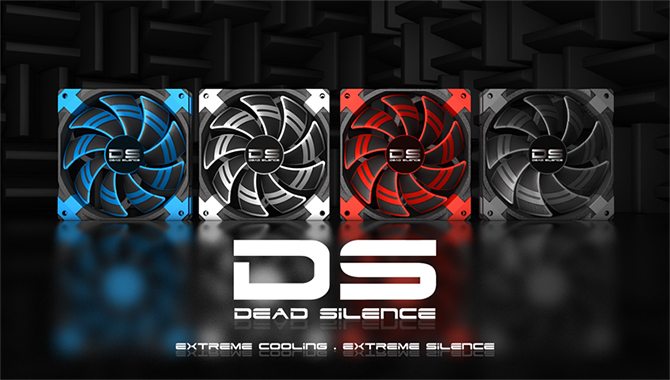 Aerocool Advanced Technologies, one of world’s leading manufacturers of excellent gaming PC gear, is excited to announce the launch of its innovative Dead Silence case fan series, which includes a 140 and 120 mm axial-fan model. Dead Silence is not simply a name; it’s the main focus of the newly established products series, which is bringing forth new technology to innovate the cooling market. After an intensive development period, Aerocool Advanced Technologies was able to create an impressive case fan that combines the sturdiness and advantages of plastic with the flexibility and vibration absorption of rubber! Aerocool is first in the world to bring this technology to the market, offering dual-material silent fans in the common sizes of 140 and 120 mm. Both fan models are based on a dual-color design, where plastic is painted black and the rubber parts are painted in a second color, such as red, blue, grey or white, depending on the version! All nine fan-blades are constructed of dual-layer material, providing good airflow while not compromising low-noise operation! Rubber based rear side of the blades is utilizing a “Fish-Eye” surface to minimize air-turbulence. Dead Silence fan’s frame design is optimized by implementing four noise absorption chambers and anti-vibration rubber layer on each corner, preventing vibrations to be transferred to the chassis or CPU cooler! In addition, four LEDs are built into the frame to illuminate the fans (except for black model).

The slightly bigger 140 mm model spins with 1.000 RPM (64,8 CFM / 109,8 m3/h) at only 14,2 dBA. Operating the fan at 7 Volts drops the fan speed to 700 RPM and noise level to inaudible 10,8 dBA. Thanks to the very low 3 Volts spin-up voltage, users can adjust the noise-level and fan speed according to their preference by using the fans in combination with a fan controller.

Scope of delivery was carefully chosen, to satisfy the needs of enthusiasts and silence-fans. All Dead Silence case fans come with four anti-vibration screws, one 3-to-4-pin Molex adapter and an extra low speed fan 3-pin extension cable, which allows permanent operation of the fans at 7 Volts. All cables including the supplied adapters are protected by black sleeve.

Aerocool Dead Silence 120 and 140 mm case fans will be available from etailers and retailers worldwide from middle of January 2014. Suggested retail price for the Dead Silence 120 mm model is 14,55 EUR and 16,55 EUR for the 140 mm models (excl. Taxes).

Aerocool is one of the market leaders in the “Gaming Market”. Our strong brand and product image are well received by gamers and enthusiasts world-wide. We offer a full line of performance products including gaming cases, gaming PSUs, gaming mouses, gaming headsets, gaming keyboard, gaming headsets, multifunctional panels and fans.

Dave Hicks - Apr 7, 2021 0
Arctic Cooling announces an extension from their 2-year warranty to a new "6-year warranty" on their Liquid Freezer II range.
Go to mobile version
%d bloggers like this: