The ASUS RX 5700 series Strix cards have been subject to, in ASUS’s words, “user concerns related to the thermal performance and cooler mounting pressure”. ASUS are conflating these two things very closely, and the upgrades made to Strix RX 5700 series cards reflect that conflation. As of January ASUS Navi-based cards come with higher mounting pressure for better cooling, and ASUS are offering upgrades to existing Strix RX 5700 customers once the parts have been distributed to their service centres.

This should be a simple story about a company rectifying a mistake. Unfortunately, there’s also a blame game being played.

“We’d like to address user concerns related to the thermal performance and cooler mounting pressure we use on ROG Strix Radeon RX 5700-series graphics cards. During the design phase, AMD shares documents with our engineers that outline specifications and tolerances to ensure performance and reliability margins are maintained. For the Radeon RX 5700 series of GPUs, AMD recommends the following mounting pressure range for coolers:” 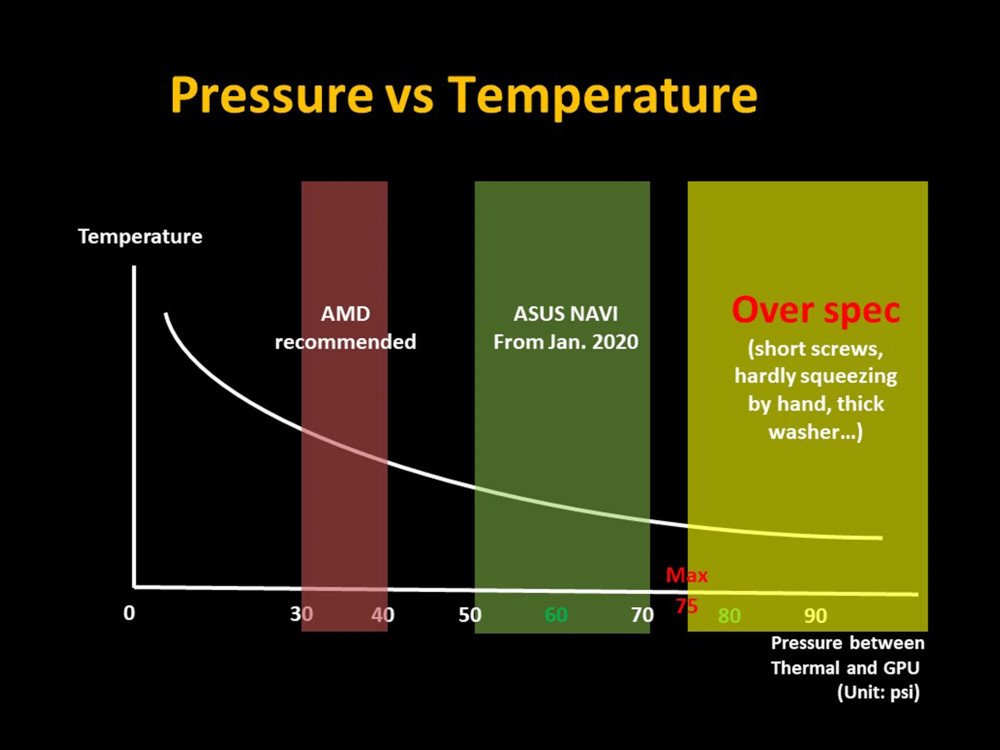 “As a result, all ROG Strix Radeon RX 5700-series graphics cards shipped from January 2020 forward feature new screws that increase cooler mounting pressure to 50-60 PSI, resulting in improved heat transfer from the GPU to the heatsink.”

“Of course, we are committed to supporting our customers. We would like to offer the same benefits of the new mounting screws to users that have already purchased a ROG Strix Radeon RX 5700-series graphics card. If you already have one of these cards and would like it modified to use the new mounting screws, please contact your nearest ASUS service centre starting in March of 2020 and we’ll happily perform the upgrade for you.”

“To determine whether your graphics card is eligible for this free upgrade, please consult the following table of model numbers [see original post]. For further assistance or information, please contact your local ASUS customer support team.”

“We’d like to apologize for any inconvenience caused and thank you for your continued loyalty and trust in ROG.”

For whatever reason, AMD chose to recommend a mounting pressure of 30-40psi for their Navi cards. On the upper end, that’s equivalent to resting 7kg evenly on the GPU die. AMD have their own testing labs and do their own engineering so this number didn’t come from anywhere, but it could still have been too conservative. This is the first thing we know from the announcement.

The second thing we can gather is that ASUS RX 5700 series cards, despite an impressive-looking cooler, get hotter than they should for what they are. ASUS is not the only manufacturer to experience this, but other manufacturers got better results. ASUS are acknowledging this and consider it a problem to rectify, which they are doing.

Finally, we see that increasing the mounting pressure – including beyond what ASUS label as the max – improves temperatures. Users have been doing this with the “washer mod” for a while. It’s worth noting that the information ASUS have shared suggests that the “washer mod” can lead to excessive pressure if the washers are too thick.

Putting these together, ASUS has decided to improve their cards by moving the mounting pressure into the gap between AMD’s recommendation and the absolute limit. ASUS says they have now tested extensively and can do this without compromising GPU reliability. We don’t know if other manufacturers were doing this already, or if this is compensating for an issue elsewhere. ASUS also want you to blame AMD for providing numbers that were too conservative. It’s unlikely that AMD will respond tit for tat, so users will have to think critically and draw their own conclusions.

None is this is to say ASUS is being dishonest, we just need to remember that we’re only going to get one side. Offering after-sale upgrades for Strix RX 5700 series cards is still a good thing. It is the blame game we should be cautious of.

Based on ASUS’s wording, all-new ASUS Navi cards (RX 5500, 5600 and 5700) from January 2020 have increased mounting pressure from the factory. If you already have an applicable Strix RX 5700 card and want the upgrade ASUS is offering to modify you from March, once they can get the supplies to their service centres. This is free of charge, and as long as it’s done by an ASUS authorised service centre should not affect warranty coverage.

ASUS has not mentioned if this applies to TUF or Dual series cards. The model numbers listed seem to only be for Strix RX 5700 series cards.

Finger-pointing aside, this is a good thing. Existing Strix RX 5700 cards are fully functional and ASUS are under no legal obligation to provide upgrades. By offering users an after-sale improvement free of charge ASUS shows a commitment to their ROG Strix GPU brand and customer experience.