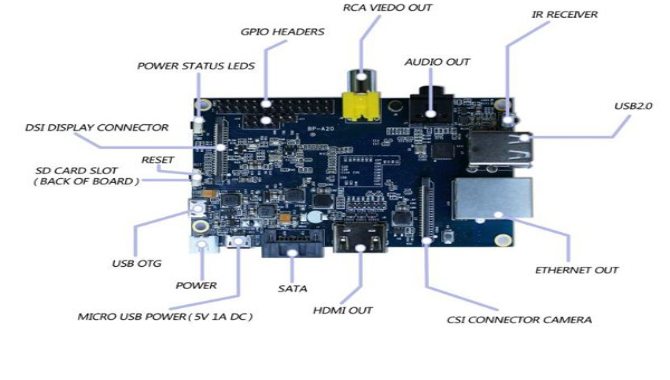 Giving the Raspberry Pi a run for its money is the new and much more powerful Banana Pi. Get your wallets at the ready.

Being on the market for almost two years, offering so much for such a small price of £30 (roughly), the Raspberry Pi took the world of technology by storm but now it may have some competition. As the fruity name suggests, the Banana Pi offers a similar concept to the Raspberry Pi. It’s an incredibly small, bare-bones PC, packing in the essentials and not a lot else. It means you’ll be able to customise to your heart’s content – coding specific programs to carry out functions for your home entertainment systems, or adding different features like cameras – but it also means you’ll need to know what you’re doing if you want to get the best out of either the Raspberry or the brand new Banana Pi.

Offering a 1GHz dual-core ARM Cortex-A7 processor, 1GB RAM, HDMI port and composite video jack, 3.5mm headphone jack, SD card reader, USB 2.0 ports and SATA connection, the Banana is very similar to the Raspberry. More features include a Gigabit Ethernet, an IR receiver and a 26-pin connector that lets you add a Raspberry Pi compatible camera. So with this in mind why would anyone want to buy the Banana Pi over the infamous Raspberry Pi? Well, performance is much better but according to some sources, the Banana Pi will offer much more compatibility with other external sources but nothing has been set in stone.

If you do fancy a step up in power, the Banana costs just $57 (£34) – slightly more than the £25 needed for the Raspberry, but still a true bargain if you’re looking to set up the heart of a home entertainment system or more.

What do you use your Raspberry Pi for? Let us know!

Melissa Hadfield - Aug 26, 2016 0
The MoO 2 remaster has finally left Early Access, is it worth your time, or should it be sent to out to pasture?
Go to mobile version
%d bloggers like this: