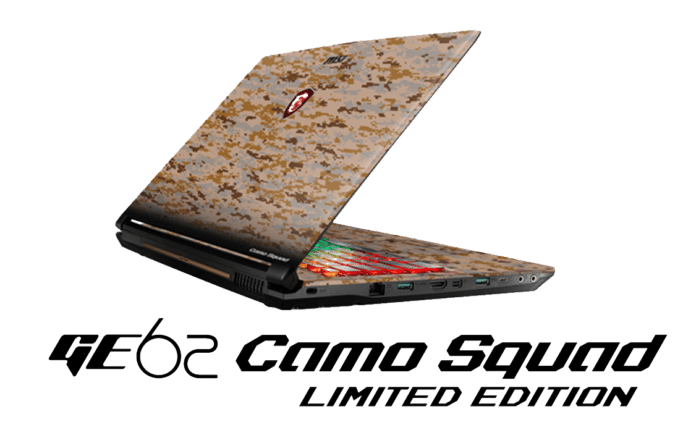 GE62 Camo Squad Bundle Limited Edition For 2017’s very first limited edition bundle, MSI introduces camouflage themed GE62 for the very first time. It’s aimed at giving users a feel of individuality, personal identity, and an incredibly immersive experience as if one is participating in the actual combat. Each camo designed gaming notebooks is made with delicate craftsmanship.

It is by far one of the most valuable collections yet, and of course, it comes with much more than just camo skin. 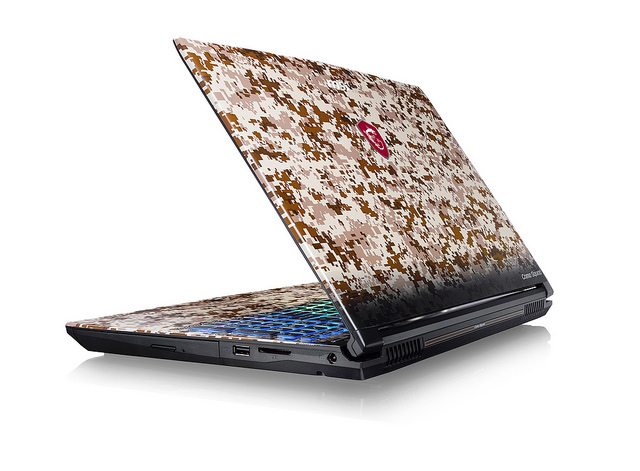 Best PC Gaming Choice – GEFORCE GTX 1060 & 1050Ti Ready Enthusiasts will have 2 GPU options to purchase this bundle with; one with GEFORCE GTX1060 GE62, and the other with GTX1050Ti Below 2 charts are the 3DMARK11 scores from both GPU for the tech-savvy enthusiasts

To put in perspectives, GTX1060 outperforms 980M and GTX1050Ti outperforms 970M. But what does that mean? It means now, these powerful machines that can run high-demanding games are more affordable than ever before.

Retain the fighting lineage of GE62

As the true gaming brand, MSI Camo Squad limited edition notebook isn’t just about having the greatest CPU or GPU, but along with it all these unique gaming features to enhance gaming experience. 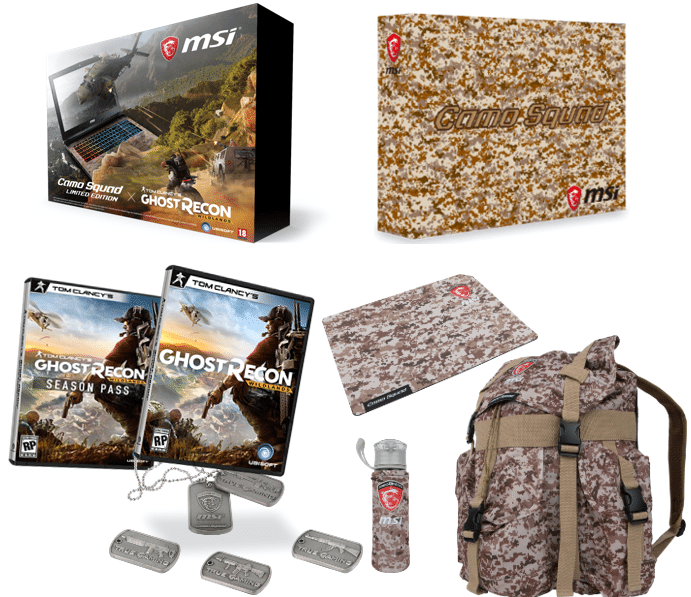 The above items have a total value of over $210, and are not available anywhere for sale, exclusive from the Camo Squad Limited Bundle edition!

Latest Architecture DDR4-2400 Memory Support Get the best possible performance out of your notebook with support for the advanced DDR4-2400 memory, achieving over 32GB/s in reading speed and 36GB/s in writing. With over 40% faster performance than previous generations DDR3-1600.

Keyboard by SteelSeries – Gain Full Command Better responsive and tactile feedback, optimum WASD zone and support of multi-key inputs are all for gamers to gain full command over gaming missions.

SteelSeries Engine 3 (SSE3) – Target, Position, Aim and Fire With SSE3, you get to suit up your weapon with cool look by lightening it up with multiple backlit colors, transform your keyboard into a high technology firearm by setting up several keys into one key command and cloud syncing all SteelSeries gears together.

LIVE THE COMPLETE AND IMMERSIVE VR EXPERIENCE Unchain the multichannel audio engine of your VR video game with Nahimic VR. More and more VR video games will be supporting the 7.1 audio surround. Unfortunately, they are locked in stereo. Nahimic VR is the world first audio solution to bring the 7.1 sound to a regular stereo headset. We provide specific audio algorithms that are capable of improving the 3D sound field drastically over HDMI and USB output. The result is a full and breathtaking VR experience for the gamers through combining VR video and 3D audio all together at once. Just click on the Nahimic VR button to turn on the VR audio effect through the Dragon Center, and prepare to be stunned! *Nahimic VR will be released soon, please stay tune. It only supports products which named with “VR”, not to all the series. The previous version of Nahimic could be updated into this new one, please feel free to visit the official product page and download for further installation while it’s valid. *for Camo Squad Limited Edition, only available on GE62 with GEFORCE GTX 1060)

Up to 3840 X 2160 resolution Four times higher resolution than a FHD TN LCD display, delivering images with more exquisite details Extraordinary Contrast and Brightness Color performance of the image outputs shall be marvelous with vibrant colors, deep black colours and bright whites. *This feature may vary by SKU and country.

True Color Technology – Always Ahead of Your Enemies Vision and sound are the most important two factors in this field. You now get to see clearer than your enemies to always get one step ahead of the rest. *Besides 100%sRGB Mode, True Color Technology also offers perfect color accuracy for 5 more scenarios.

Killer Gaming Lan – Protecting Your Ping Killer E2500 series chipset protects networking traffic and prevents lag spikes so you can game without fear and play at your best while tracking your speeds with the easy-to-use Killer Networking Manager.

XSplit Gamecaster Version 2.9 – Become A Professional Streamer Record your gameplays and broadcast it live to Twitch, YouTube, UStream and etc.. You may also edit gameplay videos directly on this app. It’s simple, easy to use and ideal for sharing your gameplay with friends, family or the world – or for capturing those perfect gaming moments, just for the heck of it.

So what are you waiting for? Ghost Recon; Wildlands is just around the corner, get your own Camo Squad Bundle and prepare yourself for an impending bloodbath between the cartels and the ghosts.

Why Gamers Should Play Online Casino

Paul Davies - Feb 16, 2021 0
Some people go to the casinos for the thrill of it, others for the glamour, but with online casinos so easy to access, we’re...
Go to mobile version
%d bloggers like this: