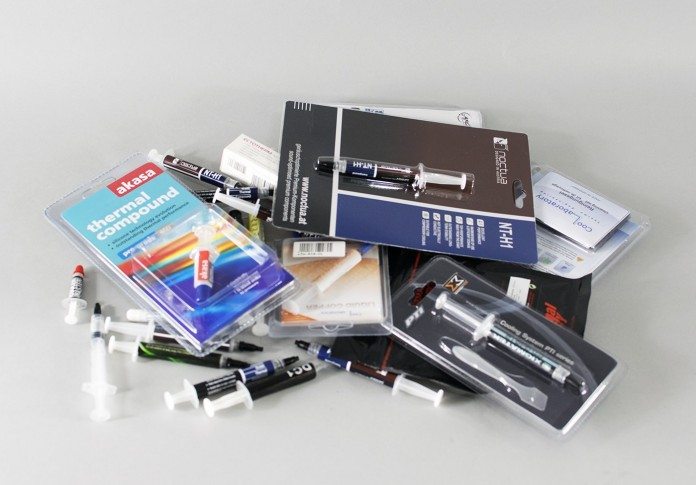 Due to many requests by readers, followers and even some companies wanting their pastes to be included in our comparison, we decided to do an updated “Which is the best thermal paste” article.  The previous article can be found here – http://www.play3r.net/reviews/cooling/thermal-paste-comparison-2015-best-thermal-paste/

We have added the following pastes to our graphs and tested them using the same methods as the previous comparison:

We also re-tested a couple of other thermal pastes based on readers questions, discussions and disagreements; we like to do what the people want!

Click each thermal paste below to purchase or learn more about the particular paste on test from the previous article – http://www.play3r.net/reviews/cooling/thermal-paste-comparison-2015-best-thermal-paste/!

As each thermal paste requires different curing times, different bedding in times, it made testing each thermal paste quite an arduous task in terms of time; no fear, taking our time is what Play3r does best and the following method was devised for the testing, something each of the thermal pastes had to go through prior to obtaining results.

Step 1 – Applying each thermal paste by each of the manufacturers recommended methods; where no methods were given, common sense and experience comes into play.

Step 2 – Running the test system for 24hrs with a run of Prime95’s torture test for an hour to help cure the paste in; some don’t need curing, but tough, we did it anyway!

With the test setup noted, the entire testing methodology being laid out in an understandable and tedious way, it’s time to see who reigns king… It’s quite apparent that Coollaboratory with their Liquid Ultra and Pro compounds are king of the castle in terms of cooling performance, although these do have their pitfalls and some people prefer to go elsewhere.  The main issue with Liquid metal is it is quite abrasive and personally, I have found it removes CPU information which is indented into the IHS; it becomes a problem if you like to know which CPU you are installing prior to booting up etc.

With the addition of a few thermal pastes, the TOP SECRET X compound does very well and is nearly comparable to IC Diamond 7 Carat; one of the pastes which we re-tested due to sour plums from their company rep.  I guess it paid off for them as they gained a degree or 2 and moved up the charts a little, but it isn’t a precedent which we intend to set, but we felt we should give it another chance at least.  Like the liquid metal options, it does cause abrasion too so bear that in mind before purchasing it.

The Cooler Master E1 and E2 also do very well in our charts, which gives us a trend that the metallic pastes tend to do a little better than ceramique/creamy compounds etc.  The E1 is made from silver with the E2 using gold as its substance of choice and both with their merits, the E2 does outperform the E1 in our tests.

So what’s the verdict?  Well the graphs speak for themselves, but there is always new compounds coming to the market to challenge the stalwarts such as Arctic Silver 5, MX-2 etc, but it isn’t often one can change one’s preference without showing a noticeable difference, not only in performance but in application to.  What will come around in 2016 to rival the industry leaders and will any come close to Coollaboratory?  Only time will tell!

If there are any thermal pastes you would like to see in the graphs which have not already been included, leave a comment below on the article!