Today’s review sees the first DDR5 kit on the site, and thanks to Thermaltake, we’re taking a look at the TOUGHRAM XG D5 RGB 6000MT/s kit. Let’s dig in and see how it looks and performs…

Designed with 2 different colours of aluminium and trimmed with a chrome stripe in the middle, the TOUGHRAM XG RGB D5 White provides a fresher look and is in a class of its own.

The use of an aluminium heat spreader delivers exceptional heat dissipation to meet high-performance needs.

Use of 10μ gold fingers for enhanced durability and high wear resistance. It’s nice to see the “traditional” box that we expect from Thermaltake’s premium branding with the grey and black theme. Featuring a clear picture and clear and concise text as usual. The back of the box has the usual requirements and information.
Internally, the RAM arrives in a clear plastic clamshell, which can be kept in the box and out of the landfill. Removing the two DDR5 DIMMs themselves, it’s obvious that this kit is the white variant. But they are also available in black should you prefer that colour. Regardless, of colour choice, the right-hand side of the DIMM which is in silver stays with both colour kits as does the reflective metallic plate in the centre of the DIMM. Out of the box, the kit come with 8 LEDs per stick, which includes the middle LED lower down which adds, in my opinion, a unique and tasteful design. The sticks implement a unique X-shaped light bar that can control 8 lighting zones. You get a better look at it in the picture where the colour is set to white. A top-down view of the kit, on the desk, shows off a closer look at the LED bar design with the Tt logo on the right-hand side.

For today’s test. I didn’t have a DDR5 system available other than my own personal system. So I’ve implemented that for the testing. 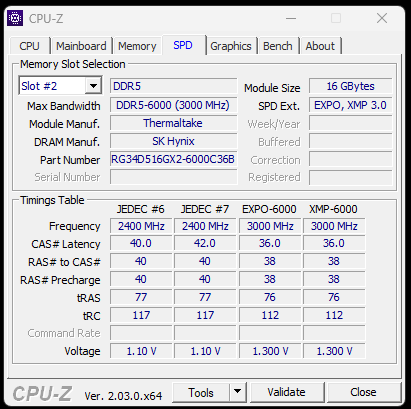 I used the EXPO profile (AMD’s in-house version of XMP 3.0), EXtended Profiles for Overclocking, is designed to provide users with high-end memory overclocking when used in conjunction with AMD’s Ryzen 7000 series processors.

We’ve updated our overclocking methodology to be a bit more in-depth, with the aim of being consistent for reviews going forwards. All the overclocked results you’ll see follow this new methodology.

We started with overclocking latency timings.

Put simply, the kit refused to boot with timings lower than the XMP/EXPO timings published. So that’s what we’ll use for the test.

As for frequency overclocking, the results weren’t much better. The system/CPU refused to boot anything higher than 6200MT/s.

These profiles are used for today’s testing results:

Produced by FinalWire Ltd, AIDA64 is a system information and diagnostic suite with an extremely wide range of features. Memory enthusiasts are particularly drawn to the synthetic cache and memory benchmark. AIDA64 latency is a common point of comparison for those looking to get the absolute most out of their systems. 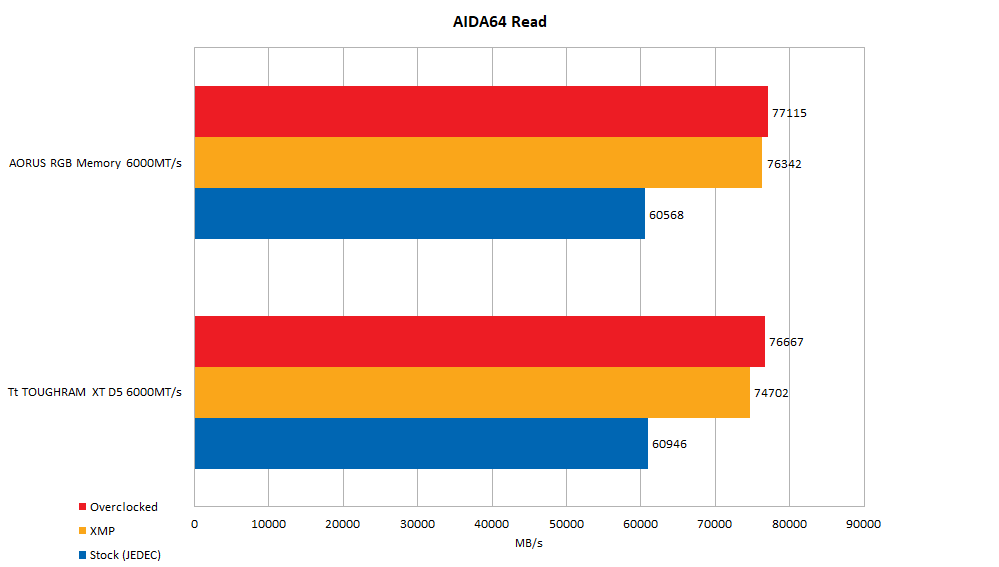 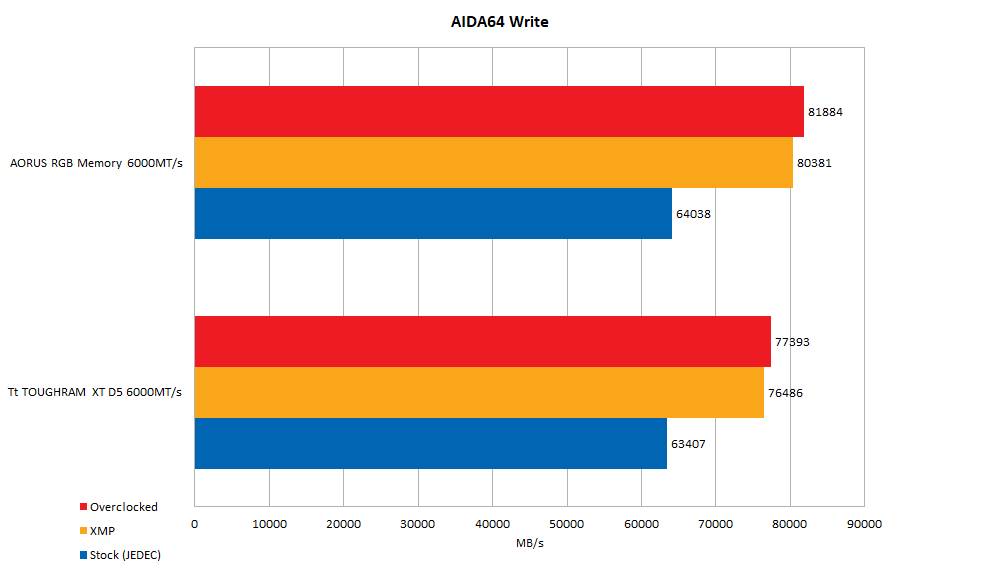 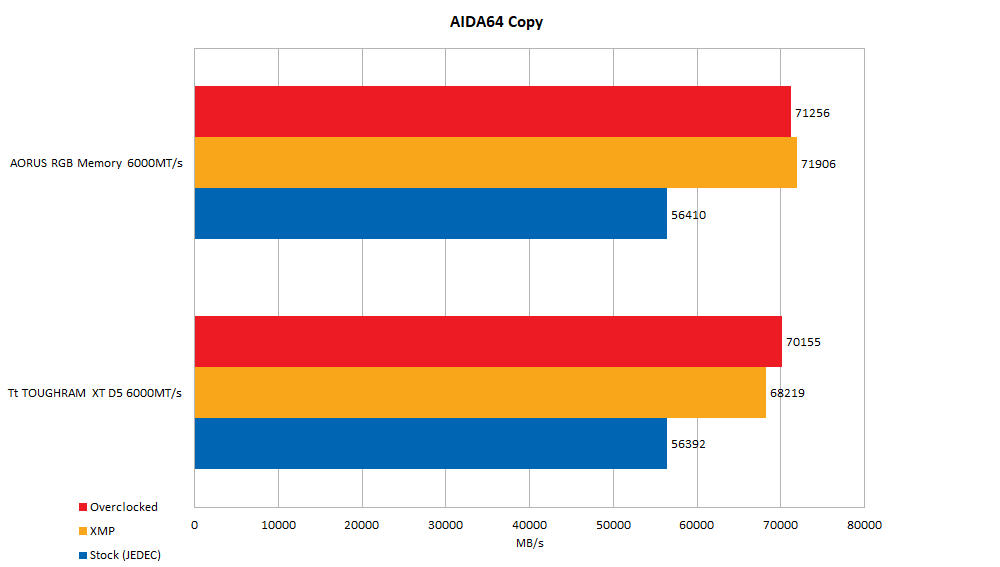 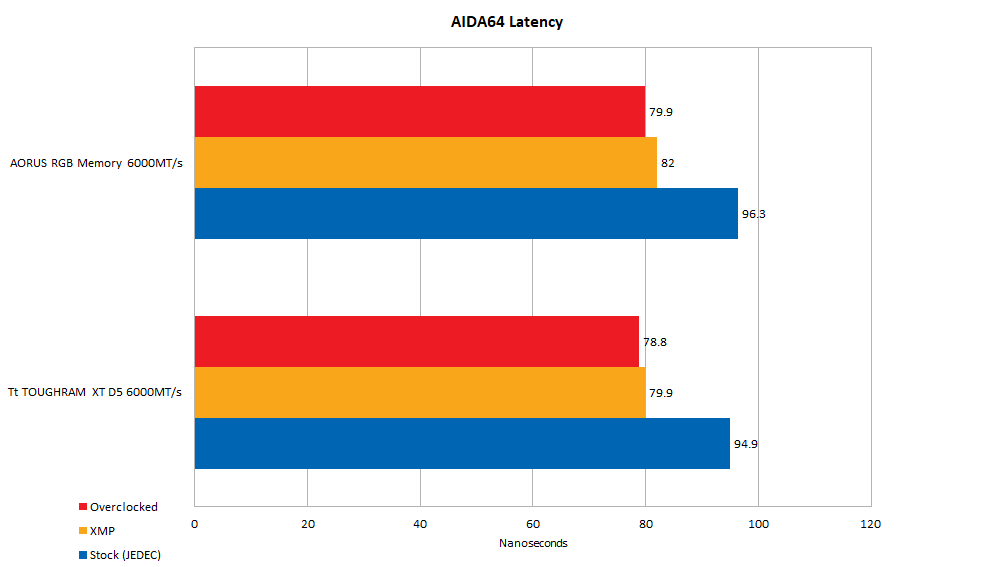 AIDA64 scores wouldn’t be complete without the screenshots people love to use to compare results – here are all three, for JEDEC, XMP and our manual overclock. 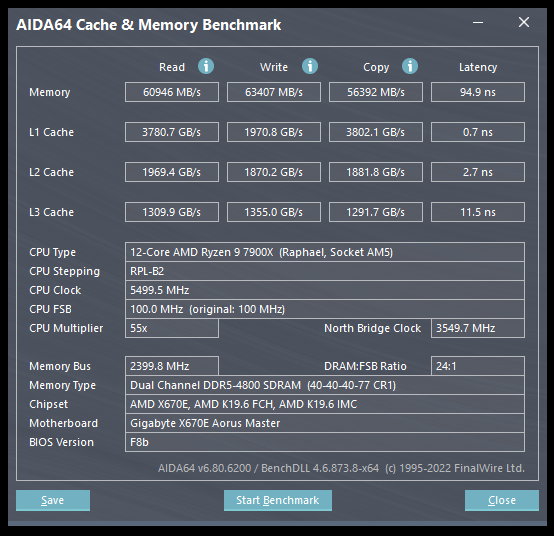 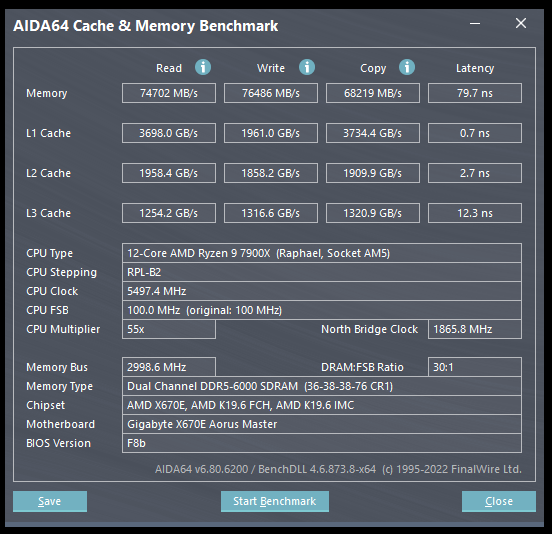 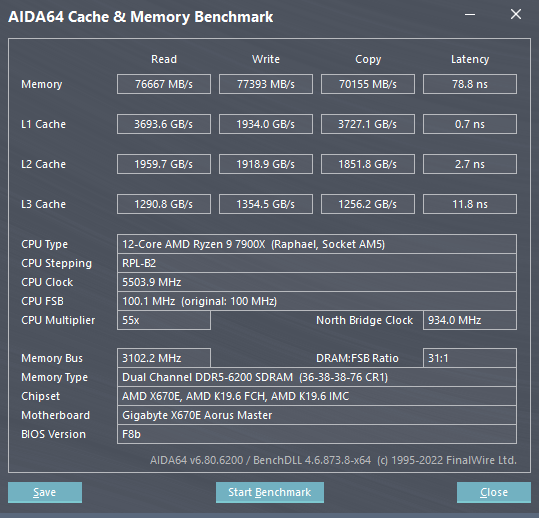 A “high school project that went too far”, y-cruncher is a highly optimised constant calculator. Written by Alexander J. Yee, the program can compute pi and other mathematical constants to trillions of decimal places. Because the Ryzen 9 5950X is so strong, y-cruncher is extraordinarily memory sensitive on our test system. We’re benchmarking the time to calculate 1 billion digits of pi. 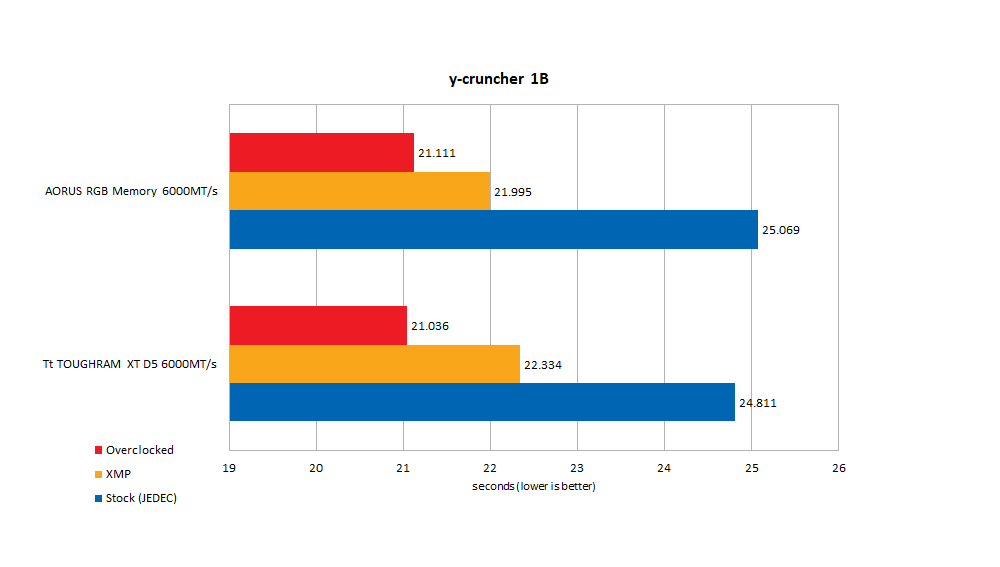 F1 2012 is an incredibly well-optimised DirectX 12 game that runs well even on an Athlon 3000G and has a built-in benchmark. Since the GPU side is so well optimised, our high-end setup is memory sensitive, even at 4K Ultra High settings. 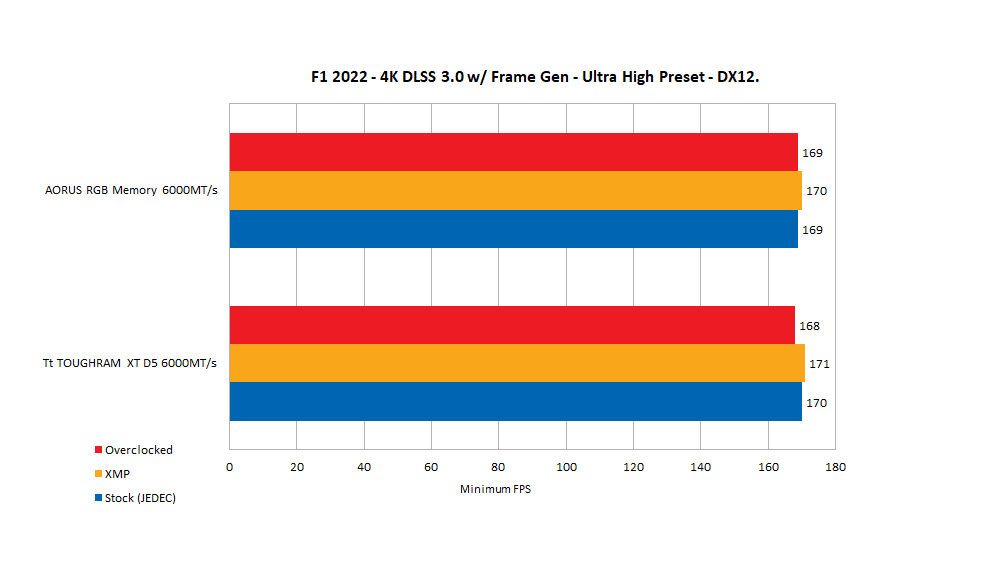 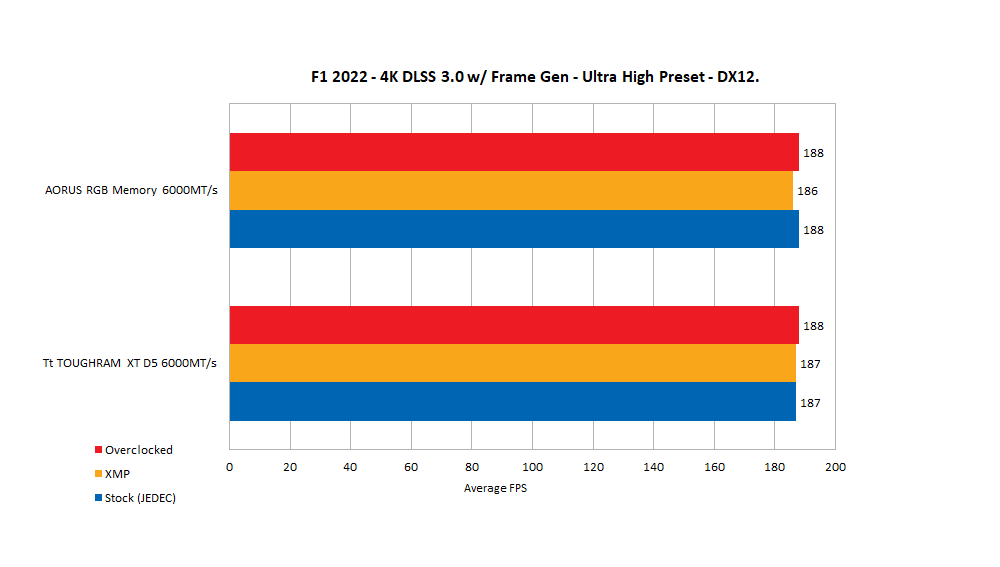 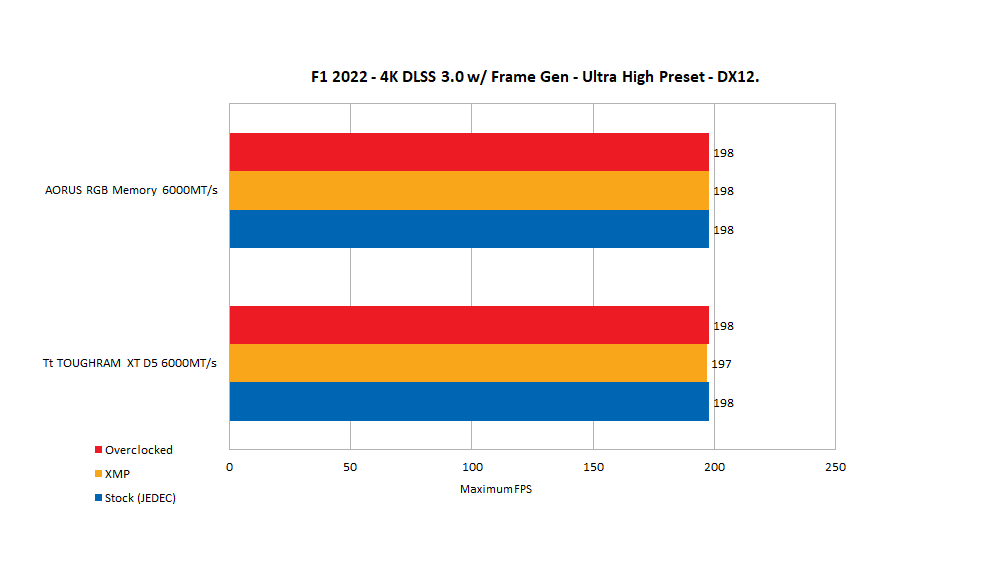 Interesting results, showing that there is not much of a change between the speed profiles. Especially between the stock and EXPO results. Almost nothing in it. But the OC takes it, closely followed by EXPO and JEDEC.

More than just a showcase for NVIDIA’s RTX: Shadow of the Tomb Raider has become popular among memory enthusiasts since it shows off the benefits of overclocked RAM. We ran the built-in benchmark at 4K resolution using DLSS and the Quality preset with DX12. 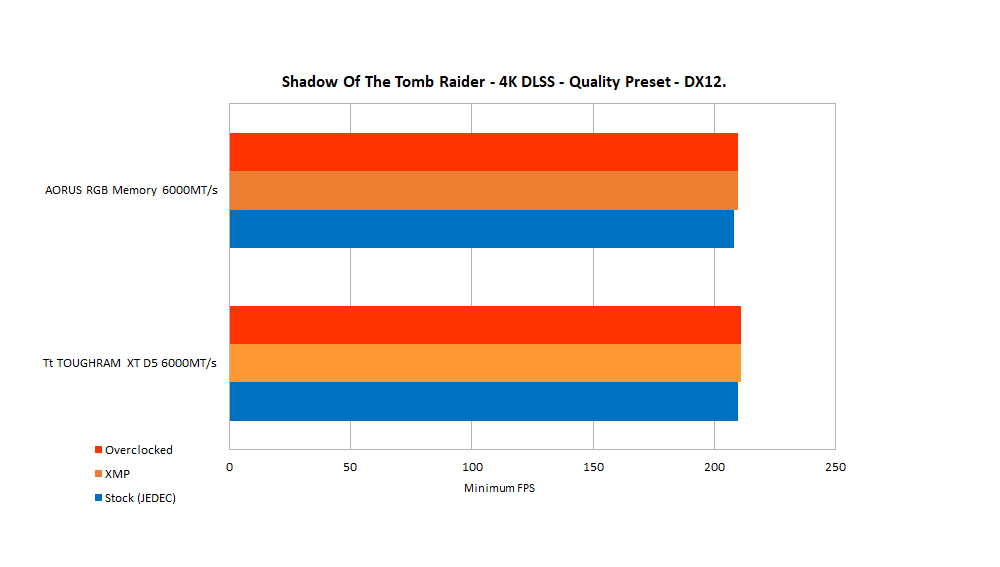 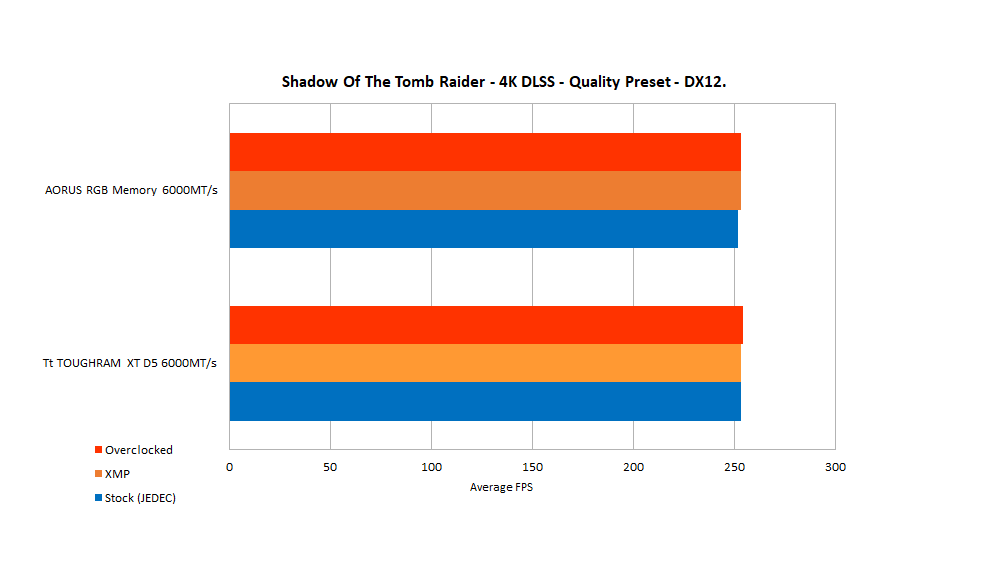 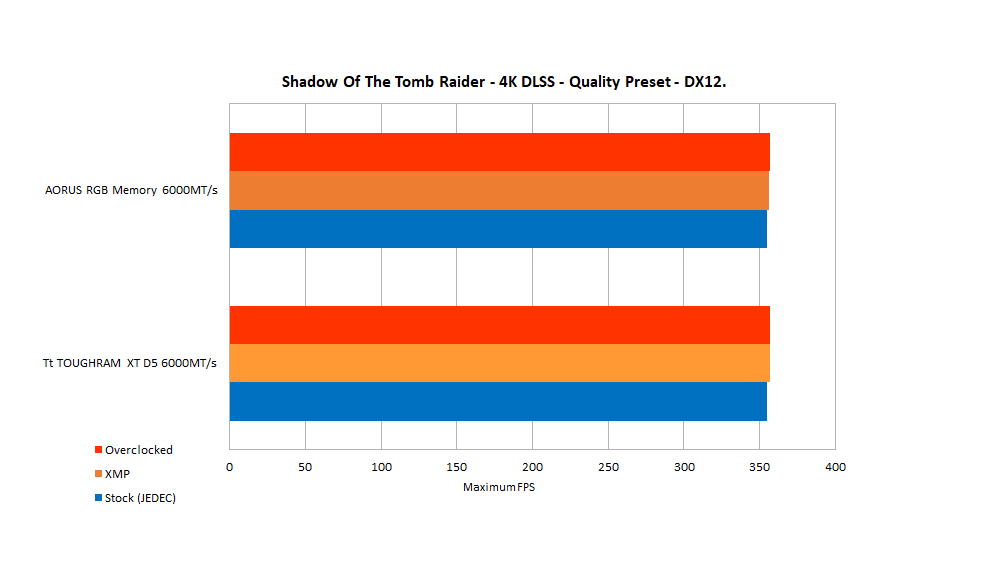 Another tight win for the Overclock, with XMP and JEDEC following up.

Cyberpunk 2077 is well-known for being the new “but can it run” game. With stunning visuals and exceptional gameplay, including exceptional Ray Tracing detailing. We turned all details up to 11 just to see how the memory speeds affect gameplay at 4K. 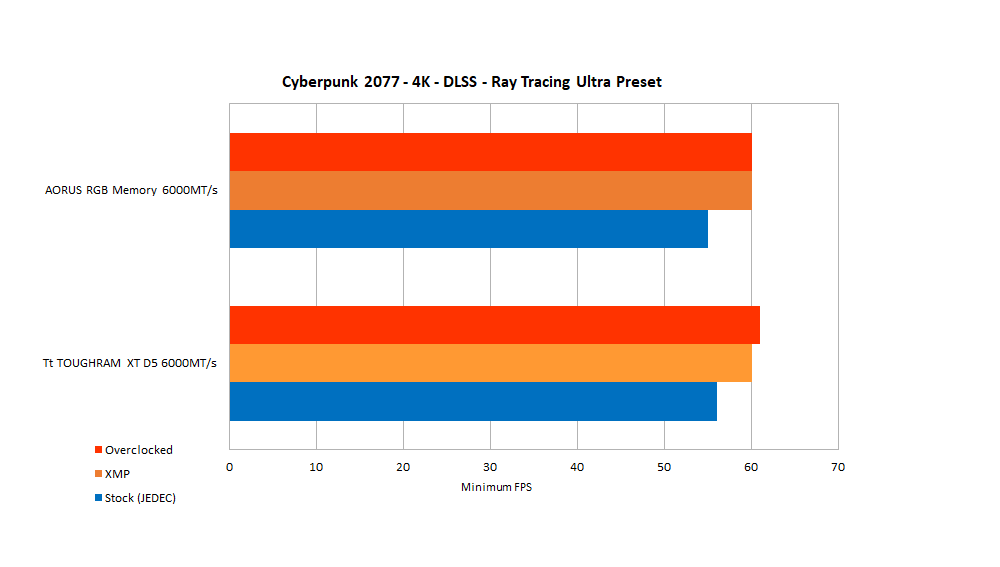 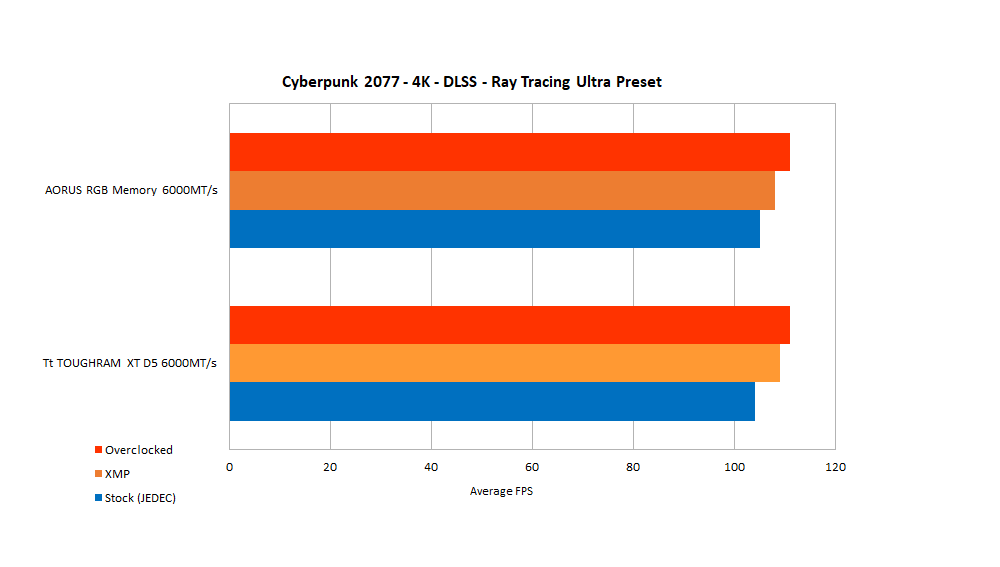 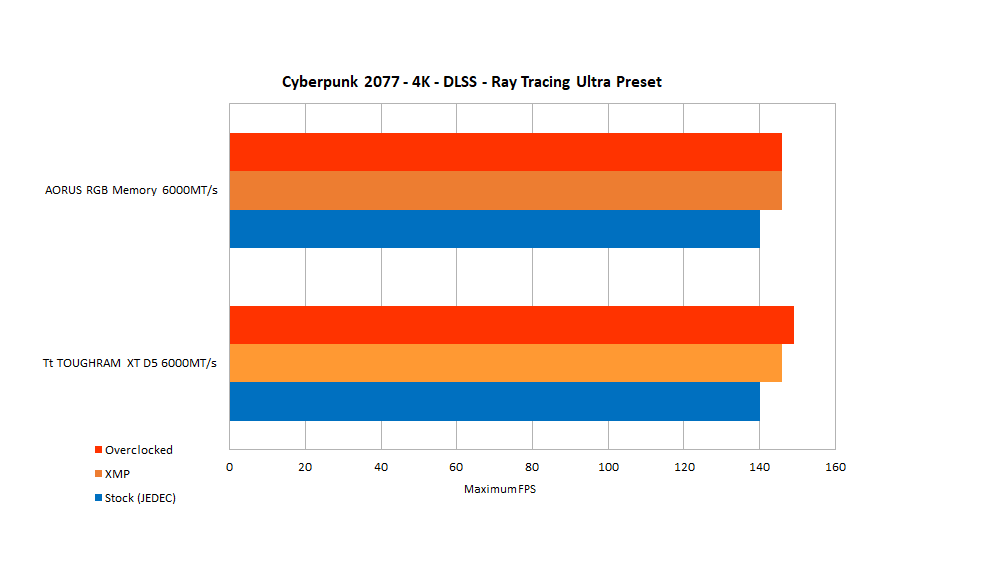 Another tight win for the Overclock, with XMP and JEDEC following up. Really is not much in it at all though!

If you’re a regular reader, you might be able to guess the conclusion already. The Thermaltake TOUGHRAM XG D5 RGB 6000MT/s kit is pretty good. Aesthetically it beats the AORUS RGB memory kit it was pitted against in this review hands down. Annoyingly said kit is my daily so I’ve hurt its feelings.
It has aluminium heat spreaders, with a choice of black and white that is contrasted against the silver spreader on the left-hand side of the stick. The RGB on top and above the metallic centre pad is another nice touch and, it has to be said, that the white (this kit) really does look nice in a primarily black system.

Performance-wise, there really wasn’t much in it between the two kits. Both perform amazingly well out of the box, once the XMP or EXPO profiles are loaded. AMD’s 7000 series supports both profiles so pick whichever you want. That being said, the AORUS kit doesn’t come with an EXPO kit, unlike the TOUGHRAM XG D5 RGB so that’s another win for the Thermaltake kit.

Timings on the TOUGHRAM XG D5 RGB were also tighter than the AORUS it was against too, so that explains the ever-so-slight FPS gains, as well as the win in AIDA64 and y-cruncher testing. The proof is in the pudding as they say!

Overclocking performance was a little underwhelming too. But as Thermaltake offer these kits in 5800MT/s, 6000MT/s, and 6200MT/s it’s not surprising. Nice to know that you can save a few £££ and get the 6000MT/s kit and overclock should you wish.

Overall, the Thermaltake TOUGHRAM XG D5 RGB 6000MT/s get a big thumbs up from us. It’s aesthetically pleasing, with a choice of black and white, and has decent XMP/EXPO performance at 6000MT/s, meaning they actually include AMD and Intel profiles.

Finally, as this kit will shortly be available at eBuyer for £213* this is an absolute winner against the competition. Making it a well-deserved winner of our Gold award… 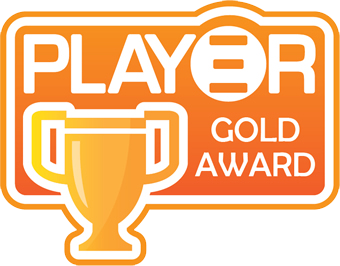 Big thanks to Thermaltake for sending the TOUGHRAM XG D5 RGB 6000MT/s kit in for today’s review.

*quoted price, will update once available.