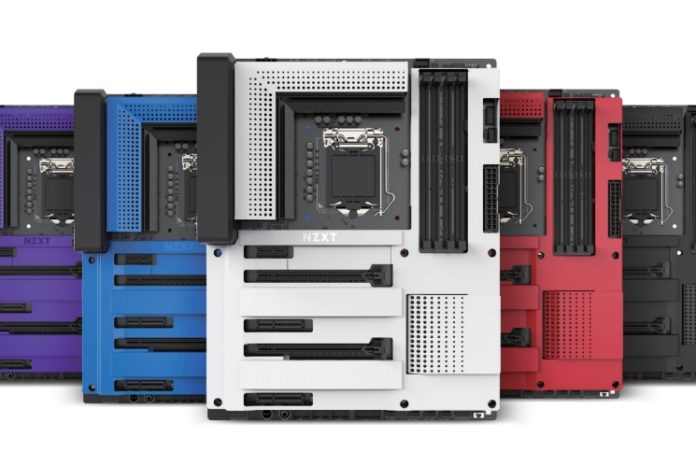 Back at CES 2018 in Las Vegas earlier this year (January), one of the most renowned case manufacturers announced their foray into the hardware area thanks to a fantastic looking motherboard in the way of the N7 Z370. While their cases have been nothing short of good quality for the price, it’s time to get to grips with this fresh looking, aesthetically pleasing ATX motherboard. Now it has been no secret that NZXT’s OEM of choice for the N7 is ECS, which in my opinion isn’t anything detrimental given the intention of NZXTs purpose for the N7 Z370; a good performing and unique offering as an alternative to brands like ASUS, MSI, GIGABYTE, ASRock etc.

This particular model is available in 2 different colours which are white and black. This gives users the ability to choose and customise the look of their system. Upon first glance, the most impressive and overwhelming things about the N7 is the full metal PCB cover which looks fantastic.

Storage wise, the board has 2 x M.2 ports with both supporting PCIe x4 NVME enabled drives, with the bottom slot also featuring SATA support too. In addition to this is 4 x SATA3 ports with support for RAID 0, 1, 5 and 10 arrays. Intel Rapid Storage Technology 15 is supported and this board is Intel Optane Memory ready.

Internal connections wise, there are 3 x USB 2.0 headers for a maximum of 6 additional ports, 2 USB 3.1 Gen1 headers with expansion up to a total of 4 additional aforementioned ports. There are 2 RGB LED connectors and NZXT has included 2 x RGB LED strips. These can be controlled by the NZXT Hue+ digital controller software to pimp up your system. The board also features CAM software support and includes 7 x 4pin fan headers which is nothing short of impressive. It’s easy to see that the NZXT N7 Z370 is aimed towards style aficionados that take cooling seriously. 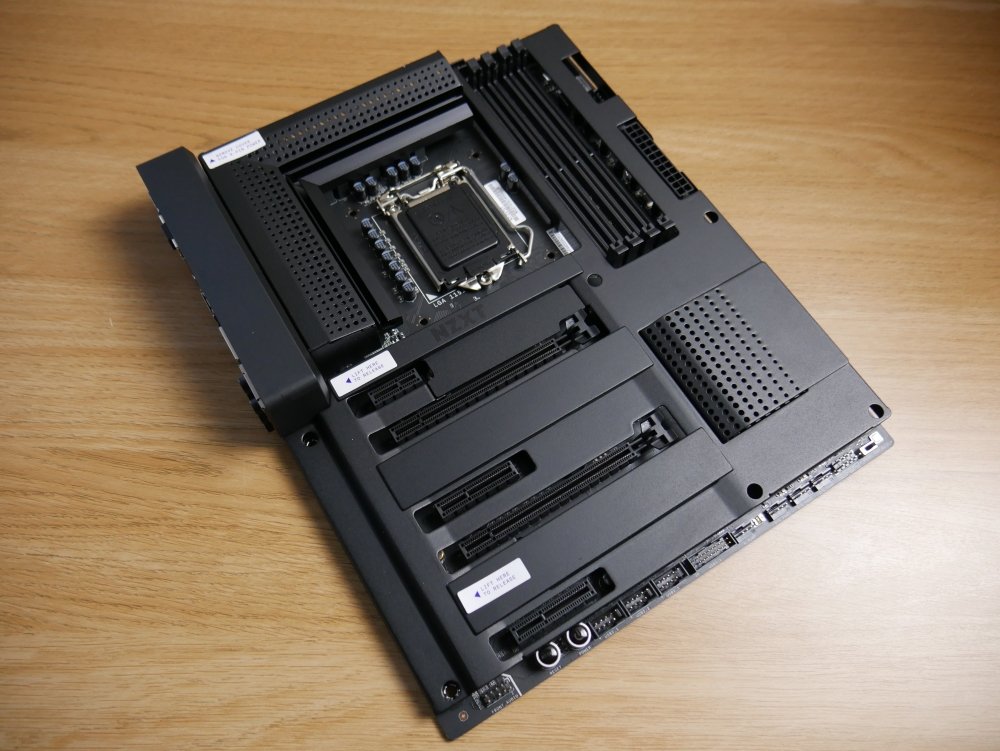 The N7 can be customised with different covered covers for the VRM heatsink and PCH areas with purple, blue and red colour panels. These are available to purchase directly from the NZXT website for £14.99 here – https://www.nzxt.com/products/n7-z370-matte-black. 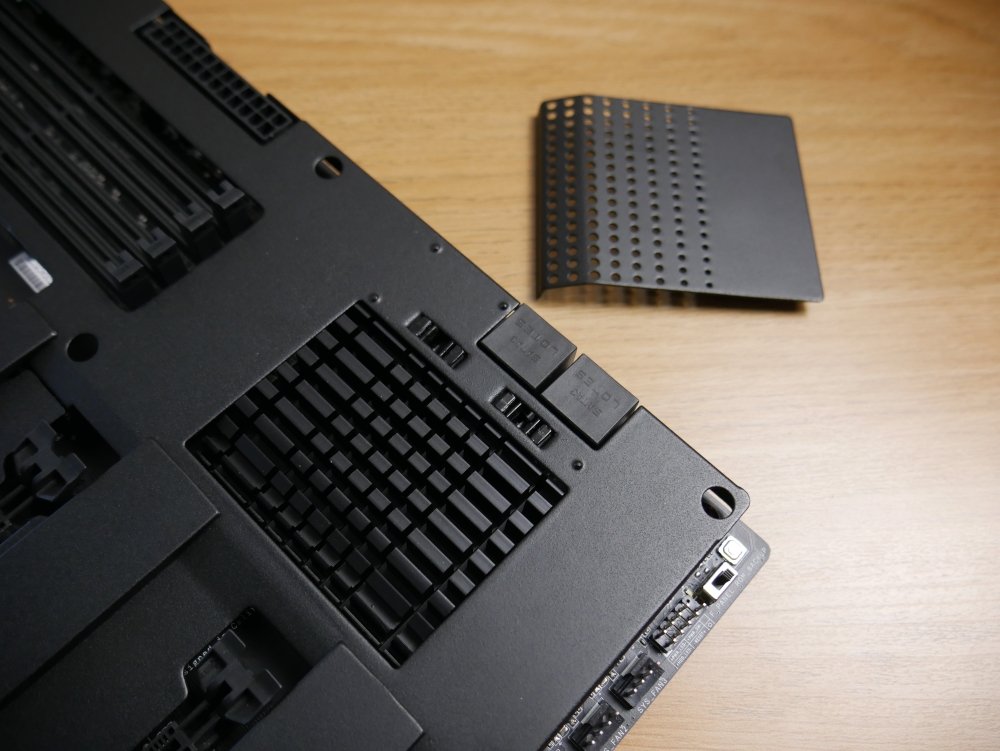 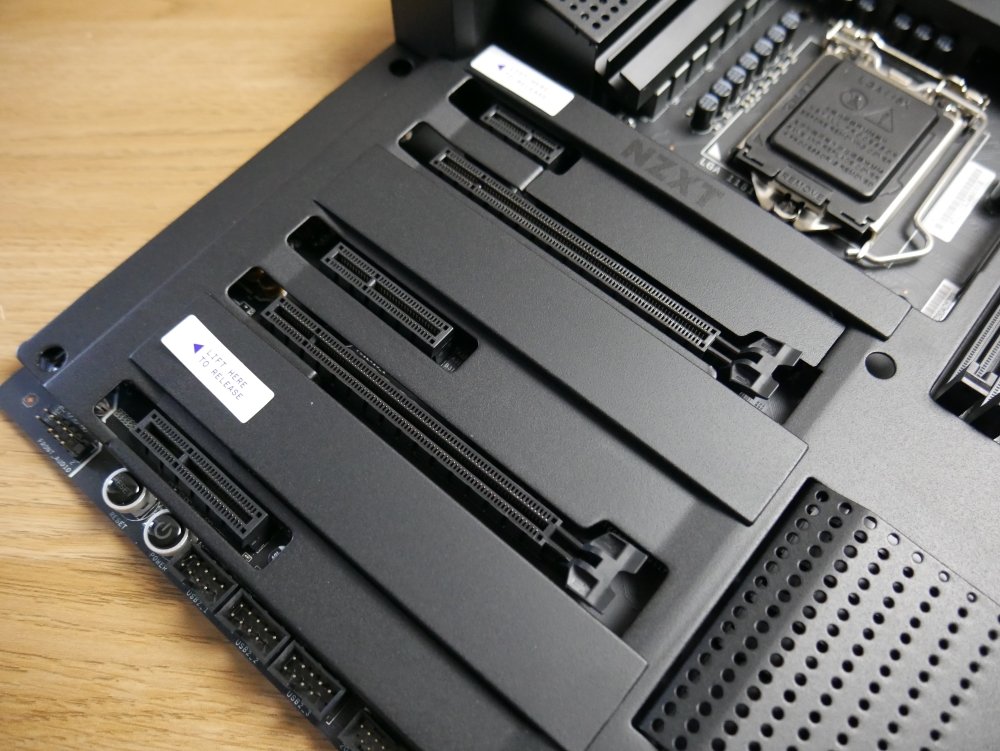 Across the bottom of the PCB, NZXT has provided onboard buttons for resetting and powering on/off your system. There is an LED debug post underneath the bottom removable cover which I find rather odd, given it’s something you would want on display, especially if you’re having booting problems and want to find the root cause of the issue. Also featured are a dual BIOS switch and a ROM backup button.

For the VRM, NZXT and ECS have gone with a 15-digital power phase design which features average quality Infineon ICs which are found on more mid-range motherboards. Now it should be noted that this particular motherboard isn’t designed primarily for overclocking, although there is no reason at all that this board shouldn’t do well in the overclocking stakes. The phase itself uses doublers which is very normal for boards in this day and age to use, especially to give the high number of phases that boards currently advertise. The VRM controller of choice is the 8-phase Infineon IR35201. 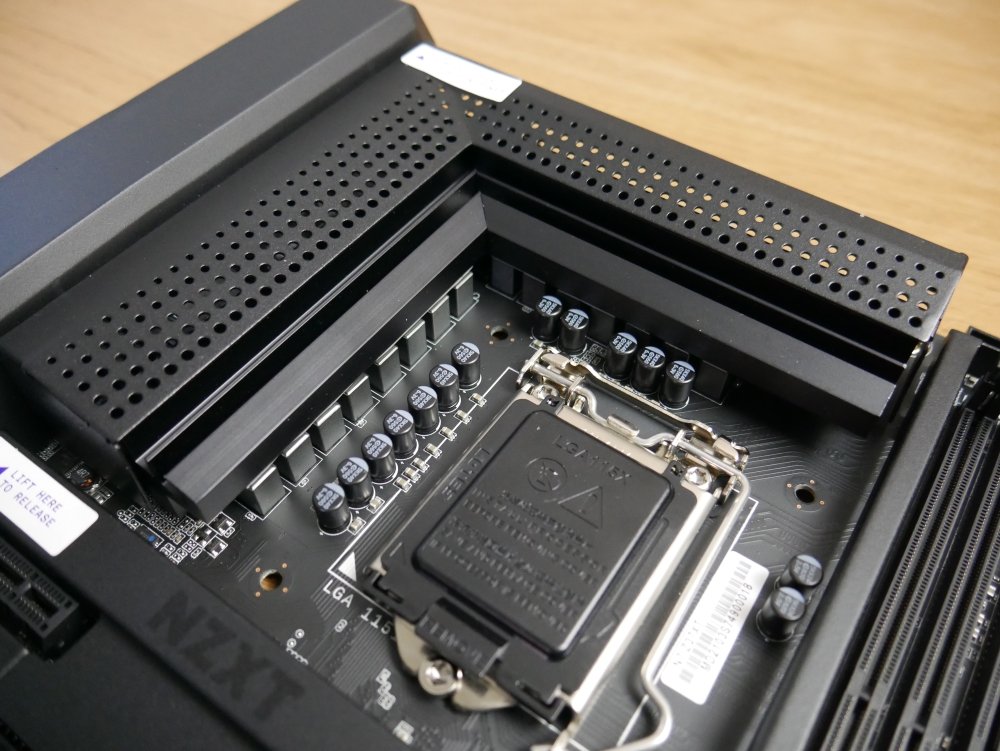 The board has 4 x DIMM slots and has support for a maximum of 64GB of DDR4 memory with speeds up to 3866MHz OC. The N7 is fully supported by Intel’s Extreme Memory Profile (XMP 2.0) technology and memory kits with this feature (pretty much all kits) can take advantage of one-touch memory overclocking. 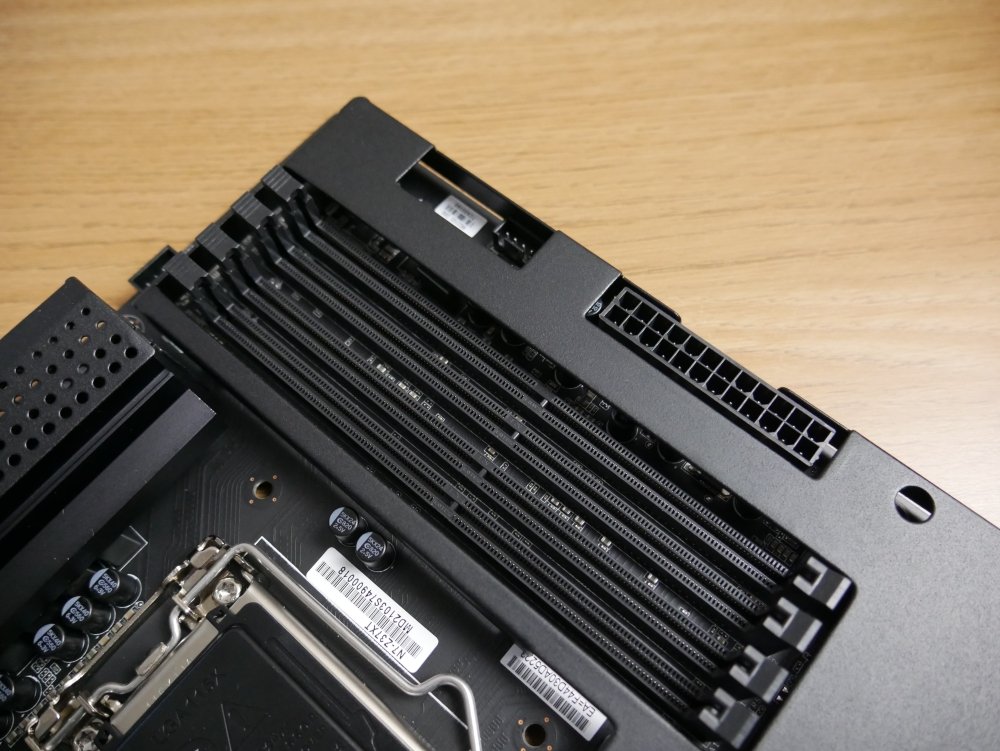 With the rear I/O, we have the following connections, inputs and ports:

The audio is powered by the usual suspect in the form of the Realtek ALC1220 codec and the isolated PCB area does feature a wave of Nichicon gold capacitors specifically designed for audio. The single Ethernet port is controlled by the Intel I219-V Gigabit LAN.

Quite a nice amount of USB ports has been provided, but I’m a little lost at the decision to omit any USB 3.1 Type-C connectivity, as well as any USB 3.1 Gen2 ports. For the board’s retail price, I would have expected both to be a feature, let alone none. However, it is good to see that a DisplayPort and an HDMI input has been included. 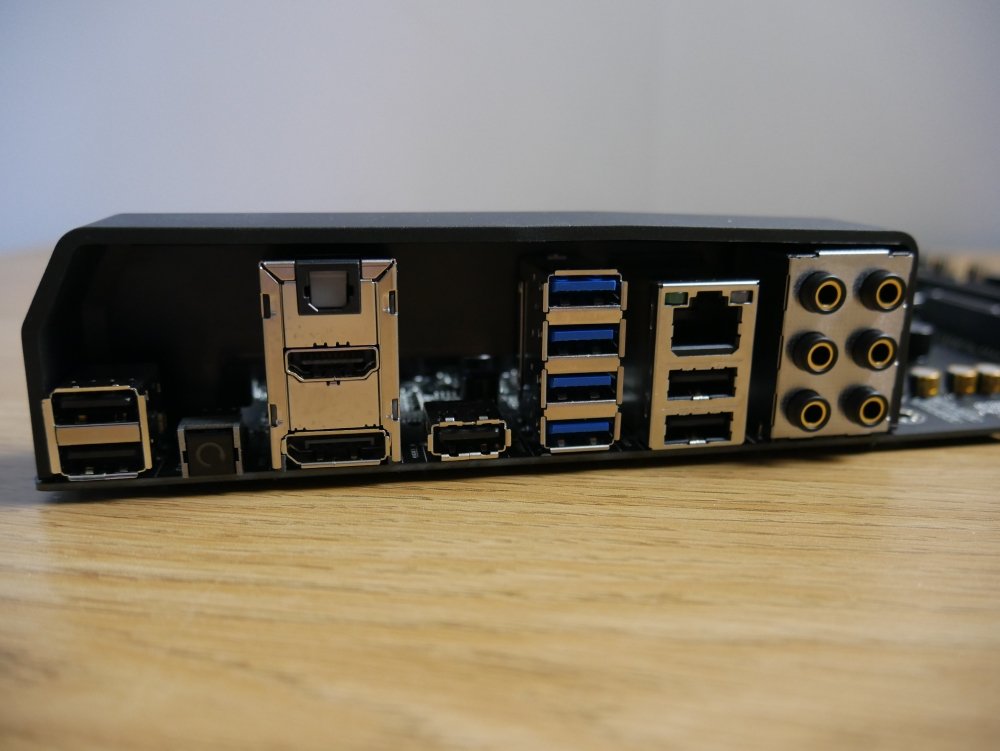 One of the most interesting things is the all metal full PCB cover (except the RAM slots) and a lot of questions have been asked of NZXT on the actual creator of the N7 Z370. The OEM of choice is ECS and this has caused a bit of a stir with consumers. Now ECS isn’t exactly known for their high-end offerings, but they do perform well at their price level and it’s going to be interesting to see how the N7 performs in comparison to other Z370 motherboards. Without the PCB covering, the PCB itself looks relatively bare and basic which isn’t necessarily a bad thing, but for a board costing £280, one could expect a little bit more. 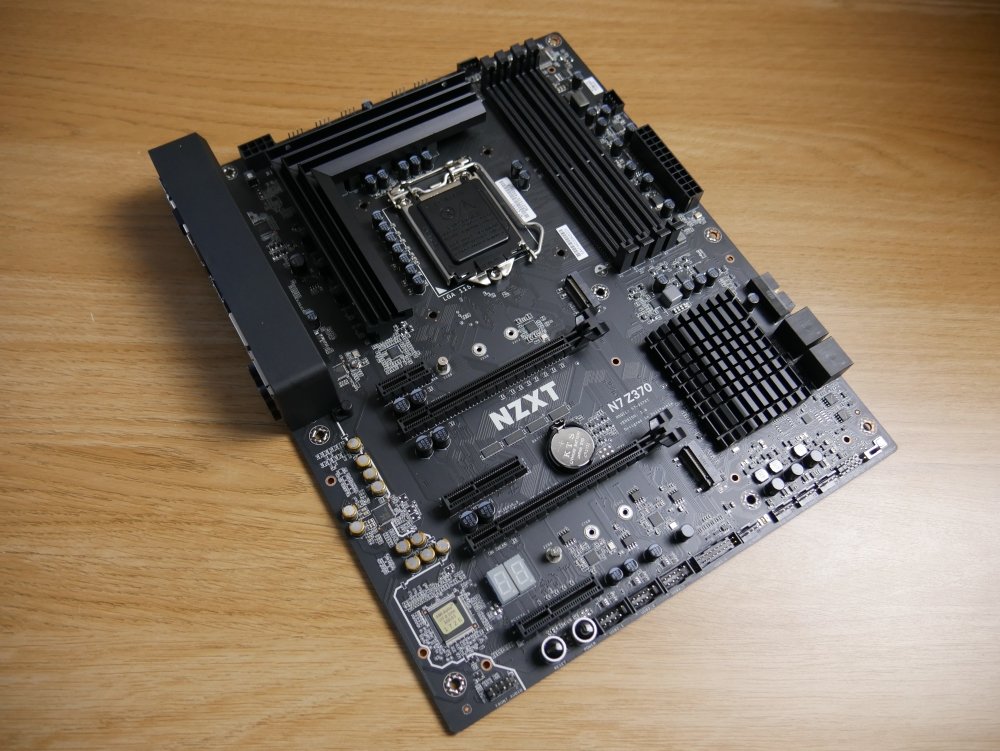 One glaring issue I have is the decision to hide the LED debug underneath the full cover panel. Of course, you can remove the bottom panel and have it out, but I guess NZXT have given you, the user, the power to have it on show or not as in your hands. 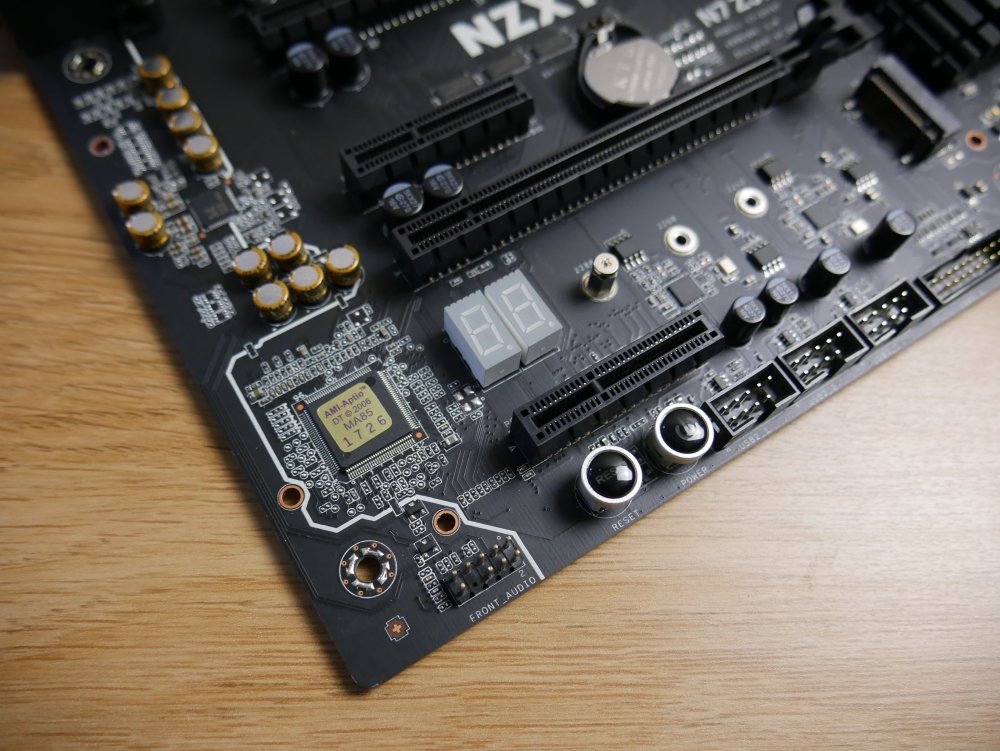 On the VRM area, NZXT/ECS have put a seriously beefy and heavy full metal heatsink to cool the MOSFETs and chokes. This is one of the more substantial heatsinks found on a Z370 motherboard from the ones we have seen, and this is a good thing! 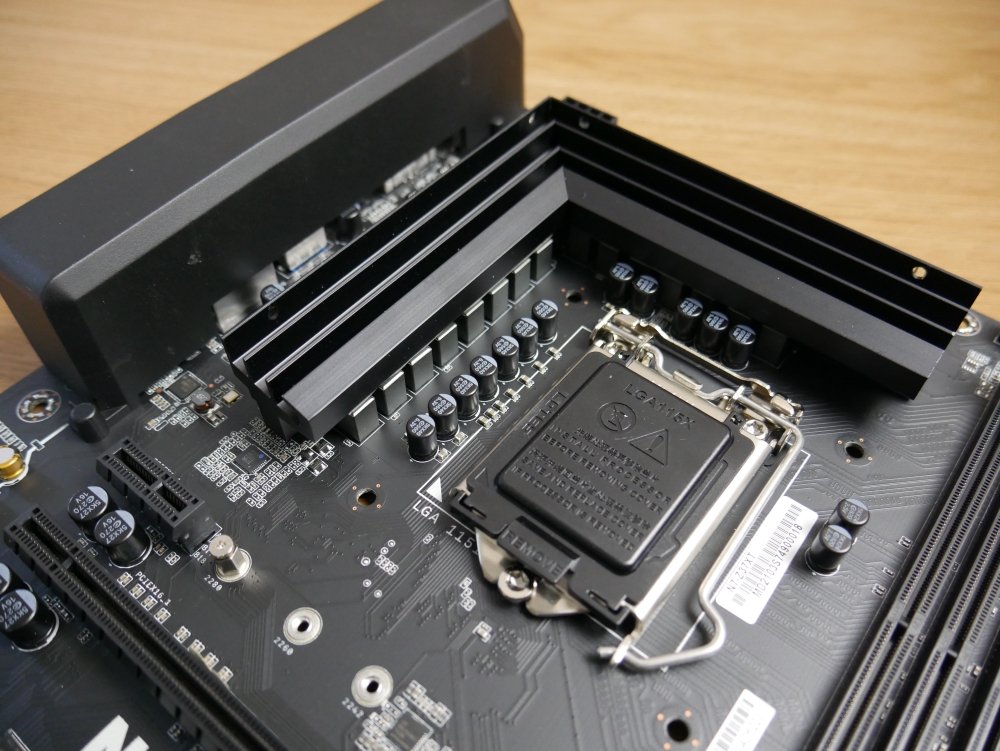 The board has a total of 4 x SATA3 ports which is disappointing and NZXT/ECS could have done more given that the Z370 chipset supports up to 6 x SATA3 ports natively. There seems to be a common trend here of NZXT/ECS omitting basic and regular features of a premium motherboard. 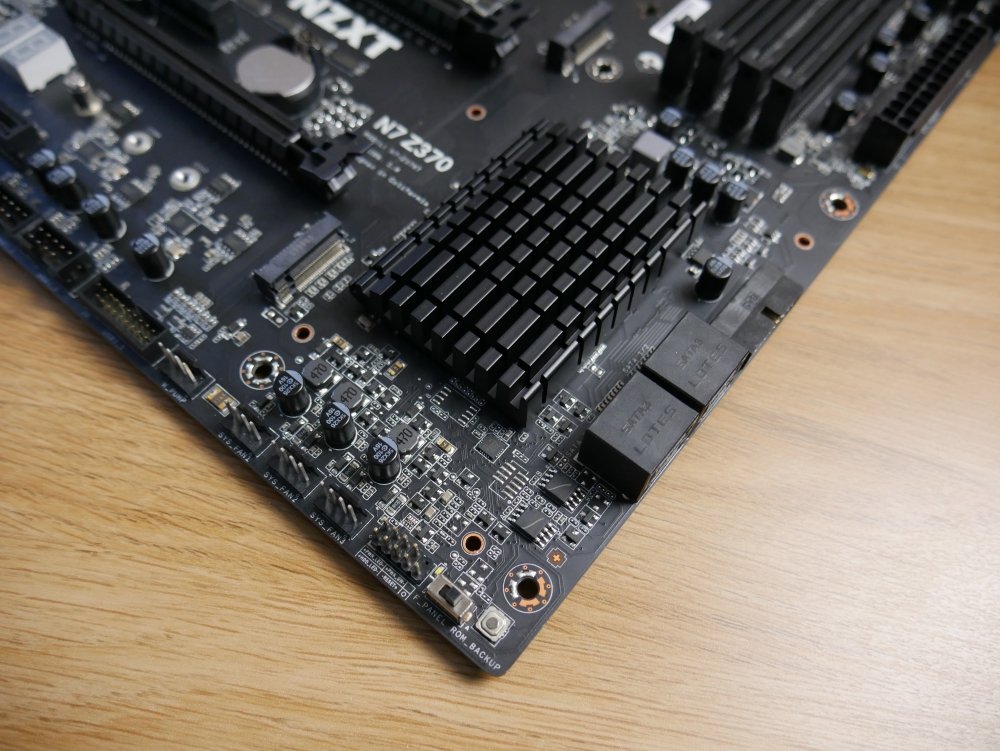 Overall the NZXT N7 Z370 looks like it’s a very formidable opponent to some of the bigger boys on the market. The biggest question though on people’s minds is surely to be ‘how does it perform?’ – Well, that’s the question I intend to answer because without performance, the great style shown from NZXT means diddly squat.

In the interest of fairness and to show real-world performance, the processor was left at stock. All of the motherboards and processors saw in the graphs below are set with multi-core enhancement enabled (on supported models) and are at the mercy of the motherboard itself.

It needs to be stated that NZXT hasn’t intended this board to be used for enthusiast level overclockers to push performance, but I still expect a reasonable amount of headroom due to the 15 phase VRM, albeit using doublers and with the price being relatively high.

Using the NZXT American Megatrends BIOS was pretty straightforward and in the advanced mode, the BIOS does look pretty simple. I had issues with the N7 like a few others have had when it comes to getting the board to actually apply the settings to the BIOS. There wasn’t an option on the product page to download a new BIOS, but I do expect a newer revision to come very soon.

To overclock beyond 4.5GHz, I had to use Intel’s XTU utility which with means Intel’s SpeedStep needed to be enabled. I managed to overclock my Intel Core i3-8350K to 5.1GHz, although I did run into temperature issues. I also noticed slight fluctuations in clock speed when at full load. Whenever I would set a defined voltage such as 1.3v or1.35v, there was a variance of + 0.2v to 0.3v in whatever voltage setting I inputted in comparison to CPU-Z. The board does perform great though, even though naysayers are criticizing the use of ECS, who actually do produce decent motherboards, just not to the standard that the high-end enthusiasts crave for the best possible performance/overclocking performance. 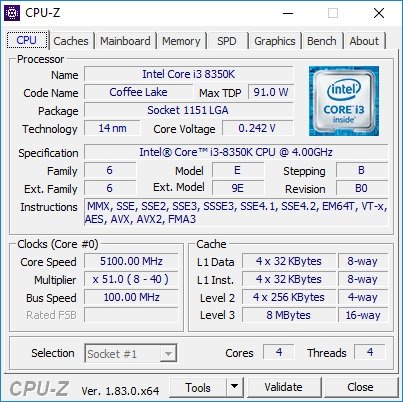 The ECS OEM might be a negative to some, but the N7 is backed by a 3-year warranty and the performance was great across our range of testing. I believe the board is a solid offering for users who actually do like the overall design. There are plenty of other premium Z370 options available within the same price range, so the price could be a bit lower to reflect this to make it more competitive on the market.

Pricing aside, however, the NZXT N7 Z370 is a fantastic offering which most important of all is competitive with other brands. ECS has done a decent job on the PCB and performance at a component level, and NZXT has done a phenomenal job at injecting something fresh into the motherboard arena; something the market has needed for quite a long time. The oversight of no USB 3.1 Gen2 on sub £300 motherboard is a little hard to ignore and the absence of a Type-C port is a little disappointing, but what the N7 does well, it does very well in hindsight. You have to judge things on what it has got as opposed to what it hasn’t, but this doesn’t mean that I believe NZXT and ECS should have thought harder about the overall design, despite its beautiful aesthetics.

With a built-in fan hub with support for up to 7 fans in total on the board, and with CAM and Hue+ RGB software support, I believe NZXT’s first PC component is worth shouting about. Sure, there are a couple of pitfalls highlighted in the ‘what’s not’ section, but the BIOS and overclocking issues is only a BIOS fix away and providing NZXT/ECS do this, the N7 is a winner in my eyes… and oh boy, isn’t it gorgeous? 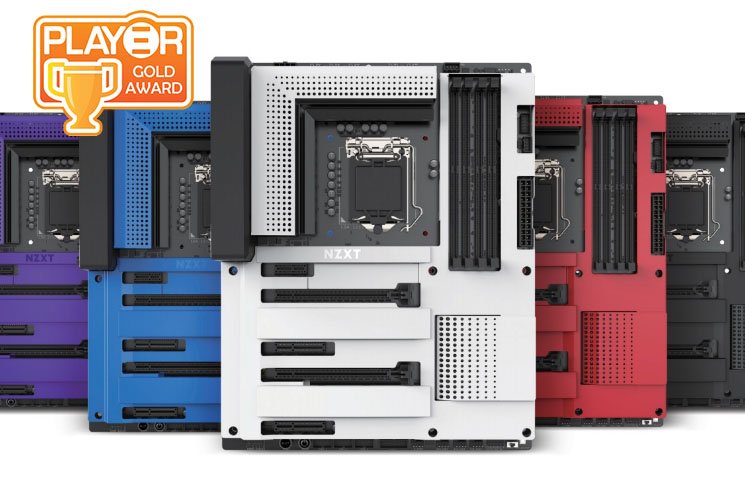 Huge thanks to NZXT for sending a sample of the N7 Z370 motherboard in for review. 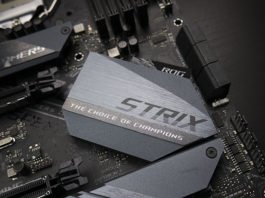