Hi all, today I’m here with my first gaming router review for Play3r. NETGEAR has sent over their Nighthawk Pro Gaming XR1000 router for me to take a look at. The XR1000 is Netgear’s third pro gaming router and their new flagship which comes running DumaOS 3.0, a router OS developed in partnership with Netduma. 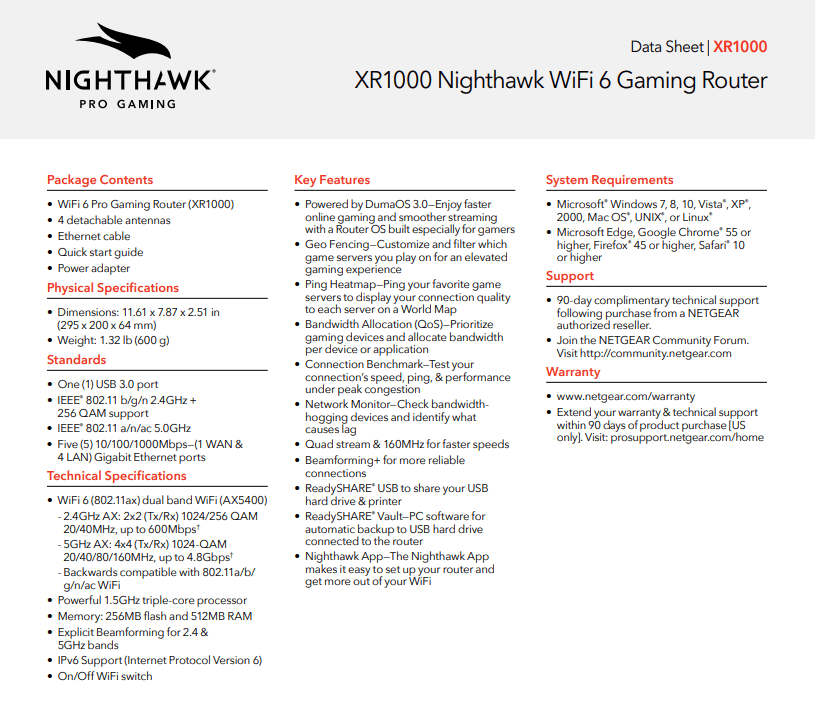 The NETGEAR Nighthawk XR1000 pro gaming router is a feature-rich and performance-orientated router, there’s no doubt about it. With a decent triple-core SOC and radios, with strong & stable Wi-Fi 6 features like MU-MIMO, OFDMA, 160Mhz channel support, 1024 QAM, Beamforming, additional DFS channels and Smart Connect, one of my favourite features.

NETGEAR Armour is another feature that needs to be mentioned. I get it’s a premium option, but competitors are offering a package included with the router, for the life of the router. Then again, once the 30-day trial is finished there’s no obligation to renew. That being said, paying for the product also gets you “unlimited” device protection so it’s not just a router package, this makes it a much more compelling option for anyone looking for an all-in-one device and router protection package for their household. At £59.99/$69.99 per year, it’s not a cheap package, but again, does provide router and device protection which includes smartphones, laptops, and PC and Mac computers.

Finally, the Nighthawk and DumaOS mobile apps are available for Apple and Android devices, and are neat additions for making basic changes and can also be done remotely which is awesome. In the Nighthawk app, you can also add and remove the aforementioned Netgear Armour service.

With good testing results across the board and features gamers, even the pros, will love thanks to the DumaOS 3.0 such as Geo-Fencing which custom blocks servers outside its range, Ping Heatmap which pings your favourite game servers to display your connection quality to them, Bandwidth Allocation which prioritises gaming devices and allocates bandwidth per device or application & the Traffic Controller which blocks traffic by device or application on a schedule.

So with that information, is the Nighthawk Pro Gaming XR1000 for you? Well, if you are:

You’ll find this router a must-have. At £349 or $349, at the time of writing, the Nighthawk Pro Gaming XR1000 is a substantial outlay. But for the gaming optimised and feature-rich options the XR1000 offers it walks away today with Play3r’s Gold Award.

Then consider the Nighthawk RAX120 I reviewed on the channel recently as an alternative.

Big thanks to NETGEAR for sending in the Nighthawk Pro Gaming XR1000 for today’s review.

Play3r - Jun 4, 2014 0
Today I am taking a look at the TP-Link AV600 3-Port Powerline Adapters and seeing how they hold up vs WiFi connections. How did they do? Come read the review and find out.
Go to mobile version
%d bloggers like this: