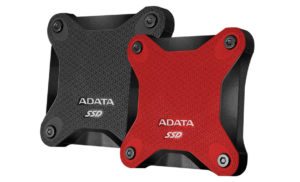 True to its athletic look, the SD600 delivers 440MB/s read and 430MB/s writing capabilities. Even in the best of circumstances, internal and external mechanical hard drives cannot hope to come close to that. Approximately four times faster than spin drives, the SD600 shortens load times and results in smoother performing games and applications whenever quick asset streaming is essential.

Within the SD600 lies 3D TLC NAND Flash technology. ADATA and the industry as a whole are moving to 3D/stacked memory, as it offer increased density, reliability, and longevity compared to older 2D/planar memory products. The SD600 is available in 256GB and 512GB capacity configurations.

For sprints and marathons

Thanks to the integration of performance-sustaining DRAM cache and SLC cache, the SD600 does not slow down or throttle when faced with heavy operational loads or large files. SLC cache is of particular interest, allowing a portion of the drive capacity to operate in pSLC mode (pseudo single-level cell), which is great for handling high priority operations.

The stylish and sporty SD600 weighs only 90g, less than half the weight of even the lightest external hard drives available and it can easily be placed in pockets or backpacks thanks to its slim build. Connecting to devices via USB 3.1, the SD600 is fully driver-free compatible with Windows desktops and laptops, Xbox One, PS4, and Android. It is made of impact resistant materials to add a layer of protection against drops, falls, or bumps experienced in active lifestyles.

Gaming is bigger than ever – and its growth is only...

Play3r - May 8, 2018 0
For the past 30 years, gaming has been an everyday part of our lives, from loading games from tapes or floppy disks, to today's online gaming with online multiplayer functionality
Go to mobile version
%d bloggers like this: