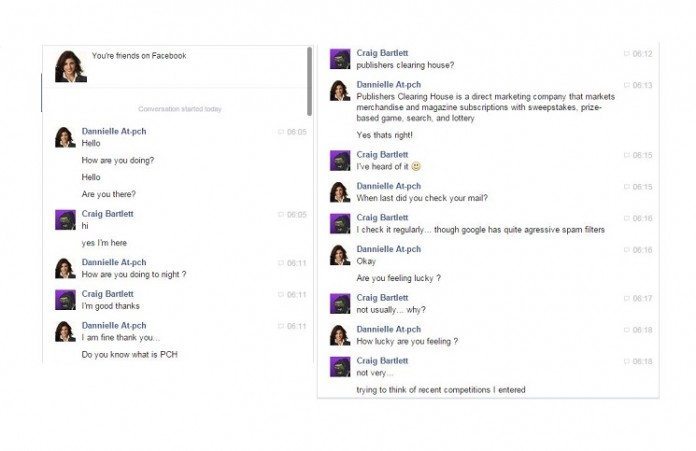 It’s amazing the lengths some people will go to get hold of your hard-earned cash. Whether it’s creating an awesome new ‘must have’ product and flogging it for a whacking great price (*cough* Apple), providing an essential service and overcharging for it’s delivery (like my water bill) or simply by trying to force you to hand it over and get nothing in return because of ransomware and other nastiness or telling you that you have won a prize and that you need to pay a fee to collect it.

The last example of paying to receive a prize isn’t new by any stretch of the imagination. If you’re old enough to remember a time before the internet was a thing, then you will probably also remember seeing those scratch cards that got mailed out by the million. Those ones that gave you a chance – usually a 100% chance – to win a prize, and then all you had to do was call a premium rate number and stay on the line forever to see that you had actually won a coupon for money off a holiday that was still more expensive that just popping down to your local Thomas Cook. There was of course a way to claim your winnings by sending a stamped, self-addressed envelope to the organiser and they would eventually tell you what you’d won; but faced with the chance to get a new car or a silly amount of cash, most victims opted for the quick option even if it cost them money. After all, with a few hundred thousand pounds coming to them, who would worry about a £25 phone call? Back then this would be over half my weekly rent, to put things in perspective. Another dubious practice came when receiving the dreaded Reader’s Digest letter – because even though it was stated throughout the documentation that you didn’t have to purchase anything from their catalogue, you still would end up doing it because they sent those two reply envelopes. One said I’m a winner and I’m willing to spread my wealth, the other said I’m cheap and you can leave opening this till the last possible minute and it doesn’t really matter if you don’t actually enter me into the draw. At least that’s what it said to me. But that in itself isn’t a scam, it’s just very clever marketing. And across the Atlantic, Publishers Clearing House (PCH) operates a similar prize draw in order to market their services and products with a chance to win a fortune just for taking part, even if you don’t buy anything.
Just to be clear PCH is a real company, they provide real products and services and operate a real prize draw that people really do win… and just like Reader’s Digest you DON’T have to buy anything to enter the draw. Now we get back to scams. You will understand my surprise when I received a Facebook friend request from Dannielle at PCH. She gave me the thrilling news that I was the next PCH mega prize winner. I had to do a Google search at the time to find out what the heck my new friend was talking about having not heard of PCH before, but low and behold, she told me that their publicity team was on its way to me. Amazing right?
For the record, Danielle Lam (spelled correctly) is a real staff member at PCH, she’s the one who travels around giving out the prizes.

I smelled a rat… it started with the way ‘Dannielle’ was talking to me lots of “Do you feel lucky?” and so on. Well, I wasn’t feeling that lucky, I’d looked at the brand new Facebook profile, with 3, then 5, then 11 new friends… before all friends were magically hidden from each other, and I explained that it looked suspiciously like a scam. Her reply was to throw out incredible amounts of prize money; telling me that I’d won a couple of million dollars, along with some money every week for life and a car. Just how much shiny new tech could I buy with that cash? My suspicions of a scam were swept under the carpet, never to return… yeah, right, but that’s what she must have thought.

The biggest giveaway about this scam however was from the front page of that Google search result. The text automatically filled in as PCH Scam so I went with it and saw the link to PCH’s scam awareness page. They warn about these exact same tactics and highlight that PCH don’t notify winners by Facebook, or even tell them at all before they are confronted in the flesh. Seeing my chance to have a bit of fun I played along, telling my new friend that I was speechless, astonished, and all other descriptives.

And so, along with some basic personal info easily obtained about me online, I allowed her to have my phone number. I did try many times to give my skype info rather than my phone number but ‘she’ was having none of it. On with the tale. I received a phone call almost instantly (this was all around 5am) from a chap – I’m going to call him Gilbert because I don’t know his real name, nor do I really care – he claimed that he was ‘Dannielle’s colleague’ though it’s more likely that it was all the same person. He was calling from Jamaica (even though PCH is actually in New York, USA) and he really wanted to get me hyped about my winnings – something that’s hard to fake when your family is asleep upstairs and you’re way too tired to bother – so I feigned speechlessness and that seemed to work… Quickly his PAYG mobile ran out of credit and the line went dead. Gilbert became the online persona Dannielle once more and ‘she’ tried to get me to call back… like that was going to happen. I was happy to play their game up to a point, but I’m sure as hell not making any international calls, so again I suggested Skype but this was a no-go. I never understood why Gilbert refused to use Skype, since it’s free, can be set up almost anonymously and the call quality is more than reasonable – much better than a Jamaican mobile calling the UK at any rate judging by the previous attempt.

Gilbert called back, explaining that he had borrowed a colleague’s mobile (why not just use the company landline phone?). He wanted me to pay $1800 to receive my prize, and told me that if I didn’t pay then instead of the prize coming to me today it would go to the next person on the list. This fee was for taxes as well as the delivery charge for my new BMW car. He warned me that everyone was in the airport in New York and as soon as I agreed to pay they would be boarding the plane to ‘my area’, then asked where I was which was a little suspicious, but who cares, $2m and a car etc.

This almost seemed reasonable, except as a UK citizen we don’t normally pay any tax on competition winnings, and anything that was due would be sent to HMRC instead of some dodgy geezer in Jamaica. Instead of explaining my reluctance I simply said I can’t raise that much before the prize team arrive, and could maybe send $150. With that massive discount I was expecting at least some haggling from Gilbert, but he was pleased… a little too pleased… and accepted without hesitation explaining that I should go to the nearest Western Union store and send the money to him. “Ok,” I said, and reminded him that it was still 6am on the UK, and that he was going to have to wait 3 hours till mu kids were in school before I could make the transfer. He was ok with this, and although he called a few more times in the next few hours to ask if I’d made the payment, “Nope, the shops are still closed here, I’m in the UK remember, you will have to wait. How about Paypal instead? or Bank Transfer?”, he was patient until around 8.30am, but delayed another hour or so.

He then started ringing me constantly, along with sending with photos, allegedly taken from the plane, of Heathrow Airport and very soon afterwards the Concorde statue outside the airport through the Facebook persona. Oh My Gosh, they were here, they were really here, they were going to give me loads of cash, I only needed to send them $300 (it had gone up by now) by the Western Union.

“Er, Gilbert, How did the team manage to travel from JFK Airport to Heathrow in 2.5 hours?” I asked, amazed at the speed they crossed the Atlantic. Last time I did it, it took around 6 hours and that didn’t include check-in or customs/immigration. He said 2 words… Private Jet! “Oh really? That’s faster than the Concorde and that’s been decommissioned… I’m not aware of any supersonic private jet!” He didn’t bother to reply, and though I tried a few more times to goad him into conversation he seemed to know that the jig was up and he might as well move on to the next muppet. Well, that’s what I thought, but at 5am the following morning I received more phone calls on my mobile from Jamaica, apparently the team was still in the UK and did I transfer the money yet? No, I didn’t, I just blocked his number and went back to sleep.

The moral of this story? Feel free to have some fun with the scammer if you are so inclined, but never hand money over to receive a prize unless you know that you entered a competition and the rules of that draw stated clearly that you would have to pay to receive your winnings. There were so many holes in Gilbert’s story that it could have been used to strain spaghetti, and that’s the thing. You may well see yourself blinded by the promise of cash or whatever prize, but if you keep your wits together it’s easy to avoid being the victim of this or any other scam.

Like I said earlier, this is not a new scam, and it’s certainly not the only one. Have you been targeted recently, maybe with a call from ‘The Windows Department of Your Computer’ or whatever? Let us know how you dealt with it. The best tips and funniest answers each wins 2 million internet points… but no BMW.

Dave McMahon - May 18, 2018 2
The sun is shining in the UK, and the temperature is rising (for now anyway!), and to celebrate Overclockers UK have launched some sizzling offers!
Go to mobile version
%d bloggers like this: