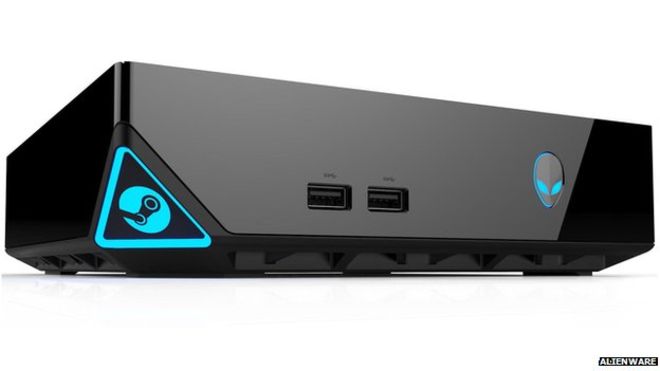 The first Steam Machines – an attempt to bring PC gaming to a wider audience – are available to pre-order.
PC makers Alienware and Cyberpower have both announced machines that will be sent out to buyers in October.
Several Steam Machines will be out this year, an attempt by games publisher Valve to compete with consoles such as the Xbox and PlayStation.
Many analysts are not convinced it poses a threat to those well-established brands.
Steam is a hugely popular gaming platform and shop for the PC market. In September 2013, owner Valve announced it was to work with manufacturers to develop Steam Machines in the hope it would encourage PC gaming in the living room – a domain all but sewn up by consoles.
‘Expensive’
“I don’t think it will disrupt the established order in the living room,” said Piers Harding-Rolls, head of games research at analysts IHS.
“Our view is that it will be a good few years before the price point and performance equation for Steam Machines means they will compete significantly with consoles.”
Valve Steam Machine controller
Steam Machines are designed to be played with Valve’s custom controller
Alienware’s machine will cost $449 (£300) while Cyberpower’s will be priced at $499. However, buyers will need to wait until November, and pay extra, to use Valve’s official Steam Machine controller which features two haptic-feedback trackpads.
The controller has been designed as an alternative to the typical PC gaming set-up of keyboard and mouse.
Both machines can be souped-up to offer more hardware power.
Mr Harding-Rolls questioned the companies’ strategy.
“Who is going to buy an expensive Steam Machine today?
“Steam users who are power users of Steam and spend lots on PC and want to connect it to the TV… a good proportion will have done that already. So I think the opportunity here is relatively small.”
‘Robust market’
However, games analyst Nicholas Lovell told the BBC that Steam Machines may be able to capitalise by iterating more quickly than the established games consoles which are typically not upgraded for several years.
“Steam Machines aren’t locked down once every six years,” he said.
“There will be iterations. There’ll be early adopters – within a year, that will have been improved. Those iterations will happen at speed.”
While sales of desktop PCs have declined in recent years, PC gaming is still robust.
“If you look at spending on the PC platform, it’s the biggest platform, by spend, globally. Steam as a platform is in rude health.”