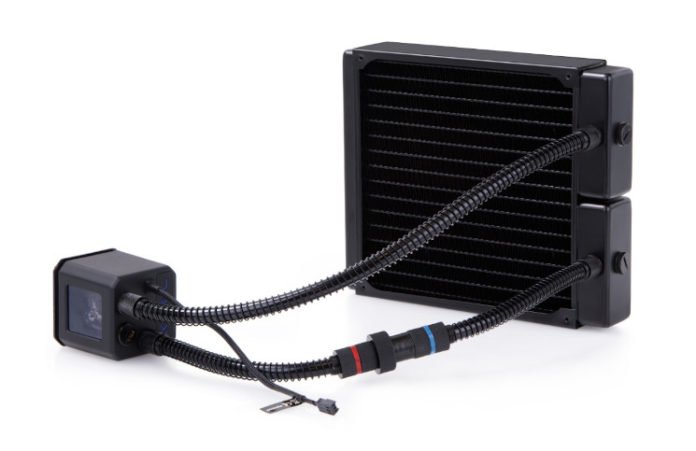 Have you ever wanted a single-fan liquid cooler that was just… bigger? Maybe so big it matches 280mm-class coolers for radiator area? Alphacool might well have you covered. The Eisbaer 200 CPU is a 200mm AIO with a big, square radiator for all your big, square needs.

Alphacool’s Eisbaer series of all-in-one watercoolers aims to be the ‘best of both worlds’. Using standard G1/4″ fittings and a refillable reservoir as part of the pump and block assembly, the Eisbaer retains the flexibility offered by a fully custom water loop with the convinience of an all-in-one unit. Bringing this point home, Alphacool have even offered the “Eisbaer Solo” block unit to use in custom loops.

This modularity is how Alphacool are making the Eisbaer 200 CPU. Whereas other manufacturers make complete sealed units, Alphacool can just unite their Eisbaer all-in-one pump/res/block with their 200mm radiator.

2013 was a long time ago now, and things were different back then. AMD’s R9 290X was the “Titan Killer”, Intel made the fastest CPUs, and 3D films were still popular. Plus, 200mm fans were the next big thing. 2013 was also when Play3r was founded, and some of our earliest coverage was a case supporting 200mm fans. But this is 2020, and RGB lighting outshines 200mm fans. So why release a 200mm AIO now?

Well, just because it’s not the most fashionable doesn’t mean there’s no use for 200mm fans. By making the fan bigger, it can get lots of airflow at a very low speed. This all but eliminates bearing noise. In terms of wind noise, the large blades on a 200mm fan generate more of a low woosh than a high-pitched hum. The end result is more like enjoying a sea breeze on holiday, and less like living near an airport.

Cube cases are still widely available, which take a Mini ITX or Micro ATX motherboard and lie it flat. By its nature this leaves a big square space at the front, and cases like the Bitfenix Prodigy and Raijintek Aeneas take advantage of this to allow a 200mm fan as a front intake. We’ve reviewed both of these at Play3r and the Bitfenix Prodigy earnt an Editor’s Choice award back in 2014. Alphacool are offering an easy, compact way to take such cases, still available today in OCUK’s cube case section, and build a watercooled system in them.

As with other Alphacool products the Eisbaer 200 includes quick disconnect fittings for easy expansion with an Eisbaer Ready GPU watercooler or radiator. This is a feature our own Craig Bartlett will be testing soon, not with a 200mm aio, but with some similar Alphacool products.

ZOTAC To Show Off Latest Products at CES 2016

Gavin Campbell - Jan 5, 2016 0
News has been announced by mini PC masters, ZOTAC, that they will be hosting a showroom at CES 2016!
Go to mobile version
%d bloggers like this: