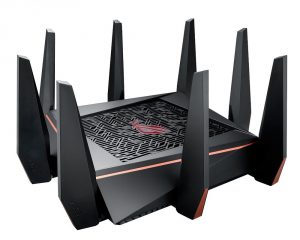 The new router benefits from a number of innovative features to make gaming easier, and gameplay faster and smoother than ever. Chief among the gamer-friendly is Gaming Center, which provides an instant overview of the gaming network, so players can see at a glance the current internet status and stability, know how many gaming devices are online and what apps or games they are running. Gaming Center also helps gamers to control their network easily, with many one-click options; and it also shows server ping speeds for popular games from all around the world.

GT-AC5300 is the first gaming router to offer users three levels of game acceleration. Two of the eight LAN ports are dedicated gaming ports that prioritize network traffic to devices connected to those specific ports. The router also has a Game Boost feature that works in conjunction with two dedicated gaming ports to prioritize gaming traffic for the best networking speeds, as well as individual speeds for each connected gaming device. Users also have the ability to set up a private gaming network, to accelerate the connection between the router and preferred game servers. 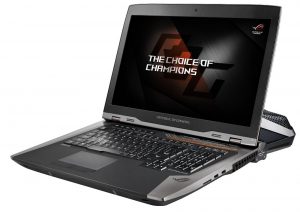 G752 is built to win with unbeatable performance, driven by an unlocked Intel Core i7 processor and a VR-ready NVIDIA GeForce GTX 1070 GPU. G752’s high-speed DDR4 DRAM is overclocked to run at 2800MHz. It also offers HyperDrive RAID 0 and the latest NVM Express™ (NVMe) and PCI Express® (PCIe®) technologies for blazing-fast storage speeds, ROG-exclusive 3D Vapor Chamber for effective and efficient cooling for up to 7°C-cooler GPU temperatures, and a 120Hz panel with NVIDIA G-SYNC technology for super-fast 120Hz refresh rates on its wide-view panel. The world’s first backlit anti-ghosting keyboard with 30-key rollover complete G752’s roster of headline features.

G701 is engineered for ultimate speed and unrivaled performance, with an unlocked Intel Core i7 processor and a VR-ready NVIDIA GeForce GTX 1080 GPU. G701 boasts overclocked DDR4 DRAM at 2800MHz, HyperDrive RAID 0 and NVMe and PCIe technologies for blazing-fast storage speeds, and a 120Hz panel with NVIDIA G-SYNC technology. G701 is finished with a premium Bio-Armor design and the new ROG Armor Titanium with Plasma Copper color scheme. 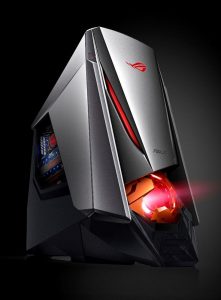 ROG GT51CH features dynamic ASUS Aura lighting effects for its central air intake and motherboard-mounted LEDs. Gamers can customize Aura with different lighting colors and effects to reflect the feel of the game that is currently being played, or to show their own unique style. ROG GT51CH also has an ESS® SABRE headphone digital-to-analog converter (DAC) and amplifier that delivers 32-bit/384kHz output for immersive, dynamic sound with tight, defined bass and minimized noise for incredible gaming audio.

G20CI is a deceptively powerful small-form-factor (SFF) gaming PC, housed in a compact 9.5-liter chassis. G20CI can be specified with up to the latest 7th Generation Intel Core i7-7700 3.6GHz processor, and up to NVIDIA GeForce GTX 1080 graphics with 8GB GDDR5 VRAM for extreme gaming performance and exceptional in-game visuals. It also features full Microsoft DirectX® 12 support. G20CI isn’t just powerful; it runs whisper-quiet at just 22dB at idle and has an efficient heat-management system, including two internal fans and copper pipes to dissipate heat.

GD30 has a brand-new look, with a unique customizable design featuring interchangeable black and white front panels so gamers have the freedom to express their style. It features an up to 7th Generation Intel Core i7 processor and NVIDIA GeForce GTX 1080 graphics for unrivalled performance. And of course, it has the cooling performance to go with all this firepower — ASUS engineers created an intelligent thermal solution to effectively cool the system, with large front and underside air intakes for increased airflow and more efficient cooling. The latest ASUS Aegis III software enables gamers to monitor system performance, as well as tune and control other system parameters. All new ASUS gaming desktops feature Aura RGB lighting on the motherboard, which can display millions of colors and multiple effects, adding unique style to gamers’ systems. Additionally, the cooling fans are ringed with red LEDs for a colorful accent.

GR8 II is the smallest gaming PC built for VR, and has the most advanced graphics in its class — offering full-on performance with a desktop-grade ASUS-customized NVIDIA GeForce 1060 GPU, 7th Generation Intel Core i7 processor, and 32GB DDR4 memory. The PC is housed in a tiny four-liter chassis and includes Aura Sync for stunning RGB light shows that can be synchronized with a variety of ROG peripherals, and with 10 different effects. GR8 II can be specified with blisteringly-fast M.2 PCIe SSDs and a 2.5-inch SSD/HDD storage for both increasing game boot-up speeds and hosting a large game library. Two VR-friendly HDMI ports enable simultaneous connection of both a VR headset and a gaming display. ROG GR8 II has a specially-tuned cooling system with an optimized airflow design, copper heat pipes and dual fans to purge heat from the system. Cleverly-designed vents and dedicated chambers for the processor and graphics card ensure the right amount of airflow to each component to provide you with stable performance for non-stop gaming marathons. GR8 II also comes with renowned audio performance with ROG SupremeFX, Sonic Studio III, and Sonic Radar III. In addition, GameFirst IV and Intel Gigabit Ethernet provide gamers epic gaming experiences. 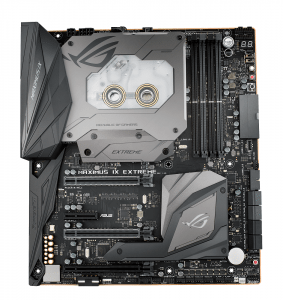 Based on the latest Intel Z270 chipset and ready for the new extreme-performance 7th Generation Intel Core (‘Kaby Lake’) processors, ROG and ROG Strix gaming motherboards are packed with world-leading innovations and ROG-exclusive technologies to deliver epic performance in for all gamers. The ROG lineup includes Extreme, redefined for water-cooling veterans and gamers who demand cutting-edge technologies, Formula for performance-hungry gamers and modders that want to dip their toes into custom water-cooling, and Hero for everyday gaming brilliance, The new additions are Code, a stylish motherboard made for those who love to mod, and Apex, a high-end performance-driven motherboard to appeal to power-user overclockers and gaming enthusiasts. 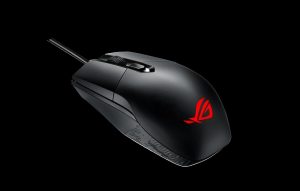 ROG Strix Magnus is an all-new gaming microphone with three studio-grade condenser capsules for enhanced clarity and sensitivity — and the very first mic from ROG. Designed for live-streamers and avid gamers, Strix Magnus is both compact and stylish, and is also the industry’s first gaming microphone to offer both environmental-noise cancellation (ENC) and customizable Aura RGB lighting effects. The new gaming mic has an auxiliary port for recording audio from a musical instrument or smartphone, and comes with an external USB hub for connecting additional devices.

GX970 is a wired gaming mouse featuring a detachable side panel for optimized button layouts in different gaming scenarios. The standard side panel has two thumb buttons that are ideal for light gaming and general computer use. This panel can be switched with the included 10-button thumb panel that is perfect for quickly issuing commands during intense gaming action. GX970 also features onboard memory and intuitive companion software that lets gamers create and store up to three different profiles for optimal performance in different types of games. Additionally, adjustable tracking speed can be set from 50–12,000 DPI and a customizable weight system allows gamers to change the weight of the mouse based on their personal preference. 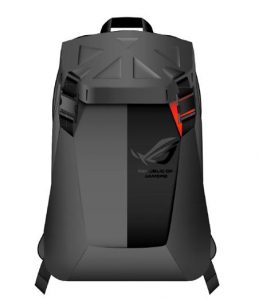 Designed for gamers on the go, the Shuttle 3 Backpack is ROG’s third-generation carry case and is able to accommodate laptops with displays of up to 18 inches. It includes ample interior storage space and a built-in fast-draw laptop sleeve, making it easy to remove the machine in moments. Shuttle 3 also has an easy-reach pocket for mobile phones and a special security compartment for other essentials.

The ROG Premium Backpack has an asymmetric, modular design with an internal suspension system and well-padded compartments that offer great protection, keeping the Premium Backpack’s contents safe from everyday knocks and bumps. Its durable exterior is manufactured from a water-resistant polyurethane to provide protection against the elements.

2 Features vary according to model