TAIPEI, Taiwan, August 8, 2017 — The latest generation of high-end desktop motherboards has arrived from ASUS Republic of Gamers (ROG) and it’s been more than worth the wait. Based on the new Intel® X299 platform, the ROG Rampage VI Extreme and Rampage VI Apex motherboards are designed to help gamers and enthusiasts get the most out of their PCs.

ROG is the leader in motherboard design and innovation. Our engineers tailored the Rampage series for different priorities: Rampage VI Extreme lives up to its name for drool-worthy dream machines with custom liquid-cooling and ultrafast networking, while Rampage VI Apex unabashedly targets peak game performance and record-breaking overclocking.

Both Rampage boards share the same DNA — essential features that enthusiasts in the Republic of Gamers crave. That starts with critically acclaimed overclocking and cooling controls for liquid and air. There are dedicated pump headers for powering custom loops and all-in-one coolers, plus intelligent fan controls for optimal efficiency and quiet acoustics. Sensor grouping lets your cooling react to a mix of workloads, including GPU-heavy gaming via direct temperature monitoring for select graphics cards.

Tuning your gaming PC is easy whether you want to perfect your setup with manual tweaking or automatically configure and overclock the whole platform with a single click using our class-leading 5-Way Optimization utility. Gaming PCs provide unprecedented options to express your style, including through personalized lighting. The RGB LEDs embedded on our boards are augmented by headers for multiple RGB LED light strips to illuminate your system, your way. All the lighting is part of our Aura Sync ecosystem, which synchronizes harmoniously across compatible ROG graphics cards, peripherals, and monitors, along with other components from our partners.

Equipped with the latest generation of SupremeFX integrated audio, the new ROG X299 motherboards boast enhanced recording quality for streamers who want their voice to come through clearly. Graphics cards plug into reinforced SafeSlots that protect against damage from heavy GPU coolers and rough handling.

Intel’s VROC technology combines with our optional add-in card to enable insane M.2 RAID arrays made up of a stack of parallel drives with a direct line to the CPU. You can hit ludicrous speeds with enough capacity for overflowing game libraries. You get all the latest I/O, including USB 3.1 Gen 2 with Type-C™ ports and internal headers pushing speeds up to 10Gbps. Onboard Wi-Fi and Intel Gigabit networking are standard equipment, and you can add Intel’s new Optane™ memory as a high-speed cache. 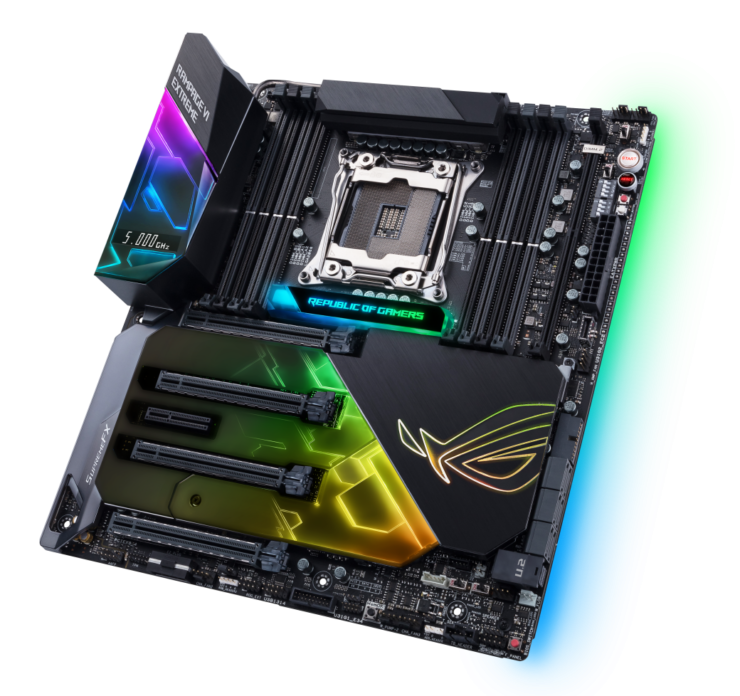 The flagship of this new family is Rampage VI Extreme, which balances power and design to elevate showcase PCs. It’s made specifically for machines with custom liquid cooling. Along with all of the usual fan and pump headers, we added a flow header that lets you monitor the coolant coursing through your loop. There’s also a special connector that lets water blocks designed for the Extreme provide flow, temperature, and leakage data.

Almost every aspect of Rampage VI Extreme has been enhanced to give you more. The Intel Gigabit Ethernet controller is bolstered by an onboard 10Gbps (10G) chip capable of increasing networking throughput by an order of magnitude. We’ve also upgraded the Wi-Fi to the latest 802.11ad standard, increasing wireless bandwidth up to 4.6Gbps.

To help avoid unsightly wiring, three M.2 SSDs can be added to the board without using the VROC card. One slots under the Extreme’s outer skin, while the other two ride our DIMM.2 module next to the memory slots. The onboard Thunderbolt™ header lets you extend high-speed connectivity to external devices with our optional add-in card.

New for X299, Rampage VI Extreme integrates a LiveDash OLED screen that lets you monitor system temperatures, frequencies, and fan speeds right on the board. The dashboard also displays custom messages and graphics to add a little extra flair to your build. It’s complemented by enough onboard LEDs and addressable strip headers to put on a show. 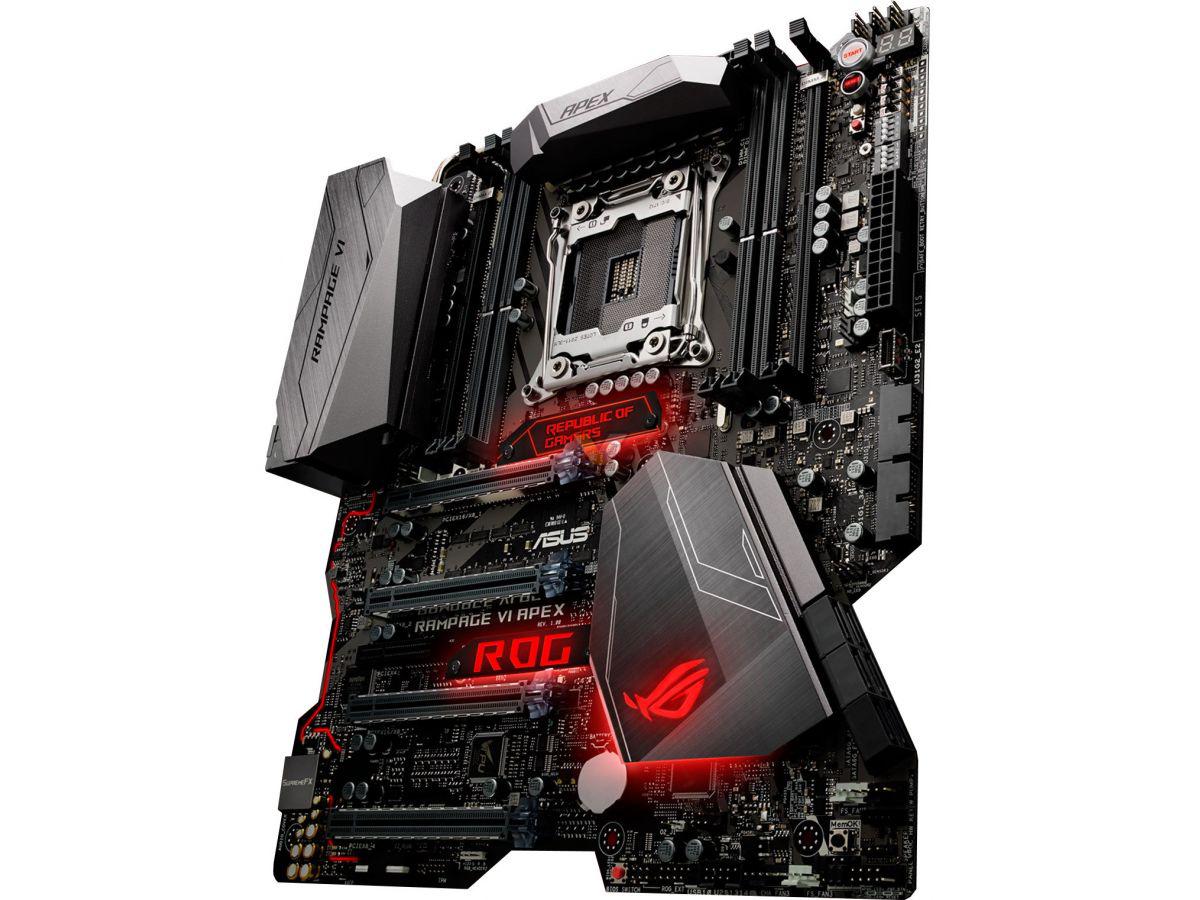 The ROG commitment to pursuing the highest overclocks and top performance manifests in Rampage VI Apex. This model is purpose-built for setting records at sub-zero temperatures — not just with LN2, but also with exotic liquid helium. Our overclocking experts have already used Apex to set seven world records and 16 global records. The Rampage VI Apex board hit the highest CPU frequency for an Intel Core™ i7 processor with 7.562GHz on all four cores and eight threads. Expect more records to fall as we cement the ROG legacy as the absolute performance leader.

Less is more on the ragged edge. Apex has only one DIMM slot per channel, which allows optimized trace routing that can improve stability with the fastest memory kits. You can load the board with 64GB of DDR4 memory running at blistering speeds and extremely low latencies. Memory is flanked by dual DIMM.2 slots that take up to four M.2 SSDs between them.

Rampage VI Apex proudly wears its attitude on its sleeve — or rather PCB. The distinctive shape visually sets Apex apart from the competition, while the customizable name plate provides space to add a personal touch. You also get the latest I/O, including USB 3.1 Gen 2 with Type-C ports, onboard Wi-Fi and Intel Gigabit networking plus SupremeFX audio technology for those times when you want to game instead of setting records.

A refined foundation for your ultimate build

ROG does more than just offer checkbox features — we take the time to ensure each one is empowering for enthusiasts and accessible for beginners. Both Rampage motherboards provide gamers and enthusiasts the powerful tuning, cooling, and personalization options for an incredibly potent platform that pushes PC performance to the cutting edge. It is this attention to user needs that defines the Rampage Series — and the hallmark of ROG engineering and design.

For additional information, product images and specifics on each Rampage board, please check out our launch article at ROG or visit ASUS. For an in-depth look at X299 overclocking and the team behind the records, please visit us at ROG or view our X299 OC event video at ROG YouTube.