In 2015 we reviewed the Fractal Design Define R5 here at Play3r, giving it the Gold Award.  Dave Hicks praised the cable management room, clean lines and well thought out interior. Cooling performance and noise were also impressive. Now, 4 and a half years later, the Fractal Define 7 and Define 7 XL have launched as the latest update to an acclaimed series. These familiar-looking cases have a host of small changes that Fractal describe as “the most comprehensive refinement of design elements yet”.

How Fractal’s Define 7 differs from the R6

It’s easy to look at the Fractal Design Define 7 and think it looks a lot like the Define R6.  In fact, let’s do that.

This isn’t, of course, a fair way of looking at it. Firstly, when we’ve praised the look of the Define series, why shouldn’t this update keep that look? Secondly, we’re looking from the angle they look similar from. Taking the black and white versions with tempered glass windows as an example, the differences become clear. If you look at how the cases can be taken apart they’re even clearer.

So, the white highlights on the black and white version are in different places now. Plus there’s a lot more;

The Define 7 also keeps the silence-focused design and flexibility the Define line is known for. Models come with either a solid side panel or various tints of tempered glass, and you can read more on the Fractal Design website. 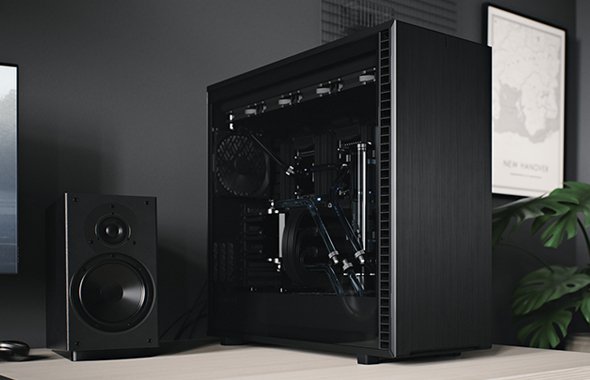 Fractal have also launched the huge new Define 7 XL. This greater size allows for E-ATX and SSI-EEB motherboard support, meaning even dual processor boards like the ASUS WS C621E SAGE are supported. For storage, the XL goes up to a massive 15 3.5″ drives in dedicated bays, with more 3.5″ and 2.5″ mounts elsewhere. Like it’s smaller sibling, the Define 7 XL is available with either a solid side panel or various tint levels of tempered glass. Again, you can read more on the Fractal Design website.

The Define 7 series are available worldwide including from overclockers.co.uk in the UK and from newegg in the US.