Tuxedo Computers have announced the InfinityBook Manjaro, a premium-segment laptop preloaded with Manjaro Linux. As well as the OS, Tuxedo replace the ‘Windows’ key with a Manjaro-themed super key. Plus €0.00 of the sale of an InfinityBook Manjaro goes to Microsoft, something Linux enthusiasts will welcome.

For the uninitiated, Linux – also known as GNU/Linux – is a Free alternative to Windows. That’s not free as in “free lunch” (although it rarely costs anything). Rather it’s Free as in Freedom – users have total control over the system. This goes as deep as being able to examine, modify and recompile the source code at will. Linux itself is the kernel – the core of the system – and GNU is a set of core utilities that make it a functional OS.

Because GNU/Linux is so flexible, there are a lot of different OSs based on the Linux Kernel and GNU core utilities. Manjaro is one of these. Manjaro Linux – which is based on Arch Linux, by the way – tries to be a middle ground for more experienced users. That means enough low-level control to both break things and fix them again, while still trying to be user-friendly.

Linux-based systems are popular among people who have become frustrated with the lack of control in Windows 10. Most games are still designed for Windows first, and DRM systems often require Windows. However, compatibility tools exist and a majority of games now work on Linux. Valve’s effort to improve Linux compatibility has been ongoing since way back in 2013, but community tools have existed for much longer. For people more interested in coding or system administration, Linux is a perfect platform and the vast majority of the server world relies on Linux.

Spec-wise the Tuxedo InfinityBook Manjaro has a 15.6″ 1080p screen, 54Wh battery good for up to 12 hours at idle, a slim 19.9mm z-height and a 1.9kg weight. Networking comes from a Realtek gigabit ethernet chip and Intel Wireless-AC 9260, specced for up to 1.73Gbps combined throughput. The wireless card also provides Bluetooth 5. 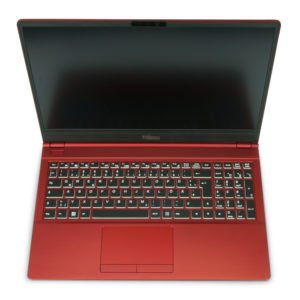 The keyboard on the Tuxedo InfinityBook Manjaro is fully featured, using the full width to include a numpad. The touchpad is slightly offset to support this, keeping buttons away from palms. 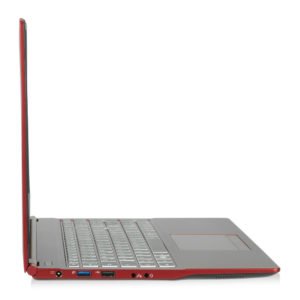 On the left-hand side of the laptop we see the charging port, a USB 3.1 Gen1 Type-A port, a USB 2.0 port, and headphone and mic ports. 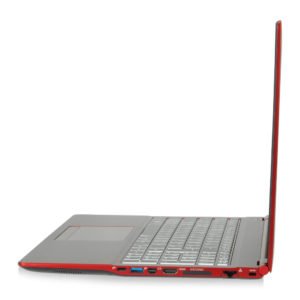 On the right-hand side we see the rest of the ports. USB connectivity comes from a 3.1 Gen1 Type-A port and a 3.1 Gen2 Type-C port. Display is available from an HDMI 1.4b port, a DisplayPort 1.3 port, and via the USB Type-C port. The Type-C port also supports charging, and Thunderbolt 3 including external GPUs. We also have a card reader supporting SD, MS and MMC, the ethernet LAN port, and a kensington lock. 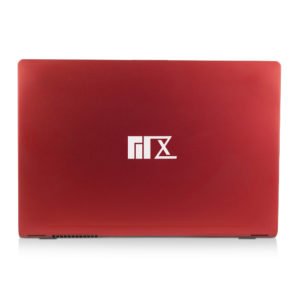 From the back we see the cooling vent, and a red lid with the Manjaro Linux logo.

It’s worth noting that Tuxedo’s battery implementation does a couple of special things. Firstly the battery is user replaceable with only light disassembly, which shouldn’t be special but is. Secondly, Tuxedo’s FlexiCharger bios option allows the user to set their own minimum and maximum charge levels. Lithium batteries are worn out by either being run right down, or kept excessively full for prolonged periods. Tuxedo give their users the control to keep the battery working well for longer.

The InfinityBook Manjaro is available now directly from Tuxedo. Prices start at €1099 for the base configuration, with an i5-10210U and 8GB of single channel memory. The 16GB dual channel option is only €45 more at €1144. An example high-end configuration, pairing a 1TB NVMe SSD and 32GB of dual-channel memory with the i7-10510U, would bump the cost to €1549.

Craig Bartlett - May 2, 2018 0
After considering feedback from the community regarding their original Wooting One keyboard, they have now announced a full sized 'two' version with an upcoming Kickstarter campaign.
Go to mobile version
%d bloggers like this: