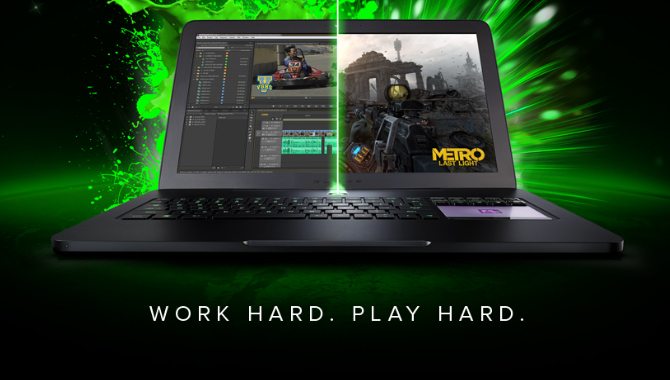 A potential competitor to console platforms? Razer thinks so as they release their latest gaming laptop, the Blade!

2cm depth, 2kg weight, 14-inch in size, NVIDIA GeForce GTX 870m GPU, 4th generation i7 with 8GB RAM, it seems that the laptop shows its true glory in the fantastic spec on offer. The Razer Blade is considered a huge competitor with the next generation consoles out on the market already but will it compete? The true essence of amazement comes in the size we stated a little earlier, 2cm in depth, yes 2cm! Razer is claiming the Blade to be the world’s thinnest gaming laptop and the spec isn’t restricted by the super sleek size of the platform.

The all-aluminium casing on the Blade conceals some pretty impressive specs and the physical looks of the laptop look good too but in the gaming world, most of the time it isn’t looks but performance. The spec looks just over that provided by the PlayStation 4 and Xbox One so this small portable device may be a headline in the gaming market for some time! Screen quality is a large talking point too as a 3200×1800 pixel resolution on a 14-inch display is something that truly stuns regarding graphics.

As a summary, the laptop is set to be a big competitor and portable alternative to other platforms. With the ability to run games such as Titanfall in high resolutions without grinding to a halt, a truly amazing size and look, amazing specification and not too shabby price tag of $2,199 (£1,320), the Razer Blade will go on sale in the US very soon with the UK to HOPEFULLY follow as Razer have not yet specified on the UK availability. But would you buy?