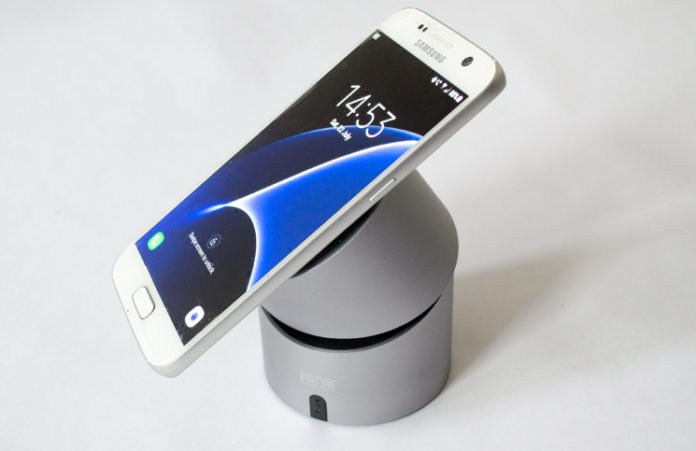 Here at Play3r we’re always on the lookout for new tech and new ways of using old tech, so when todays review product arrived on my desk, I was eager to get started. Bluetooth speakers are not anything we haven’t seen before, but this speaker also incorporates a phone stand and a Qi wireless charger, which definitely puts the MusiQi Wireless Charging Speaker from Fone Salesman in the unique product category. Of course, with so many products combined in one unit it should be awesome, but only if all three work seamlessly. To that end, let’s get down to business and take a look at what features you get for your money. 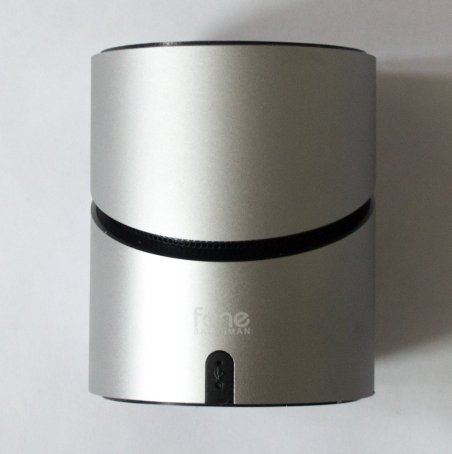 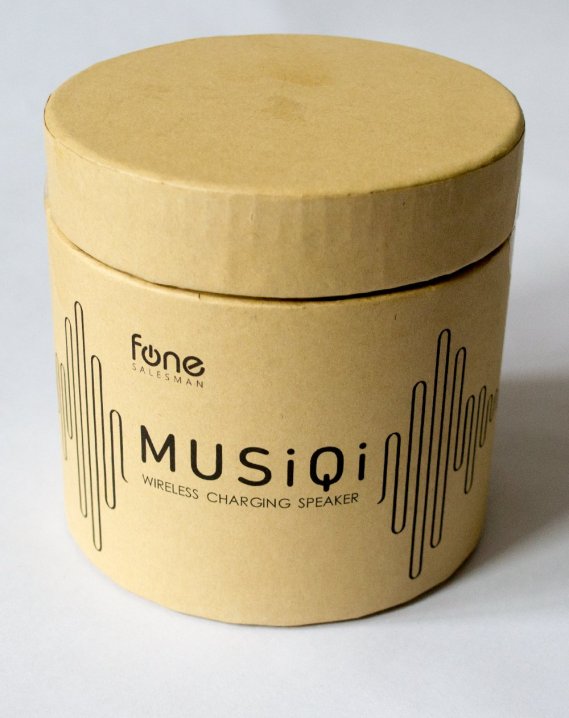 Starting with the box and there’s not a lot of bling here; the MusiQi speaker comes in a serviceable box with removable lid in the same shade of buff as those uninspiring envelopes used for bills with black text and graphics. There’s no photo to hint at the design of the MusiQi, but on the back there is a fairly comprehensive list of features, contents and those all-important conformity marks. 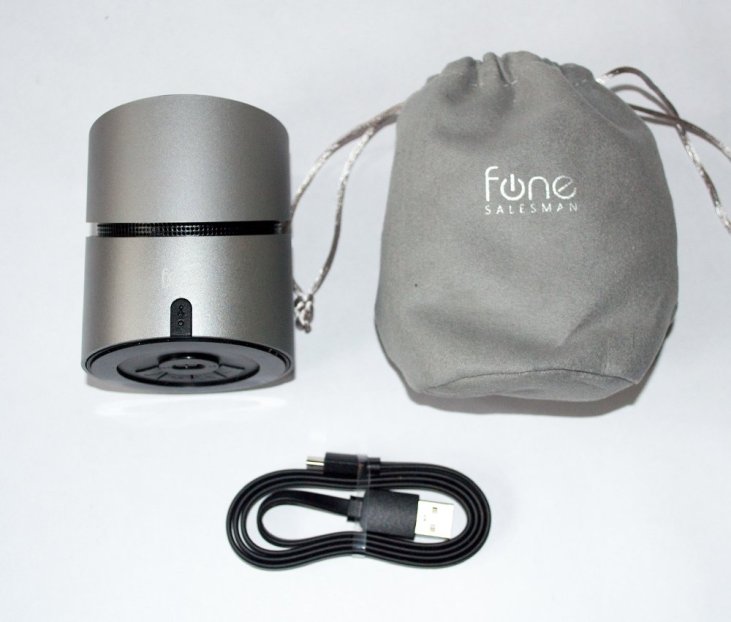 Inside the box and things get better with the speaker and USB cable contained within a grey cloth travel pouch with drawstring closure. Also included is a user guide written in English only, as well as a separate 2 year Warranty card. 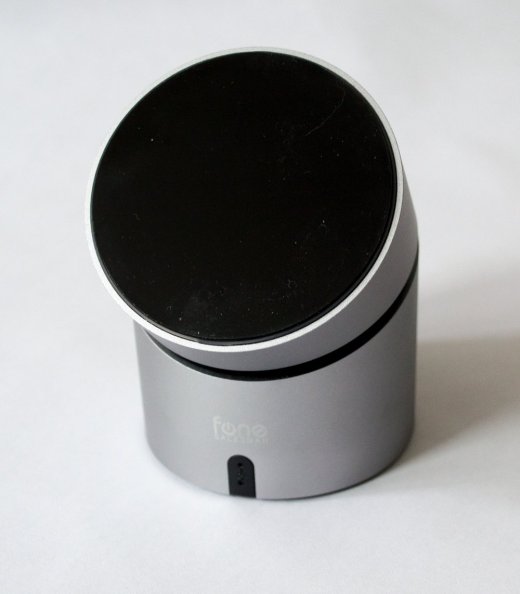 Taking a closer look at the speaker, the top features a black micro-suction mat so that your phone doesn’t slide off when charging or being displayed. The body is a grey textured aluminium column that’s split into two halves at an angle. Connecting the two halves is a black wire mesh through which the speaker projects sound 360° around the unit, so no fear of being sat at the wrong side in a group. The top section swivels and as it does, the angle of the micro-suction mat changes so that you can display your phone screen facing you while it’s on charge.

On the bottom section you find the only branding on the device at the front, as well as a simple microphone and multi-function LED indicator. 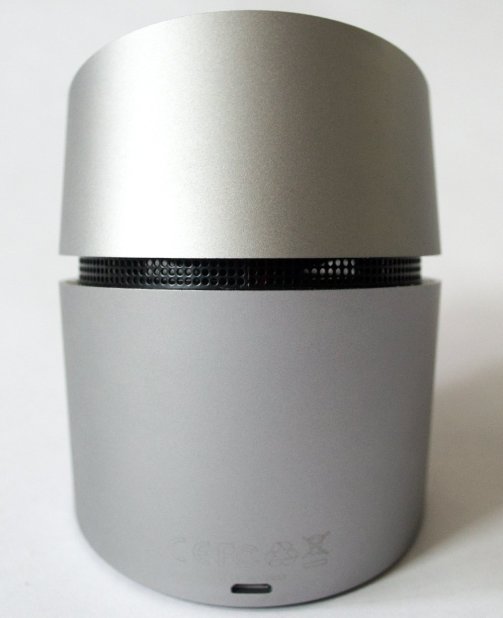 Around the back is the micro-USB port and those safety & conformity logos are also repeated, though they have managed to blend them in to the base colour nicely making them almost invisible from just a meter away (and frustratingly hard to pick up on camera). 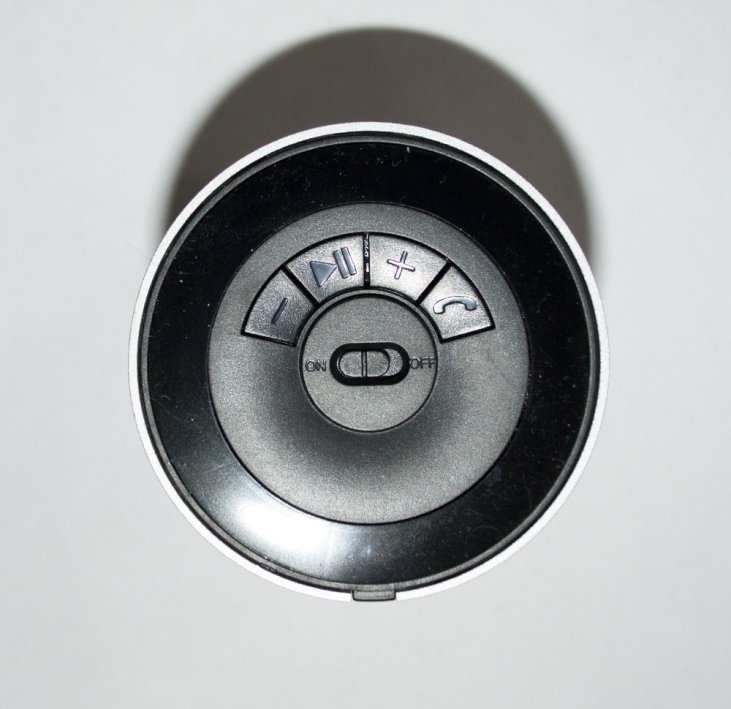 Hidden from view most of the time on the base is a physical slider switch for on / off as well as buttons for volume, track control and call answering. These buttons are surrounded by a black rubber ring allowing the MusiQi to sit securely on even the glossiest of flat surfaces.

Charging the speaker for the first time really didn’t take very long at all and once charged I set up the Bluetooth connection on my phone. That was as easy as it possibly could be; once the MusiQi is turned on it goes into pairing mode. With the speaker paired to my phone it also connected very quickly after being turned off and on again. Playing music through the speaker was relatively painless on my ears; although there was a definite lack of bass, there was no such lacking in pure volume for such a small device. As long as the tunes were not too heavy, then listening was fairly pleasant and hands-free calls were a lot clearer than simply using the loudspeaker on the phone.

I really liked the twisty display stand but that only worked on my phone without the case because of the brushed effect of the plastic wasn’t smooth enough for the micro-suction mat to work effectively. Something else that only worked when I wasn’t using the protective case was the Qi charger. This really surprised me as I currently use a Qi charger beside my bed so I don’t have to fiddle with cables in the dark and I’ve not had any similar issues with it. The phone case isn’t all that thick – around 2-3mm – and a combination of plastic and rubber, nothing that in my mind should stop the signal from the Qi charger.

Something else that threw me back was when using the MusiQi out and about the first time. I connected the Bluetooth and started playing a track and tried to top up my phone at the same time. It wouldn’t charge, even with the phone out of its protective case! It was only when I got home that I discovered that the charging function doesn’t work off the battery and I can only charge the phone with it connected to the USB socket. It was around this time that I also discovered that the Qi charger only powers the phone at the standard rate, regardless of whether or not you use a fast-charging socket. On a similar note, the speaker doesn’t receive power from the USB socket directly, only from the available charge in the battery. So if you unplug the USB cable with a full battery you can only use the speaker, and if you plug it in when the battery is empty you can only use the Qi charger – but only if you also remove your phone from its case first.

I liked that it charges quickly and that the pairing is extremely simple, and considering that there’s only one speaker in the unit you get fair quality and a lot of volume, albeit at the expense of any base at all.

The problem is that it’s about all I liked from a performance standpoint. The Qi charger was weak and didn’t support Fast-Charging, and the real surprise came when I discovered that it has to be plugged in to work at all, so no battery back-up here. Since the Qi charger needs to be connected all the time it would have made sense to use passthrough power for the speaker so that it didn’t rely on battery power when connected to a charging point, but alas this was another trick that was missed.

Overall I like the design. There is a blue ring LED around the circumference of the micro-suction mat that lights up to show that your phone is receiving power. The idea to go with aluminium for the body was a good one and I love the look and feel of the matt effect they have chosen.

There is a downside though to the design of the MusiQi. I get that ‘most people’ apparently want everything to be iPhone-esque (although I’m not sure I’ve met anyone who falls into this ‘most people’ category), and putting the buttons on the base is possibly something Apple would have done, but it’s a case of putting design before function. I like the idea of putting the physical on/off down there, but having to pick the speaker up every time you want to skip a track, change the volume, or answer a call remotely soon gets frustrating. With no AUX or SD card input either there’s much more miss than hit with the MusiQi.

The retail price for the speaker is $79 or £61, however currently the MusiQi Wireless Charging Speaker is available for $49 (£38) on the Fone Salesman website. For that you get a device that sounds fine and looks good both at a distance and close up, but: 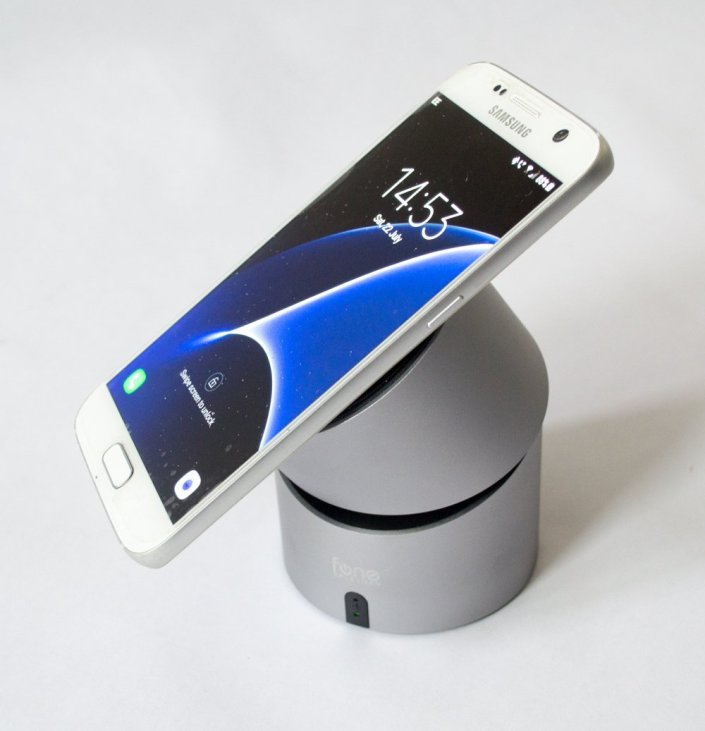 Should you buy the MusiQi Wireless Charging Speaker?

The MusiQi Wireless Charging Speaker tries to fill all the boxes, but unfortunately it only succeeds some of the time. There are too many cases where you only get one of the combinations working for it to be worth buying at $79. You get much better value and much better products by buying a QI charger and speaker separately. And so, I’m disappointed to say that I cannot recommend buying this at full price. That said, with the current price reduction, the MusiQi is more within the realm of the cost of three budget option separate devices and so the thought of owning one is not quite as distasteful…so long as you can put up with the downsides of ownership.

I would like to thank Fone Salesman for allowing us to review the MusiQi Wireless Charging Speaker.