It should come as no surprise that Sennheiser is a premium audio brand specialising in high-end and high cost acoustics. What might surprise you is that they also make gaming headsets. It certainly surprised me… I always thought that they were a bit too elite for us mortal gamers, especially those on a budget. Yet considering that today’s review item, the Sennheiser GSP 303 Need For Speed Payback Edition headset, comes bundled with that brand new racing title for just £89.99, you’re not really paying that much for the hardware portion of the pair. So it’s a cheap Sennheiser, but is that a bad thing or a really, REALLY good thing? That’s what we’re about to find out!

First, the specifications as listed on the Sennheiser website product page. 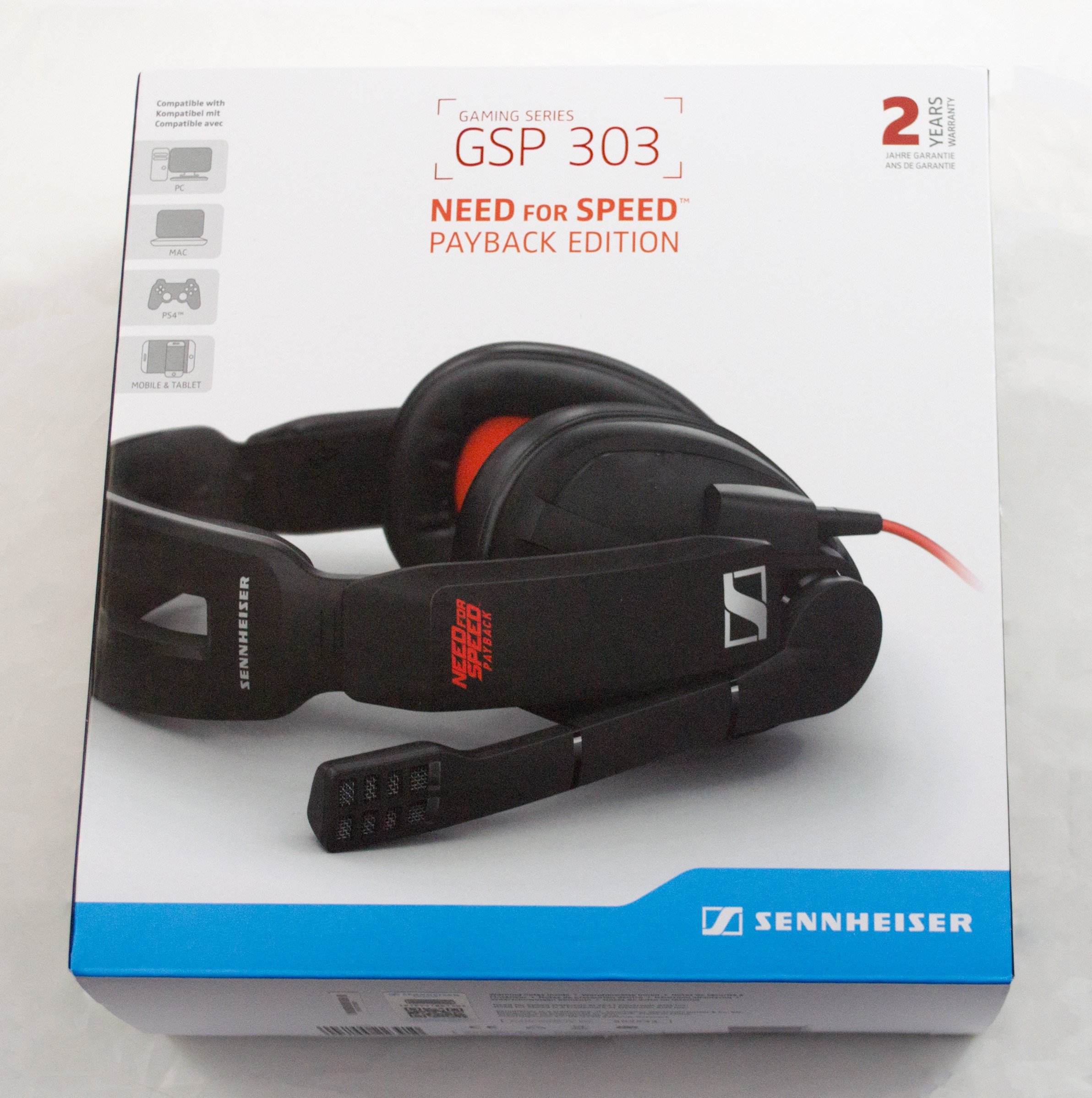 Starting at the front of the box, we have a side-on image of the headset along with the branding, and some fairly small logos indicating that the headset is suitable for all gaming formats but not a lot of information. 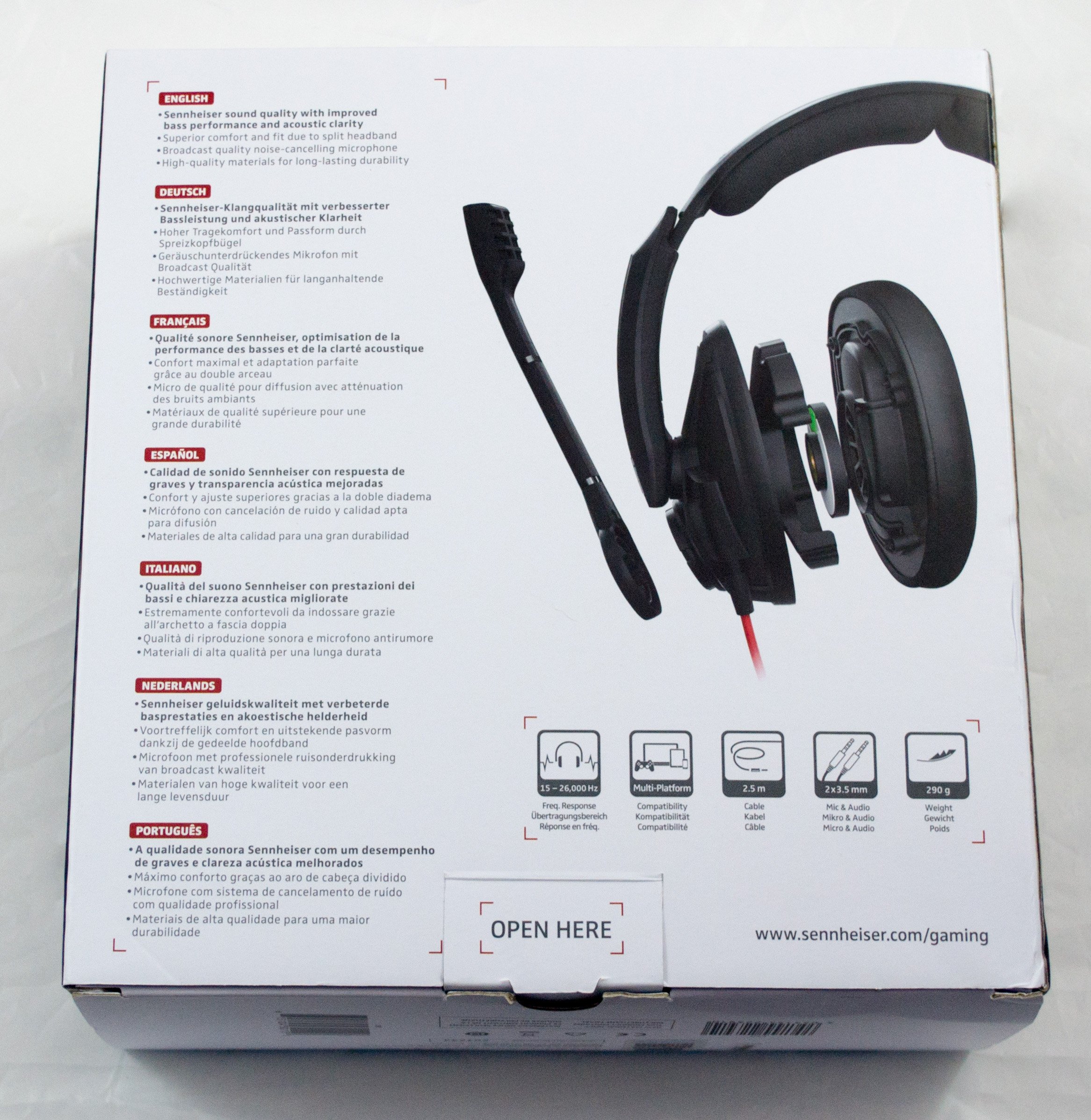 Around the back there’s a bit more information repeated in many European languages to highlight the main selling points as well as an exploded view of the earcup. 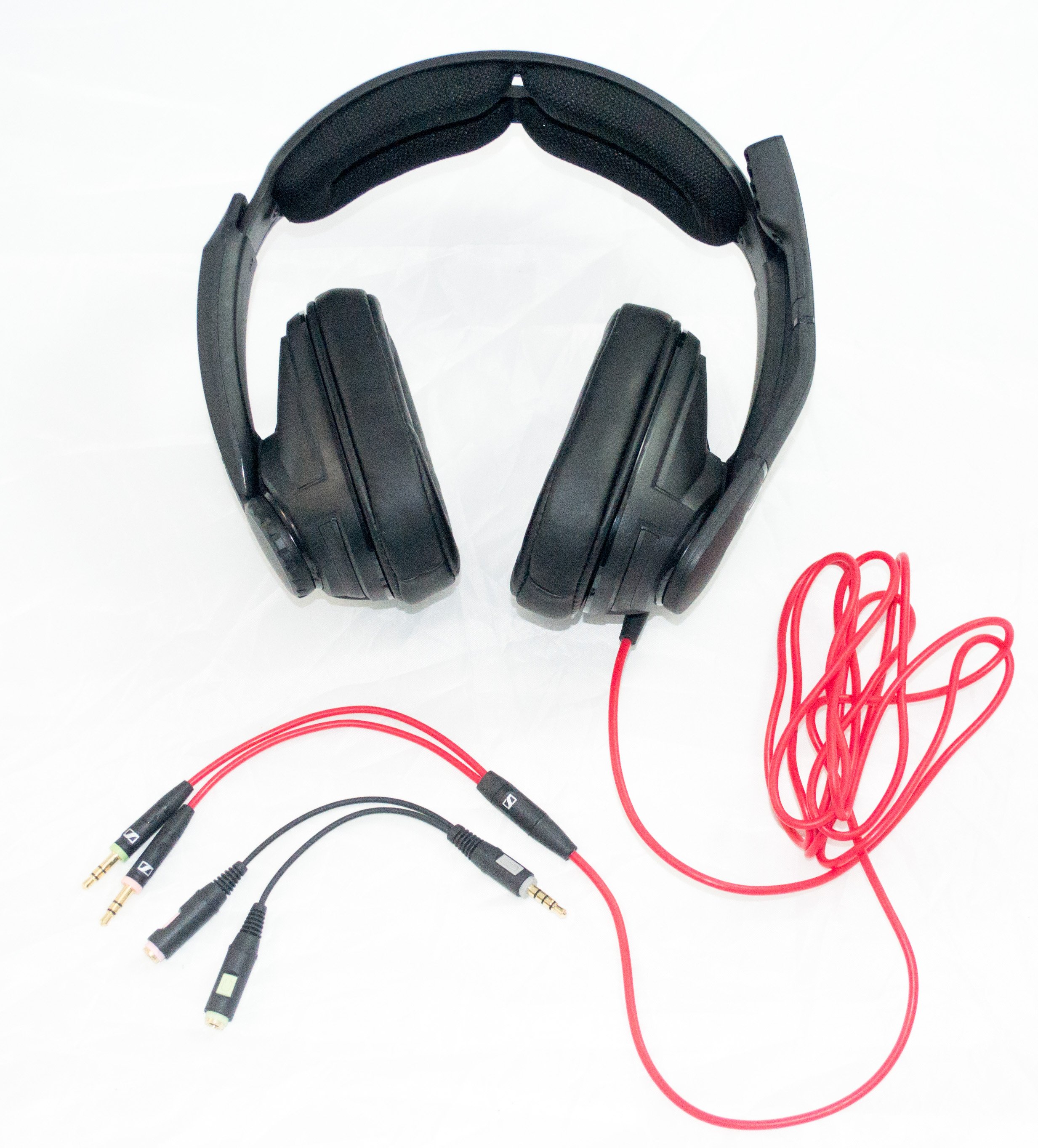 The contents of the box are really simple, no fluff or fuss, focusing on the headset and a splitter cable for mobile devices with gold-plated contacts and a short connecting cable. Well, there’s also a safety guide leaflet and the game code for your own copy of Need for Speed Payback but today we’re concentrating on the hardware. 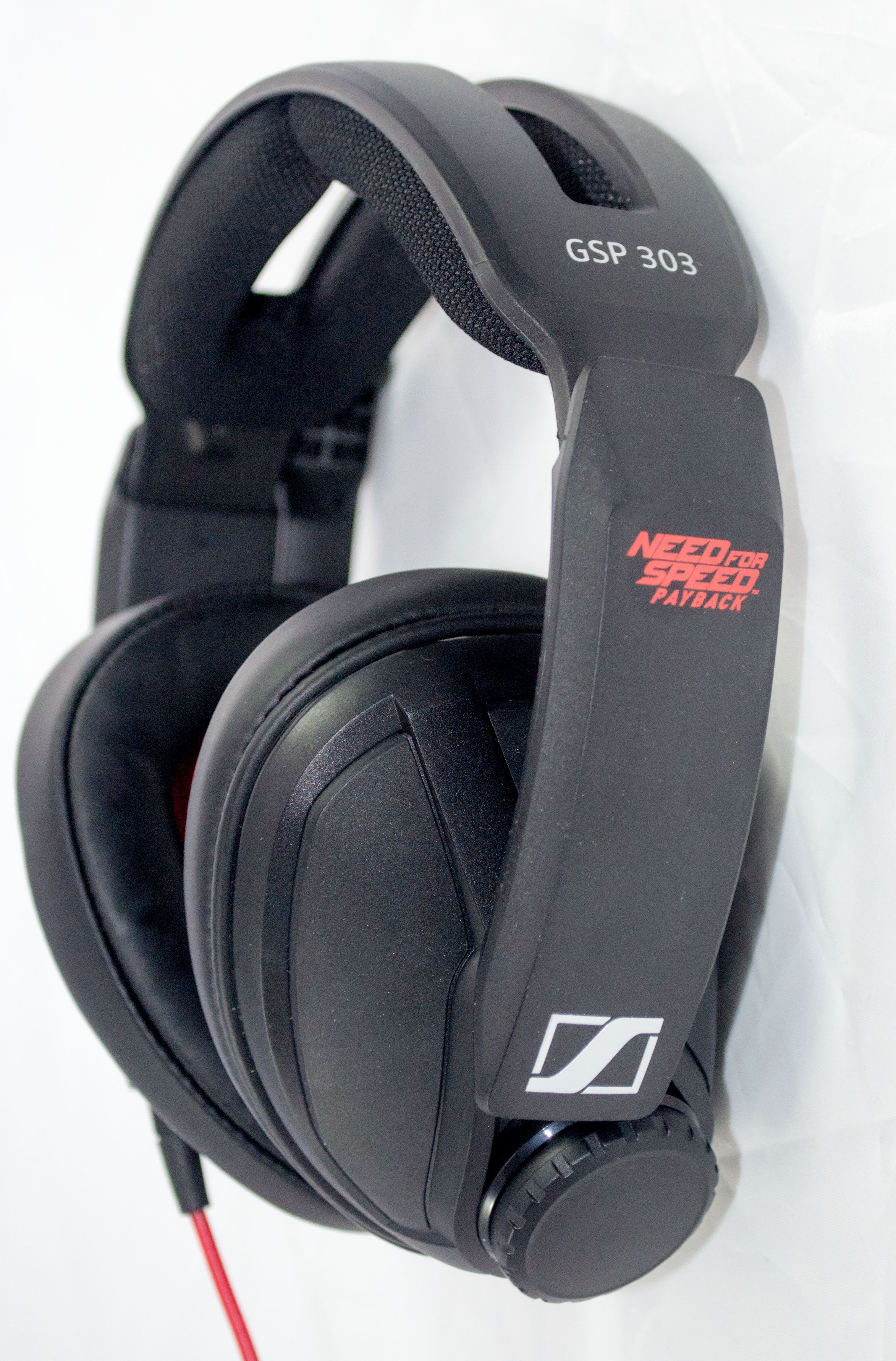 The headset presents itself with a split headband design which spreads the fairly substantial weight over a larger area to reduce the burn over time while also helping to reduce weight and is lined with some rather cheap sounding foam that crinkles when it’s squashed which is covered by fairly rough material. It’s clear that this is one area that savings have been made in terms of cost as well as weight. The right earcup has a dial for volume control as well as some clear branding to let everyone know what you’re playing as well as what you’re using to listen to the game. 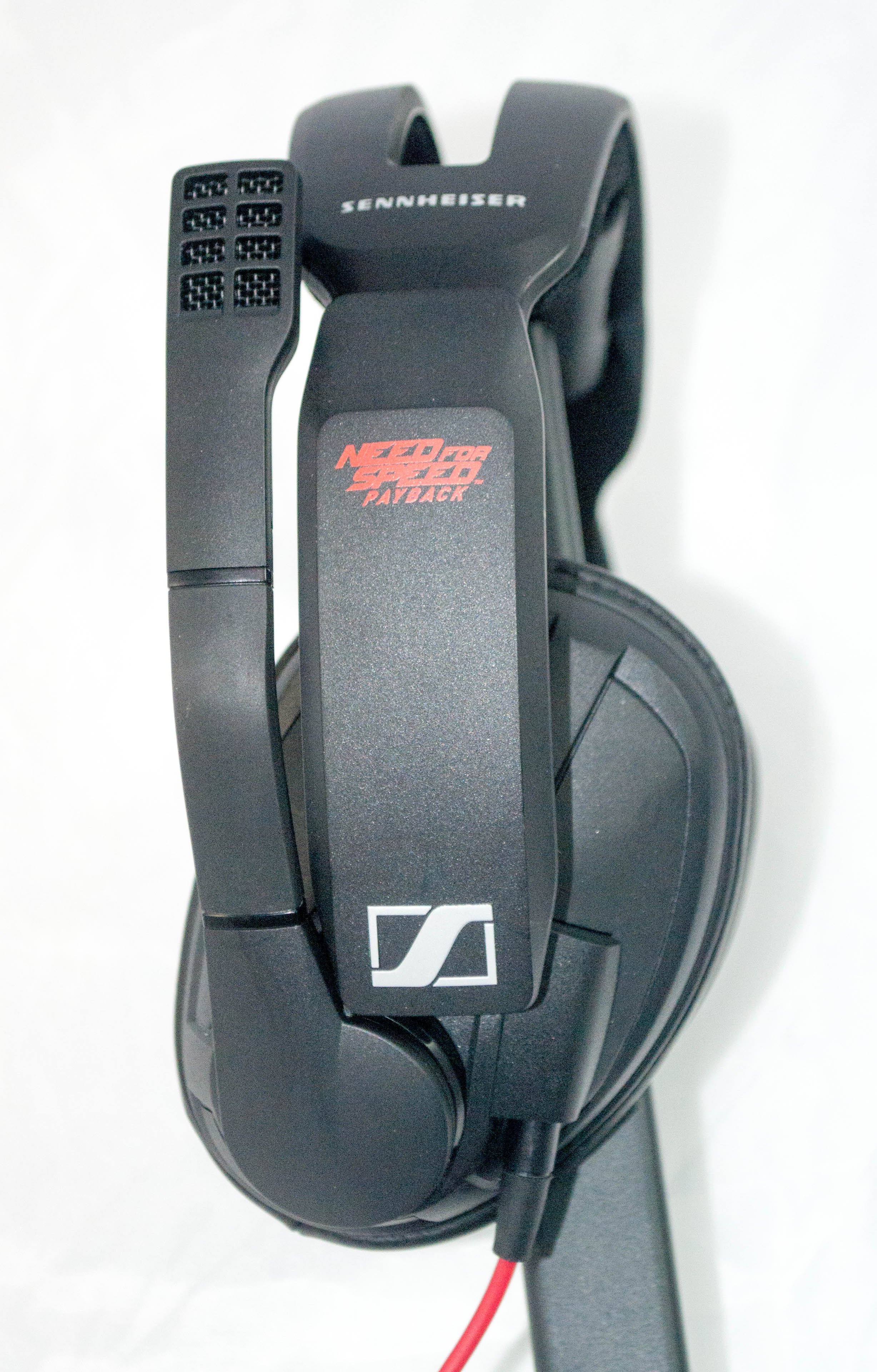 The Sennheiser GSP 303’s left earcup is a mic on a drop-down boom arm as well as being the connector for the audio cable which in contrast to the black headset is a shocking red. Sadly the cable is not braided which would have helped to protect it from stretching as well as roll-over damage and other chair or desk related calamities. Instead it is coated in a really sticky rubber that will infuriate anyone who hates to have any tangles in their cables but at least the connector on the end is gold plated, as we saw earlier in the contents image. Again we have some nice clear branding with the Sennheiser name as well as their logo and the NFS-P title. 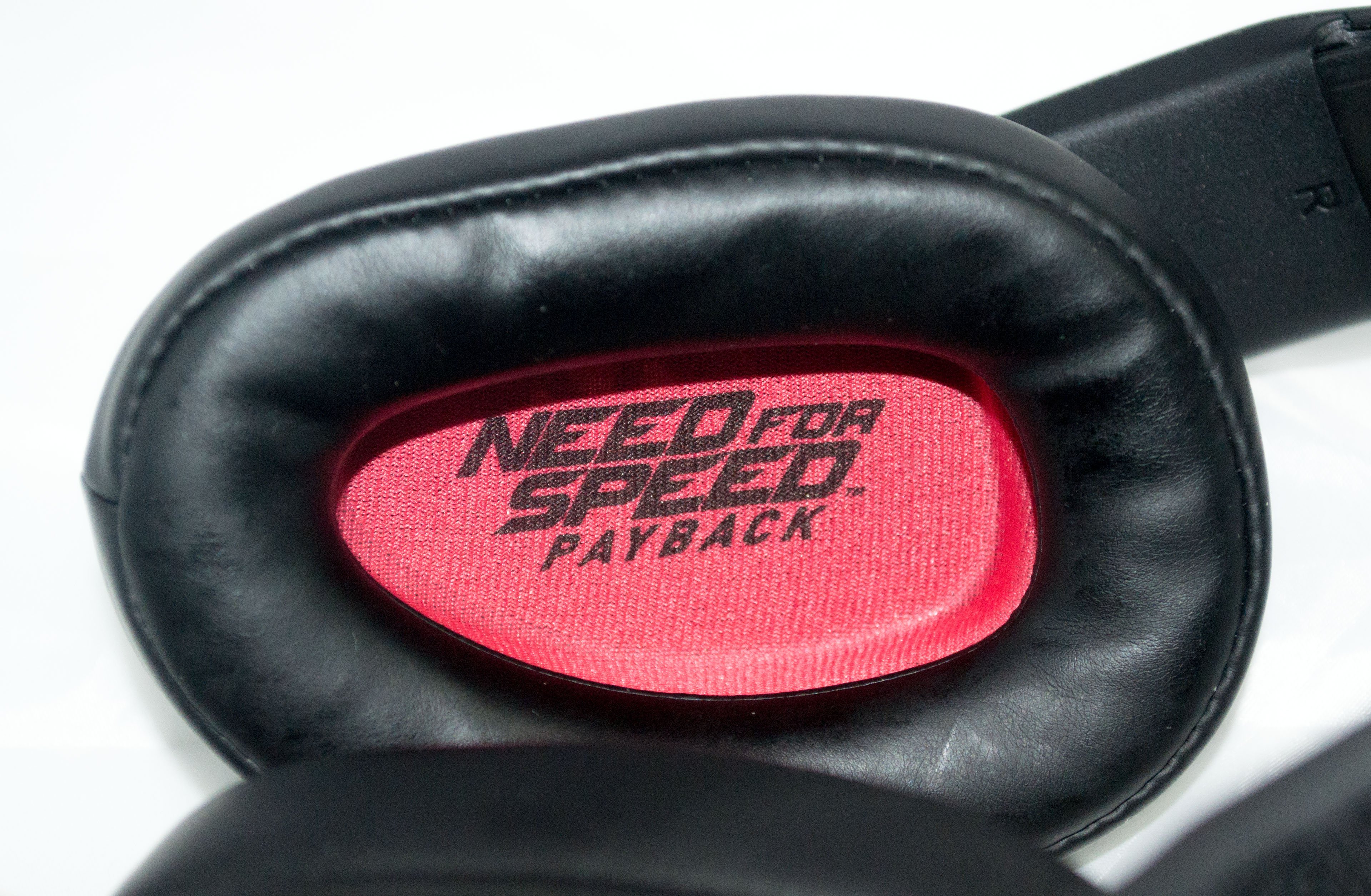 The earcup itself is where the magic happens and I’m happy to proclaim that there are no obvious cost savings at all here, if anything this feels the most premium part of the headset and as the part that’s guaranteed to sit against your skin (unless you’re incredible hairy) it makes sense to ensure that this is the most pleasant part of the user experience. The pleather used is so soft that it caresses your flesh and the foam used to cushion the earcup is undeniably the best I have ever experienced from a headset being so malleable that there is almost no resistance as it forms itself against your head. Inside is a contrasting red cloth with the Need for Speed Payback logo printed.

Using the headset for the past week or so has been a really enjoyable experience for what is essentially a £40 product if you take off the cost of the new release. As I mentioned, the earcups are definitely the high point, not just the feeling akin to resting your ear on the cheek of a newborn child, but the sound that comes from this headset rocks. Indeed, rock and metal work exceptionally well with the Sennheiser GSP 303 as a soundtrack to any driving game that you are playing as the headset seems to favour the heavy beat and bass that comes with the roaring exhaust, whistling turbos and crunching gear changes. In order to give it a fair test I also played some of my favourite RPGs including The Witcher 3, and listening to the speeches in the cut scenes as well as the general game audio was quite enjoyable.

It’s not all good news though, there was still a fair amount of ‘headband burn’ after just an hour or so of wearing which is something that almost all budget headsets suffer from. And then there’s that sticky cable which actively helps to tangle the cable and resist most efforts to release the knot.

All in all though I will remember this experience as being a favourable one due to the fantastic tuning of the audio that gives clear dialogue, rumbling explosions and a stunning musical experience whether you’re playing games, Spotify or a movie. Using the mic won’t cause you any problems either, being crystal clear for your audience or during a Skype chat.

The audio output is pretty much excellent for the price, and so is the comfort from the earcup which forms a gentle seal around your ear to exclude distractions from your environment. If I can get over the pain of the headband and the mental anguish of a tangled cable then I guess anyone can but for great audio savings had to be made. Music plays clearly with a fair amount of bass and clear mid tones as well as bright highs. Dialogue in games and video is easily distinguishable from any background noise and effects are handled well. Dialogue is also handled well by the mic, being clear and without any background noise whether gaming or using your headset on your mobile phone for calls.

The look of the headset is striking, especially if the inner earcup is visible with its contrasting red cloth, but I think Sennheiser really dropped the ball with the sticky cable. the foam choice also is a game of two halves… really soft and comfortable on the ears but fairly harsh on the headband.

Sennheiser seem to have done some black magic to be able to produce a headset that sounds this good, comes bundled with a AAA title and all for only £89.99. Yes, some of the cost savings are irritating, and perhaps a little unnecessary, and if you didn’t want the game or want it but when it’s a bit cheaper then you will rate the value of this headset differently, but for me they have priced this Need for Speed Edition of the GSP 300 series headset very favourably.

Final thoughts then to round off this review; Feels great while also being a bit uncomfortable, sounds amazing and it has an infuriating cable, all for a great price. Oh, and there’s a driving game included and it receives the Play3r Silver Award for its efforts as well as our Value Award. 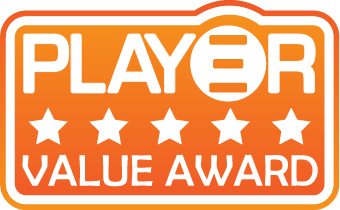 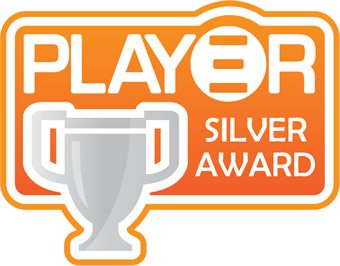 Thanks to Sennheiser for sending the GSP 303 Need For Speed Edition gaming headset in for review.

Cons:
– Mixed comfort where the headband irritates after an hour or so
– Sticky cable invites the Tangle Demon

Play3r - Jun 20, 2014 0
Hephaestus may be the god of fire but today's review focuses on a headset form Gamdias that incorporates heatsinks into the earcups to ensure you stay cool whilst melting your enemies.
Go to mobile version
%d bloggers like this: