So is the Bitfenix Shogun the modern day Minamoto no Yoritomo…or is it more Richard Chamberlain? Let’s find out! 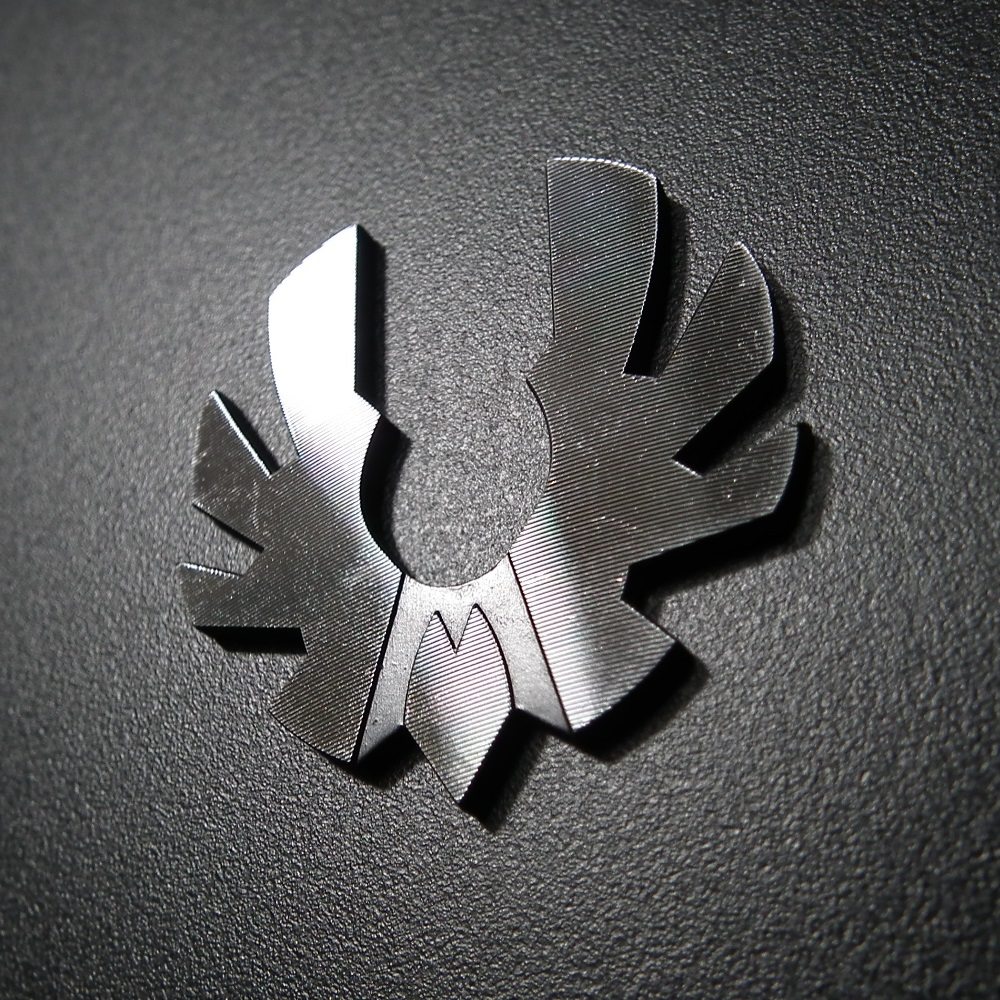 The BitFenix Shogun is advertised as delivering in both the looks and performance departments and from the outset, it certainly strikes an imposing stance. Standing well in excess of half a metre tall, this is one decent chunk of metal. To soften the edges of the sheer size of the Shogun, BitFenix has wrapped the top & bottom of the case with thick aluminium panels, which curve around and hug the entire unit. Sandwiched in between this curved aluminium, we have lightly tinted tempered glass occupying the front side panel position. 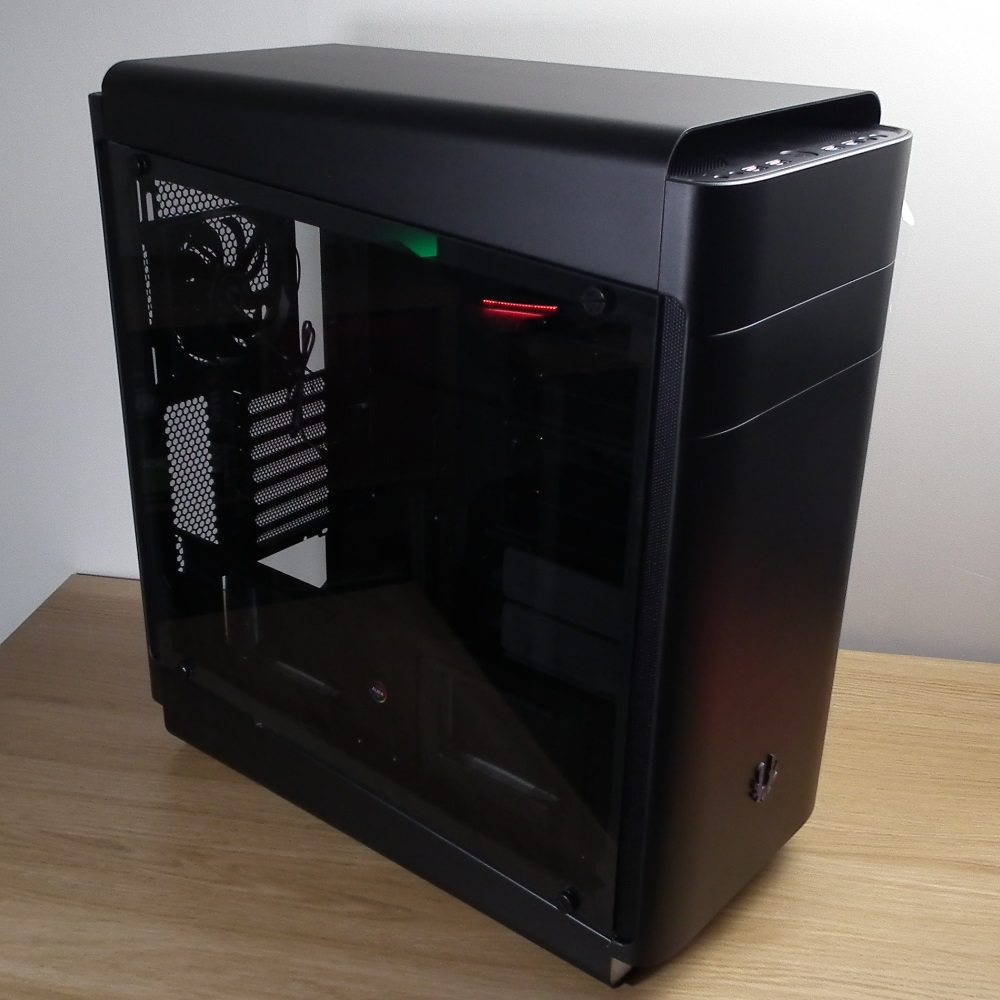 Front and centre we see a very minimalist front panel, with only the BitFenix logo and what appears to be a removable cover for a 5.25” drive bay disturbing the sleek surface. The suspected drive bay cover looks huge however and wraps around the side of the front panel…so it will be interesting to see what lies beneath when we remove this panel entirely.

At this angle, you can also see that the aluminium that wraps around the Shogun top & bottom, gives a clear view from front to back. 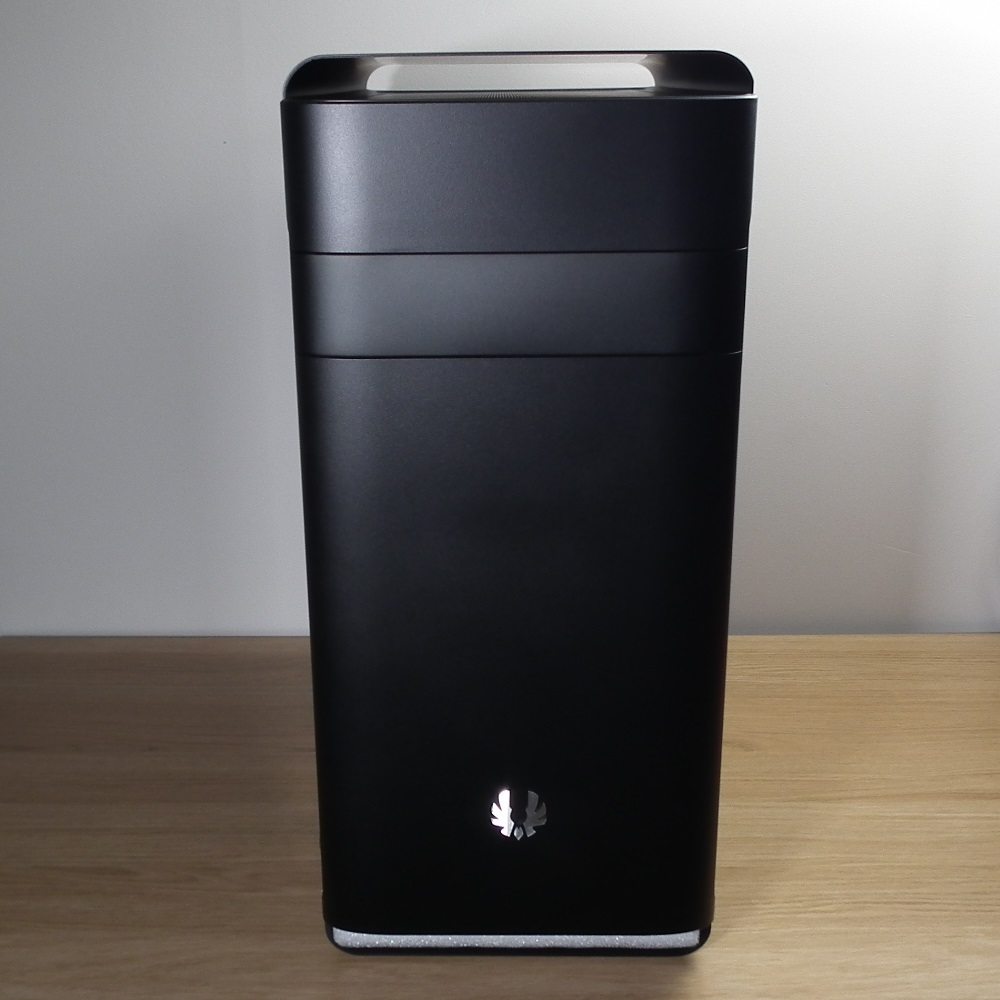 Peeking out from under the aluminium panel in the front I/O, which features all the usual suspects; headphone & microphone jacks, dual USB 2.0 ports, a large power button with HDD led above it, dual USB 3.0 ports, a reset button…and finally a LED lighting control button. 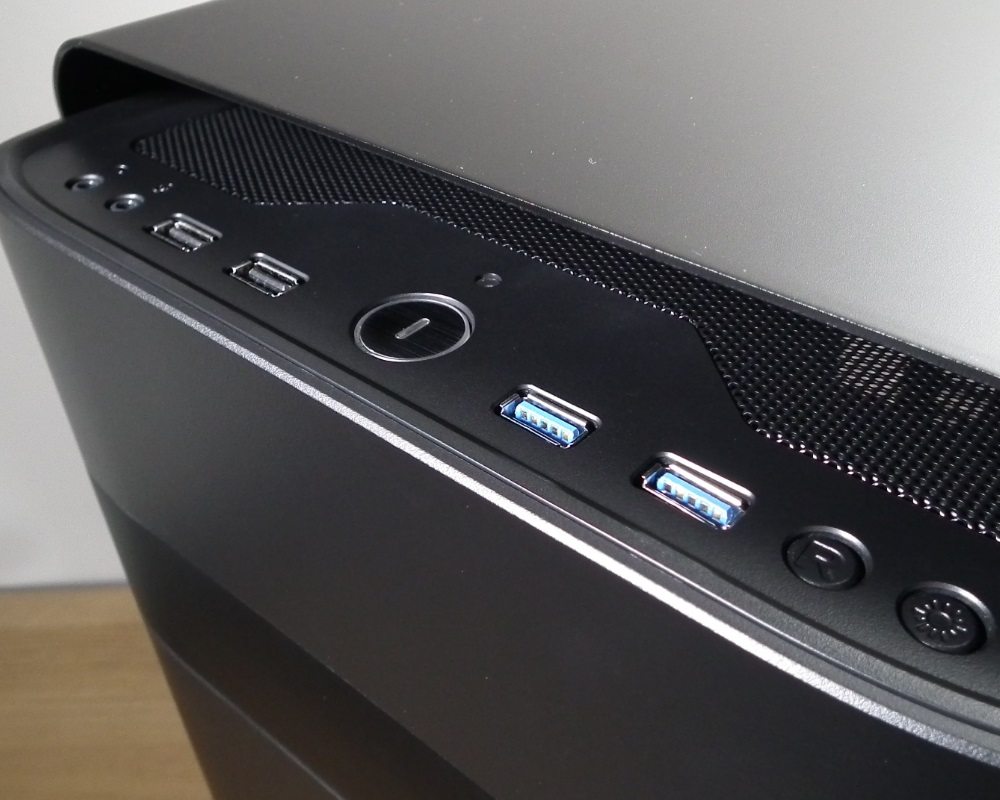 Moving around to the rear side panel, and we are again greeted with a nice large slab of tempered glass…but this one is fully tinted, so there is no view of the rear of the motherboard tray when it’s fitted. 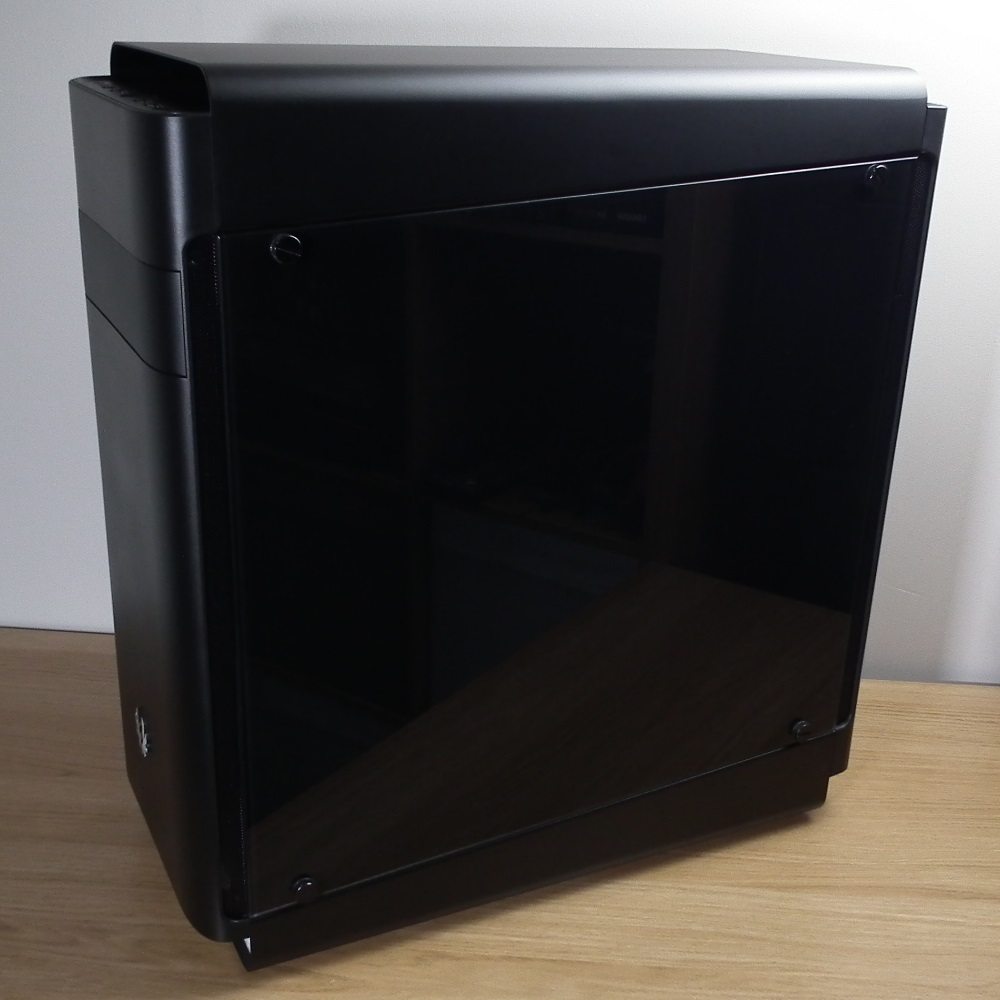 At the rear of the Shogun, we find the usual layout of I/O, rear fan, PCIe slots and PSU mount. All are present & correct, but that the whole of the rear is encased in a shroud which mirrors the look & dimensions of the front of the case. This gives the whole case a nice rounded look from front to back and is similar to what we saw in our previous review of the Mastercase Pro 6 earlier in the month. The BitFenix incarnation of this rear surround appears to be held on by screws however, and doesn’t seem to offer any access to route cables into the shroud to hide them…and is therefore only present for aesthetic purposes. 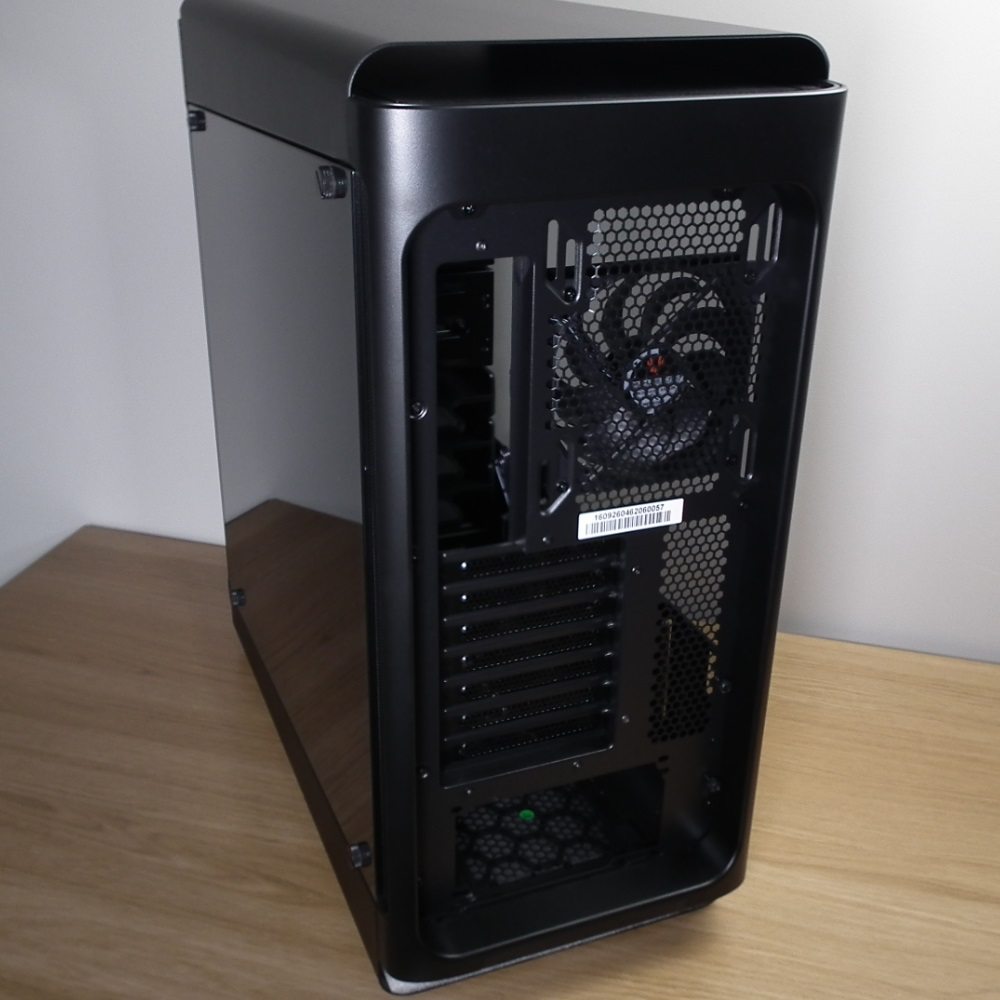 To complete the external examination of the BitFenix Shogun, we have the obligatory dust filter for the PSU, which is accessed from the foot of the rear of the case. 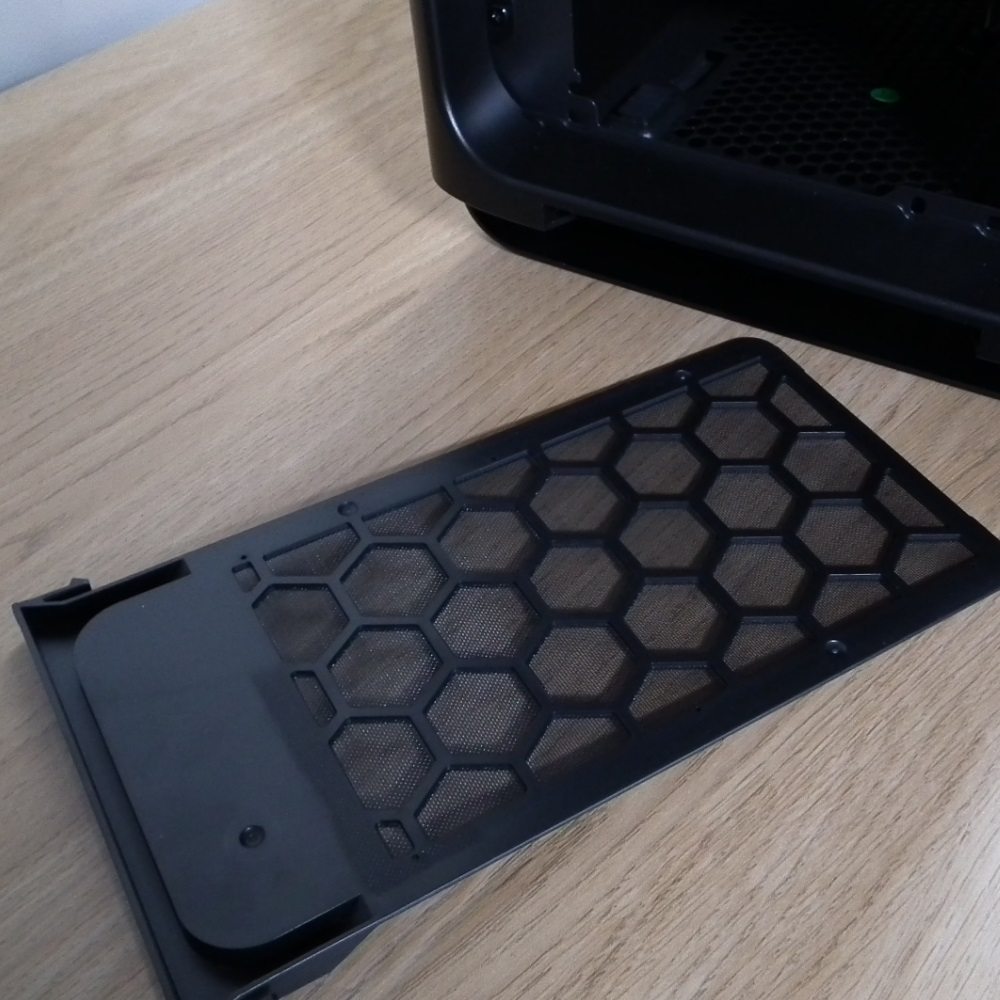 Removing the front panel took a fair bit of effort, which to be honest isn’t unusual these days. More & more cases seem to need a fairly hefty tug to detach panels, and the Shogun is no different. Once removed, we are greeted by two pre-installed 120mm intake fans mounted to brackets which will also accommodate 140mm fans. There is no 5.25” drive bay after all…which begs the question, why interrupt the front panel’s clean lines with what looked like a drive bay cover, if there isn’t one internally??? Strange! 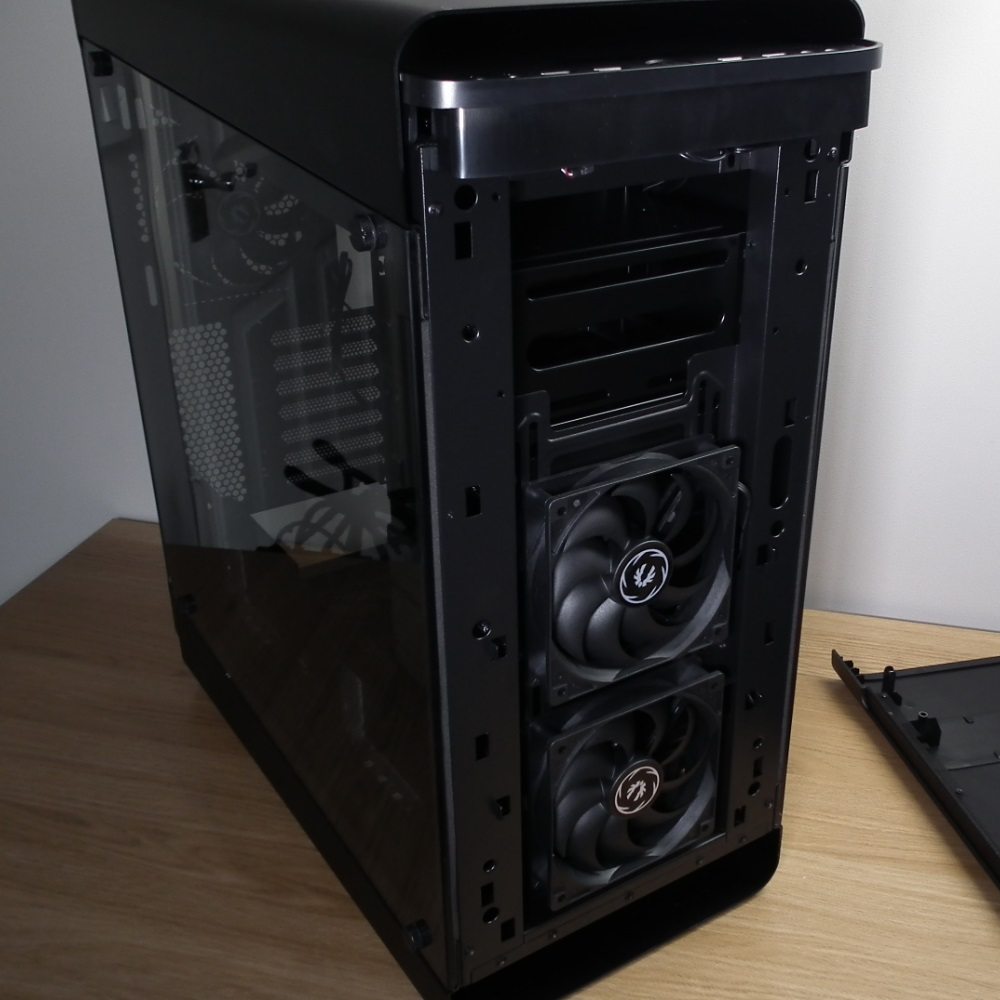 Removing the side panels is identical to every other case featuring tempered glass that we have seen to date, via flat thumbscrews through pre-drilled holes in the glass. Upon removing the front side panel, we get a better view of the myriad of customisation options inside the Shogun. The top right-hand corner is dominated by 2 separate cages for hard drives, whilst beneath those sit three GPU support brackets. To the left is a further pre-installed 120mm fan in exhaust orientation. Due to the angled nature of the case design, we are unable to see up into the roof easily, so we’ll await removing the roof panel before investigating further.

Perhaps the most striking element is at the foot of the internal chamber though, where we have the dividing partition, where you would likely find a PSU shroud. This piece of steel however is removable, and house two recessed SSD cages, each with LED illuminated panels. 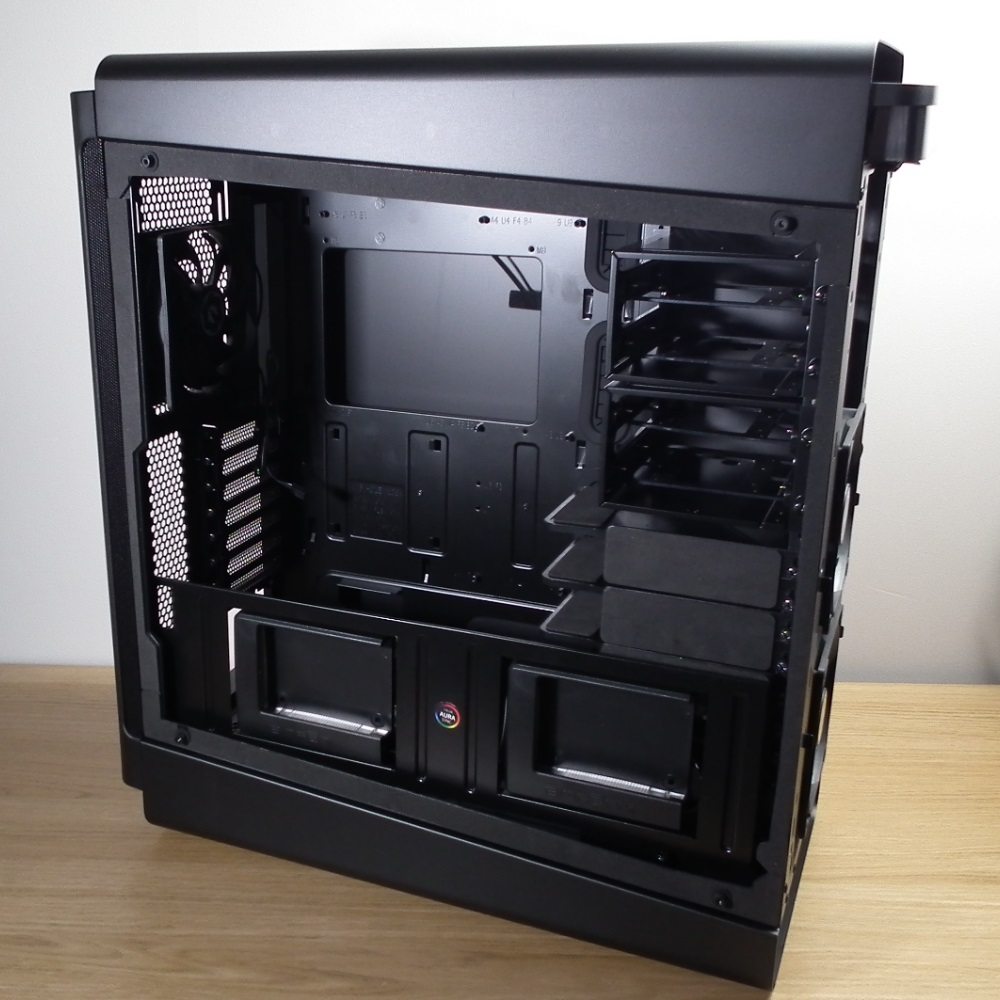 Whilst this partition will cover a certain amount of the PSU & associated cables from the front, it looks like it won’t be too forgiving from the top view, as you can see right into the basement of the case. 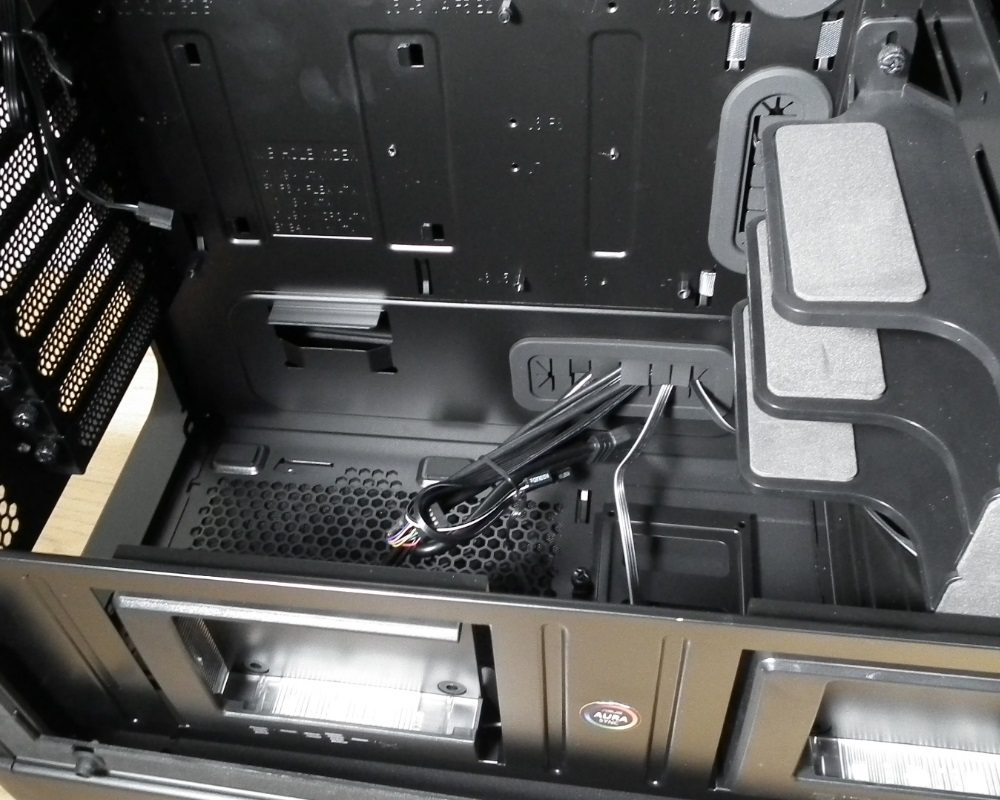 After removing the fully tinted rear glass panel, we get a look at the back of the motherboard tray and the cable management setup. In addition to the four 3.5” drive cages we could see from the front, we now also find a further two under the GPU brackets, which were shielded by the LED SSD panel. All loose cables are held nicely in place with pre-installed Velcro straps, running down the line of cable access points fitted with rubber grommets. Above the CPU access panel we have led controller, and below there are a further two SSD cages held in place with thumb screws. 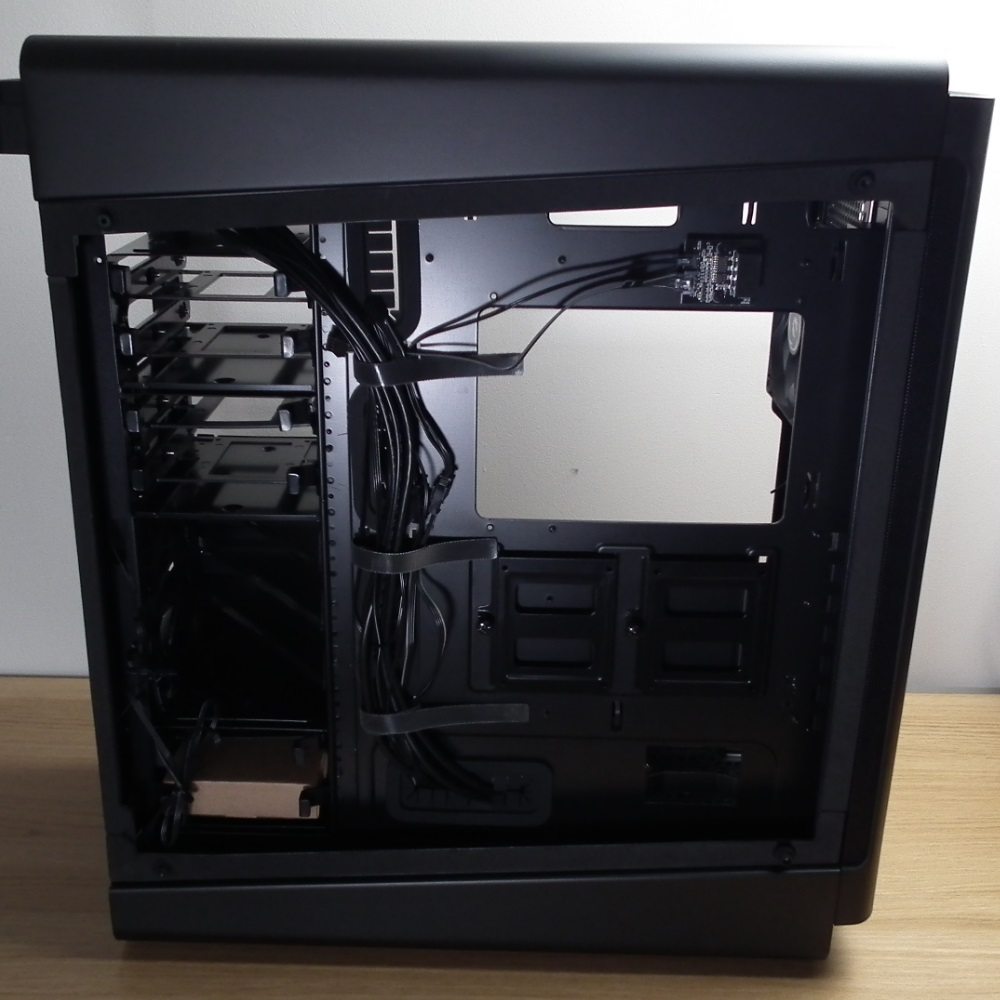 Removing the roof panel had me stumped at first until I realised that the whole top portion comes away in its entirety…including the lugs that the tempered glass panel attached to. Once off we get to see the roof mounted dust filter for the first time, as it was obscured by the curved aluminium shroud when fitted. 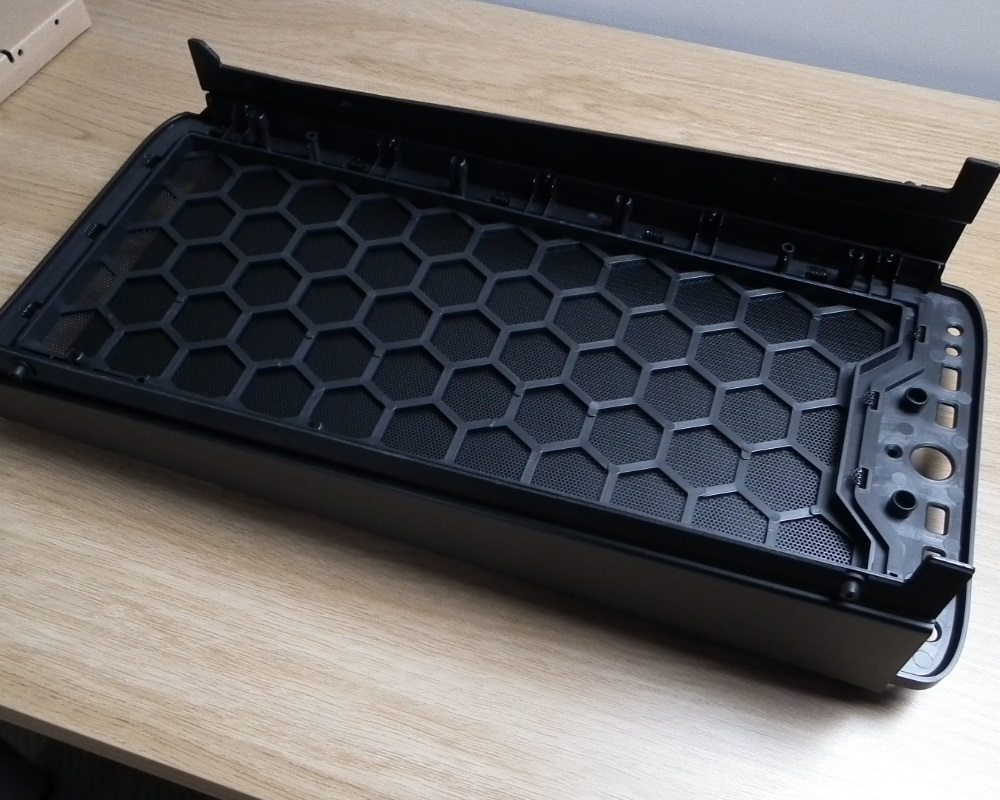 With the roof panel removed, the full extent of the roof mounted cooling options are revealed, with sufficient space to hold two 140mm or three 120mm fans. 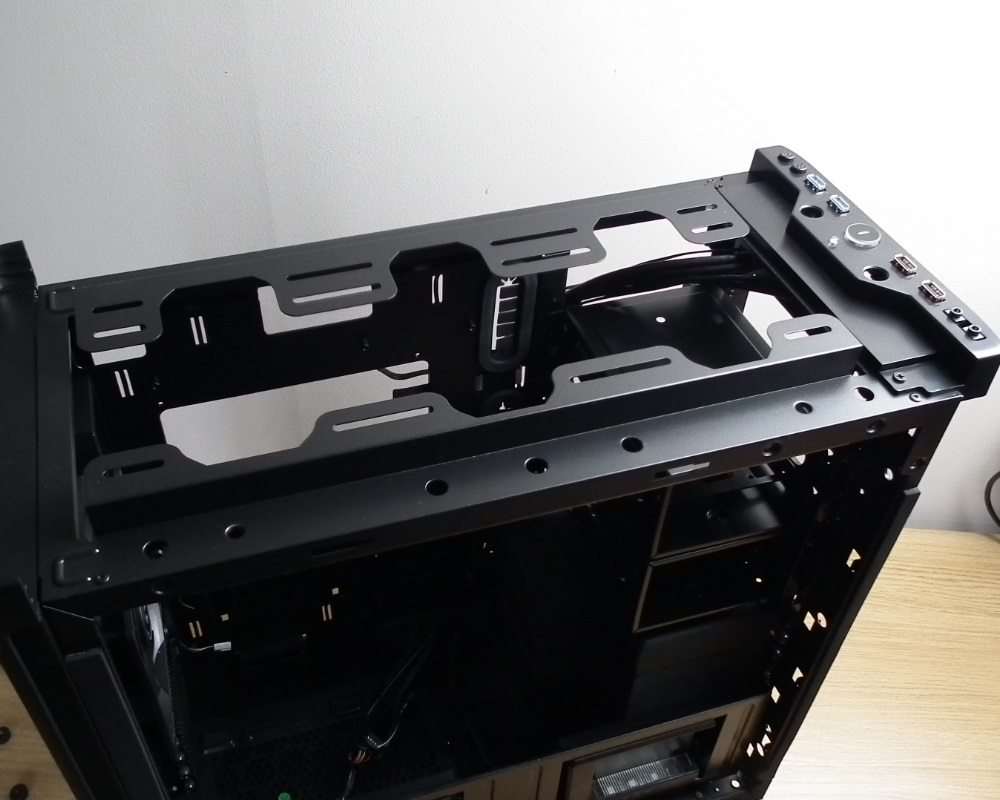 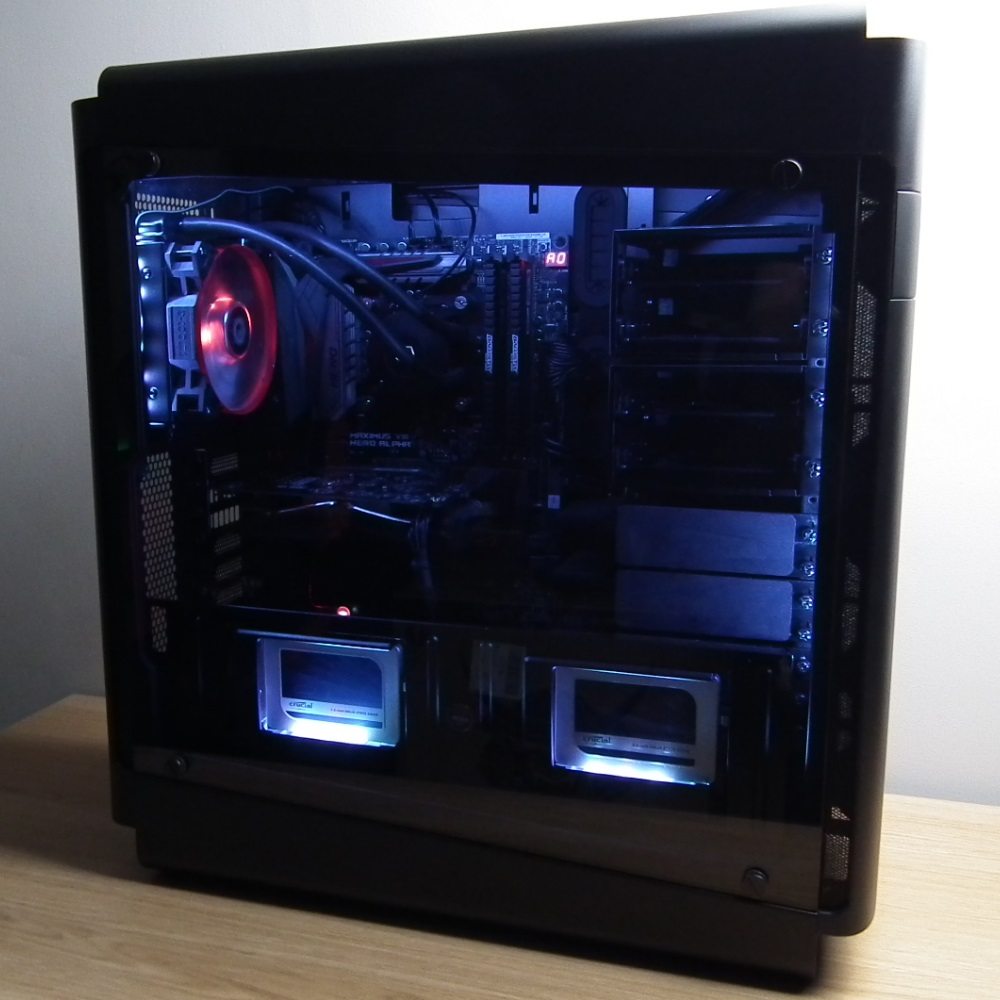 With a system built into the BitFenix Shogun, there is no denying that it looks good. BitFenix kindly bundled in some of their Alchemy 2.0 RGB LED strips to accompany the case, and they integrate seamlessly via the help of the rear mounted controller, to ensure that all LED colours are kept in sync. 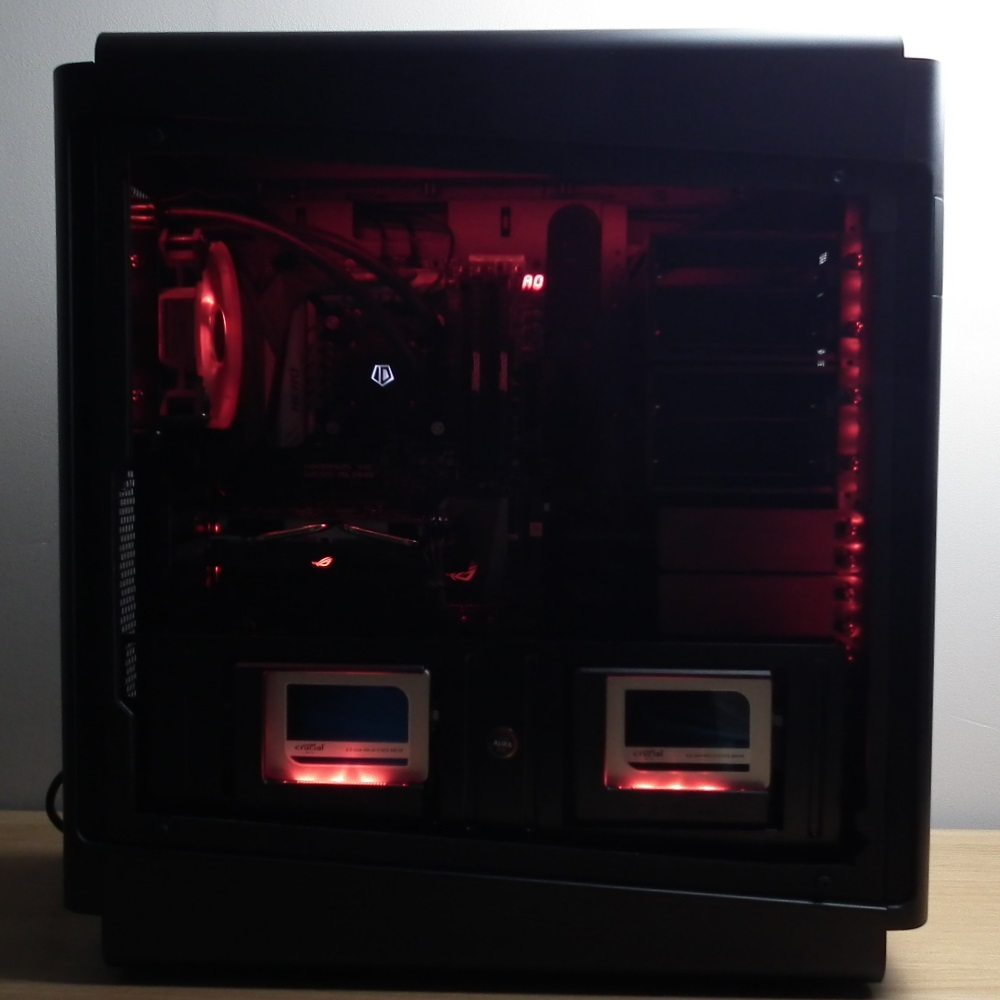 There was a good deal of space within the main chamber to work with, even with all of the drive cages and GPU supports left in place. Around the back of the motherboard tray, cable management was a breeze as there is a good amount of clearance when you fit the tempered glass panel, and the pre-installed cable ties kept everything neatly in place. 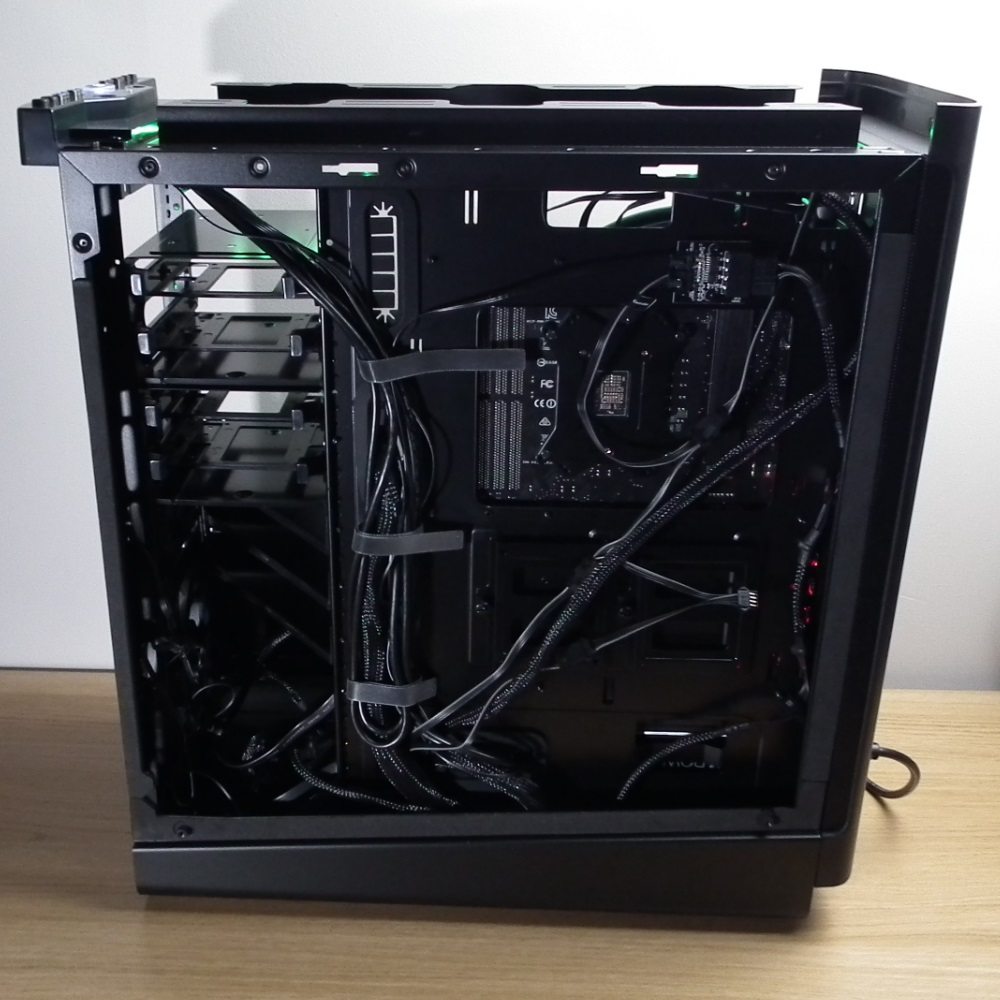 However, that isn’t the full story with regards cable management! As mentioned before, whilst the partition that holds the RGB SSD feature shields some of the PSU basement, as it’s open to the top, we could see straight down into that area. With a PSU mounted, my fear is realised…all cables are clearly visible, and the extra LED lighting that makes the system look so good, makes the problem worse! I even removed the bottom HDD cages to allow a little more room for the cables, but there was still little that could be done. 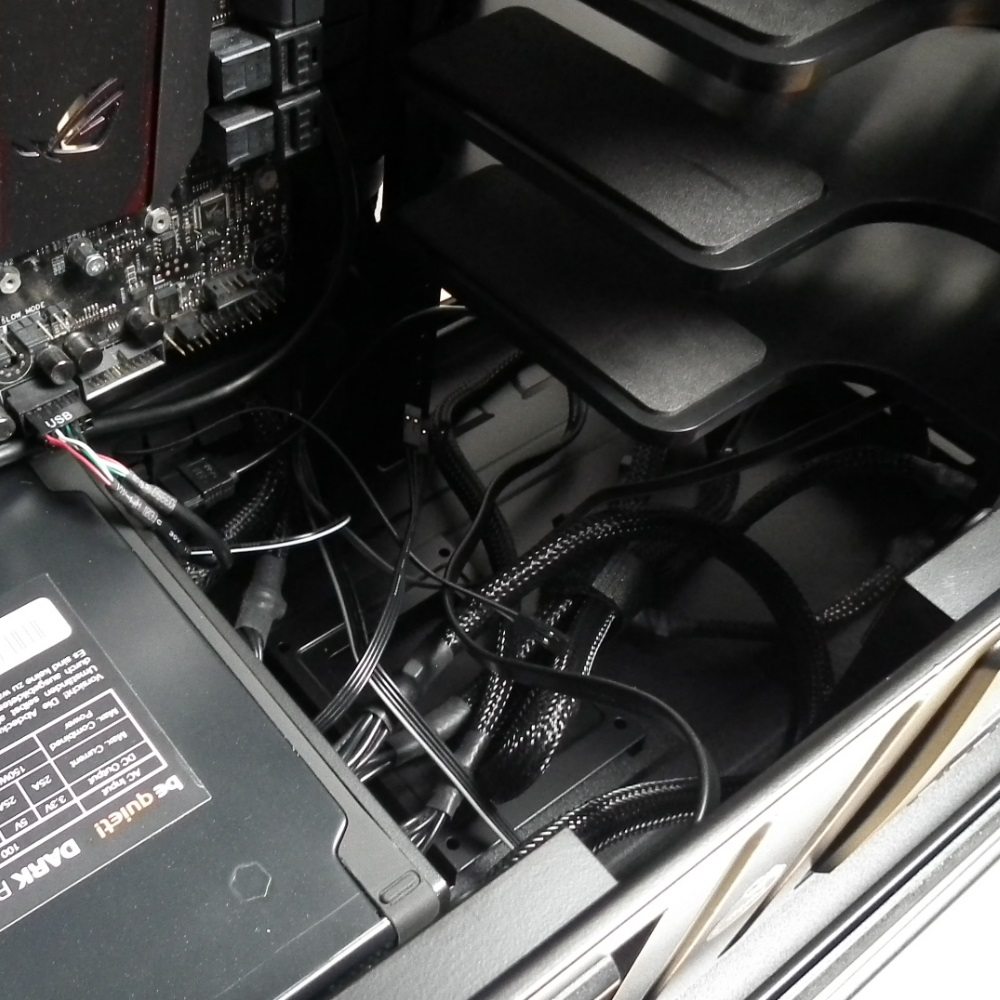 I have been looking forward to building into the BitFenix Shogun ever since it arrived. Its specifications list ticks all the boxes, from tempered glass & aluminium panels to modular flexibility and RGB features. It’s product video is quite frankly bonkers, but this only added to my anticipation. The Shogun is the new flagship case for BitFenix and as such carries a price tag of £144.95 in the UK at the time of writing.

Whilst testing out the Shogun, I was constantly comparing it to the Cooler Master MasterCase Pro 6 that I reviewed recently. It’s of a very similar size, boasts many of the same features, and is almost identical in price. So…how does the BitFenix fair in my ratings?

The Shogun is a big unit, and as such, there is plenty of space when building inside the chamber. The materials used are of a very high quality, and the aluminium is of a decent thickness. Combine this with dual tempered glass panels though, and with a full system inside, this is one seriously heavy bit of kit…you won’t be taking it to LAN’s anytime soon!

Cable management at the rear is perfectly adequate, but without a proper PSU shroud, there’s no getting away from the fact that the cables will be visible at the base of the case.

The overwhelming feeling I got from the build is that it just wasn’t as enjoyable as it could have been. Don’t get me wrong, there are a ton of options to play with, but it just wasn’t as polished as the MasterCase Pro 6. Some of the thumbscrews are tricky to reach, and the Chroma SSD panel is a major pain…but more of that shortly.

When up & running, however, the system was very quiet and provided good airflow overall. The inclusion of an E-ATX extender is a nice touch, and means that the Shogun will accommodate any size consumer motherboard.

There is a lot to like about the Shogun. The curved aluminium that wraps around top & bottom certainly gives it a unique and striking stance. The dual tempered glass side panels are gorgeous and just scream quality. The angular nature of the panels will divide opinion I believe. I would have preferred them to be square, but at the same time, they didn’t overly offend me. So, all good then? Well…no!

Why the clean lines of the front panel have been disturbed with what looks like a 5.25” drive bay cover (although it actually isn’t) is puzzling. I see no reason for it at all! One continuous, uninterrupted, clean front panel would have looked even better.

I’m also not a fan of custom Chroma SSD panel. It does half a job of hiding the PSU & associated cables and is really fiddly to remove & replace. I can see what BitFenix were trying to do, but it’s a very clunky execution of the idea, and quite frankly I would have preferred a plain PSU shroud. The lighting effect it contributes to show off your SSD is that negligible, it doesn’t warrant the negatives in my opinion.

As mentioned before, at the time of the writing the BitFenix Shogun is £144.95 in the UK, and to be honest I do think that is fairly good value for money. Premium materials have been used in its construction, and whilst the execution of the modular system may not be the best we have seen, it certainly offers more flexibility and features than a lot of its competition.

For the price however, I would have liked to see 140mm fans included. It’s a minor gripe, but the extra cost of including these of the 120mm fans would have been tiny for BitFenix.

The BitFenix Shogun is a good case, and as such gets the Play3r Silver award. That’s the problem though…it could have been an awesome one. Small issues like the faux drive bay cover on the front panel, lack of PSU shielding and the infuriating SSD panel somewhat tainted my experience this time.

People’s opinions on cases are very personal when it comes aesthetics & ease of use, but for me, the Shogun is beaten into second place by the Cooler Master MasterCase Pro 6.

Finally, it does get an extra point for its product showcase video…which is madder than a box of frogs! If Carlsberg did PC case promotional videos…enjoy! 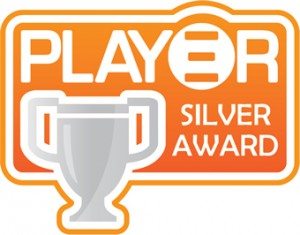 Dave McMahon - Jun 12, 2017 1
NZXT have released a new colour combination of its hugely popular S340 case… but is it still one of the best cases on the market for the money?
Go to mobile version
%d bloggers like this: