So when I was asked if I fancied reviewing a new case, I thought to myself why not I really like Midi Size tower cases they fit in quite well with nearly any and all spaces especially for me. When I was told that it would be the Panzer Evo from Cougar I thought hey this will be awesome and oh boy was I right but it’s a behemoth of a case to say the least!

So I welcome you to the Cougar Panzer Evo Case review as Cougar label this case on their site “The Crystalline Titan” and that’s certainly not wrong! So let gets to it and review this awesome and very smart case, oh cripes all the tempered glass makes it so heavy! 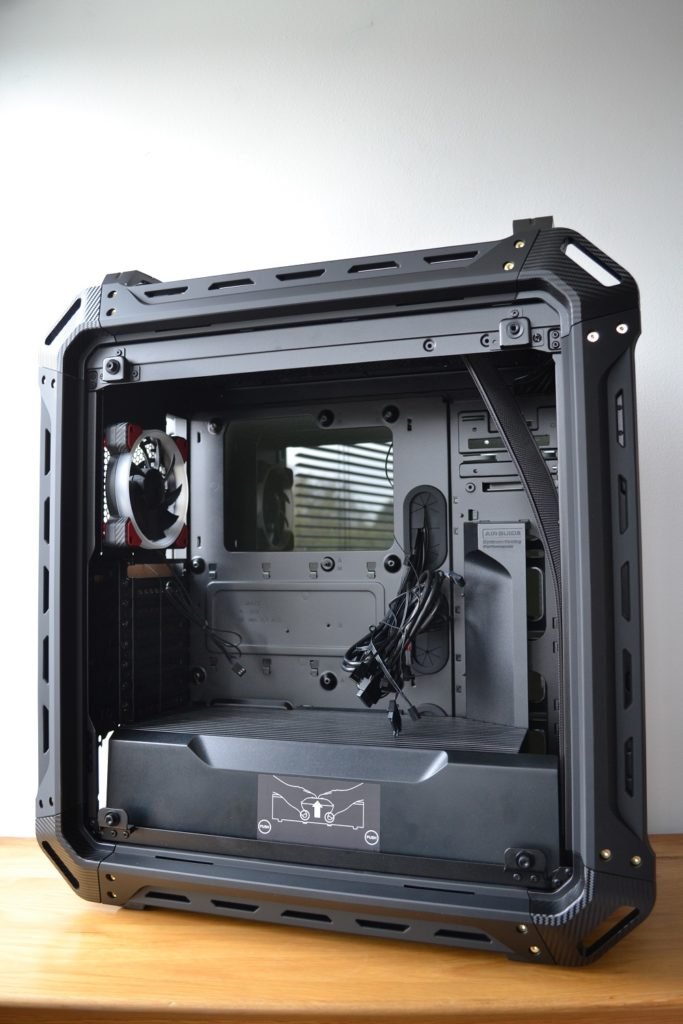 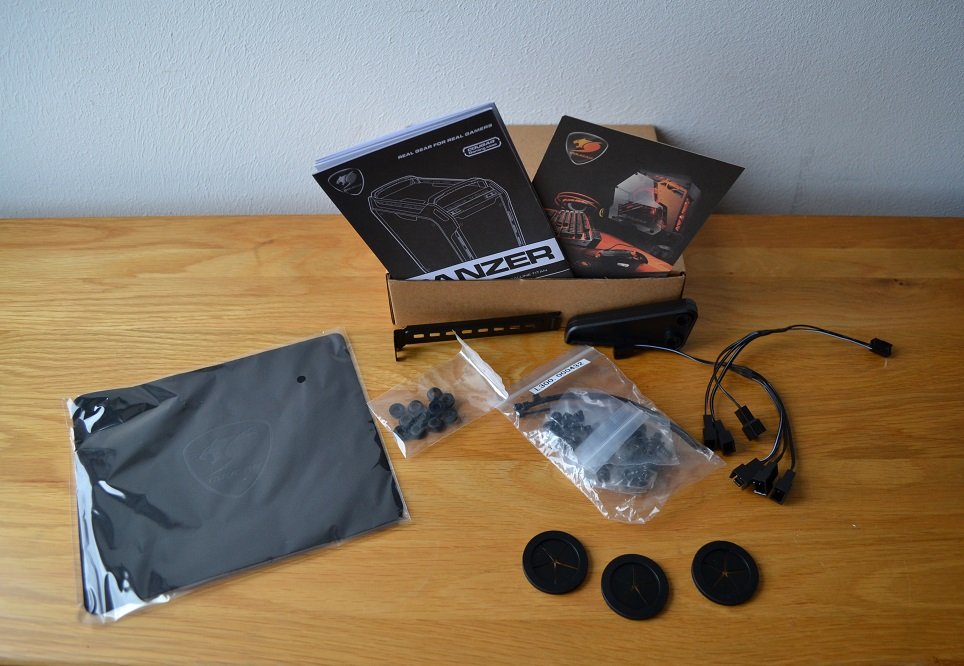 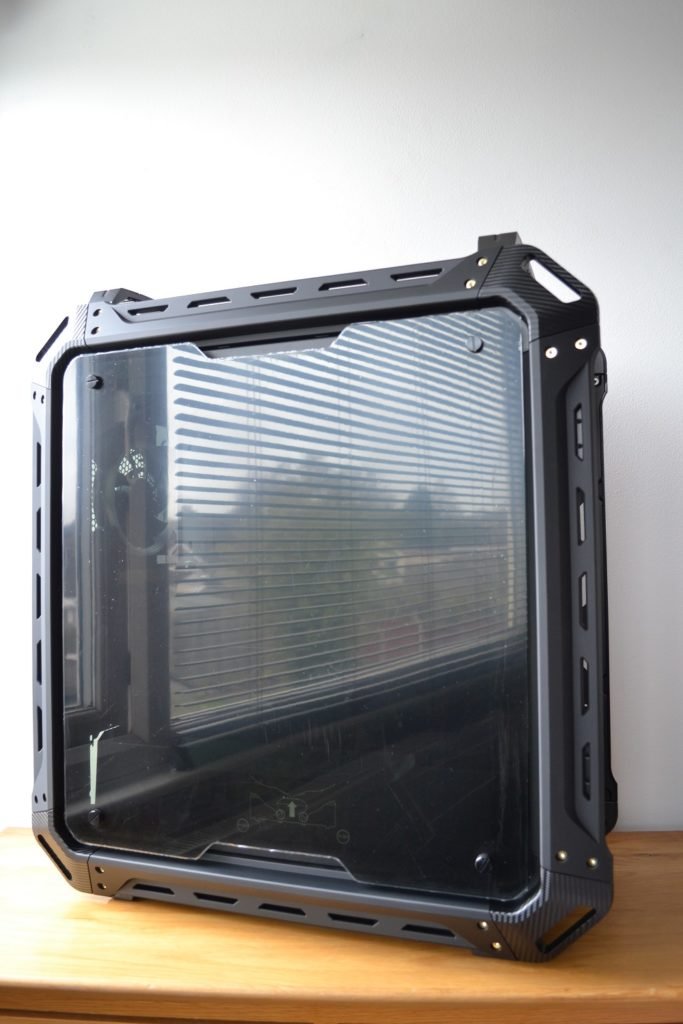 So after getting this big and very fancy looking case out of the huge box it’s time to see what bits and pieces are included inside, so much foam packaging is included for good reason as there are 4 tempered glass panels on this case. The top, front and sides have panels but it’s nice to see that these panels aren’t just plain squares as Cougar has opted to add some handy cutout sections that make removing the sides easier and also allows better airflow on the top of the case. It’s also really nice to see that you get 4 led ring fans, yes I said 4 included in the box and even better they are already fitted! So that’s one less thing to worry about getting sorted when you are getting to build time and also quite pleasant to see as most cases usually come along with 1 or 2 if you are lucky. Anyhow after opening up the massive box and getting rid of the foam packaging what greets the eye but a rather swanky matte finished chassis with shiny tempered glass which makes for really a nice double whammy aesthetic combination. 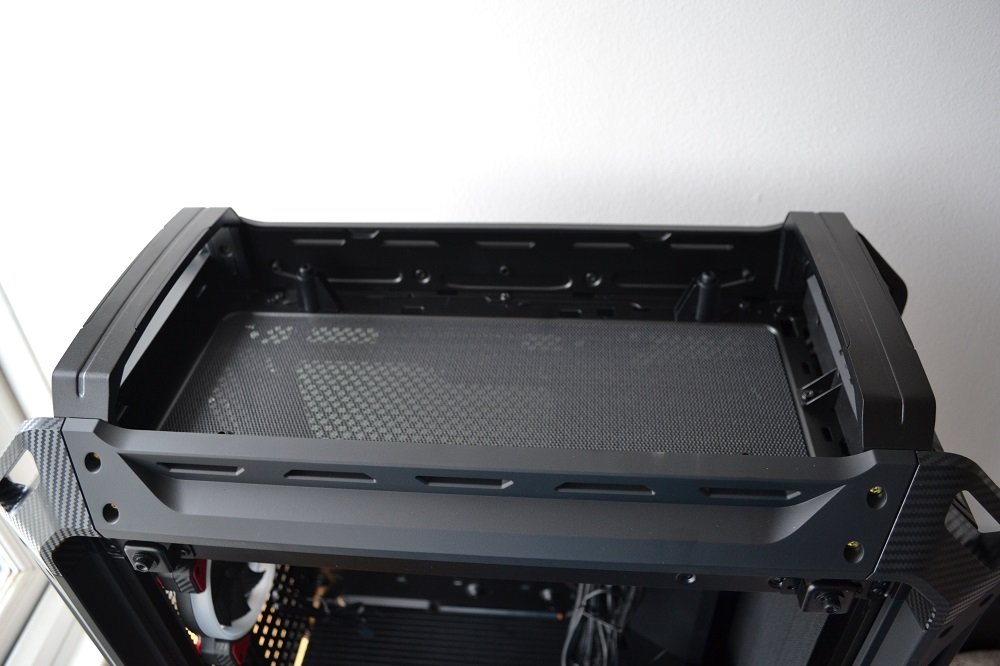 One part of the exterior I really like is the carbon fibre patterned corner sections that break up the matte black chassis frame, which I find makes the case feel just that little bit more premium and fancy. Of course, how can I not mention the mass of tempered glass panels that make this case just that little bit heavier but as with most cases once it’s in place you don’t really tend to move your PC about too much so it’s somewhat bearable. I was quite impressed once I’d gotten the panels off the case to see 3 pre-installed fans in the front, where there is also support for a decent radiator up to 360 mm as well as decent magnetic filter attached to the inner side of the case. Next came the top panel which reveals yet another space for up to 3 120 mm fans, same as in the front but none are pre-fitted up top, or up to a 360 mm radiator and again the top area also has a magnetic filter on the outer edge of the case between the fans and case. 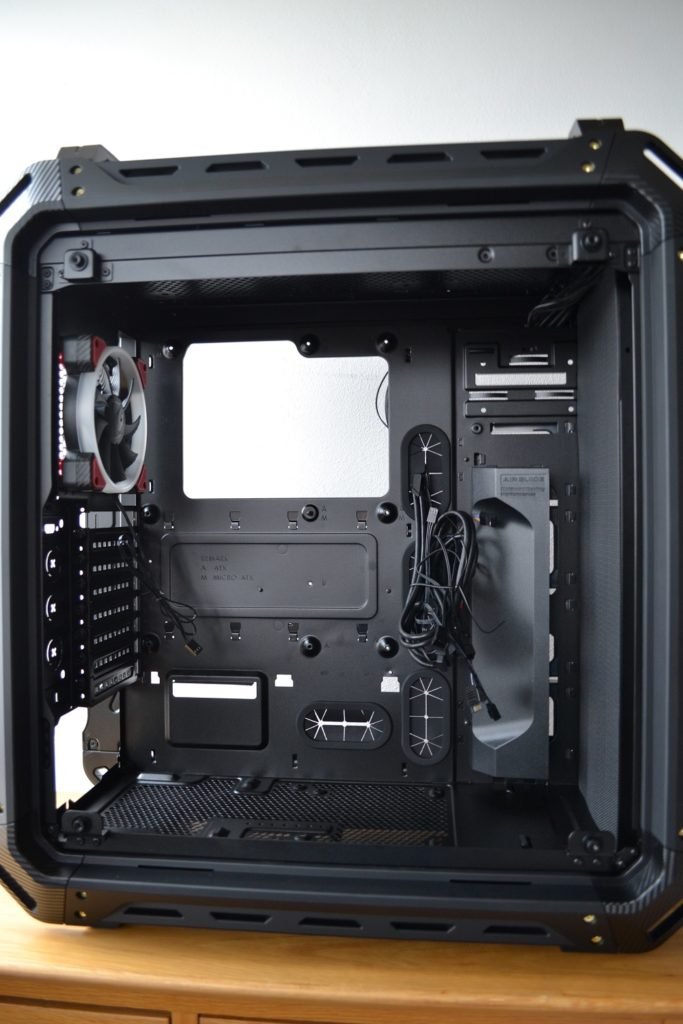 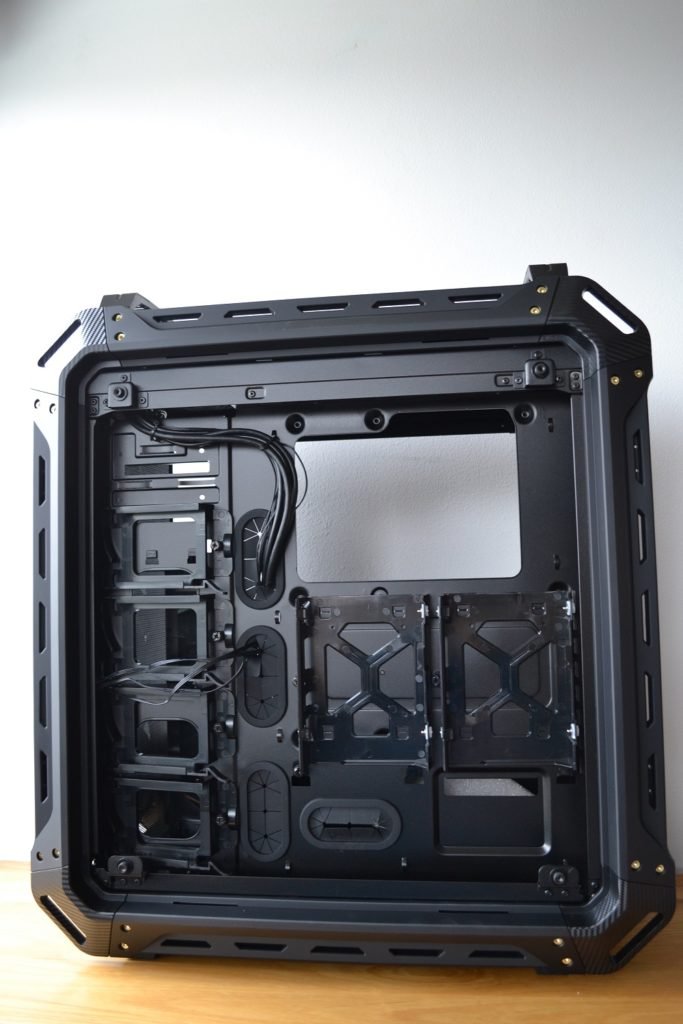 An awesome feature of this case is the fact you won’t need to install standoffs for your motherboard, it also supports ITX through to E-ATX which is pretty awesome and the standoffs are also labeled to match ATX and M-ATX boards but the fact these have been built in as part of the motherboard tray area is a pleasant surprise as I thought I was missing a bunch of standoffs when I first opened the case and box of accessories. I also really enjoy the rubber grommets used in the cable management holes and an interesting feature with this case is the airflow management channel that actually pushes air across your storage devices, the number of drives you can have in this case is mighty impressive with 2 3.5″ drives and 4+2 (converted from 3.5″ drive bays) for plenty of storage choices. Plus it will quite happily house the longer graphics cards available on the market too which isn’t always the case, the only slight issue I’ve seen with the case so far is the front panel isn’t overly aimed at great airflow but that’s easily rectified by popping the front panel off with its 4 tool-less thumb screws. I have to admit looking at the front with the glass panel fitted the red led fans really do look super tidy and clean cut red rings breaking up the front section nicely. 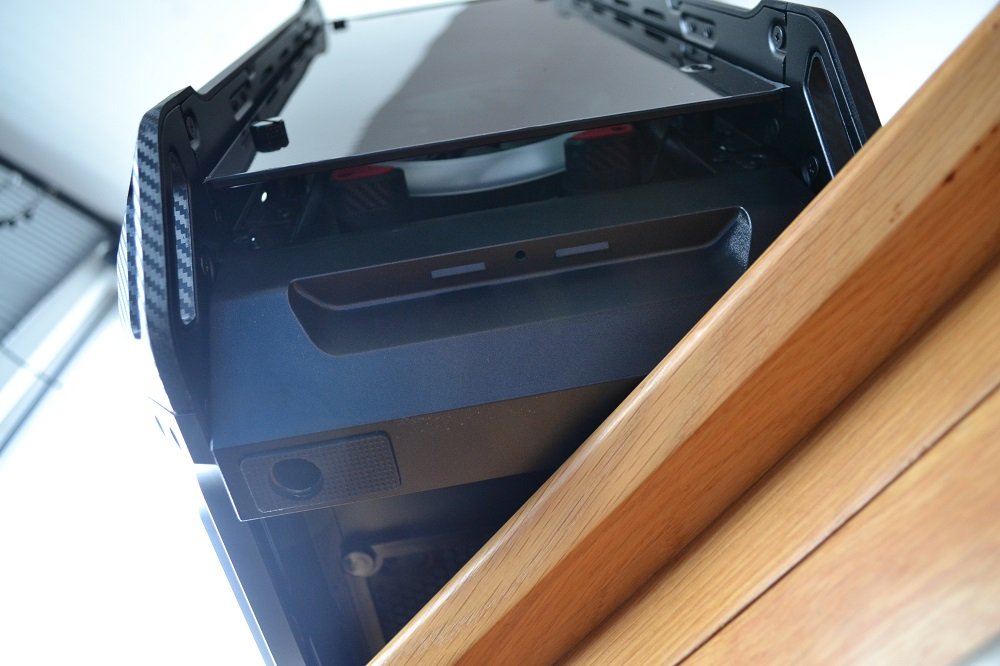 The amount of front I/O the Panzer Evo has is also mightily impressive as most cases I’ve had my mitts on usually have two USB 2.0 and if I’m really lucky a 3.0 port, the Panzer Evo is actually well equipped here with its 2 USB 2.0 ports to the left audio and microphone in the centre and then 2, yep you read that right, USB 3.0 port on the front so no more wiggling around the back of your case to plug in a drive and get full speed for those 3.0 compatible devices. The power and reset buttons, are as have become commonplace, slightly different in size but next to each other with the largest being power and the smaller, of course, being reset and another nice design I spotted after getting the PC built was the HDD activity light it is across the front upper area but almost hidden when the PC is off and when it’s flashing away it’s like a silver slither of light breaking up the dark stealthy look this case has. I feel that this case would look awesome with some RGB light strips inside but it also feels like it may be leaning towards a really nice water-cooled PC build so who knows that might be a future plan! 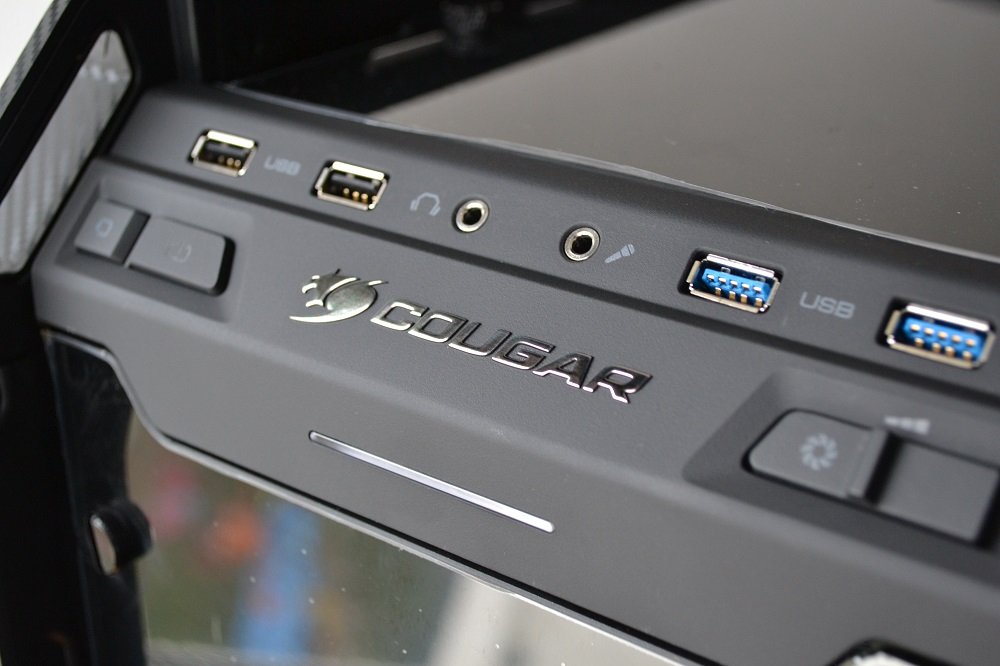 So “How does this rather swanky case perform under day to day use and gaming?”, I should imagine you’ll be asking, and surprisingly the temperatures don’t get too bad even if it’s rocking glass panels in front of the fans. Air cooled seems really good as I have had CPUID HWMonitor running when I get gaming and temperatures don’t seem to get above 60c on my CPU and up to the low 70’s on my GPU but once I lose the front glass panel ooh these number drop and max I have seen is mid 60’s on the GPU and high 50’s on my CPU which isn’t too shabby for a completely air cooled rig. I guess you could also add visual performance to this portion and well I mean just look at the Panzer Evo it’s just a treat for the eyes with the matte sections, carbon fibre printed areas and the gloss tempered glass. The red led fans pre-installed add a splash of bright colour to the mix and make for an overall smart set up. 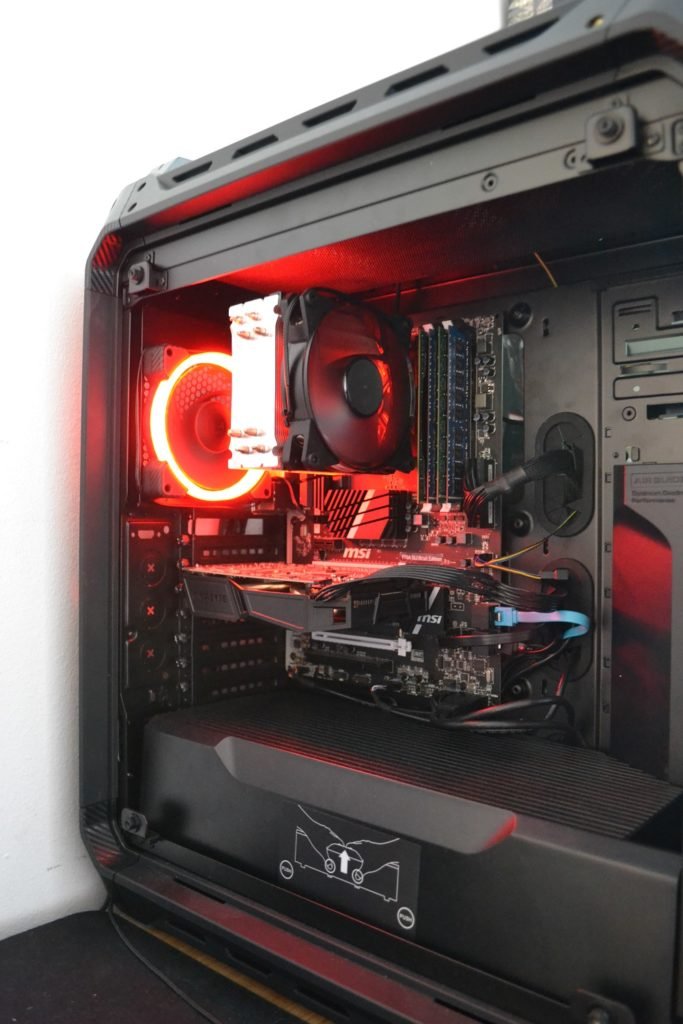 Of course here’s the sweet money shot of the completed build!

This section is a bit I have been looking forward to writing because the design is pretty darn smart, really crisp and modern which is how you would expect most cases to be. The functionality of case is also really impressive with the standoffs being part of the motherboard tray so no need to install any, there is one that’s more of a placeholder to get the board centred and still for mounting. The removable basement shroud is really impressive and certainly makes cable management nice and easy, you can hide the crimes somewhat here, but also it makes for an easier way of getting in to mount the PSU of choice for your build. The choice that Cougar went with on the Pazner Evo for using tool-free screws to hold the glass panels in place but there is also a tool-free drive mounting solution which makes life that teeny bit easier when getting your build on the go. It’s also really nice to see that the built-in fan controller uses a SATA connector to power all of the fans used with the controller, the fans never actually power off on the lowest setting either so there’s a constant flow of air into the case. 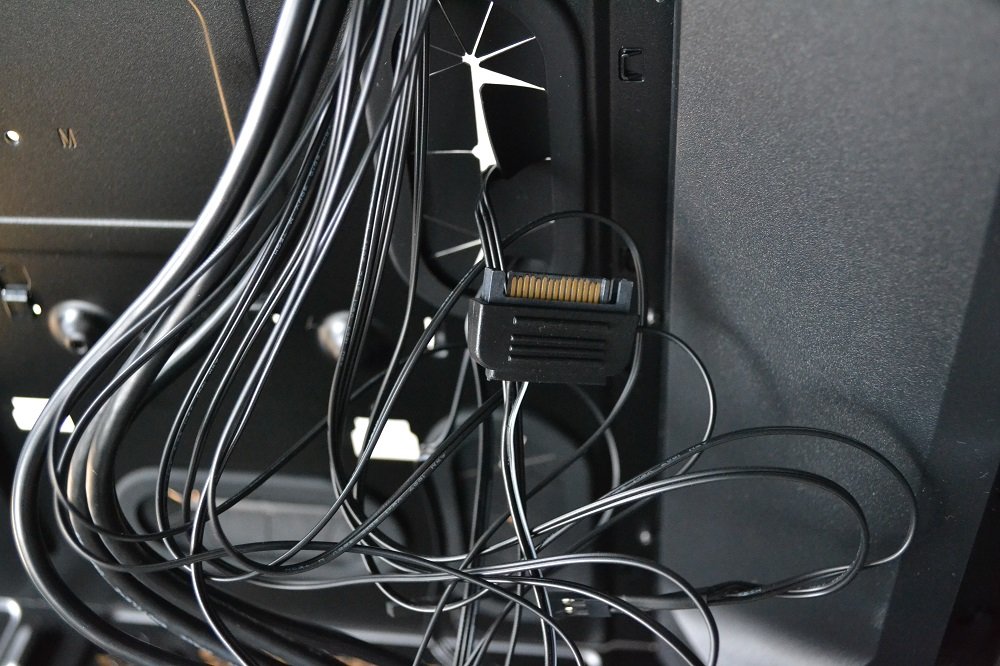 So after the small workout from hefting this beast of a PC case around from building it to my PC desk area it’s time for a closing thought and of course what hot and not with this case. I thank you for staying this far on in the review and whew this case isn’t gonna be fun to take to a Lan, it certainly looks very smart but it is also heavy so you won’t be moving it much once you’re set up.

I feel that if you are looking for a case that can handle an air cooled setup or a custom loop set up the Panzer Evo will certainly handle this. With its radiator support and fan mounting support there’s plenty of cooling solutions available but the tool-free glass mounting and drive mounting makes the building that little bit more enjoyable. I have taken a look online to see where this case is available and so far I have only seen this on Overclockers.co.uk and I have to warn you it is not easily affordable clocking in at £139.99 but this price does get you a very premium case.

This beauty of a case gets a design award from for its tempered glass panels and the fact its designed to be as easy to use as possible, with the tool-free drive mounting and glass pane thumb screws as well as the built-in motherboard standoffs. 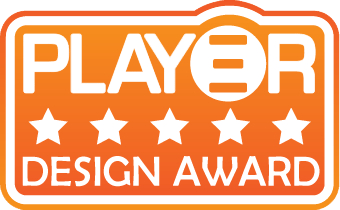 Gavin Bonshor - Sep 12, 2014 0
The Thermaltake Core V1 M-ITX case includes 1 x 200mm intake fan, has support for CPU coolers up to 140mm and can fit even the largest of graphics cards but is this enough to impress me? Read on to find out...
Go to mobile version
%d bloggers like this: