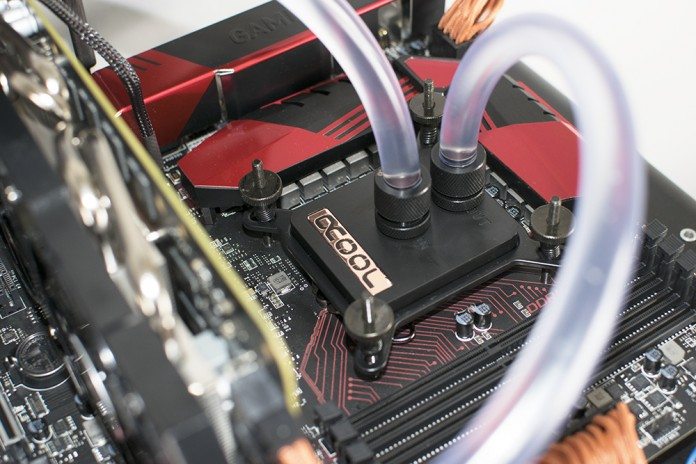 Cooling is as much of a factor in any planned system as anything else really; cooling prevents your components from overheating and in turn, causing potential damage. For CPU cooling, for many years, air cooling was the golden standard and although TEC/Dry Ice/LN2 cooling is more favoured for extreme overclocking, air just didn’t have the “oomph” needed to cool some of the components to maximise 24/7 performance. Enter water cooling, which is now a massive industry in its own right with many different companies competing for a market share; one which different people have different preferences, but it comes down to many different factors of choice.

One such company is Alphacool, who are based in Germany and have not only become one of the most popular water cooling component manufacturers in the game but have a decade of experience under their belts making them a force to be reckoned with!

Some people will be asking, why not just buy an AIO closed loop CPU cooler and be done with it? Well in all honesty, AIO’s tend to compete alongside the top performing air coolers; this is good, but water cooling not only offers better thermal performance, but if done correctly it’s also much quieter!

Spec’ing up a water cooling loop and finding advice on the internet can be a tedious task, which tubing size to use? Which fittings? What block? Well Alphacool not only sell separate components, but they also do water cooling kits which do still require assembly but comes with everything inside to make your own loop; usually at a slightly cheaper cost than buying the parts separately. One such kit is the NexXxos Cool Answer 240 D5/ST which features a 30mm thick 2 x 120mm (240mm) radiator with a bay mounted reservoir; powered by a VPP655 (Laing D5) pump for maximum performance.

So what’s included inside of the box? Well let’s take a look at each component separately shall we…

First of all, we have the Alphacool single Laing D5 5.25 dual bay reservoir and Alphacool VPP655 single pump; this is essentially a D5 pump as previously mentioned. The pump itself comes with a spare O-ring and the reservoir comes with one pre-installed. Installation of the pump and reservoir is a very simple process and requires you to remove the hexagonal bolts with the provided Allen key from the back mounting ring. You need to make sure the O-ring is snug in position and if possible, not damaged as a damaged O-ring can be the difference between a solid connection and a leak.

The fill port on the front of the res does take a bit of unscrewing, but once it’s loose, you can pull it out and fill it up (when installing of course). Once you have done that, reposition the locking ring over the top making sure the power cables have been passed through (don’t lock it with cables suck between the sides or it won’t get a good lock) and then simply re-mount the bolts back into the same position. Voila, a solidly leak less mount between the Alphacool pump and reservoir.

The pump itself has a variable adjustable speed which allows you to not only control the pumps water pumping power, but a lower setting allows for quieter operation; very important depending on your preference!

The speeds for each step are as follows: Next up we have the slim but top quality Alphacool NexXxoS ST30 full copper 240mm (2x120mm) radiator which comes with M3 30mm and M3 35mm screws for mounting fans. This comes with a pair of Alphacool branded NB-eLoop 1200rpm 25mm thick cooling fans. These fans have deep, but clear finish and look relatively good. They also feature braided fan cables which is always a pleasure to see! To connect the different components such as the radiators, CPU block and reservoir, Alphacool have included 6 x HF 13/10mm G1/4 threaded deep black compression fittings which not only look good, but are sure to fit with most user’s colour schemes. This particular Alphacool CPU block (NexXxoS XP3 Light) supports a wide variety of Intel and AMD sockets. A full list can be found below:

No mention of AMD’s FM2 or FM2 compatibility, so we assume that this form factor isn’t supported. The CPU block itself features a copper base which is designed for superior cooling as opposed to other types of metal usually used on blocks. The NexXxoS XP3 Light features an inlet and an outlet with support for G1/4 fittings; handy that 6 are included with this pre-packaged bundle! 0
Thermaltake have sent me the C240 DDC Hard Tube Liquid Cooling Kit, typically such loops are purchased in parts rather than kit form and this aims to simplify the buying process by including a set of parts that are compatible yet flexible enough to suit a multitude of builds.
Go to mobile version
%d bloggers like this: