Everyone loves a collaboration, right? So when the news broke back in May this year that Cryorig were teaming up with NZXT to supercharge their already impressive H7 CPU cooler, our request went in for a sample as soon as they landed.

The result of this project is the Cryorig H7 Quad Lumi… A cooler that boasts a tweaked design to improve performance, plus the addition of RGB lighting controlled by the NZXT CAM software.

The Cryorig H7 Quad Lumi has support for all the major Intel and AMD sockets, including AM4. The sockets supported are:

Packaged as standard with the H7 Quad Lumi is a 120mm fan, with a maximum RPM of 1600. Powered by a 4 pin PWM connection, the fan also boasts a white led during operation.

In addition to the fan header, the main unit is also equipped with a USB 2.0 motherboard connector, which powers the RGB lighting effects. 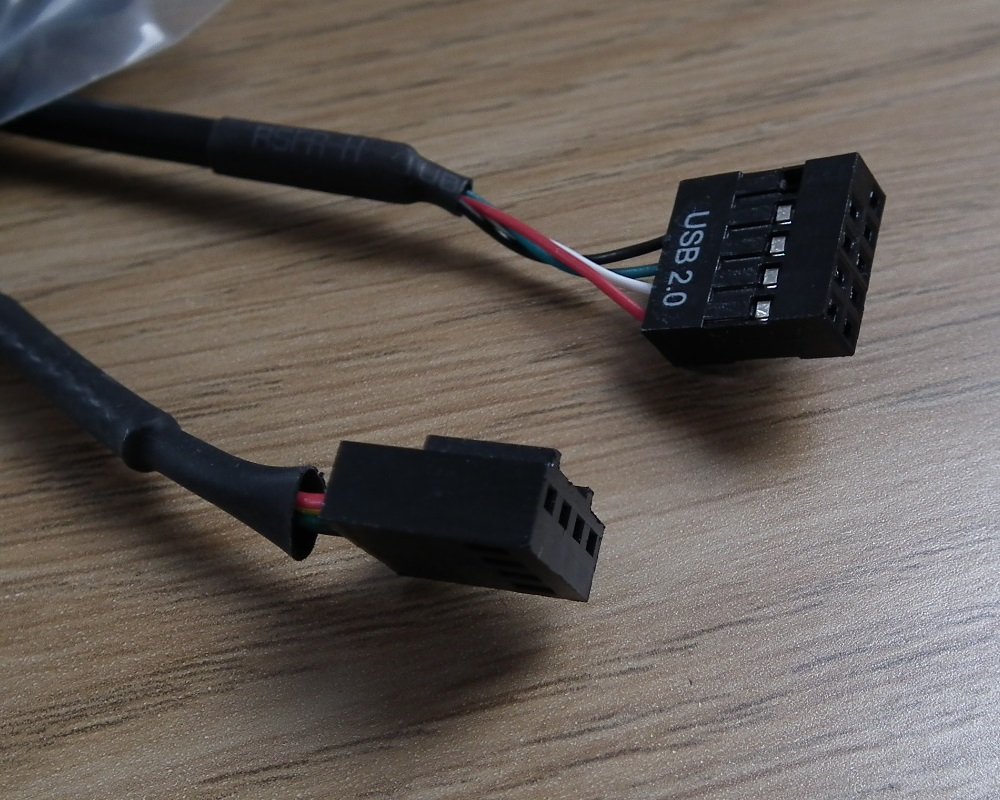 The cooling array sports a striking design element, that Cryorig have badged “Hive Fin Technology”. This promises enhanced efficiency, by exhausting hot air quicker thanks to this design. 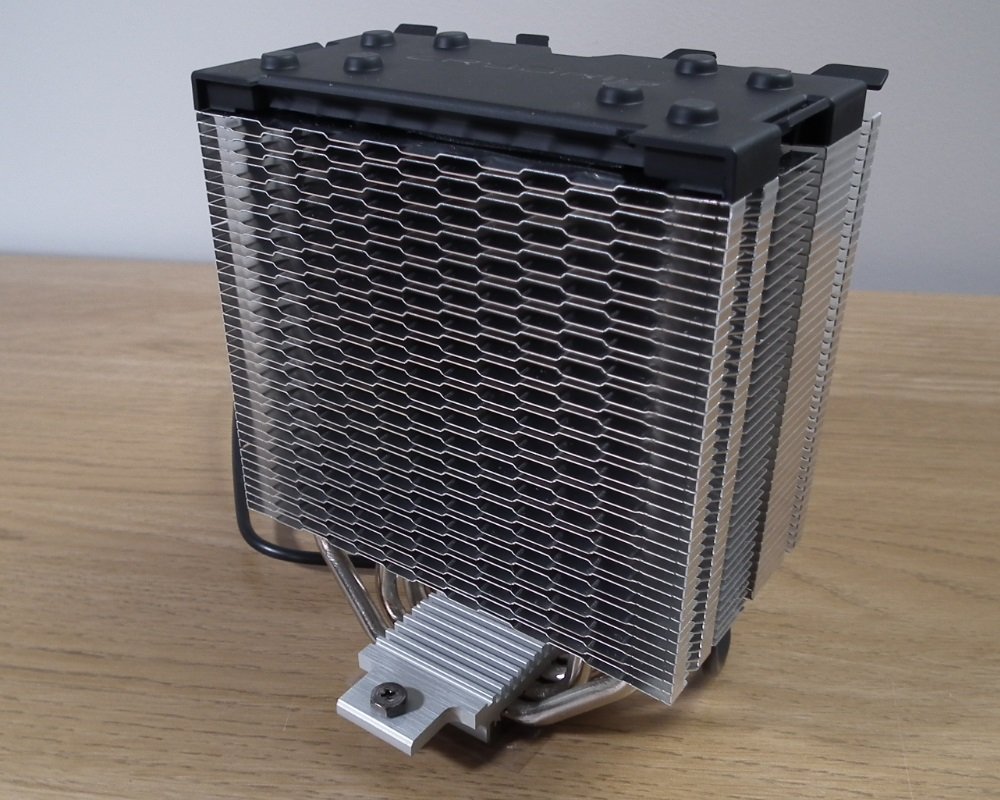 With the unit fully assembled, I must say it looks really good. Cryorig have resisted the temptation to over use transparent plastic on the fan, keeping it to the fan blades alone, which contrast nicely with the black outer casing.

The plastic cap that sits atop the fin stack gives it a stealthy look, but offers a little glimpse into what is to come during operation, with the Cryorig logo etched into the centre. I’m already a fan of how the H7 Quad Lumi looks… and it hasn’t even shown us its party trick yet! 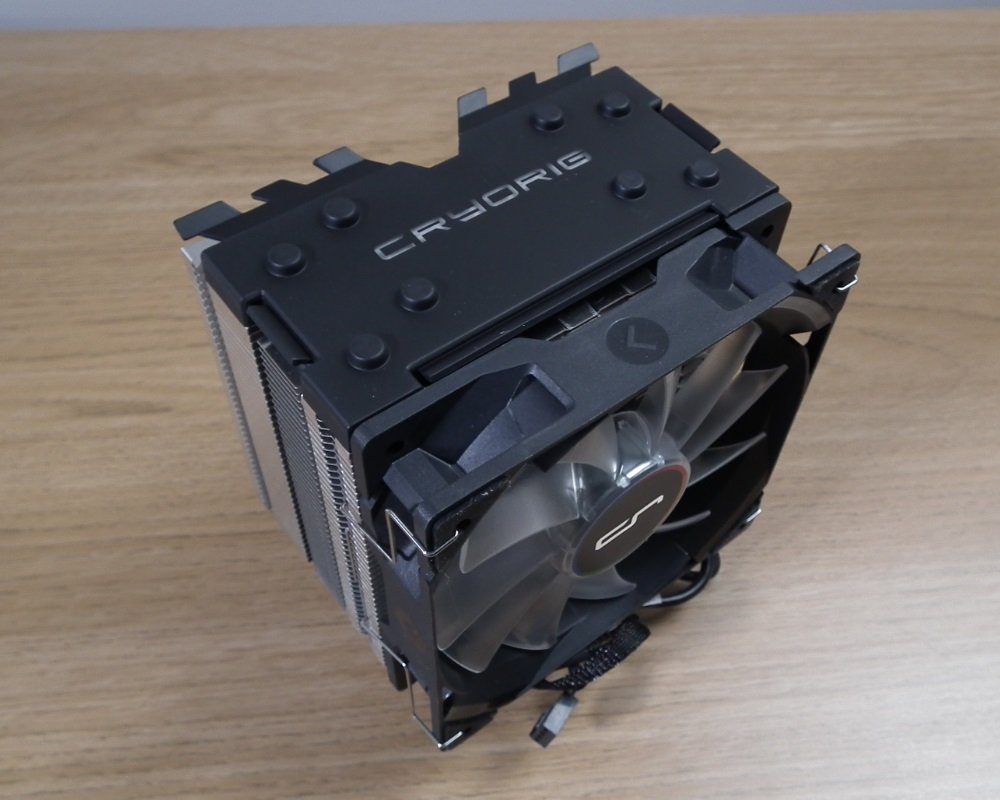 The RGB effects are controlled using the NZXT CAM software. I have fallen foul of this software in the past, when it refused point blank to work with a Kraken cooler. However, it seems that those gremlins have been ironed out, as once downloaded it performed exactly as it should, and allowed us to have a play with the lighting effects on offer with the Cryorig.

The light emitting from the bottom of the unit floods the motherboard with colour, with the Cryorig logo also bringing the top of the unit to light nicely, set against the black backdrop. 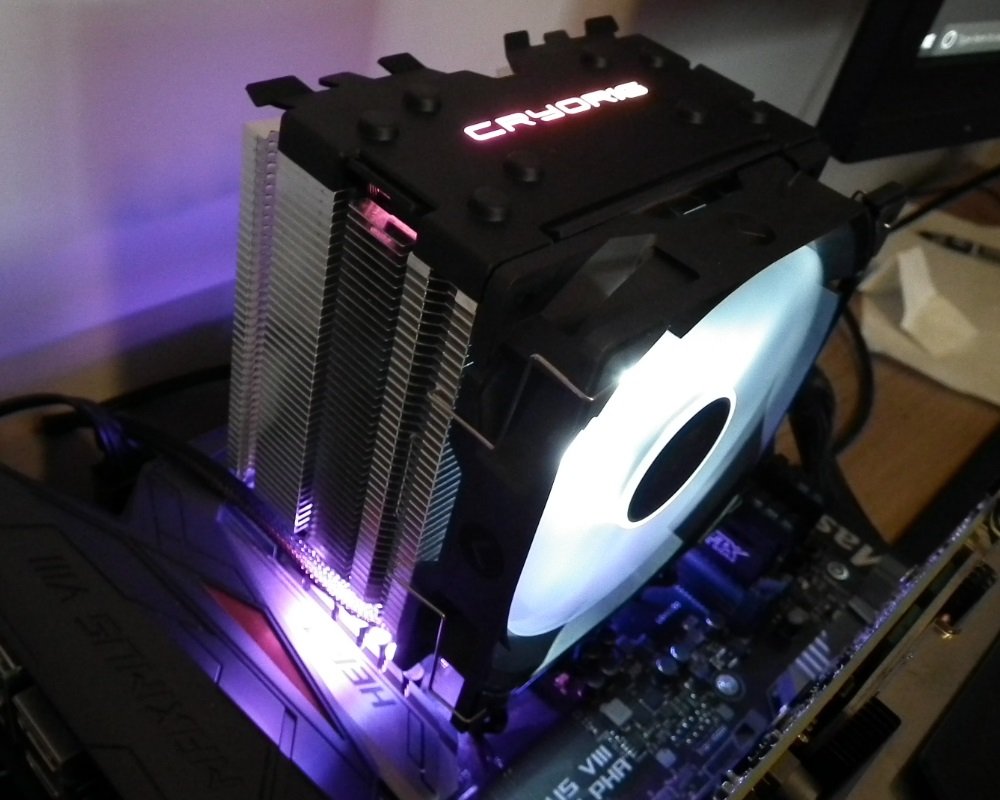 So the unit looks amazing… but how does it perform? 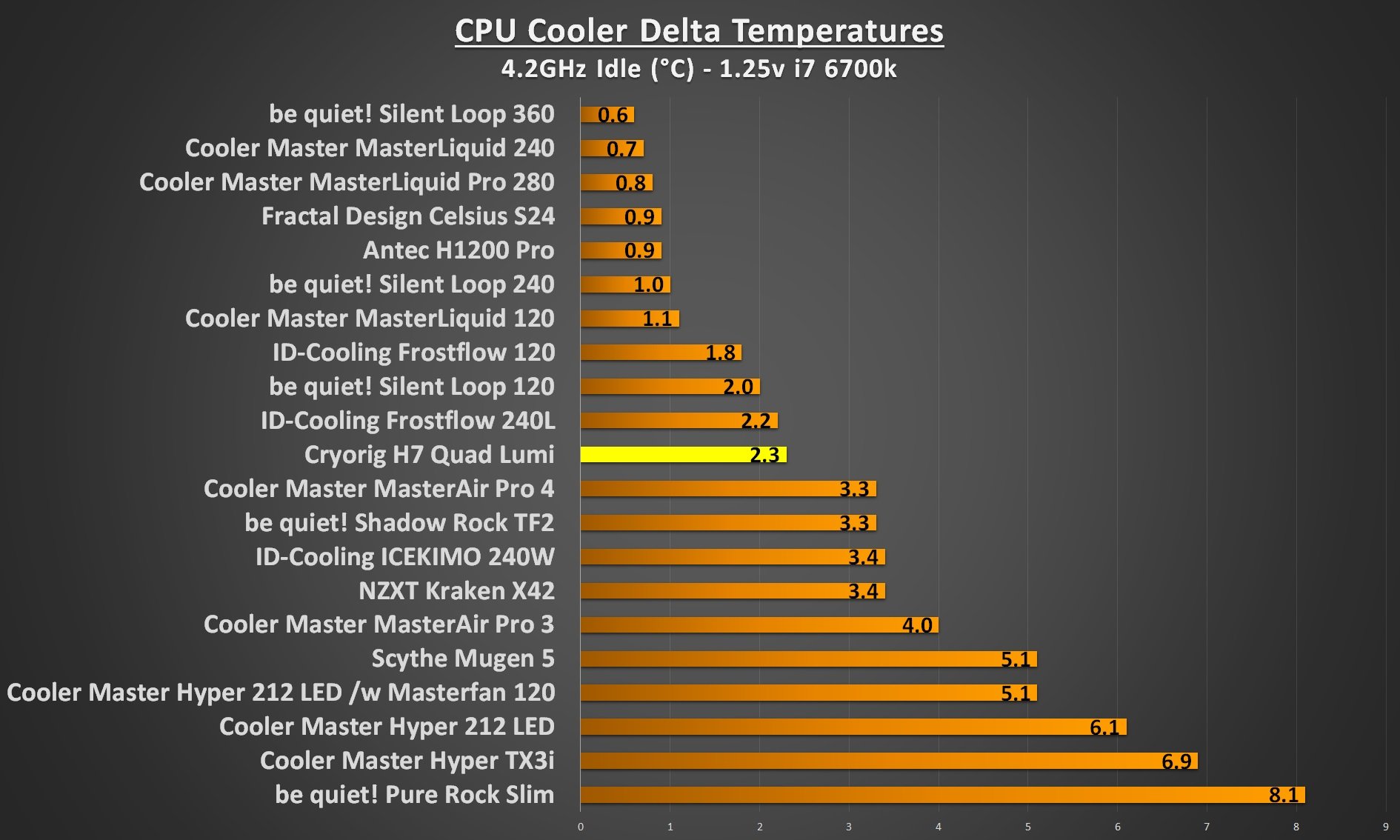 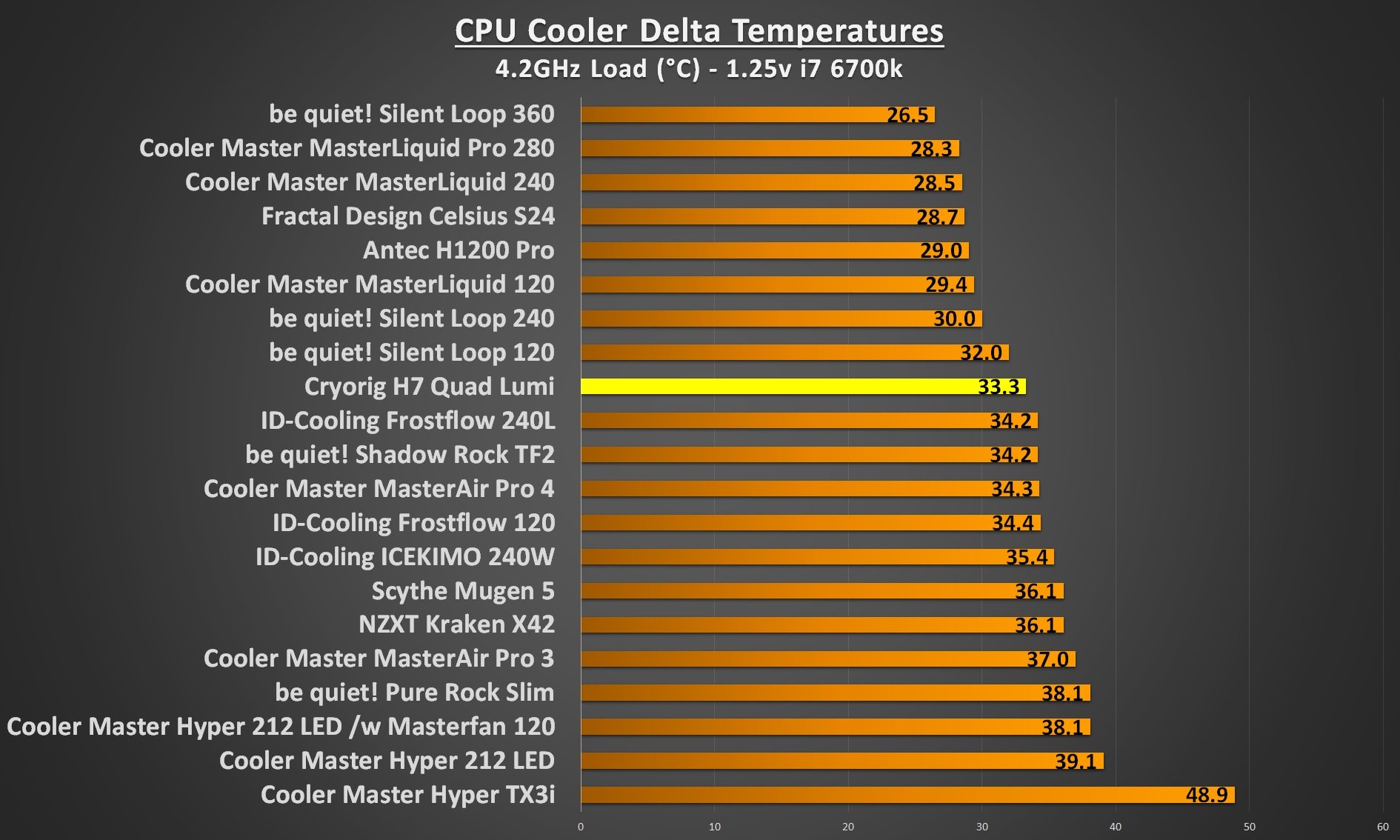 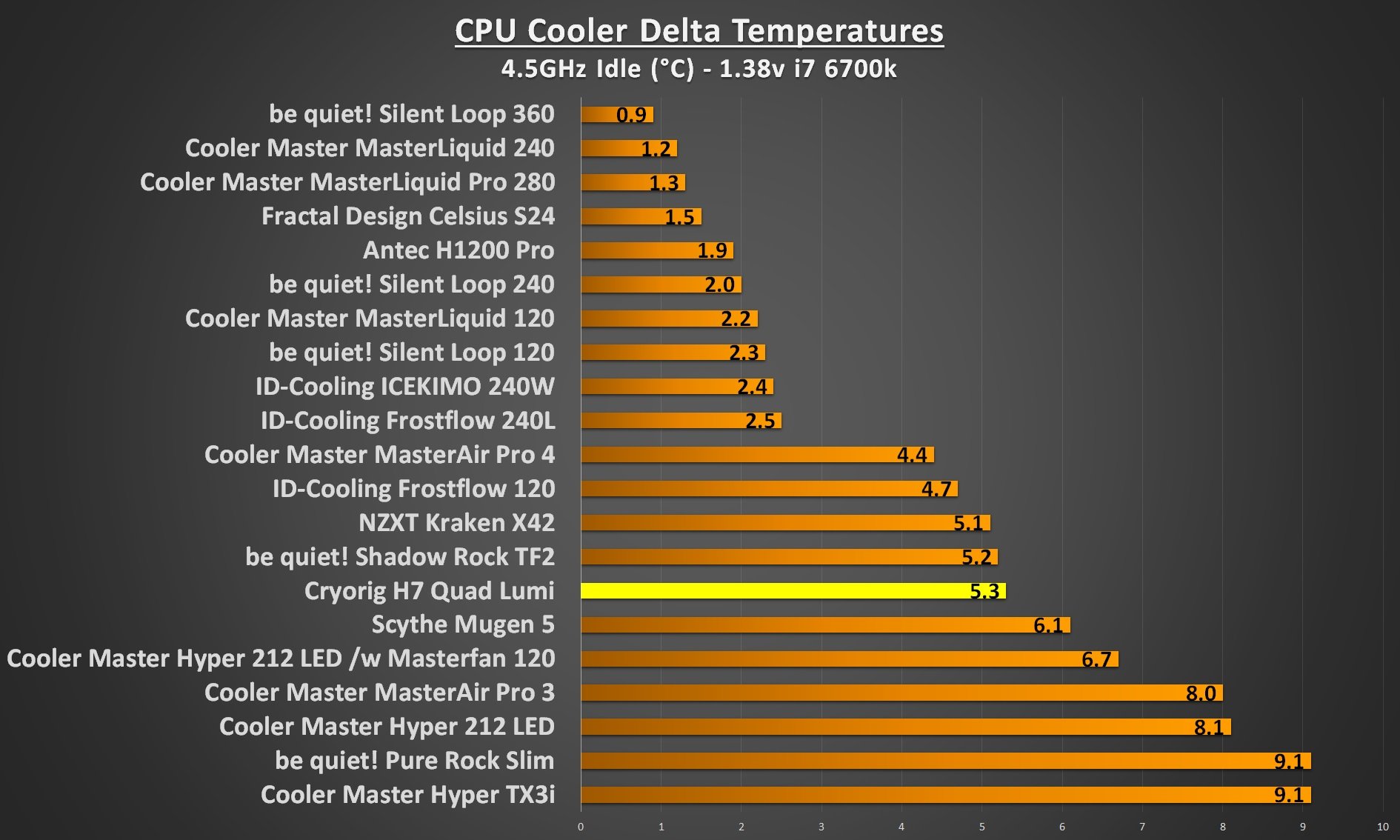 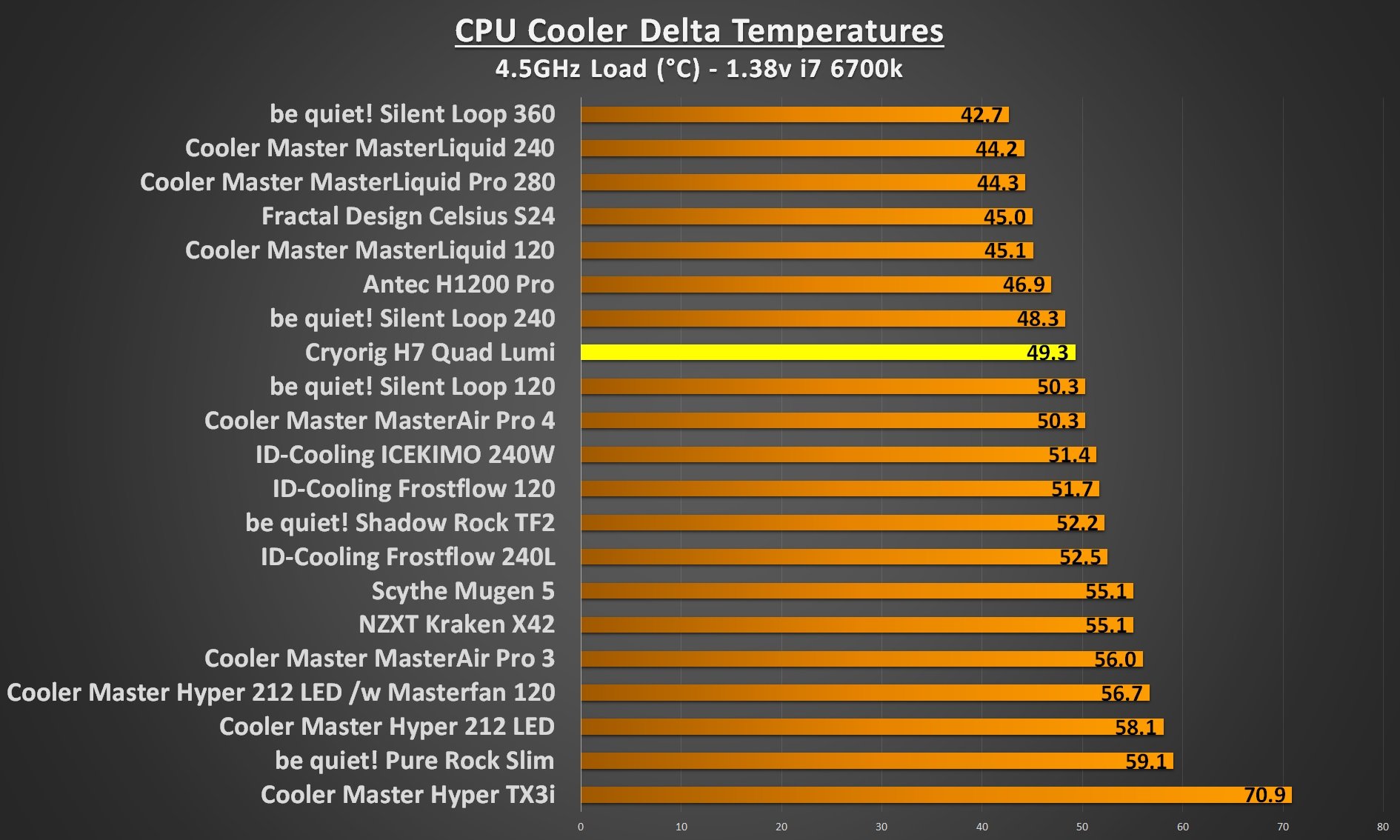 Apart from an anomalous reading during idle whilst overclocked at 4.5GHz, the performance of the Cryorig H7 Quad Lumi is fantastic… and dethrones the previous best air cooler we had previously seen, in the shape of the Cooler Master MasterAir Pro 4.

The H7 Quad Lumi sits at least a degree colder than any other air cooler in our charts, and is now the benchmark for others to aspire to.

I am a huge fan of the design that Cryorig have employed for the H7 Quad Lumi, and RGB fanatics will be in awe of the amount of light that the unit emits, particularly from underneath the fin stack. If RGB isn’t your thing at all, then you can turn them off… or just go for the standard H7 Quad, saving yourself a few quid in the process. Talking of money…

The H7 Quad Lumi isn’t cheap… at the time of the review it is retailing for £55.99 in the UK, which is around a £20 premium over the standard H7 when that launched a few months ago. However, as well as the addition of the RGB light show, Cryorig have tweaked the design for additional performance, including an additional heat pipe, taking the total up to four on the unit.

There we have it… a cooler that looks amazing, and performs just as well. The only thing it could possibly be faulted on is that it isn’t cheap. When we hand out our Platinum award, price doesn’t come into it anyway… and that’s what the Cryorig H7 Quad Lumi is getting, the Play3r Platinum award. 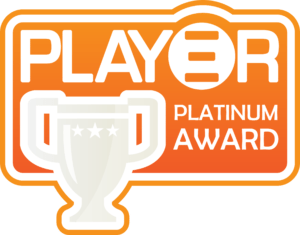 Huge thanks to Cryorig for sending the H7 Quad Lumi in for review.

– Excellent performance… the best air cooler we have tested to date
– Stunning looks, and RGB fanatics will love the light show it gives
– Easy to assemble & mount to the motherboard

Dave McMahon - Sep 27, 2017 0
Today, we have the latest CPU cooler from the guys over at Raijintek, in the shape of the Leto. How will this budget friendly air cooler fare in our tests?
Go to mobile version
%d bloggers like this: