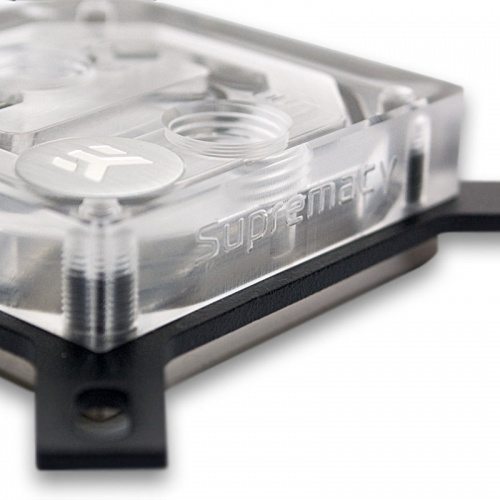 With the latest un-locked processors on the market (Namely Haswell), comes wave upon waves of overclockers/enthusiasts looking to get the most out of their newly acquired hardware.  One question springs to mind when you hear the word over clocking and that’s cooling, how do you cool an overclocked processor efficiently, quietly and keep it at budget?  Well one solution is water cooling, and one of the biggest brands on the market have a new CPU Block designed to tick all 3 boxes whilst remaining stylish and sleek.

The EK Supremacy CSQ Clear, which is the successor to the EK-Supreme HF water block, is a tool-less high quality water block which caters for all the major mounts; this block is universal.  The main differences between this block and the older Supreme are the improved design which results in up to 20% better flow rate and up to 2c lower CPU temperatures.  Will this make much of a difference with the latest Haswell processors and will 2c be enough for the disconcerting overclocker?

The Supremacy Clean CSQ block comes neatly packing inside a distinctive white and orange box, which would easily stand out in a retail environment.  The circles on the white section of the box also depict the block design as these circles also feature on the water block itself.  There is information displayed such as the brand, model number and the type. On the rear, there is technical data which depicts the specs and what is included in the box.  The EK logo is displayed in the bottom right hand corner and the information is displayed in 4 different languages; English, German, French and Spanish.  This tells me the product is designed for the European market but can obviously be used worldwide. Inside the box, bundled with the EK Supremacy we have the following items:

Everything needed to mount the water block is included, including the fantastic Gelid GC-Extreme thermal paste which I highly recommend for water cooling. Taking a first look at the EK Supremacy Clean CSQ – Nickel CPU block, you can clearly see the clear and crisp nickel design.  It’s nice and subtle and works really well and as you can see, it has 2 x mounting holes for 2 x 3mm LED lights which allow you to customise the block further other than coloured fluid of course.  One idea here would be to use UV reactive fluid and then 2 x 3mm UV lights to give a very nice vibrant UV glow (if you’re into that sort of thing). Looking at the Supremacy block from the side, we have the etched Supremacy logo which really does look good and a little branding never hurt anyone.  Also in view is the silver EK logo on the water block as well as the outlet for tubing, which I will add is G1/4.  Both the inlet and outlet are this fitting and this is the only fitting type that will fit this water block, so bare that in mind when selecting fittings to go along with the EK Supremacy blocks. Taking a look from the top down, we can see both the inlet and the outlet and a much better look at the attached mounting plate, which has a nice black finish.  The block itself is really clean and I have to say I really do like the design.  The nickel really sets the block off perfectly in my opinion and I can’t wait to test out its performance. Here I have pictured the base, first with the please remove before use label which is pretty self-explanatory.  If you try and install the block with this on, it will seriously hurt thermal performance as paper isn’t exactly a good thermal conductor.  Also pictured, is the base with the label off, which is a nice shiny nickel finish. The installation of a water block is usually a very painless experience and only takes a few simple steps.  The EK mounting system is no different and took around 2 minutes from start to finish; it was quicker installing than stopping to photograph as the process is simple.

Starting with the back plate, there is a rubber cut out that goes around the socket area.  One can only assume this is to protect the motherboard from being scratched by the back plate when installing and will reduce any vibrations due to water flow, albeit this shouldn’t be a problem anyway.

The next step involves lining up the Intel back plate (note LGA 2011 is different altogether) and lining it up with the existing mounting screws.  If aligned correctly, you can see through to the other side through the rubber mounts. Moving on, the next part of the installation involves screwing the mounting screws into the back plate; don’t forget to put the washer to protect the motherboard from damage, especially if you are bad for over tightening.

The next part of the install requires thermal paste (Noctua NT H1 in this case) and then EK Supremacy Clean CSQ block itself to be placed over the 4 mounting screws.  It should be a plush fit and please make sure the base is onto the CPU and that thermal paste has been applied properly or this could cause a loss in thermal performance. I thought it would be a good idea to illustrate the actual mounting bolts and the springs, which mount the EK Supremacy to the rest of the mounting kit.  Here we have 4 x locking nuts and 4 x springs which help keep pressure down for a tighter, more flexible fit. Next up, the 4 springs go over the screws; as you can see there is a little bit of thread left over, this is for the 4 screw bolts. The final part is probably the easiest part, just simple screw the locking nuts in while applying pressure to ensure the thread and the locking bolt meets.  The best and most efficient way to ensure the mount is even is to start with 2 corners, so for example purposes say the top left and bottom right.  The trick is to tighten both at the same time, ensuring equal amounts of pressure to keep the mount even. Here we have the finished article, installed onto the ASRock Z87 Extreme3 motherboard, ready to test the blocks performance.  Let’s do that, starting with the test setup… To test the capability of the coolers/water cooling equipment, our testing methodology is simple.  We measure the temperatures after 10 minutes on idle, both at 3.9GHz which our samples stock turbo boost speed and with an overclock of 4.5GHz.  To test the loaded temperatures I use prime95 and its torture test for 10 minutes and record the max temperature given.

So now it’s time for the conclusion and my final thoughts on not just the performance of the EK Supremacy Clear CSQ – Nickel CPU Water block, how does it look?  Does the Supremacy reign supreme?  Let’s find out.

Starting with the key area, the performance, there isn’t too much of an improvement over the top performing air cooler that we tested, but take into consideration the mini heat wave in the UK and that ambient temperatures were probably the hottest I have experienced since I started water cooling, I can imagine in cooler weather, the temperatures would drop as delta temps do have their limits in my opinion.  Taking into account the heat absorbed by the radiator (was hot to touch) the water cooling loop still out performs the air coolers in the load tests comfortably.  Overall the performance of the EK Supremacy was fantastic and I felt the limitation was not the CPU block, but the sweltering heat of the room and super baking radiator.

In terms of aesthetics and design, the mounting system and fantastic sleek looks of this block I feel it is a compliment to EKWBs range of water cooling equipment.  The Clear CSQ block in my opinion would fit in with nearly every water cooling configuration and with the addition of the 2 x 3mm LED holes, can be customized to how you want it to look inside your rig.  One thing to also mention is the availability of custom tops for the Supremacy water blocks which gives you more options in terms of how you want your CPU block to look.  The mounting system is a total diamond and is a real compliment to EK, especially for those who want to be able to swap CPUs within seconds; just simply unscrew the 4 nuts, take the block off, change CPU, re-apply thermal paste and re attach the block and screw the nuts back on, voila job done.

The barbs/compression fittings needed for the Supremacy block are G1/4 and will allow you to select from the 99th percentile of fittings on the market, of course EK do their own selection but there are others so it really depends on your style, as water cooling is not just about performance anymore, but also about aesthetics and the Supremacy ticks both boxes.

Price wise, the Supremacy does cost a premium; in the UK it is around £56.99 which is competitive when you consider the other blocks on the market such as the XSPC Raystorm which retails for around £50 also.  The introduction of the Supremacy blocks does seem to have brought the Supreme HF CPU blocks down in price slightly, but the performance increase via the Supremacy is worth the extra in my opinion.

All in all the EK Supremacy CSQ Clear – Nickel CPU water block performs to a great level, looks great and is priced exactly where I would expect it to be, at the top end of the pricing structure.  With lots of different additions such as the EK RAM water block and even motherboard water blocks which have become more common with each platform, there is no shortage of things to water cool these days.  I feel EK are onto a winner and if you’re looking to water cool, make sure you check out the Supremacy range as you won’t be disappointed.

EK have informed me as other tests have been done which shows if you mount the water block 90 degrees counter clockwise, it reduces the temperatures enough to make a difference.  These tests were performed by “Moonman” over on the Xtremesystem.org forum.

Another neat addition to the arsenal of products from EK, is the precise naked Ivy mounting kit (works with Haswell also) which means you can de-lid your CPU and further reduce temperatures.  This is only advisable if you know exactly what your doing and the implications of what you are doing.

Thanks to EK for the sample and until next time, keep up the good work! The EK Supremacy water block has multiple options available for not only performance, but also in customization, there is a combination ready for your loop and if you’re in the market for a top performing water block which not only looks great, is easy to mount and performs like a true minion of Triton, then make sure the Supremacy is very high on your list.

0
Anyone who has ever heard of Noctua will expect the NH-D12L to perform well and it did! It offers excellent cooling performance out of the box, and is better, as expected, with the second fan attached. It sits firmly between the U12A and the U14S which both have bigger heatsinks.
Go to mobile version
%d bloggers like this: