The rise in popularity of AIO’s over the last few years with enthusiasts and general PC users has reached an all-time high and virtually all of the elite CPU cooling companies (barring Noctua) have at least one model of closed loop liquid cooling systems available for sale. With all these liquid AIO options being available for processors and CPUs, what about graphics cards? Would a similar system work as well for graphics cards and how could something be implemented at a low cost, but efficient, temperature reducing way? Enter the Kraken G12 from NZXT…

What is the NZXT Kraken G12?

The NZXT Kraken G12 is essentially a mounting kit designed to allow for attachment to a graphics card in conjunction with a closed loop liquid cooler (AIO). Not only does the G12 support NZXTs Kraken X42/X52/X62 all in one coolers, but models from companies such as Corsair, Antec, Thermaltake and even Zalman. A full compatibility list can be found below in the technical specifications, but here is what NZXT has to say about their Kraken G12:

“Quickly mount any Kraken Series liquid cooler onto graphics cards with the Kraken G12 mounting kit. It delivers a 40% increase in cooling capacity over stock cooling and features a newly designed bracket with an easier installation process versus the Kraken G10. Plus, the G12 is compatible with more than 30 liquid coolers on the market.”

As you would expect from a product bearing the NZXT branding, the box features a nice white and purple contrasting design; it’s like someone in their design team has a fetish for purple, but I’m not knocking it… I quite like it! On the front of the box, we have a nice and simple illustration of the Kraken G12 which looks minimalistic, but we will get to that in a bit… 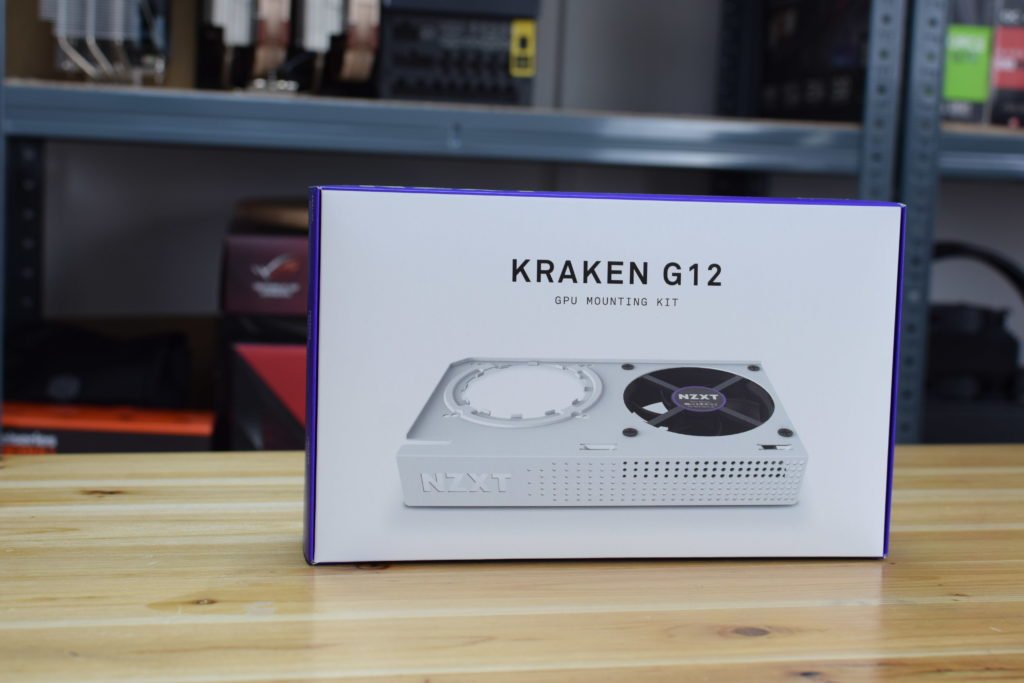 Inside the box, NZXT has included an installation guide which is rather comprehensive with step by step instructions on how to install it to your chosen graphics card, as well as connection to an AIO cooler in the supported list (refer back to the technical specifications if you have any concerns about compatibility).

Aside from the Kraken G12 bracket itself which inside the box appears to be black (it’s white on the box!), we have mounting screws and brackets to and from your GPU, as well as a 1500rpm 92mm fan. This features rifle bearings is 3 pin and is 25mm in depth, which is the same as all standard case fans.

There are two different colour versions available for purchase at retail, but if you’re unhappy with either of those, it looks fairly simple and easy to mod; perhaps a coat of paint would add a bit of jazz to it? You would most certainly void your warranty though… 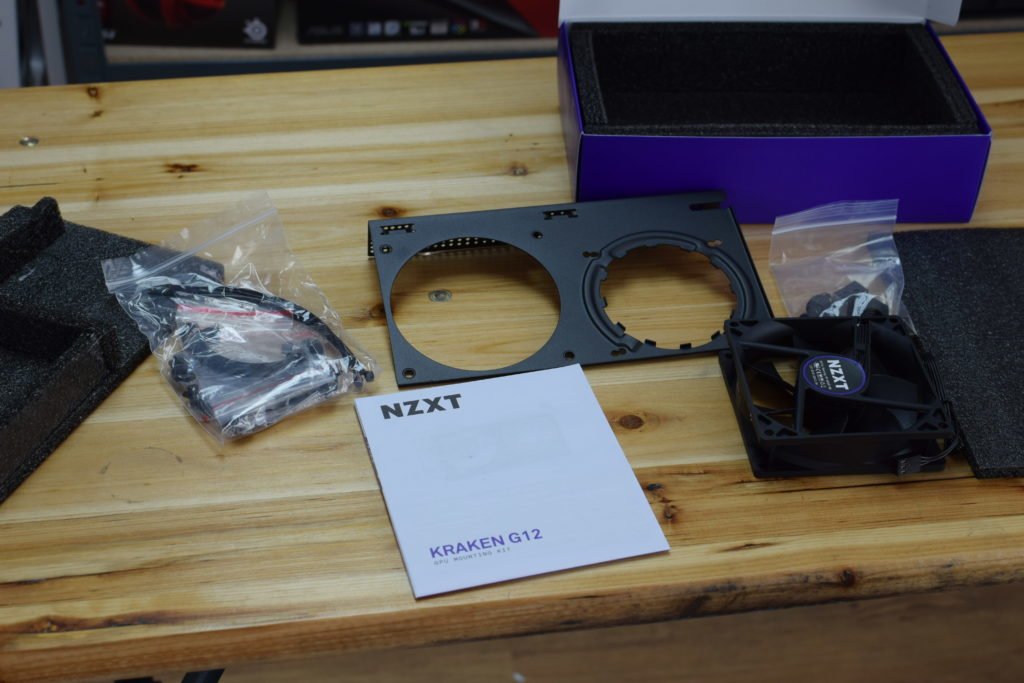 Taking a closer look at the G12 bracket itself, there isn’t really much to look at due to its very simplistic and basic design. Through the main panel itself, there are large holes for mounting of the 92mm fan which is specifically designed for VRM cooling, with the other hole being for the AIO closed loop cooler which you decide to use. 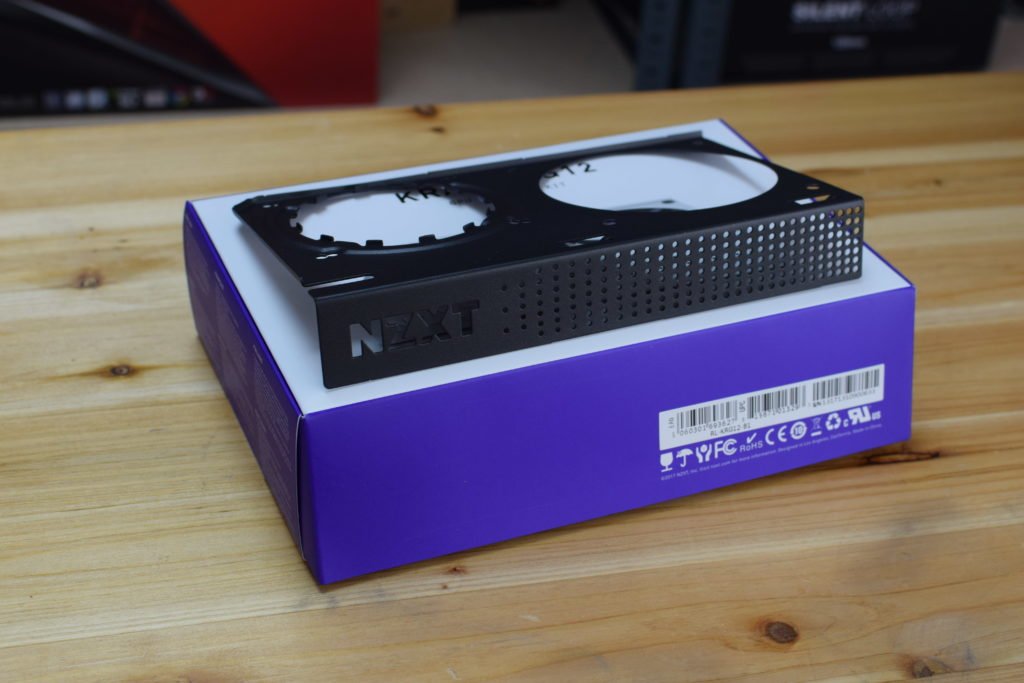 On the side of the bracket, we have a stenciled out NZXT logo with the right-hand side including ventilation holes for venting out the air the 92mm 1500rpm VRM fan blows out. This could be a caveat for some people who don’t like the idea of warm air being dumped back into the case, but for the design itself, it’s relatively good and not much can really be done about that! 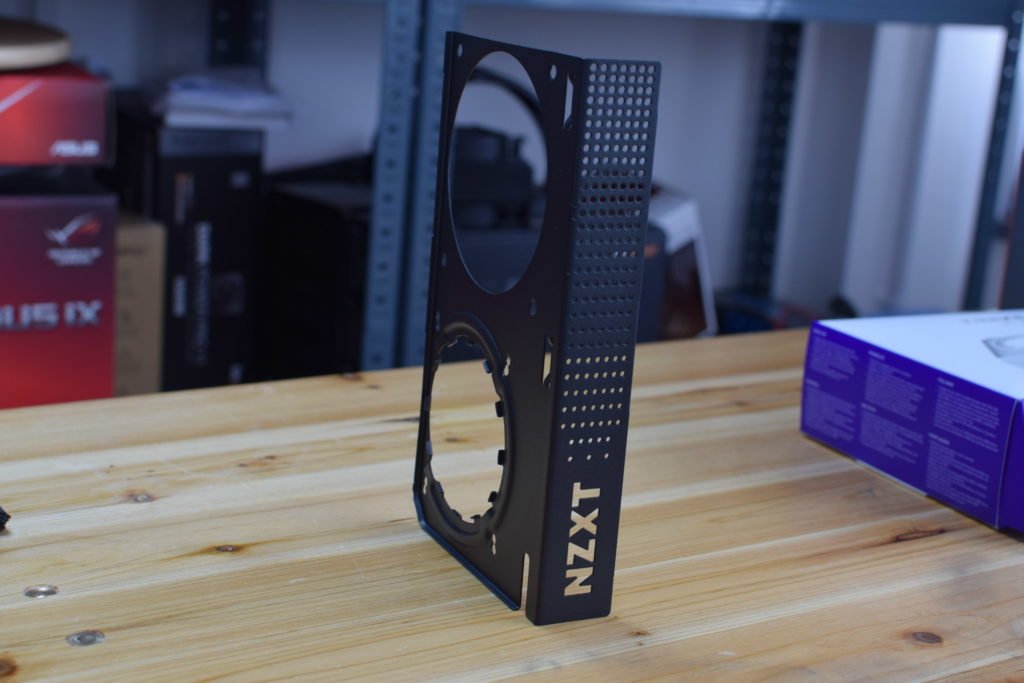 For the testing of the NZXT Kraken G12 GPU bracket, NZXT also kindly sent us their Kraken X42 AIO cooler which we have actually previously reviewed here. As previously mentioned, over 30 different AIO’s are actually compatible with this cooler, but as personal preference and for testing purposes, we will be going all out with NZXT for the review. 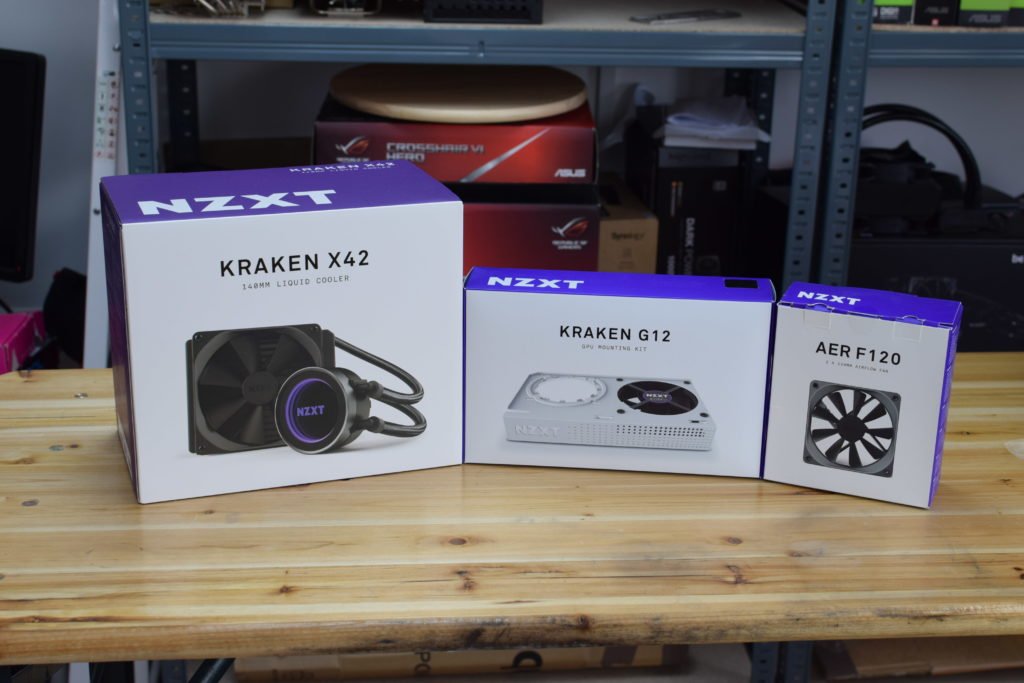 The installation process is a simple, but effective 10-step affair with the manual (included in the box) documenting every step of the way rather thoroughly.

I recommend downloading the PDF version of the manual and taking a look for yourself so you can not only get accustomed to the installation method but of course, it should answer any questions you do have about the installation itself.

To compare the cooling performance with the Kraken G12 installed with the Kraken X42 140mm AIO CPU cooler, we have the fantastic ASUS GTX 1060 STRIX OC graphics card on our test bench. Below are the results by way of a simple graph:

As you can see by the above results, the NZXT Kraken G12 in combination with the Kraken X42 140mm AIO CPU cooler has made a massive dent in comparative performance to the ASUS Direct CUIII GPU cooler on our test bench GTX 1060. At full load under a 10 minute run of Furmark while at a steady room temperature of 26c (it gets warm in the office), the NZXT GPU cooling solution managed to shave off an impressive 20c from the already powerful aftermarket card.

I have to admit that I was a little skeptical of the cooling performance of a simple metal bracket with an all-in-one CPU cooler attached, but I have to give credit where credit is due to NZXT; their G12 bracket does the job brilliantly. Let me digest it down into our scoring categories so it’s easier for you to see why it’s a good product (or not) and to give viable feedback to NZXT on how to improve…

The best element of the NZXT Kraken G12 is how well it performs in conjunction with NZXT’s own Kraken X42 AIO CPU cooler. In our testing, we managed to shave an additional 20c off the load temperatures with the ASUS GTX 1060 STRIX graphics card which already has one of the best air-cooled solutions installed in the shape of the DirectCU III GPU cooler. This isn’t just good, but it’s absolutely great. The idle temperatures are also good, but in comparison, the margin looks bigger as the DirectCU III features a semi-passive design.

The only concern I have is VRM temperatures and I don’t believe the cooling fan is adequate to properly cool the surface area of bare VRMs over prolonged periods of time. It would have been nice for NZXT to include some small VRM heat sinks to maximise heat dissipation. Other than this, it’s a big thumbs up from me!

Although there isn’t much to the design of the Kraken G12, it is after all a simple machined metal plate with the right cut-outs in the right places, but the overall design is good. The G12 is available in white or black and does look rather good when installed, although the placement of the fan cable and way you mount the AIO block into the plate is paramount to looks; everyone has different personal preferences here. Overall the design is decent, but it could look a little nicer, in my opinion, especially the included VRM cooling fan.

Now value is a tricky one to determine because although the Kraken G12 costs a meagre £34.99 from various retailers, the biggest element of the cost is a compatible AIO suitable for your needs. If you take today’s total solution into consideration, the Kraken G12 and X42 come to around £155 which is quite a large amount for a cooler. The DirectCU III cooler of course loses out in terms of performance, but the temperatures at full load are well within acceptable limits.

I have to be that guy that says it, but if you already have a decent aftermarket cooler on your card, you’re as well sticking with that or when planning a purchase, using the extra £155 upgrading the core of your GPU to the next level. That being said, the Kraken G12 makes a lot more sense if switching from a reference card such as a GTX 1080 Ti Founder Edition where temperatures will make much more of an impact on overall performance.

Thanks for reading our NZXT Kraken G12 review, but it’s time for my humble, but final thoughts on whether or not it’s a viable purchase. Is it? Well, yes, it is! If you’re rocking an already warm card such as a reference model that’s compatible and you can find a slightly cheaper option than the Kraken X42 (check the compatibility list), then it makes it a great and worthwhile purchase. It has great performance, is easy to install and aside from concerns about prolonged VRM temperature increases, I would still recommend it over reference graphics coolers.

Huge thanks to NZXT for sending the Kraken G12 and Kraken X42 in for testing and review. 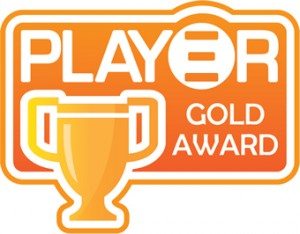 4
So, the Thermaltake SWAFAN 14 and 12 kit performs well in the cooling department, has a decent software package designed around them that is simple and easy to use. It’s fair to say that these are some of the nicest looking and brightest RGB LED fans money can buy. Let's not forget that the new flagship product can change the fan blades to control the direction of the airflow. This also has the added benefit of not having to remove the fan at all, the blade is easily removable, which also removes having to potentially remove radiators making life just a little bit easier.
Go to mobile version
%d bloggers like this: