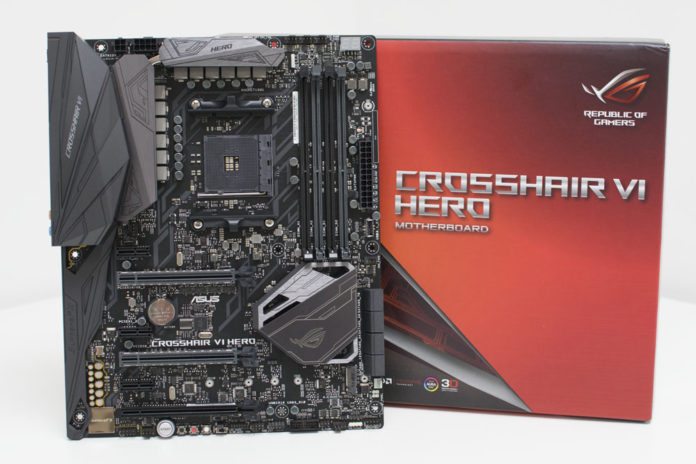 The AMD Ryzen CPU hype has been going absolutely crazy over the last couple of weeks and now that the Ryzen 7 range of CPUs has finally been announced and put up for pre-order, I felt it would be a great time to take a look at one of the top boards on the AMD AM4 X370 platform/chipset; the ASUS ROG Crosshair VI Hero!

Taking an overall look at the Crosshair VI Hero, the basis of the board and the layout is very similar to the Z270 Maximus IX Hero (Intel), which if you think about it, it’s pretty obvious that they would share similarities given they have the same namesake. The Crosshair VI Hero features 2 x PCIe 3.0 x 16 lanes meaning it support for multi-GPU configurations for both NVIDIA (SLI) and AMD (Crossfire). These lanes run in x8/x8 with 2 x graphics cards and x16 (obviously) with a single card. 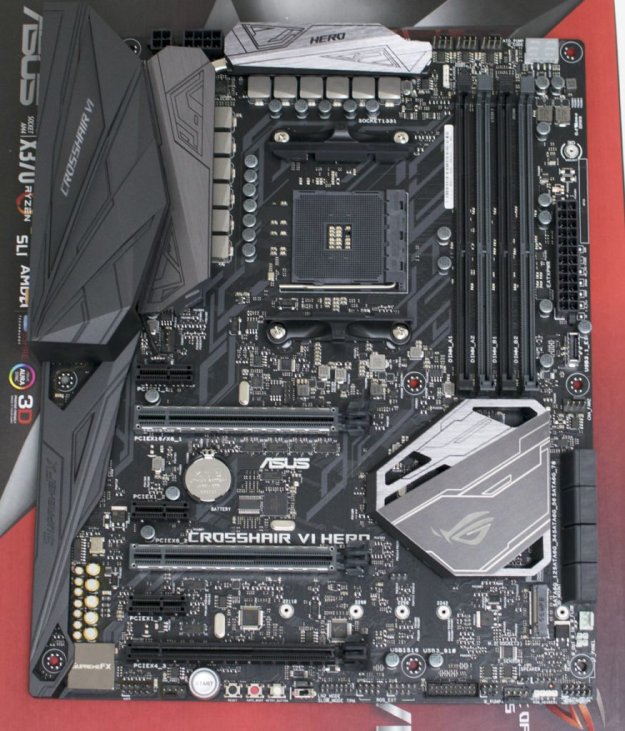 It’s very obvious to see that this particular AMD X370 motherboard is for performance computing and is an obvious choice for overclockers, including those who like to take their hardware on extreme cooling methods. The reason I say this, ASUS ROG have included a digital 10 power phase design which features Texas Instruments NexFET MOSFETs and a Digi+ PWM controller; perfect for maximum power delivery and ultimate stability when overclocking.

The socket itself is AM4, but it also features support (with all AM4 boards) for the incoming AMD 7th gen Bristol Ridge APU chips; basically AM4 will be the new socket for AMDs current processor plan meaning the boards will have support for both chip types. 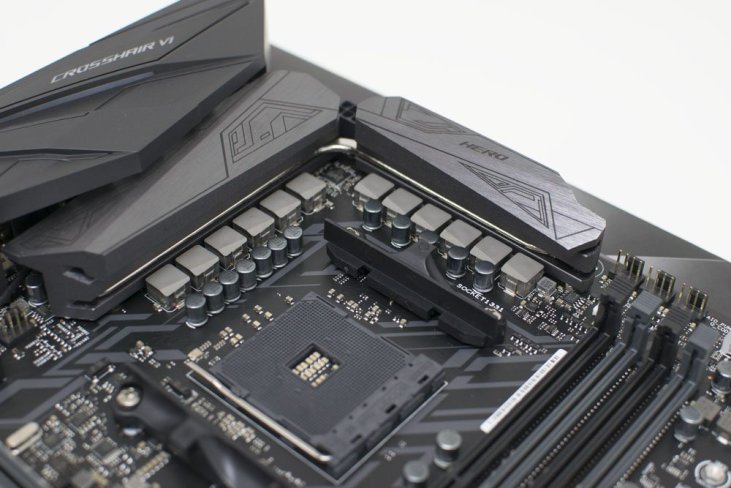 Like the Intel motherboards from ASUS ROG of late, the top 2 x PCIe x16 slots feature metal shielding; ASUS ROG officially calls this ‘safeslot’. It’s a great concept as it strengthens the slot and makes damage less likely to happen, but to me, it makes the overall aesthetic of the board better! 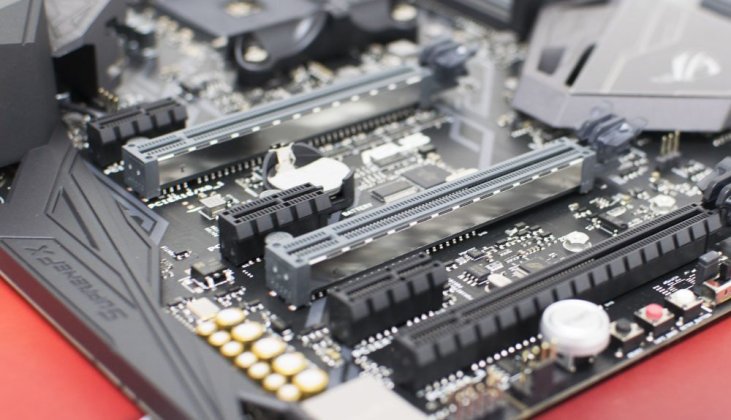 Being a full sized ATX motherboard, we have 4 x DIMM slots which support up to a maximum of 64GB of DDR4 in total. Officially the Crosshair VI Hero motherboard supports DDR4 up to speeds of 3200MHz OC, but I envisage that in capable hands, those frequencies could be surpassed; an easy challenge that I’ll happily accept!

Next to the 24pin ATX power input, you will find voltage checkpoints which allow users to solder on v-checkpoints for monitoring accurate voltages in real time with the use of a digital multi-meter. This is very handy for extreme overclocking and I’m sure the extreme community will be happy about this inclusion. 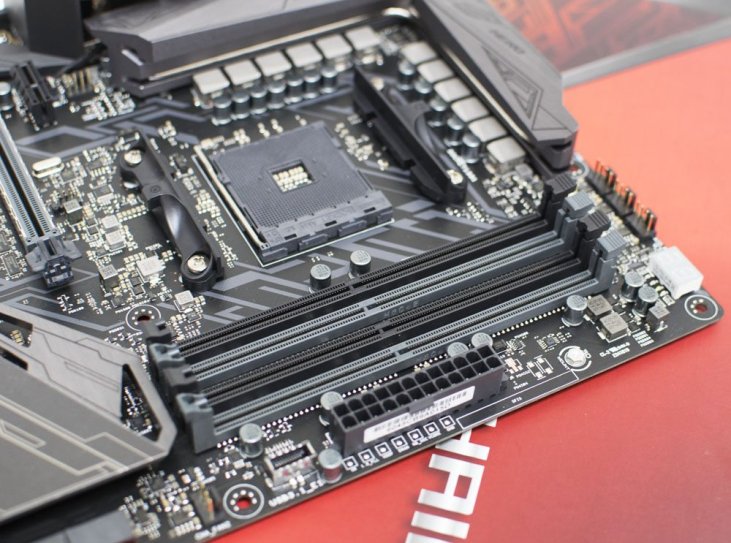 The ROG Crosshair VI Hero features 8 x SATA3 ports which support RAID 0, 1, 5 and 10 arrays. There is a single M.2 slot which runs in x4 mode and doesn’t hinder the SATA ports on board; you won’t find U2 on this board unfortunately.

One of the biggest selling points of the Crosshair VI Hero X370 motherboard is it has support for both AM4 and AM3 compatible coolers. This means users with AM3 compatible CPU coolers aren’t left around waiting for AM4 upgrade kits to become available. This also applies to extreme overclockers as AM3 supported CPU pots will fit this board which not only saves cost (socket kits for pots cost a fortune), but it saves time too allowing you to chase those records! 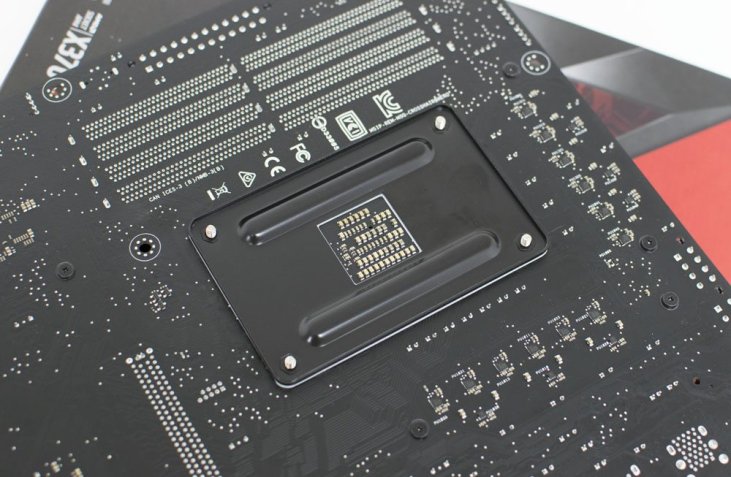 Ryzen is here folks and if you’re looking for one of the best, most feature packed and RGB enabled AM4 motherboards on the market, you can pick up the ASUS ROG Crosshair VI Hero X370 motherboard for £249.99 at launch! Get your pre-orders in now, before stocks run out as Ryzen is hot, HOT I TELL YOU!

Is this the AM4 motherboard you intend to buy with your new AMD Ryzen 7 processor, or do you intend to purchase a different one? Either way, the ROG Crosshair VI Hero is a ton of quality and it’s easy to see why ROG are as popular as they are.