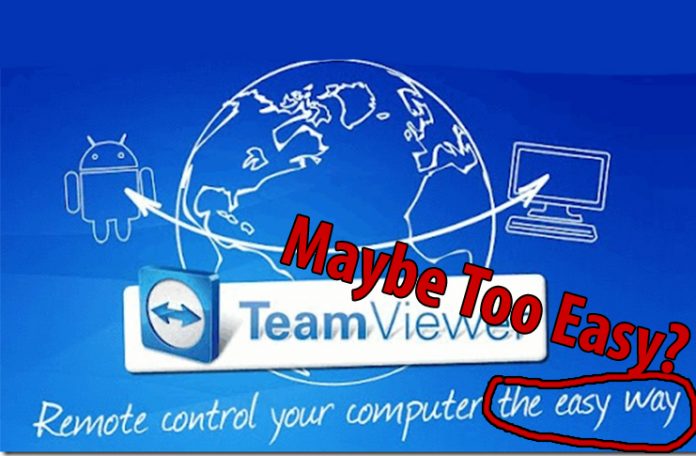 Use Teamviewer or still have it installed?

Well you might want to quickly get rid of it, or enable 2 step authentication. Social media and reports from various users and tech sites have been reporting that the popular remote access program Teamviewer which is used by thousands of users as an easy way to access other computers, and help fix issues has been hacked.

The software which has over 20 million connected devices seems to no long be safe. Multiple users have reported coming back to the computer, on which Teamviewer has been running, to find their bank accounts and PayPal has been wiped clean.

Reddit user Jekerdud wrote “I woke up to the splash that says “thanks for playing fair,” since I use the free version…” “Checked my bank account and 2 one-year amazon prime subs were bought.”

It seems that somehow the attackers are able to bypass the password that Teamviewer gives you, and then simply go on your banking or PayPal account, and use the information to buy non-refundable items and transactions.

I personally have been attacked though Teamviewer around a week ago, the attackers logged onto my computer, and tried to go on to my PayPal. However luckily I never save passwords in the browser.

According to Teamviewer on their official Twitter, they say they have not in fact had any security breach, however with the sheer amount of reports coming in. This is hard to believe.

After contacting Teamviewer, we revived their official PR statement in which TeamViewer address the comments as such.

“TeamViewer is appalled by any criminal activity; however, the source of the problem, according to our research, is careless use, not a potential security breach on TeamViewer’s side.”

“There is no evidence to suggest that TeamViewer has been hacked. Neither do we have any information that would suggest that there is a security hole in TeamViewer.”

As always they suggest that users:

Although TeamViewer does say that there is no security breach, I still suggest users to be on the lookout, and if they wish to continue using TeamViewer no make sure they enable two-factor authentication.

As I have personally been affected by this and that I know my own online habits, and can tell you that every website and bit of software I use has a different password, which is mostly randomly generated.

But then again with a number of leaks these days, from Adobe, Twitter, most recently LinkedIn, it’s not hard to find emails, which if you use an account on TeamViewer could lead straight to you.

Paul Davies - Oct 2, 2018 0
With an approximate 1.2 billion people playing games around the world and 700 million of those opting for online play, game makers across the globe constantly have to provide apt protection from something called a ‘DDoS Attack.’
Go to mobile version
%d bloggers like this: