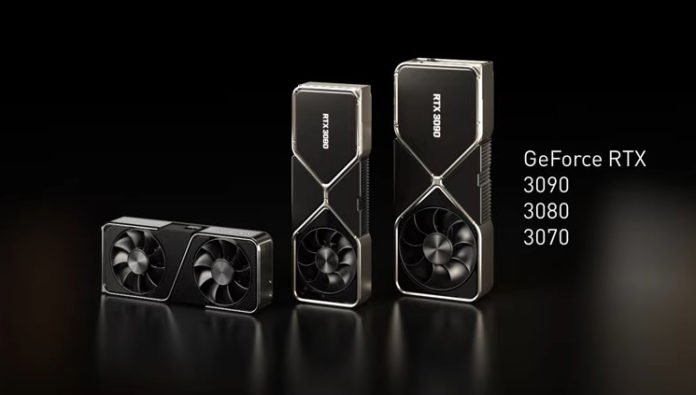 The Nvidia RTX 3070, RTX 3080 and RTX 3090 are now official. In front of around 250,000 Twitch viewers, CEO Jensen Huang made the announcement in a short and sweet online event lasting just 40 minutes. We’ll be going through the three cards and the messaging in the order they were announced. But first, we need to talk about the cooler.

Before talking about the GPUs themselves, we have a new cooler design on our hands for the FE cards. Nvidia actually teased this last week, in a video titled “The Remarkable Art & Science of Modern Graphics Card Design”. The new design acknowledges that air in a case is usually being blown from the lower front to the upper rear, and looks to work with that air movement. The resulting airflow should have less changes of direction, making it faster and quieter.

Making space for this “flow-through” is no picnic, and Nvidia’s engineers have gone all out on fitting a huge VRM and memory setup onto a tiny PCB. Considering the Ampere cards are using bulky GDDR-type memory, rather than HBM, this is quite an achievement. Nvidia is claiming that on the RTX 3080, this cooler is 3x quieter and 20C cooler than the 2080 FE cooler would be. Put another way, this is an extra 90W of cooling capacity.

We do have one minor complaint. Nvidia claims this is the first-ever “flow-through” design. While it’s the first we know of that places a fan on the back of the card in a “pull” configuration, it’s not the first to have this kind of general heatsink design. We can point to the XFX R9 Fury Triple Dissipation as an older card that allowed air to flow straight through the heatsink, much as this new cooler does. XFX may themselves not be the first, but they certainly predate Ampere by a good four years.

First to be announced today is the Nvidia RTX 3080. The pitch is simple: the same price as the RTX 2080 back in 2018, but up to twice the performance. Nvidia is calling this “the biggest generational leap we’ve ever had”. 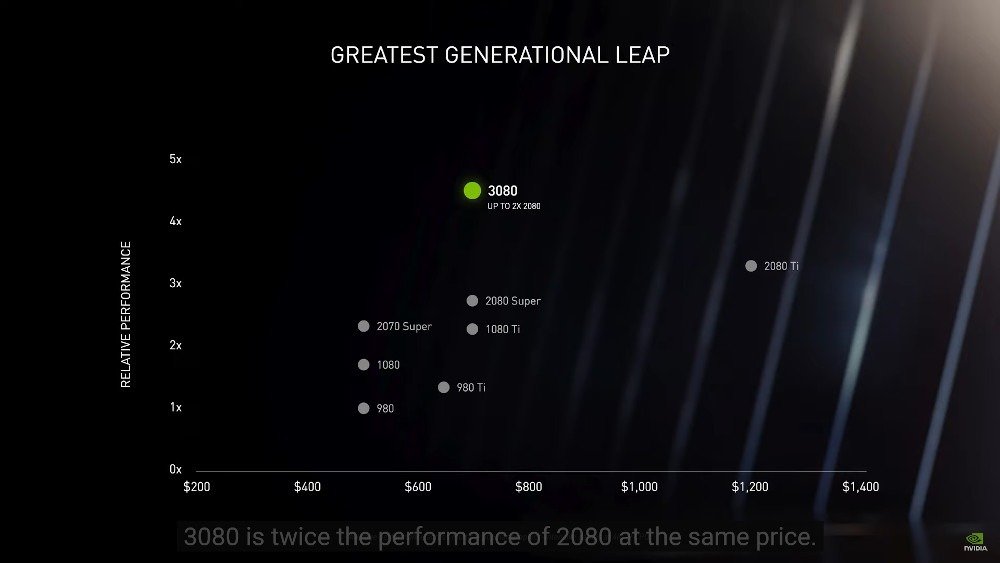 This needs to be taken alongside the price: an MSRP of just $699. GPU prices are certainly creeping up these days, but Nvidia has restrained increases this generation and is claiming an awful lot more performance at the same price point. This card can also be had the soonest, with availability from the 17th of September. 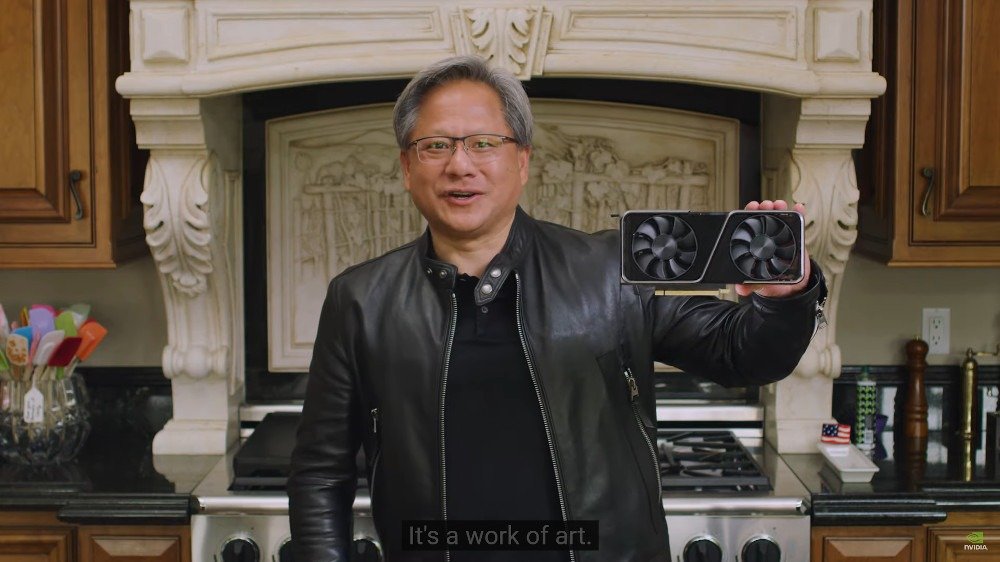 Second up today is the RTX 3070. This is the traditional price to performance offering, and maybe I’ve been social distancing for too long but I think it’s quite cute. The cooler looks like a more traditional design with dual axial fans. However, there is still a small PCB and plenty of space for flow-through. 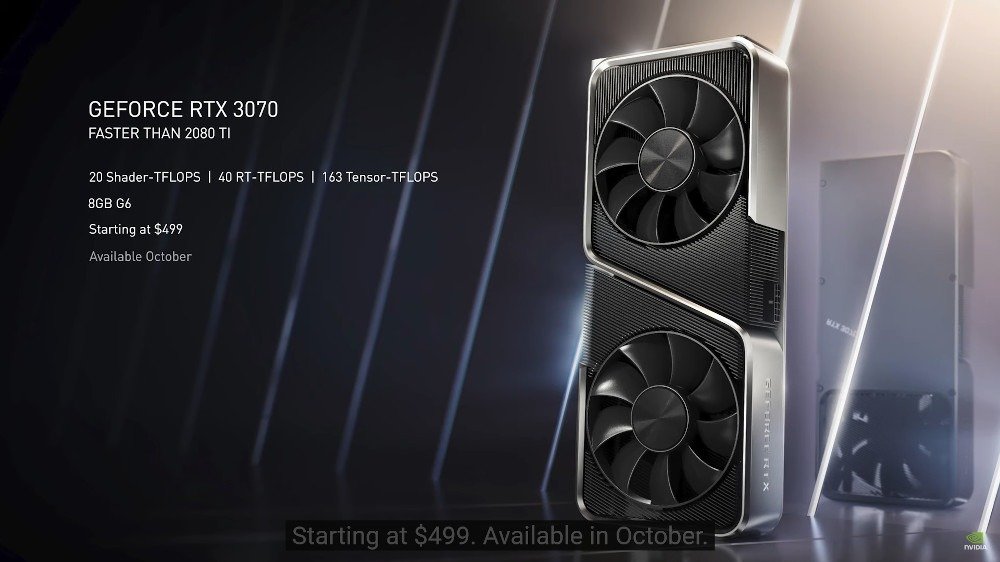 Finally, what’s being positioned as a new Titan. Nvidia’s Titan series has been around since 2013 and has been popular among those seeking the ultimate in performance. However, aside from eye-watering prices, users have complained that the naming is getting confusing and lamented a lack of third-party coolers. Availability has also been limited. This generation, Nvidia has once again baked a huge, expensive GPU – but this time it’s joining the mainstream series as the RTX 3090.

Described as a “ferocious beast” and “BFGPU” by Nvidia, the message from the RTX 3090 is clear: performance first, above all else. The card shown off today takes the same cooler design as the RTX 3080 but makes it much bigger. The result, which Jensen Huang calls a “silencer” as if this is a high-power rifle, is three slots thick. Not only that, but the RTX 3090 cooler is wider with larger fans than the RTX 3070 or 3080. This one is claimed to be 10x quieter and 30C cooler than a Titan RTX cooler would be. 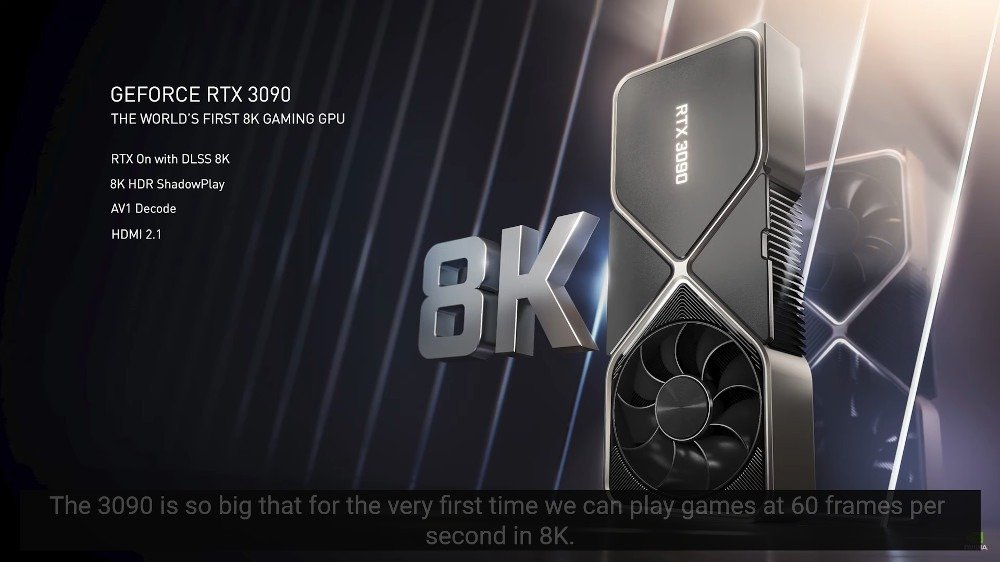 The ultimate pitch for the RTX 3090 is that it’s possible to game at 8K (with DLSS) 60fps – helped by the availability of better monitors. Very few people have 8K monitors right now, so showing demo footage wouldn’t work. Instead, Nvidia underlined this by shipping in a group of gamers to react to the image quality for the camera. No surprise, they were suitably impressed.

The guys over at UL Benchmark, the creators of the 3D Mark software, have also told us that their 3D Mark NVIDIA DLSS Feature test will also be getting an update to use the latest version of DLSS including Ultra Performance mode for accelerating performance at 8K.

Tim Mammatt - Nov 21, 2017 0
Nostalgia junkies, rejoice. A revamped version of the classic Nokia 3310 has recently been released by the Finnish phone manufacturer.
Go to mobile version
%d bloggers like this: