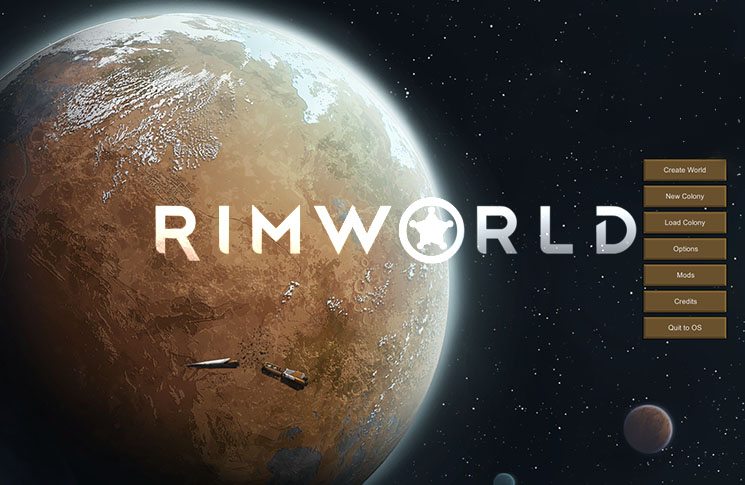 Intro:
Created by Tynan Sylvester and Ludeon Studios. RimWorld follows three survivors from a crashed space liner as they build a colony on a frontier world at the rim of the galaxy. With 9498 people pledged $268,132 on Kickstarter and 65,000+ sold to date, this top down simulation has a lot going for it.
Inspired by the space western vibe of Firefly, the deep simulation of Dwarf Fortress, and the epic scale of Dune and Warhammer 40,000.
Build colonies in biomes ranging from desert to jungle to tundra, each with unique flora and fauna. Manage and develop colonists with unique backstories, traits, and skills. Manage their moods, needs and thoughts. Engage in deeply-simulated small-team gunplay, fight pirate raiders, hostile tribes, rampaging animals and ancient killing machines. Discover a new generated world each time you play. Learn to play this deep game smoothly and naturally with the intelligent, reactive AI tutor.
For Windows, Mac, Linux. The game is distributed by DRM-free download.

Gameplay:
This game is still in Alpha (0.9.727 at time of review) but let this put you off, this game is huge and the only reason it is still in Alpha is they want to get it right. With updates and patches being released making huge changes that players have asked for and been talking about in the Forums. Modding isn’t just supported its encouraged and it even has changed the game with the dev team put some into the game.
RimWorld uses an AI Storyteller (modelled after the AI Director from Left 4 Dead) who analyses your situation and decides which event she thinks will make the best story. There are several storytellers to choose from:

When you start a new world your colonists are not professional settlers – they’re survivors from a crashed passenger liner. They’ll be accountants, homemakers, journalists, cooks, nobles, urchins, and soldiers. So pick your starting 3 wisely to cover the basic survival skills.
The only problem this game has is the huge learning curve, from loading a world and picking a good location to start to making sure your starting characters have the basics to survive. Then once your in the world the unique controls, zones, and priorities to learn. Trust me though, it’s worth it! Once you can go from your starting 3 with a hole in a rock to 10 colonists with their own styles, jobs and rooms and you decide to finish your ship to get of this hunk of rock knowing you cant return.

Here is a quick look at how to get started in Rimworld with some tips to help you get started.

Graphics and Audio:
As this game is still alpha graphics and audio are still improving but even with that it still looks beautiful, from the change in seasons to the biomes ranging from desert to jungle to tundra, each with unique flora and fauna. Simple but varied player/NPC models keep the game flowing. The audio is crisp and to the point, with great work still being added. Finally you have ever watched Firefly (which I suggest you do HIGHLY) the style echoes the shows and its outer planets.

Final Verdict:
So far I already have over 100 hours playing and have only just started. With a great game engine and amazing AI this game excels.  From the epic battles to the crazy turtle attacking you combat has strategy. The way everyone designs a unique base and has different priorities make the game full of possibility. Even with everything still to come in Alpha and Beta this game feels like its could do anything.
I must say though do have a few problems with the game like its steep learning curve (maybe a training map that goes over the basics would help). Alpha build = hotfixes and not final product (not a problem but not everyone’s cup of tea). Steam Green light but no set date for steam support.

As a whole yes I love this game, in fact its my new favourite game so if your looking to get it or played it? Let me know how you feel on here and in the Facebook group, or on our Facebook page.

I give Rimworld a 4.5/5 due of the steep learning curve. With everything they have done right so far if I could do 4.9 I would have!
“Even with everything still to come in Alpha and Beta this game feels like its could do anything.”
So remember keep calm and stay shiny.

Melissa Hadfield - Oct 17, 2016 1
Seraph tries to take the danger out of doing a cartwheel while throwing in real firepower to hurt other people.
Go to mobile version
%d bloggers like this: