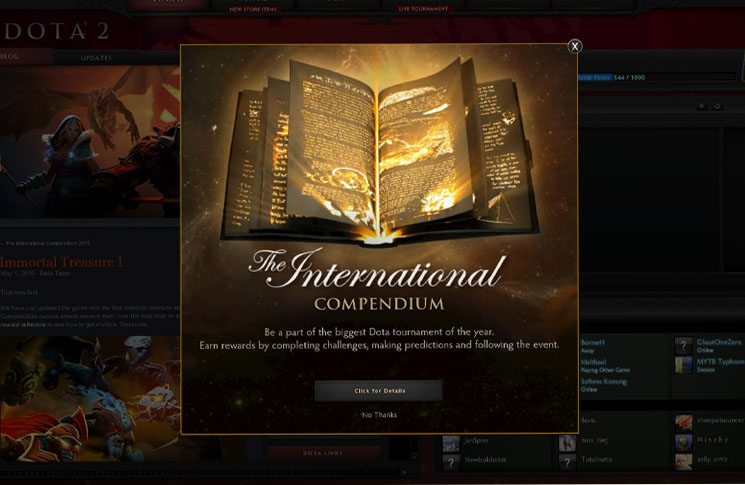 “We hate the gift restrictions as much as you do. We thought it’d be helpful to explain to you why they exist so that you can have a better view into the challenges surrounding fraud. Throughout this post we’ll talk about gifting compendiums to friends, but this applies in general to all items purchased from the store.
Here’s the problem: Bad guys buy compendiums with stolen credit cards, and then resell them to other players at a discount. It can take days to determine that the cards were stolen, and that a fraudulent item had been added to the economy. We can’t effectively punish the fraudsters, because they’re not really traceable – they commit the fraud on new or stolen accounts, never on their own accounts. In addition, these side markets make it very easy for people to get scammed.”

“When this started happening in 2013, we decided that the impact fraud was having on players and the economy wasn’t big enough compared to the drawbacks of imposing restrictions on everyone. Unfortunately, like all scams that make money, it ballooned rapidly. The moment a method of fraud becomes profitable, it will explode in scope until we can find a way to address it. In 2014, the percentage of compendium purchases that turned out to be fraudulent became very significant and we also saw a massive growth in scam-related support requests from users that didn’t receive their items or had their accounts stolen. Additionally, credit card fraud can become a big problem for us because if our fraud rates climb too high, we will no longer be allowed to accept credit card payments at all.

So, we added the time-based trade restriction to allow time to detect and limit the impact that the fraudulent activity has. We believe it actually hurts sales when we put restrictions on our players, because it means it’s harder to buy a gift for your friend, for example. We hated doing it, but we didn’t have a better solution. We are continuously exploring different methods to solve these problems, because we want to be able to stop fraud without affecting legitimate users.”

I know a lot of people are being affected by the growing wave of fraudsters and still feeling the sore aftermath once they get punished, while the fraudster/s have the money and are laughing. I think this is a good idea by Valve to try and control the ease of such fraud and we will see how well it works.

Do you think Places like G2A and other game sale sites should make the CD code sales stricter? Let me know how feel, on here and in the Facebook group, or on our Facebook page.

Play3r - Apr 20, 2015 0
Valve have decided that users need to spend $5 on Steam or have limited things to do with their account, as a new security measure to prevent botting.
Go to mobile version
%d bloggers like this: