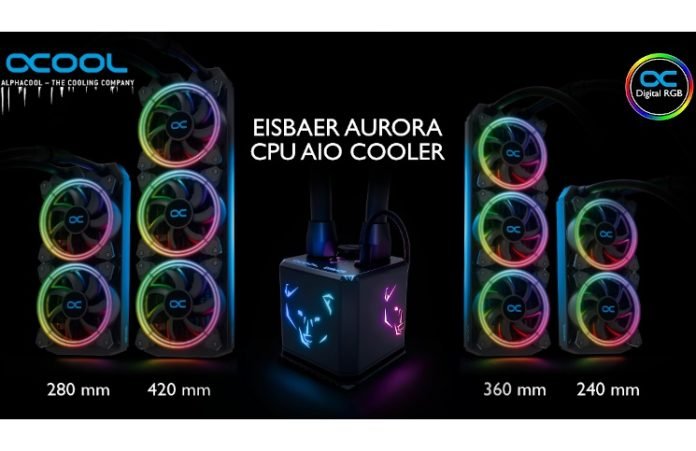 Alphacool have announced their new Eisbaer Aurora series of expandable all-in-one liquid coolers. As well as addressable RGB, the new series has multiple tweaks and optimisations for the latest CPUs including AMD Ryzen. Previously teased at Computex 2019, the final product features a number of improvements which we’ll have a more detailed look at through the article. The new coolers are available in 240mm, 280mm, 360mm and 420mm radiator sizes.

The Alphacool Eisbaer series of all-in-one watercoolers has gathered attention for a design that aims to be the ‘best of both worlds’. Using standard G1/4″ fittings and a refillable reservoir as part of the pump and block assembly, the Eisbaer retains the flexibility offered by a fully custom water loop with the convinience of an all-in-one unit. Bringing this point home, Alphacool have even offered the “Eisbaer Solo” block unit to use in custom loops.

The most important improvement the Alphacool Eisbaer Aurora series brings is without a doubt RGB. The new products benefit from addressable RGB LEDs with a standard 5V addressable RGB connection. These illuminate an Eisbaer (pronounced “Ice Bear” and a reference to Eisbär, the german word for polar bear) design on the block unit and, in a change from the version we saw at Computex last year, the fans now have aRGB rings.

Alphacool have also made some meaningful performance tweaks. The new, redesigned DC-LT pump is claimed to be almost 10% more powerful at a reduced noise level. Weak pumps are a common criticism of all-in-one units, so this is welcome news. Alphacool have also optimised the Eisbaer Aurora series for AMD Ryzen by tweaking the base. The new copper base has internal fins above more of the IHS, giving more direct cooling to AMD’s off-centre chiplets. This should also benefit the large dies on Intel’s Core i9 processors.

A feature we’re happy to see kept from previous Alphacool Eisbaer products is the copper radiators. Another common criticism of other all-in-one liquid coolers is the typical use of cheaper aluminium radiators, which need strong anti-corrosive additives. By using copper for everything but the brass thread inserts, Alphacool maximise performance and put paid to any concerns about corrosion.

Finally, Alphacool have given the Eisbaer Aurora new tubes and fittings from their enterprise solutions range. The new tubes are made from strong TPV rubber, removing the need for anti-kink coils. The new fittings are high quality and look very sleek while still using the standard G1/4″ threads underneath. Alphacool are keen to stress that the sleeker quick release connectors are still 100% compatible with all their existing Eisbaer Ready products. This means you can still add a prefilled radiator from the existing “Eisbaer Ready” range, or easily include an Eiswolf GPU watercooler in the same loop.

The Alphacool Eisbaer Aurora series is available now from Overclockers UK, with international shipping available to destinations including the US and Canada. The full range along with Eisbaer Ready accessories and upgrades is also available internationally from Alphacool directly.  The product line is also listed by modmymods.com and Aquatuning US.