It’s a familiar pitch: an ATX mid tower case with tempered glass, a solid front and lots of RGB. We’ve seen them before and we’ll see them again – but that doesn’t mean there’s no room to get better. An evolution rather than a revolution, SilentiumPC’s Armis AR6X and AR6Q series cases represent the European company’s latest refinement of a familiar design.

SilentiumPC were established in 2007 with the goal of providing high-quality silent PC cases, power supplies and cooling solutions that simply get the job done without breaking the bank. Since then the company has grown, and in 2018 rolled out a new, modern look but has remained focused on cost effectiveness, with a small and enthusiastic team.

The Armis AR6 series continue in this spirit. The three similar cases re-use the proven Natissis internal structure introduced recently with the mesh-fronted Regnum RG6V series. This saves on tooling costs without compromising quality – there’s that cost effectiveness. What differentiates the new cases is their front panel and included accessories.

Compared to the AR5 series, the Armis AR6X and AR6Q jump out for the extra room at the top of the case. The older design takes the common route of supporting top-mounted watercooling radiators, but only by overlapping the motherboard. This limits RAM height and can theoretically hurt VRM cooling with an airflow-free “dead zone”. The Armis AR6X and Armis AR6Q sort this out with space for standard 25mm fans and a radiator up to 27mm thick without overlapping the motherboard.

All of the Armis AR6 series models support up to 2x140mm or 3x120mm fans in the front, 2x120mm or 2x140mm at the top and 1x120mm at the rear. SilentiumPC have also included mounts for 2x120mm fans on top of the PSU shroud, though they caution this can be tricky to build around and obstructs the lowest PCIe slots. All of these locations support the corresponding sizes for watercooling radiators.

The clearance for GPUs is huge at 360mm, which should fit any GPU length-wise. PSU length is a reasonable 175mm, rising to 275mm if the 3.5″ spaces are unused. In terms of CPU cooler height 162mm is available, which fits SilentiumPC’s own air coolers like the Fortis 3 HE1425. Larger coolers like the Noctua NH-U14S won’t fit, but AIO watercoolers will with a lot of flexibility. 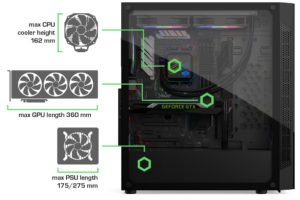 In terms of storage, the Armis AR6X and AR6Q series cases offer space for 2×2.5″ drives and either 2×3.5″ or a further 2×2.5″ drives. Though modest, this is typical for cases of this kind. Most users will only start out with at most one 3.5″ drive so two bays is still room to upgrade. 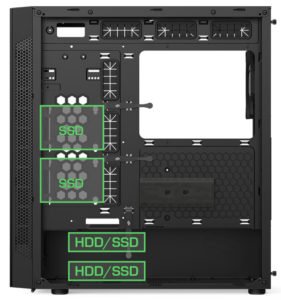 Wrapping up the common features all of the Armis AR6 series cases have a tempered glass side panel, PSU shroud running the length of the case to hide cables, cable management straps and tie points in the generous 28-29mm deep space behind the motherboard tray, and dust filters throughout. Oh, and the usual rubber grommets for the cable holes. All the important boxes are checked here.

The Armis AR6X EVO TG ARGB is the flagship. A tempered glass front panel is present in addition to the tempered glass side panel, but the real highlight is what the case comes with. SilentiumPC include five of their 120mm fans, four of which include addressable RGB LEDs. On top of this, SilentiumPC’s Aurora Sync EVO PWM ARGB controller is included. Not to be confused with Asus Aura Sync, this provides control for up to six 4-pin PWM or 3-pin DC fans and six addressable RGB devices from a single input for each. The fans and RGB controller here represent a huge value add on paper, and are something to consider carefully against other cases in the price range. SilentiumPC have given us an MSRP of €83 including VAT/taxes. 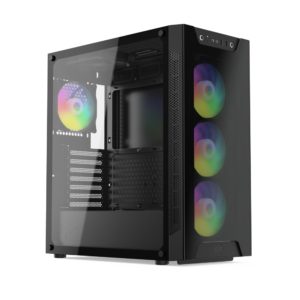 You can read more about the Armis AR6X EVO TG ARGB on the SilentiumPC website.

The Armis AR6X TG RGB is the conventional RGB counterpart to the EVO TG ARGB. The four RGB fans are conventional 12V RGB rather than addressable, and the controller is an Aurora Sync PWM RGB controller without the “EVO”, reflecting the traditional rather than digital addressable nature. Otherwise this is the same as its fellow AR6X and has the same MSRP of €83 including VAT/taxes. 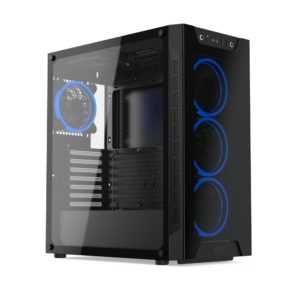 You can read more about the Armis AR6X TG RGB on the SilentiumPC website.

The Armis AR6Q EVO TG ARGB can be seen as a reduced cost alternative. Gone is the tempered glass front panel, in favour of a matte black front with an addressable RGB stripe. The included fans are cut down from five to just two, one of which has addressable RGB. Finally the Aurora controller is replaced with a simple one to five splitter on both the fans and RGB. This means all five fans will draw power from the single motherboard header, so double-check your current ratings (motherboard headers can usually do at least 1A and some are rated for up to 3A).

SilentiumPC do still include a simple Nano-Reset RGB Controller to make sure their users won’t be short of rainbows. The Nano-Reset plugs into a case switch (such as the reset switch) which can then be used to cycle through a variety of pre-baked effects. The Armis AR6Q EVO TG ARGB has an MSRP of €65. 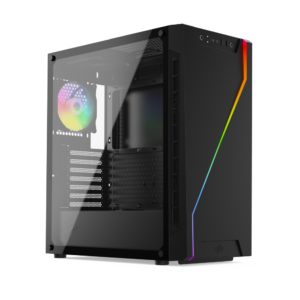 You can read more about the Armis AR6Q EVO TG ARGB on the SilentiumPC website.

The Armis AR6X and AR6Q series cases haven’t shown up on english-language etailers just yet at time of writing, but Amazon UK usually carry SilentiumPC’s cases. Here’s a search link that should find you the cases once they’re available.