ASRock have shown off their motherboards for Intel Comet Lake desktop chips, using 400 series chipsets and the LGA1200 socket. Key features include PCIe 4.0 support on selected models, VRMs ASRock call “rock-solid”, and ASRock “Base Frequency Boost”. With over 30 models available, ASRock hope to have the right part to meet any needs.

The extensive LGA1200 range includes two flagships – the Z490 Taichi and Z490 PG Velocita. The pitch for both of these is to “performance and overclocking enthusiasts, and extreme gamers”. In addition, the Z490 Steel Legend, Pro and Phantom Gaming series’ provide Z-series performance at a lower price. ASRock are also addressing the SFF market with “comprehensive mini-ITX options” already announced. Finally, there are H470 and B460 options for the mainstream and H410 for entry-level. 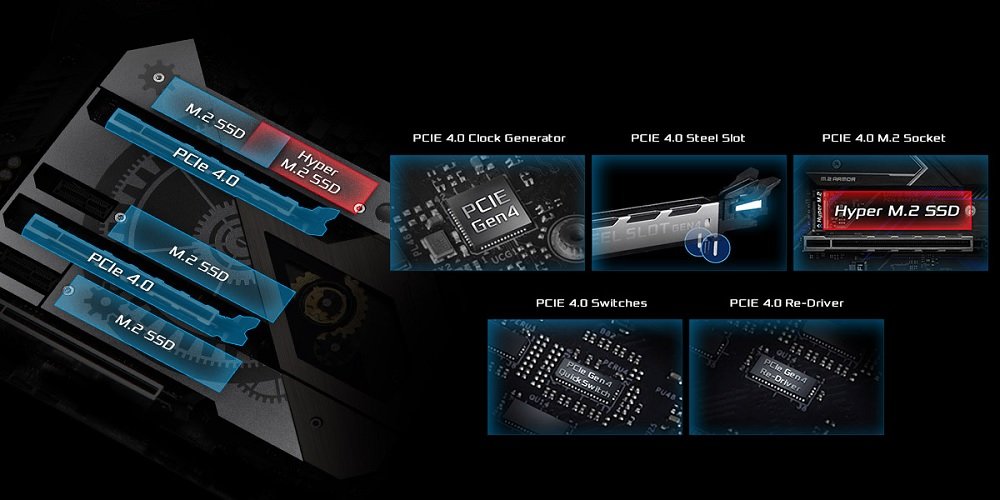 Although Intel’s 10th gen Comet Lake chips lack PCIe 4.0, it’s expected to touch down with next-gen Rocket Lake chips on the same socket. Taking the initiative, ASRock are future-proofing their top boards. The Z490 Taichi, PG Velocita, Steel Legend and Extreme4 have the hardware to support PCIe 4.0, as does the H470 Steel Legend.

Interestingly, ASRock highlight an M.2 slot that’s ready for PCIe 4.0 with Rocket Lake. New CPUs won’t make the PCIe lanes from the chipset upgrade themselves. This means that ASRock are taking advantage of the ability to split up CPU lanes – 8 to the top GPU slot, 4 to the second GPU slot and 4 to the “Hyper M.2” slot.

Another feature ASRock have chosen to highlight is the VRMs on their top-end boards. 95% efficiency is claimed, using “DR.MOS” (these days normally called power stages) and 2oz copper PCBs. Despite the lofty efficiency claims, ASRock are building in fans that kick in if things get too toasty. 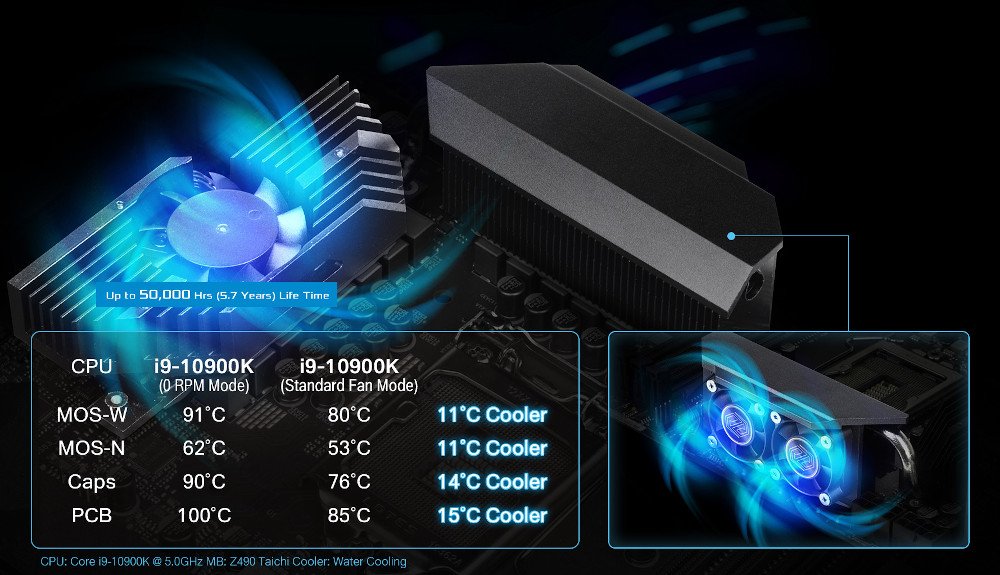 This is surprising at first – surely it’s the lower-end boards, with less efficient VRMs, that need fans? ASRock seem to be reasoning that a lower-end board’s likely pair is a less demanding chip like an i5-10600K. Plus, cheaper air cooling provides more cooling around the socket. A user who is going to really cook their VRMs is doing it by buying an i9-10900K, watercooling it, and cranking a heavy overclock. Those users will likely get a top-end board. By including fans, ASRock are making sure their VRMs are ready for the most demanding watercooled setups.

It’s worth noting that VRM components can usually handle even 125C external temperatures. Having fans doesn’t mean you’d overheat without them. However, what it does do is reduce wear. Capacitors in particular get less effective with use, and this is worse at high temperatures. Therefore reducing temperatures slows the degradation, and keeps everything working well for longer.

One feature that has certainly raised eyebrows is ASRock’s “Base Frequency Boost”. To quote directly from the press release;

“Featured on many ASRock 400-series motherboards, the Base Frequency Boost (BFB) technology increases the base frequency of non-K CPUs beyond the default standard, allowing users to enjoy an immediate performance uplift even on non-Z series motherboards”

Intel’s specifications remain unchanged: only K series CPUs are unlocked for OC, and only on Z series chipsets. What BFB could be doing is taking advantage of the space between the base frequency and all-core boost. For example, a Core i7-10700 has a base frequency of only 2.9GHz to stay within the 65W TDP but an all-core boost spec of a whopping 4.6GHz. Just by increasing power limits, there’s up to an extra 1.7GHz of frequency to be had under sustained load. ASRock’s BFB is likely just a more accessible way to do this.

ASRock LGA1200 motherboards for Comet Lake have started showing up for pre-orders, including on Newegg in the US and Overclockers UK in the UK. According to Newegg, the availability date is the 20th of May.

Key prices are as follows: