HP are debuting a new look and feel for their OMEN gaming lineup and as part of it they’re launching the OMEN 25L and 30L. These small gaming PCs come in, appropriately enough, at 25 and 30 litres respectively. Despite the size they’re powerful on paper, slated for CPUs up to the recently-announced Intel i9-10900K, or the Ryzen 9 3900 on the AMD side. GPUs are available up to the AMD Radeon 5700XT or Nvidia GeForce RTX 2080 Super.

As well as the new look, HP are welcoming Cooler Master to their systems. HP OMEN 25L and 35L gaming desktops will have 92mm-class air or 120mm-class liquid options from Cooler Master. CM are also providing power supplies up to 750W with 80+ Platinum efficiency.

HP are pitching these new desktops as perfect to go with their new OMEN 27I gaming display.

HP OMEN’s new look combines a consistent neutral black with RGB. The chassis, motherboard, gpu, power supply and even fans are all black. Even the SSD option is a WD Black NVMe. The HyperX memory also comes in black, but topped with RGB LEDs. These should work well – HyperX introduced IR sync back in 2018, which keeps their RGB memory in perfect sync. 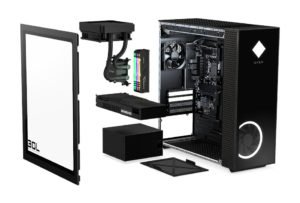 In total there are up to six RGB lighting zones: front logo, front fan, interior lighting, CPU cooler, memory and graphics. HP’s OMEN Command Centre software provides customisation, along with a host of other features. These include a patented auto-overclocking alogrithm, fan control, and a game launcher.

HP also provide toolless access on the OMEN 25L and 30L, which should make cleaning and upgrades easy. A simple button press releases the tempered glass side panel.

You might be wondering, what’s the difference between the HP OMEN 25L and the 30L?  Well, aside from a more conservative base spec on the 25L, the answer is about 5 litres. The 30L extends the front of the case forwards, opening up a lot of space for vents in the side. This added volume should let the front 120mm fan breathe better.

Full details for the HP OMEN 25L and 30L are available from the OMEN website.

Craig Bartlett - May 31, 2017 0
ASUS today announced that its products won eight Best Choice and 12 d&i (design and innovation) awards at ceremonies held during Computex 2017.
Go to mobile version
%d bloggers like this: