Solid front panel or mesh front panel? It’s a tough question. A solid front panel looks good and can dampen noise, but critics say it restricts airflow. This would make the cooling solution work harder and create more noise to dampen. On the other hand, a mesh front panel lets plenty of air in but also lets all the noise out. Some like the more open look, but others also say it looks, uh, meshy. Sorry. Anyway, the Kolink Balance might just have an answer.

The Balance is the latest case from meme-friendly Hungarian hardware company Kolink. Rather than choose between a solid or mesh front the Balance gives you both at once, with about 1/3rd mesh and 2/3rds solid separated by an obligatory strip of addressable RGB.

Established in 2002 as a maker of cheap mice and keyboards, Kolink have grown since and now sell all across Europe. Kolink’s mission of quality products at competitive prices has even seen them gain a global reach, with many of their products also available from Amazon in the US. 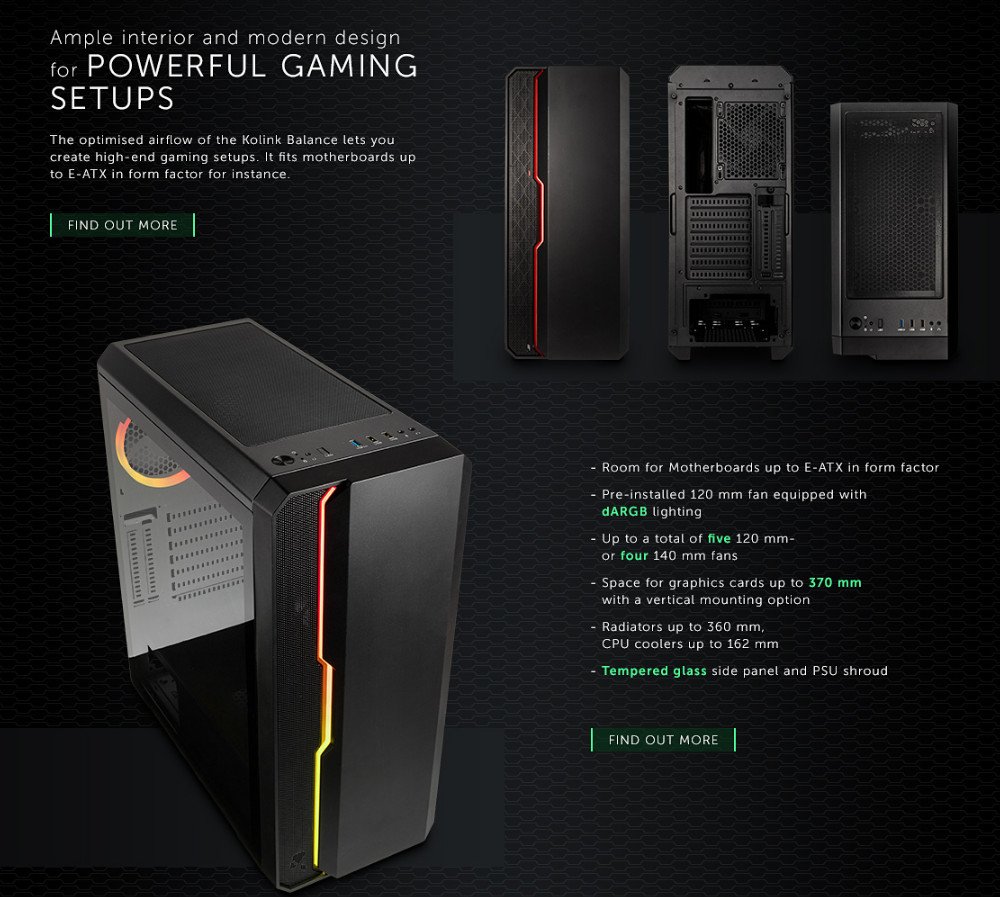 The Kolink Balance is a full ATX mid tower with space for two 3.5″/2.5″ and two 2.5″ drives. However, unlike other cases in the class the Balance makes the most of the space to also support EATX motherboards. GPU support is huge too at up to 370mm, and CPU cooler clearance is a standard 162mm. That’s slightly too tight for the biggest air coolers like the 165mm Noctua NH-D15, but should accommodate 120mm-class air coolers. Fan and radiator support is up to 3x120mm or 2x140mm at the front, 2x120mm or 2x140mm at the top, and 1x120mm at the rear.

In terms of ports, the Kolink Balance has two USB 2.0 ports and a single USB 3.0 port on the case, even though USB 3.0 headers are designed to support two ports. There’s also the usual audio and, handily, an RGB switch.

Aside from the part-mesh front, notable features include a PSU shroud, tempered glass side panel and two brackets for a vertically mounted GPU. From their promotional images it doesn’t seem there would be much breathing room for an air cooled GPU in the vertical position, but the vertical mount could be aesthetically pleasing and would match well with watercooling. To keep the cost competitive, PCIe risers are sold separately.

Included accessories are sparse, but Kolink do include a single 120mm fan with an aRGB ring, preinstalled at the rear position.

The Kolink Balance is priced at £49.99 in the UK and €54.90 in Europe.  It’s available for pre-order from Overclockers UK, and available now in Europe from Caseking.