MSI have detailed their MPG B550 GAMING CARBON WIFI motherboard, one of a host of new socket AM4 offerings. Positioned as MSI’s premium board for the chipset, the feature set looks more like an X-series board. There’s a beefy VRM, great connectivity, and the obligatory RGB. 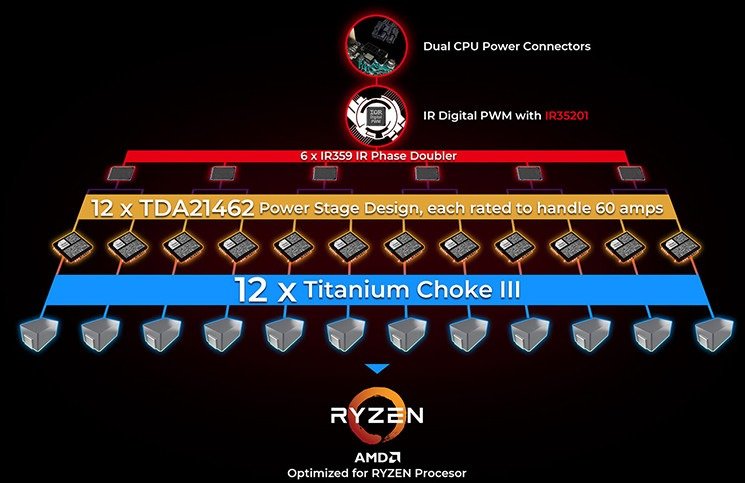 Following the ‘return to honor’ that was the MAG X570 TOMAHAWK, MSI are erring firmly towards overkill. Six IR3599 doublers feed 12 Vcore phases, using TDA21462 60A power stages for top efficiency. Heat dissipation is also addressed, with a huge heatsink connecting to the aluminium IO cover. MSI are also making a point of using a high performance 7W/mK thermal pad between the heatsink and the VRM, with extra heat transfer from the cases of the “Titanium Choke III” chokes. There’s a lot of copper connecting chokes directly to the silicon inside a power stage, so this takes advantage of the connection.

SoC is fed by two phases, presumably controlled directly by the same IR35201 controller as Vcore. There’s no heatpipe, but a large heatsink with fins cut into it cools SoC along with two Vcore phases.

A 6-layer PCB with 2oz copper layers completes the VRM cooling picture, moving heat away through the PCB itself. Finally, on the input side MSI have included an optional extra 4-pin CPU power connector. This isn’t needed for day-to-day operation but is a good idea for aggressive overclocks.

A headline feature of the MPG B550 GAMING CARBON WIFI is the networking. MSI have equipped the board with Wi-Fi 6, using an Intel AX200 card. Alongside this comes 2.5Gbps ethernet – as on their Z490, MSI are using a Realtek chip here.

On the rear IO, we see MSI haven’t skimped on USB ports. There are two 10Gbps USB 3.2 Gen2 ports, one of which comes with a type-C connector, and two 5Gbps USB 3.2 Gen1. These are all supplied directly from the processor, ensuring full bandwidth for demanding peripherals. On top of these, there’s a full four USB 2.0 ports supplied by the chipset. Keyboards, mice, headsets and many phones are among the peripherals that only need USB 2.0 ports, and this makes sure the faster ports will be left available. There’s even a PS/2 keyboard/mouse port, useful both for legacy operating systems and those who value interrupts over polling. Finally we find a bios flash button – always nice to have – and display outputs for use with upcoming APUs. 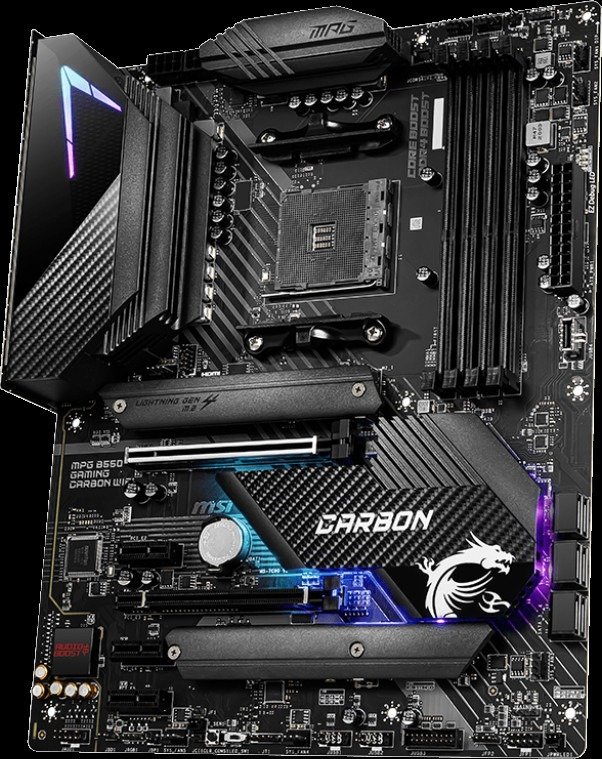 Internally, MSI provide the usual six SATA ports along with two M.2 slots for NVMe-based SSDs. The top M.2 slot provides PCIe 4.0 speeds, as does the PCIe x16 slot – though the second full length PCIe slot is 3.0 x4 from the chipset. There’s a header for two USB 3.2 Gen1 Type-A ports on a case, plus a Type-C header and two USB 2.0 headers.

This being a premium board, MSI have provided plenty of RGB options. To start off, there are RGB LEDs in the I/O cover and around the chipset heatsink. Moreover, MSI have included a total of four RGB headers. There are two headers for conventional non-addressable RGB, a 5V aRGB header that MSI label “JRAINBOW”, and a Corsair-specific “JCORSAIR” addressable RGB header.

B550 motherboards are available now, though supply is short. The MSI MPG B550 GAMING CARBON WIFI is listed for £214.99 at Overclockers UK and $219.99 at Newegg in the US. As always, UK prices include VAT whereas US list prices exclude sales tax.

Craig Bartlett - Jul 31, 2017 0
ASUS Republic of Gamers Announces Strix RX Vega64 graphics cards which are to be available from 14th August 2017 with other models available soon after.
Go to mobile version
%d bloggers like this: