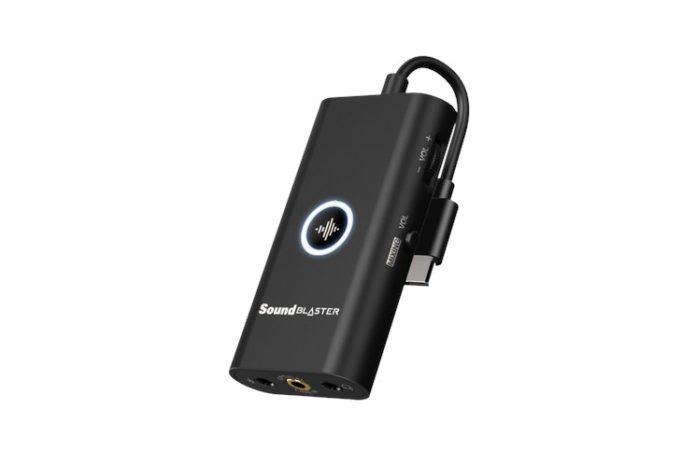 With USB Type-C getting more popular as an audio interface, there’s a growing need for external DACs. USB-C to 3.5mm “converters” are popping up everywhere, and where there’s a market there’s a high-end market. The Creative Sound Blaster G3 is a gaming-focused USB-C DAC and amp that’s plug and play on both the PS4 (with a passive USB Type-C to Type-A adapter) and the Nintendo Switch. Audiophile-grade headphones are supported with an ability to drive up to a 300 ohm impedance.

Most noticeable in the center of the Creative Sound Blaster G3 is a great big button with a light around it.

This button activates Creative’s “Footsteps Enhancer”, an EQ setting that aims to make footstep noises louder in games where that gives an advantage. The EQ is customisable and features profiles for games including Fortnite, CoD: Infinite Warfare and Overwatch. This feature is platform independent and works on PS4, Switch, Mac and PC.

Looking at the ports, there are three ports – the expected headphone and mic jacks, but also a 3.5mm combination optical and line in.

This port lets you give the Sound Blaster G3 two audio inputs: one from USB, and one from either analogue line in or the included digital optical cable. This is what enables Creative’s “GameVoice” technology. I was wondering how GameVoice works when I first saw it – this is how. After following a multi-step configuration process detailed on Creative’s website, you can get game audio on the optical/line in port and voice audio over USB. This then lets the Sound Blaster G3 mix the two sources, and you can control this mix with the volume wheel in mixing mode. Unfortunately this feature isn’t supported on the Switch, but does work on the PS4 as well as PC and Mac.