The Enermax ETS-T50 AXE is one of those air coolers that has been around for a long time. Enermax consider the design proven and occasionally update it with minor revisions, such as an all-black version back in 2017. It’s a universal law that all things must tend towards a point of maximum rainbows, so Enermax are now embracing the inevitable, and have announced the availability of an ETS-T50 AXE with addressable RGB.

Despite the RGB, the ETS-T50 AXE ARGB series comes in two colours – white (ETS-T50A-W-ARGB) and black (ETS-T50A-BK-ARGB). The colours apply to the base, heatpipes, fins and fan frame. 5V Addressable RGB illuminates the fan itself, shining from the centre through translucent blades. No controller is included, but if the RGB is unconnected then a rainbow effect will appear powered by the fan connector. 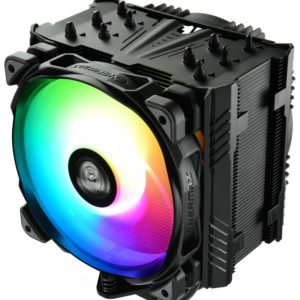 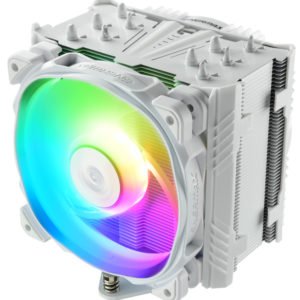 Like past ETS-T50 models, Enermax have a slew of fancy technology with fancy acronyms – PDF, VGF, VEF and HDT. PDF, or Pressure Differential Flow, is Enermax’s name for the cone-shaped bulges stamped into the fins, which help gently direct airflow. VGF, or Vortex Generator Flow, refers to ‘spoilers’ around the heatpipes. VEF, or Vacuum Effect Flow, refers to the closed sides of the heatsink that keep the airflow where it needs to be. Finally HDT is the one acronym not about airflow – Heatpipe Direct Touch is the fact that the base has exposed heatpipes.

VGF is particularly interesting and worth a brief digression. If a heatsink has flat fins and a slow fan, the air going through them can end up in a “laminar flow”. This means the air between fins is just going in a straight line, and the air that goes through the middle of that space doesn’t actually interact with the fins. By adding the spoilers, enermax break the airflow up and create “turbulent flow”, where the air moves chaotically. Turbulent flow sounds messy, but it makes sure all the air interacts with the fins and makes the cooler more effective as a result. 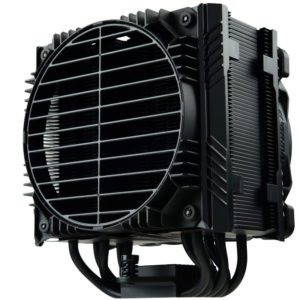 A final feature worth highlighting is the “air guide”, a set of positionable vanes on the back of the cooler. Enermax suggest this can aim the airflow towards outlet fans, but it would also conceivably provide a way to improve VRM cooling when aimed at the motherboard.

You can read more and see full specifications for the ETS-T50 AXE ARGB on the Enermax website.

The ETS-T50A-BK-ARGB and ETS-T50A-W-ARGB are available in the US from Amazon. Amazon UK has a listing for the black model but it’s unavailable at time of writing, you can always use this search link as they should be in stock soon.