For the fourth and final day of the Thermaltake Expo 2020, TT are focusing on peripherals. There are headsets, mice, keyboards and an RGB headset stand among others. But perhaps the biggest news, certainly physically, is that Thermaltake are introducing a new desk. Yes, the desk also has RGB. 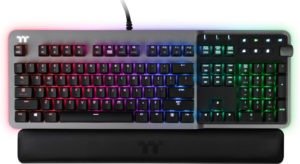 The Argent K5 RGB Keyboard spearheads a new look for Thermaltake, with an aluminum faceplate and a “space gray” design. A metal scroll wheel on the top right complements the look, and provides both volume control and a mute button.

Users will no doubt want to know about switches. The Argent K5 RGB comes with a choice of Cherry Blue or Silver mechanical switches. This means users can opt for either clicky and tactile feedback, or fast actuation.

In terms of RGB, the extensive LEDs are arranged to provide both 360 degree underglow and illumination under the floating keycaps. The underglow comes with 14 prebaked effects and the keys with 13. Alternatively, both can be customised through Thermaltake iTake engine.

The Argent M5 RGB wired mouse has a similar underglow effect to the K5 above. Featuring an ambidextrous design, the RGB lights on the scroll wheel and the TT Logo also aim for balanced aesthetics. Specs include fifty million click OMRON engineered switches and a 16,000 DPI pixart PMW-3389 optical sensor.

The Argent M5 Wireless drops the underglow lighting – presumably in an act of mercy towards battery life. RGB effects remain for the scroll wheel and the TT logo like its wired cousin. The ambidextrous design remains and features are similar, though the wireless version trades the optical sensor for a pixart PMW-3335. Connection is possible over 2.4GHz, Bluetooth 5.0 or directly over USB even while charging. Battery life with RGB enabled is 36 hours on 2.4GHz or 52 hours with Bluetooth. Disabling RGB extends this to 100 and 200 hours respectively. 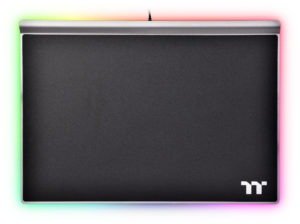 RGB mousepads are a thing that exist, and Thermaltake’s latest is the Argent MP1. An aluminum baseplate, non-slip rubber base and an optimized surface make this very much a mousepad. Dimensions are 370mmx350mm with a 7mm thickness. RGB lighting runs around the side of the baseplate, creating a similar halo effect to TT’s other various RGB peripherals. 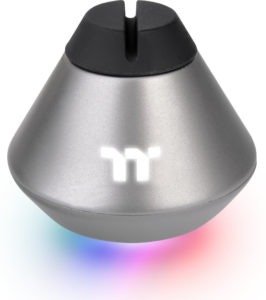 Mouse bungees exist to guide mouse cables, making sure you can use your entire gaming surface without tangles. And if it exists, the RGB industry must touch it. Thermaltake’s Argent MB1 has a half-droplet shape and “space gray” color finish, with a ring of RGB LEDs around the non-slip rubber base. 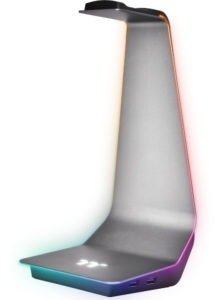 The Argent HS1 RGB Headset Stand continues the “space gray” theme, with an aluminum frame and a non-slip rubberized base. The strip of RGB LEDs around the edge comes with eight prebaked effects and can be customized through TT iTake gaming software. There are also practical features, with a two-port USB 3.0 hub and a 4-pole 3.5mm audio jack. Finally, at the back of the headset stand there’s a cable holder to reduce clutter. 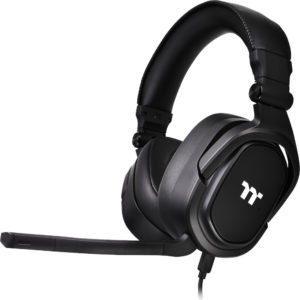 The Argent H5 stereo, the only model free of RGB, features 50mm Hi-Res drivers that aim for ultimate sound performance without distortion. For comfort, the headset features a fifteen-level adjustable headband. The Argent H5 stereo is also designed for portability. The bi-directional microphone is detachable, the ear cups can swivel inward, and it features a generally lightweight design. 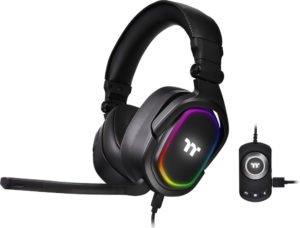 In addition to the features mentioned above, the Argent H5 RGB surround gains a ring of RGB on each ear cup, plus RGB illumination on the TT logos. The 50mm Hi-Res drivers are augmented by DTS Headphone:X v2.0 virtual surround sound. It also has an in-line controller to adjust the balance between game and chat sound sources, surround settings, and microphone settings. 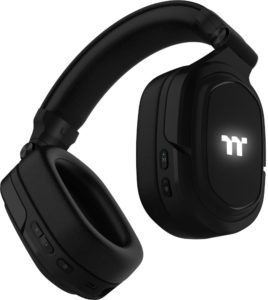 The Argent H5 RGB Wireless uses 40mm Hi-Res drivers and DTS Headphone:X v2.0 surround sound. Lossless 2.4GHz wireless audio aims for great sound performance and low latency while going wireless. Like the other Argent H5 headsets portability is ensured by a detachable microphone, ear cups that swivel inward and a lightweight design. Controls for sound, voice, and the inevitable RGB lighting on TT logo are situated on the back of the cups.

All of the Argent H5 headsets are multiplatform ready. This means support for all major consoles alongside PC, mac and mobile. 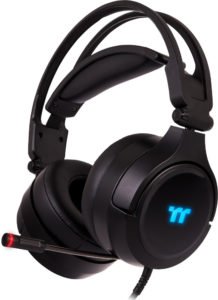 RGB lighting on the mic and TT logos works once again with Thermaltake’s iTake engine software, which also operates the 7.1 virtual surround sound. Lighting effects can also be synced with TT RGB PLUS, Razer Chroma and Amazon Alexa. 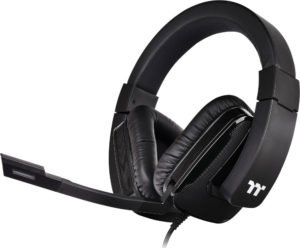 The Shock XT 7.1 Gaming Headset is another with 50mm drivers and 7.1 virtual surround. This time though, the RGB industry has not yet reached it. The headset comes with a USB audio control box that also acts as an external sound card. On the control box, you can adjust 7.1 virtual surround sound, preset EQs, volume and microphone mute controls. The padded ear cups are foldable for easy storage, and the mic can flip up to save space or get out of your eye-line. Finally, the headband is adjustable with 8 positions.

Thermaltake also offer the Shock XT Stereo Gaming Headset. This also features 50mm drivers, but drops the virtual surround. The controller is also updated, with simple volume and mic mute controls and a 3.5mm rather than a USB interface.

Both of the Thermaltake Shock XT models work cross-platform, covering PC and mobile as well as all major consoles. 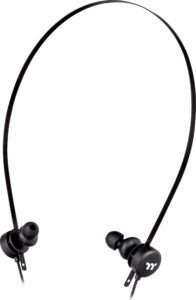 The Isurus Pro V2 In-ear Gaming Headset is a new member of Thermaltake’s Isurus series. No 50mm drivers here – being an in-ear headset it features a 13mm driver. The in-line control box provides volume controls, play and pause functions, and a microphone mute control. The headset comes with two additional sets of ear-tips in different sizes, and an optional steel-reinforced adjustable headband.

Despite appearances the Isurus Pro V2 does have a microphone, built into one of the earpieces. This makes it a complete headset despite the in-ear design. A 4-pole 3.5mm jack (adapter included for separate mic and playback plugs) ensures good cross-platform compatibility.

The Argent K5 RGB Mechanical Keyboard is due in July, at £179 for Blue switches and £189 for Silver.

A final Argent product due in July is the HS1 RGB Headset Stand, at £89.

The Argent H5 Headset Range has a staggered launch, with the basic H5 Stereo model due this month for £64. The H5 RGB surround wired is coming in August at £109, with the wireless version in September for £129.

Those after a RIING Pro RGB 7.1 headset will find it starting this month, at a price of £94. The Shock XT Series is also due this month at £44 for the Stereo and £54 for the Surround version.

If an in-ear gaming headset interests you, the Thermaltake Isurus Pro V2 is coming out this month at a cost of £39.

Finally, the Thermaltake ToughDesk 500L RGB Battlestation Gaming Desk. This massive product is coming out in August, at a cool £1,399. Thermaltake also have a smaller desk coming out this month in the form of the ToughDesk 300, announced earlier this year, which drops the side table but keeps the RGB and costs £849.

Bo Pedersen - Sep 15, 2016 0
The Playkey Service Provides High-Powered Technology For At Home Gamers London, UK, 15th September 2016 – Gaming as we know it is about to change,...
Go to mobile version
%d bloggers like this: