Hey folks I am back again submitting my ears to another headset test.

Creative, decades of experience in the computer audio business, along with other peripherals over the years, I remember them mostly for their early sound cards in the 90’s and later on award winning speaker systems.

One of Creative’s latest audio products has wrapped itself around my ears in the form of the Sound BlasterX Pro Gaming H5 Tournament Edition headset.

Xbox One™ via 3.5mm 4-pole audio cable (With Xbox One Stereo Headset Adapter)

Full Spectrum eh? We’ll be the judge of that, but first.

We are met with a sturdy box capable of housing a headset with some room to spare. The Sound BlasterX Pro-Gaming H5 Tournament Edition is pictured from it’s left hand side view with some marketing on the box about upgraded drivers, mic and a sleek look. There is also a mention of an award winning sound signature, happily bragging about the audio quality of this rather expensive gaming headset. Some compatibility notes finish off the front of the box. 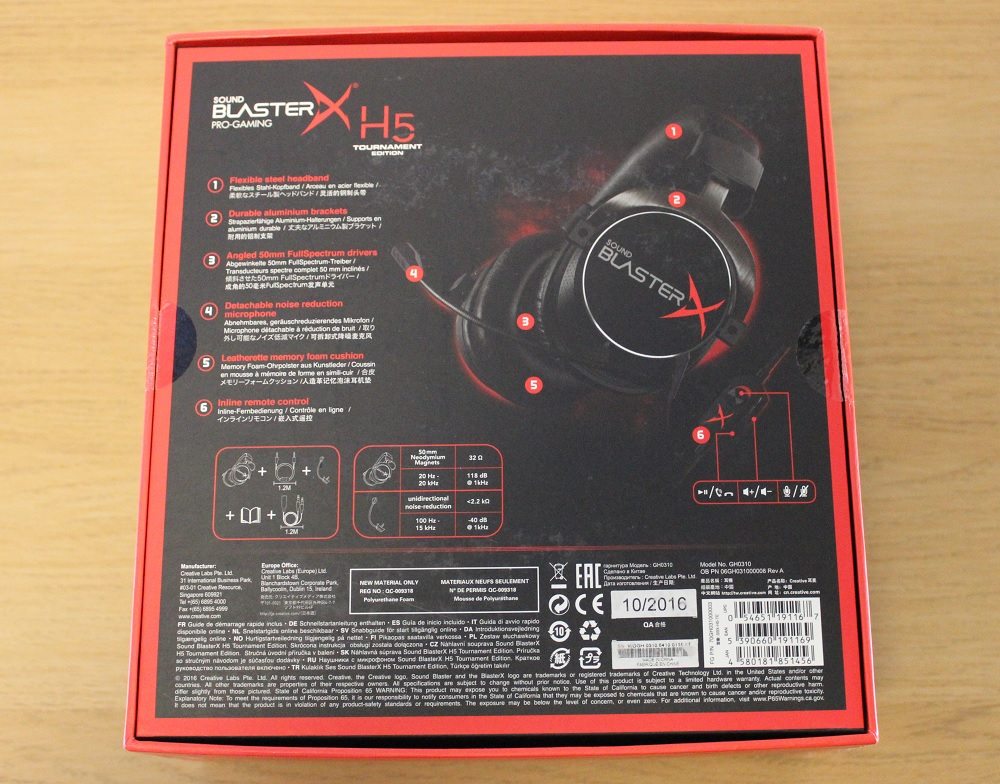 The back of the box contains quite a bit of information, this is split into four languages but we get some specifications on there along with some points of interest regarding the headset design and capabilities. The bottom part contains company and product information such as part numbers etc. 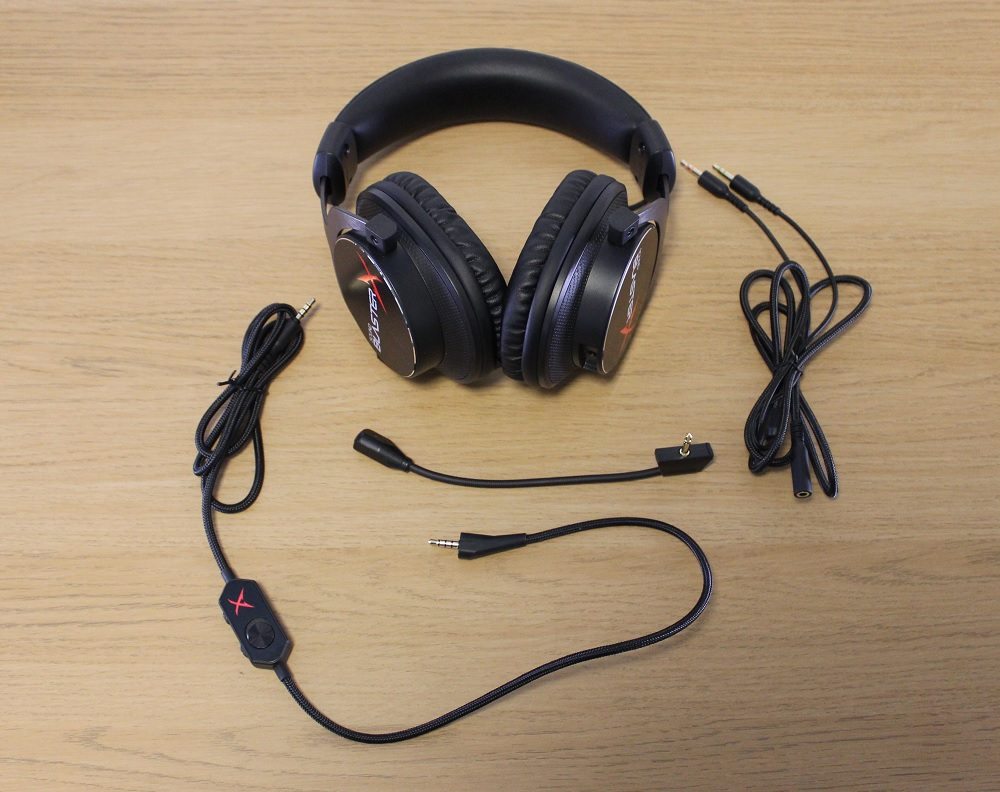 Unpacking the box we have the various headset components laid out for all to see. The Sound BlasterX Pro-Gaming H5 main unit, a quality braided connector cable with an in-line control featuring a mic on/off switch, a volume slider and a media button which functions both as a play/pause and a call answering button if the headset is plugged into a phone. There is an extension cable converting the combo jack into two separate mic and audio jacks, doubling the 1.2m length of cable to 2.4m essential for reaching audio ports on a PC that may not be right next to the user. Finally we have the microphone, this has a custom block connection although I think you could fit a standard mic cable in the receptacle. It is possible to plug the microphone in both directions should you desire, albeit with some working around the audio cable. 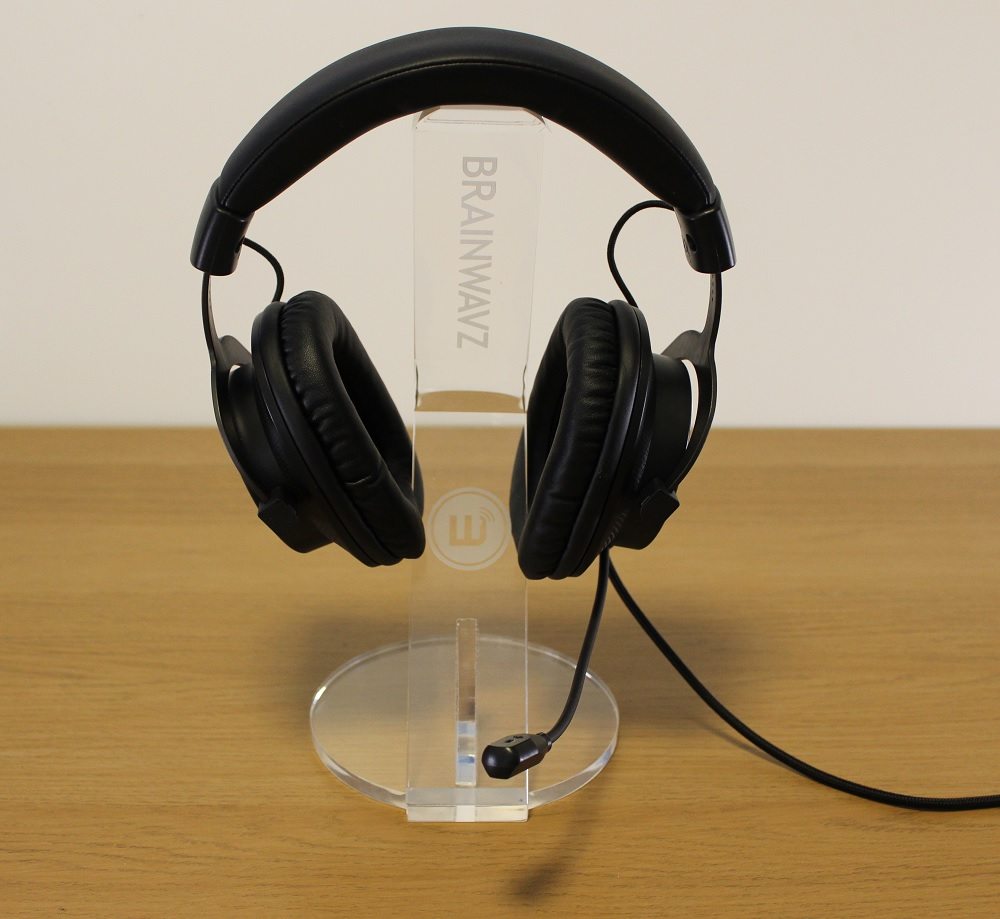 Popping the Sound BlasterX Pro-Gaming H5 Tournament Edition on the stand we get to see a nice familiar headset shape, large oblong earcups and thick wiring, the microphone is fully adjustable on it’s posable wire. The earcup material is very soft faux leather onto plastic driver cups with a metal backplate. Inside each earcup is where the L & R is printed for headset orientation. 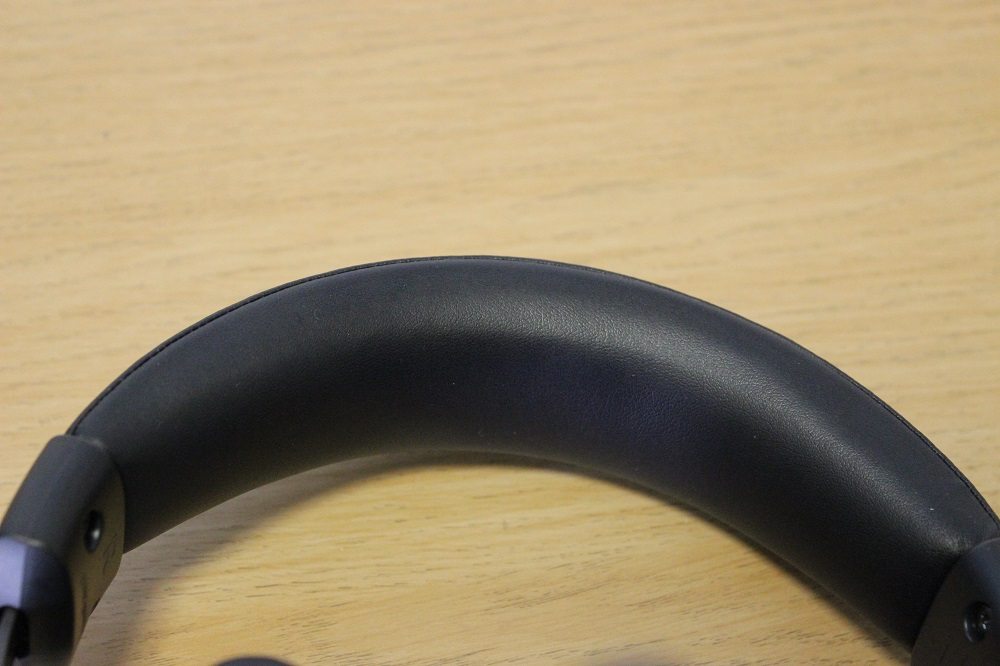 Looking more closely at the headband, we find it covered in the same faux leather as the earcups, it is very well cushioned with a strong metal arch going through the middle to hold it together. 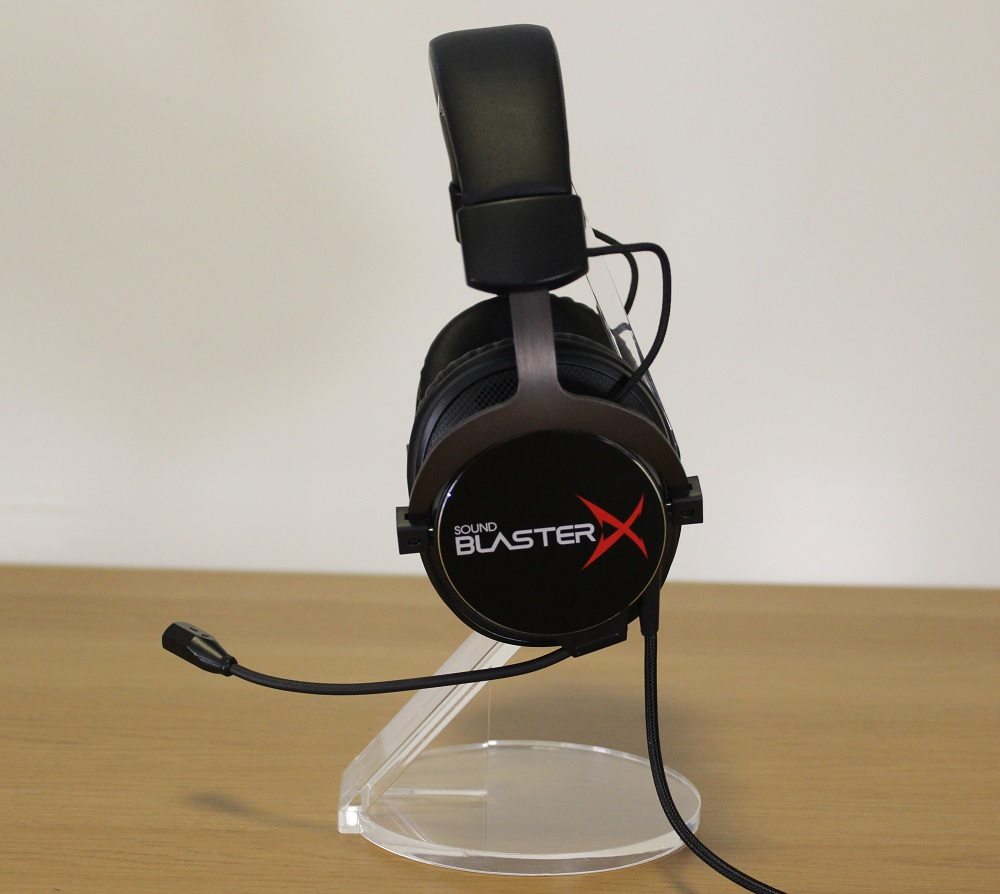 On the left hand side of the headset we can see the metal backplate emblazoned with the Sound BlasterX logo. The sturdy metal driver brackets are a brushed aluminium style, they are thick and sturdy and well attached to the rest of the headset. The left driver is where the audio cable and microphone plug into, you can see the microphone has a good extension on the wire giving a very good positioning around the cheek and mouth. 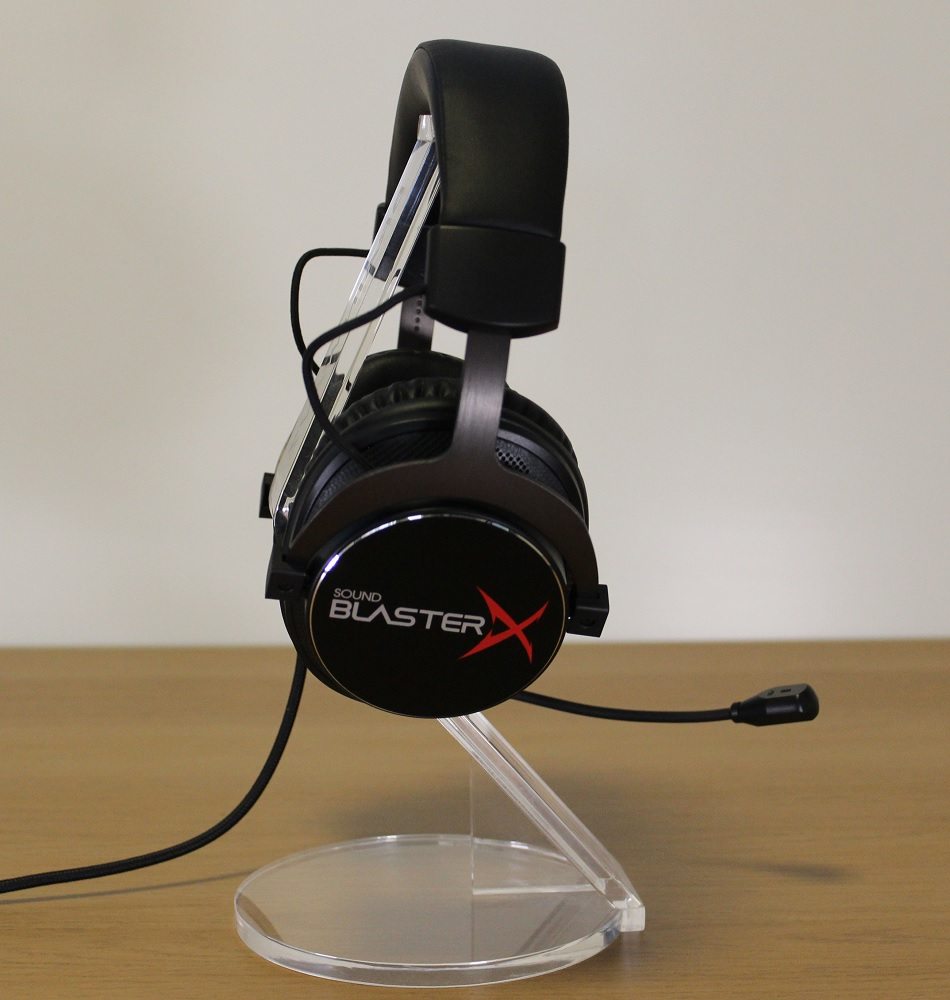 Spinning the headset around to the right and the same design is repeated, with the exception of cable and microphone connections. The build quality of this headset is admirable, solid materials do give it a little weight, but it’s not too heavy. The Sound BlasterX Pro-Gaming H5 Tournament Edition is definitely built to last. 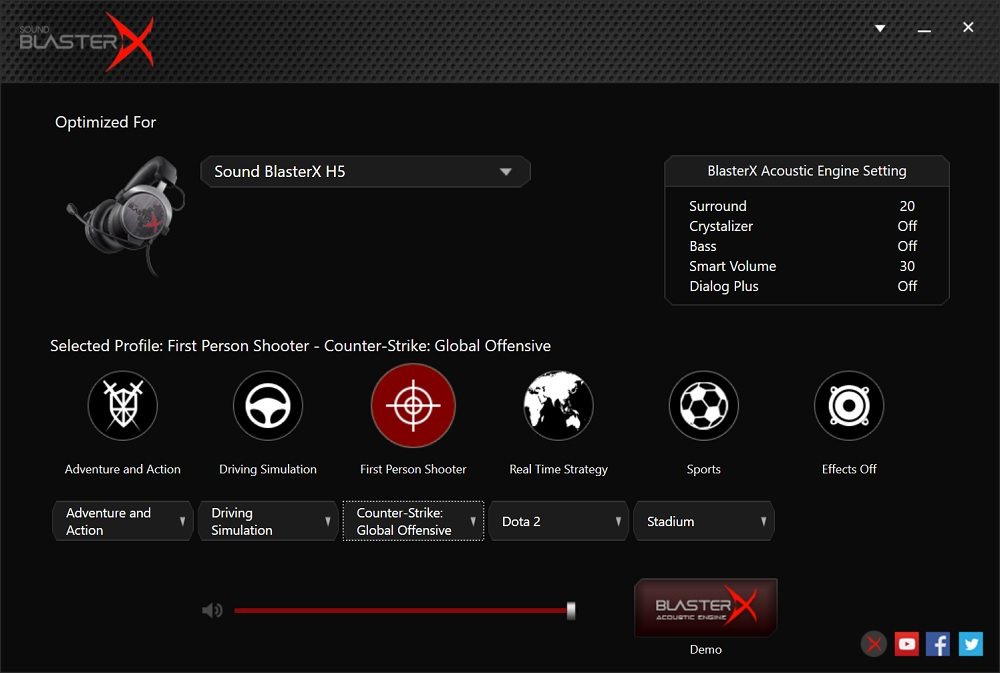 Now we get to the software for the Sound BlasterX Pro-Gaming H5 Tournament Edition. This was not a pleasant experience and I will start with installing the software itself. Upon finding and downloading software the installation asked me for an activation code, why on earth would something like that be needed for a headset driver that is written for that specific device. I had to register with the site and wait for an email that could take up to an hour for an activation code, just for headset settings. This is no way to treat a customer these are bespoke drivers for Creative equipment, if you are downloading these you have paid for a product and with it any drivers that would be used with it. One thing to note here too is that you get the LITE version of the BlasterX Acoustic Engine software, this presents us with a problem with the box marketing. The BlasterX Acoustic Engine Lite software only has a limited selection of profiles, these are for game times with a one or two game configurations in each category, you can turn the effects off, there is no option at all to create a custom profile, you are stuck with what they offer. The box claims bass boost is available on this headset, none of the profiles activate bass and you cannot manually switch it on in the software, this is at the very least misleading and limits the performance of the headset which I will get into in the performance and testing section up next.

The build quality of the Creative Sound BlasterX Pro-Gaming H5 Tournament Edition, is second to none, this is one seriously solid headset and I can imagine it will take quite the beating from being used and transported around to events and such. The headset weight certainly makes itself felt but it isn’t uncomfortable, the material used for the headband and earcups is comfortable and doesn’t get sweaty over prolonged use. The shape of the earcups is well designed to envelop the ear stopping pressure from the firm headset grip hurting any parts of the ear. The cable is a quality braid and with 2.4m in total there is a decent length to route the wire around to your audio ports. So we have gone for the build and comfort lets see how it performs with audio.

Clarity is the name of the game with this headset, sounds are clear and defined, with the exception of bass, this appears to be stifled when compared to other headsets in this price range. Going through some of my favourite glitch hop and breaks tunes I could pick out individual parts just fine but it did feel lacking at the lower end. With the software not allowing EQ controls I had to resort to EQ’ing the bass I wanted in using media player software, this is not as good as doing it through a driver but did prove that the Sound BlasterX Pro-Gaming H5 Tournament Edition has more to offer sonically.

During chat mainly in Discord my microphone came through very clear, it was so loud I had to turn it down a little to stop some echo, this meant I had a large spectrum of adjustment on the microphone. During FPS games such as CS:GO I could hear footsteps and other sounds absolutely fine, very clear indeed, this was regardless of using the presets in the software, which was disappointing, I was hoping for noticeable differences between the profiles, I ended up turning it off, since the lack of customisation for other games such as Overwatch left the preset system a little useless for me. Bass was again lacking in some games where explosions feature heavily such as Battlefield 1, and engine sounds lacked a little grunt in Project Cars.

Aimed at the upper midrange to base high-end, the Sound BlasterX Pro-Gaming H5 Tournament Edition, this package should be a serious contender.

With the 50mm drivers able to provide excellent clarity and range, it is disappointing to see this headset held back by its driver and accompanying limited software. Creative do a Pro version of the software but it is unfortunately not available for the Sound BlasterX H5. This is a serious shortcoming considering the excellent microphone and audio components used. Gaming was acceptable for the most part, but music was let down.

This is a very well built headset, using quality materials and a solidity that will no doubt stand the test of time. The comfort level leaves no complaints and the braided cable and in line audio controls are all well made and of high quality. With a sturdy quality microphone and a design just understated enough not to be too gamer, it is great headwear.

Available anywhere from £75 to £100 at the time of review this headset doesn’t come cheap, while it is well built and capable it is held back by an infuriating software and driver experience, not just with the audio bass quality but with the whole method of delivering the software. Someone spending this much money on a headset should not be expected to jump through hoops for software especially when the software is so severely restricted. This headset competes with some extremely well established units that offer more for the price.

I really wanted to give this headset a good run, I know it is capable of so much more due to playing around with EQ settings in my audio player, it is simply not acceptable to short change customers and this did ruin the experience for me, the Sound BlasterX Pro-Gaming H5 Tournament Edition manages a Bronze Award for the solid build. 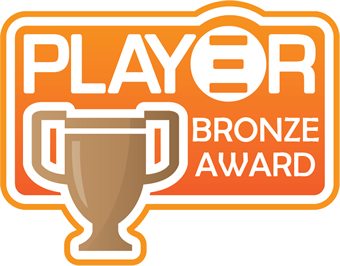 Play3r - Mar 24, 2014 0
the Geemarc CL7400 is a wireless pair of headphones designed for those who are hard of hearing. In the simplest terms, these are really quite loud - amplified - headphones more so than your usual ones would be.
Go to mobile version
%d bloggers like this: